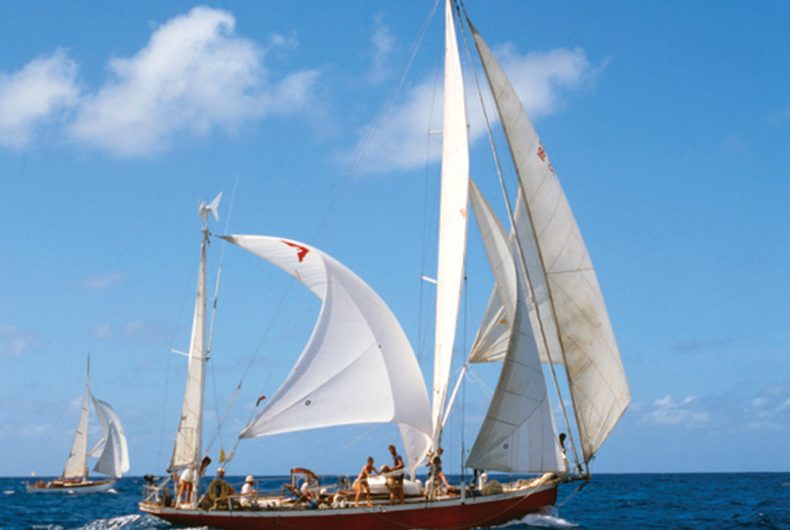 I heard glimmerings of this on the interwebs and immediately contacted Don, who obliged with a detailed release and obituary, most of which I’m publishing below. I don’t want my headline to confuse anyone. Iolaire, when she went down late last month after an accidental jibe off Ibiza, actually did not belong to Don anymore. After more than half a century of ownership, he sold her about 10 years ago. She had several notable owners over her long career (check this useful Classic Sailboats post for a full list), but Don was certainly the most notable and also owned her the longest.

I enjoyed the privilege of crewing aboard Iolaire in her last Fastnet Race in 2005, when Don was a sprightly 75 years of age and the boat was merely 100. You can check out this post here for a few details on that. Following Don’s release, I’ve posted a few extra photos from that voyage in memory of her.

On January 1, 1919, due to bad seamanship, the large steam yacht Iolaire, with over 200 servicemen returning from WWI aboard, hit rocks at the entrance to Stornaway harbour and sank with massive loss of life.

One hundred years and seven months later on July 26, 2019, the 89th birthday of Don Street, the 46-foot yawl Iolaire was lost on the NE coast of Ibiza, in Spain’s Balearic islands, after an unexpected jibe in heavy weather. It was the end of the boat’s brilliant 114-year career.

Don Street, who owned Iolaire for 52 years, purchased the boat in St. Thomas in March 1957 and realized that the big heavy main boom, left over from the boat’s gaff-rigged days, could be a real widow-maker in an inadvertent jibe. From the  earliest days, whenever sailing broad off, a main boom fore-guy/peventer was rigged. This was often a difficult job.

Detailed description and drawing of Iolaire’s preventer rig provided by Don to run with this release. He notes it is reporduced on the back of all Imray-Iolaire charts

Iolaire under her original gaff rig

This was obviously not rigged on July 26. At about 0200 hours Iolaire was sailing dead downwind along the NE coast of Ibiza when she inadvertently jibed. She headed inshore, hit rocks, and sank, ending a 114-year career of carrying sailors safely thru thick and thin. The owner/skipper and his partner got ashore in a liferaft.

Iolaire for 52 years carried Don Street, his family, friends, and various Grenadian crew safely throughout the entire  eastern Caribbean, seven times across the Atlantic, and eight times up and down the Thames River, all with no engine. Don cruised, chartered, and raced the boat. His explorations resulted in the Imray-Iolaire charts of the eastern Caribbean and the Atlantic islands,  plus hundreds of articles, three reference books, and his all-inclusive cruising guides to the Eastern Caribbean and the  Cape Verdes.

Iolaire was a lucky lady. In 1947 she was lying in the sub pens in Gibraltar waiting for owner and crew to arrive to commence a transatlantic passage to the Caribbean. A few hours after the crew arrived, a large surge developed in the sub pens. Despite the heroic efforts of Iolaire’s owner and crew, Iolaire lost 13 feet of bulwark and 8 feet of sheer strake. The owner, the late RH Bobby Sommerset, heir to the title of the Duke of Sommerset, was highly regarded by the Royal Navy, as he had served during WWII as a navigating officer.

The dockyard immediately organized shipwrights and teak to repair the damage so Iolaire could continue her cruise.

In 1959 Don Street resurrected Iolaire from the dead. She had been declared a total loss and was lying on the beach in Lindbergh Bay, St. Thomas, after her anchor shackle broke. Don bought her back from the insurance company for $100. He got her off the beach, put her on the West Indian company dock, and set up a shipyard!!! He replaced four frames, five timbers, a bilge stringer, eleven planks, and the rudder. He also installed a new main cabin interior and reinstalled the engine (a  big mistake). Iolaire was off on charter 13 weeks and three days after being wrecked.

In 1962 she was dismasted in the Anegada Passage, but Don managed to tow the mast into Norman Island. One there he lifted it on deck, powered back to St. Thomas, scarfed 12 feet of new wood on to the bottom of the mast, and was out on charter 11 days later.

In 1966 Iolaire lost the top 10 feet of her mast off Dominica. Don, his 4-year-old daughter Dory, plus a young Grenadian boat-boy, sailed Iolaire under jury rig back to Grenada, a distance of 200 miles, at an average speed of 5.2 kts. A bare aluminium tube was shipped to Grenada, fittings were transferred from the wooden mast, and a new rig was created by Street in Grenada. Iolaire was back sailing two months after her mishap.

In 1984, Iolaire was caught by the late November hurricane Klaus. This was only the second hurricane since 1851 to have formed in the eastern Caribbean and headed NE. Iolaire was anchored on the north side of St Martin. She survived lying to six of her seven anchors.

In her 114 years Iolaire safely carried her crews thru fog, light and heavy winds, and more gales than anyone can count. Of her Don says: “For 52 years I lived on Iolaire, I camped out when on shore!”

The spirit of Iolaire will live on. If you visit the Royal Ocean Racing Club on the wall of the second-floor landing you will find a half model of Iolaire, which carried the RORC flag from the club’s founding in 1928 until 2009. Below the model are photographs of Iolaire under five different rigs with short notes on the various RORC members who owned her.

Iolaire on a mooring at Cowes, prior to the start of the 2005 Fastnet Race

Ghosting down the Solent after the start, with Emma Richards and crew aboard Pindar overhauling us

Don on the helm after the start

Looking west down the Solent

Later in the race. It was a drifter!

After Don sent me his release, I asked him if at age 89 he was still firing on all cylinders. He responded: “I am like the old WWII Wright Cyclone radial air-cooled engine that could absorb bullets and still run on 14 of its 16 cylinders! Still racing Gypsy, my 86-year-old Dragon, the oldest Dragon in the world. At 89 myself I am now the oldest Dragon sailor in the Northern Hemisphere.”

More power to him!