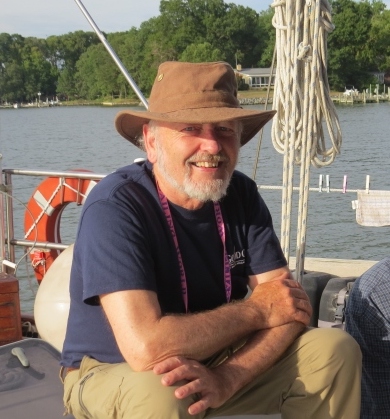 I’m just back from a cruise down the coast (of which more later) and during said cruise received the very sad news that yet another old sailing friend has passed on. I first met Mac when he was living with Nim Marsh in Middletown, Rhode Island, back in 1993. He was lying low back in those days, tinkering with a brilliant invention for removing grease from homemade soup as you cooked it. This being one of many hats he wore through a varied life. Others included yacht designer, boatwright, magazine editor, writer, and probably a few others I never knew about.

I will be forever in Mac’s debt for all the time he spent with me in early 1995 designing and building a new engine box for my first offshore boat, Crazy Horse. Before that decade was finished we also worked together on staff at Cruising World magazine as fellow assistant editors. Later he also worked as senior editor at Good Old Boat, where he edited at least one story I wrote for publication there. He had an encyclopedic knowledge of sailboats, through most every detail of their design and construction, and of the industry generally, but was never proud or assertive about it. He was instead always self-effacing and reserved, but with a quick wit and charming countenance.

I seem to recall that Mac worked as a designer with Nicholson in the UK before emigrating to the US. I know for a fact he worked with Rodger Martin on Mike Plant’s Coyote, an early Open 60 design, as I once discussed the project with him at some length. Indeed, it warmed my heart when I spotted him in the film Coyote, a recent documentary about Mike Plant, whisking a large drawing of the boat across Rodger’s office.

Mac died earlier than he should have, aged just 71, of a melanoma, and saw the reaper’s blade well before it reached him. He was ill last time we spoke, in Annapolis last fall, but was characteristically sanguine and dismissive about his ailment. He was, as always, cheerful and ever ready to talk about boats.