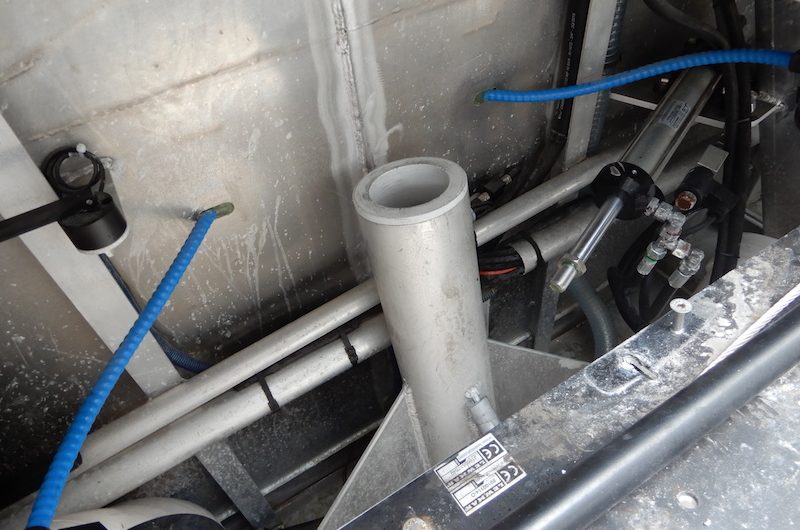 We sailed over to Popham Beach for the holiday, as has been our habit the last several years, to visit friends and family, but first there was the rudder to attend to. Or rather the steering system, as there were other problems the crew at Maine Yacht Center discovered when they took everything apart and dropped the rudder. In the photo up top you see the top of the rudder tube with the steering quadrant removed and a new top rudder bushing installed. It turned out both the old bushings, top and bottom, were worn and needed replacing.

We also learned there perhaps had never been anything holding the bottom bushing in place, which would certainly help explain why it fell out of place. Boréal informed me it had been secured with Sikaflex, but we found no evidence of there having been any adhesive on the original part.

New bottom bearing installed, glued in place with Sikaflex. I’m wondering how well this will hold, given Sikaflex is really designed for bedding portlights and such, but, as Brian Harris of MYC noted, this adhesive is better than “nohesive”

The surprise issue, for me, was the steering quadrant. When the boat was delivered to me in spring 2017 in France, the crew at Boréal specifically pointed out that the pin securing the autopilot ram to the quadrant was a bit loose and told me I should leave it like that. Unfortunately (insert dope-slap here), I didn’t ask any questions about this advice, having never had a boat before with a belowdeck autopilot connected to a quadrant. It may not have been such good advice, as it seems the pin (which wasn’t actually a pin, but a bolt with threads that behaved like teeth in this application) badly chewed out and ovalized the hole in the quadrant that it was wobbling around in.

The quadrant, after repairs, with a new heavier bushing in the once ripped up hole to receive the autopilot pin, which is now a proper pin instead of a threaded bolt. The hand belongs to famous hand model Will Rooks, who moonlights as the MYC shop foreman. Not shown in this shot is the rudder stop on the other side of the quadrant, which was broken and a bit small and is being replaced with a larger heavier one

While confabbing with the guys about all this, I was very surprised to see another Boréal, a 44, had come into the MYC docks with… yes… another flooded engine. This was a boat named Quid Non, with its owner Nigel aboard. His boat was launched in France in January of last year, and he had recently sailed over to New England singlehanded.

Unfortunately, Nigel wasn’t as lucky as me. He managed to start his engine with water in it, which caused all sorts of terrible damage. I forgot to take his picture when I first met him, but consoled myself with the thought that he would surely still be at MYC when we returned from our little weekend holiday jaunt. Only he wasn’t! After what MYC service manager Jeff Stack described as a bit of “backyard Frankenstein” magic their engine guy Michael Start managed somehow to get Quid Non’s Volvo engine running again, in spite of not having all the needed parts, so that Nigel could take off cruising with friends who’d flown in special from New Zealand.

I hate to admit it, but I am feeling some vindication here. The guys at Boréal never paid much mind to my flooded engine and treated it as a freak phenomenon that had little or nothing to do with them. I’ll be very curious to learn how they react to Nigel’s problem.

UPDATE (July 13): Revisiting the yard at MYC yesterday I found they had figured out exactly how Nigel’s engine flooded. Someone working on the boat at some point after Nigel took it away from Boreal connected the top of the vent line from the dripless prop shaft seal to outlet on the vented loop on the intake line. As the guys at the yard put it: an act of terrorist plumbing! Looking at the arrangement on my boat I can see how some thoughtless person might think these two bits should be connected, if they had no idea what they were for.

As for our holiday, we had a nice but slow sail from Portland over to Popham, where we spent a day and half hanging with my brother Peter and some of his extended family. This included opportunities to recall some old family Popham lore. For example:

Small bell shack jutting off Fort Popham, with house on Gilbert Head across the Kennebec River in the background, as painted by my grandfather in 1945

Remains of the structure that once supported the bell shack off the fort, as seen last weekend, with house on Gilbert Head in the background. The lore being that my father was visiting my mother’s family in that house when my folks first started going out, in the late 1950s, and was standing in the living room gazing across the river when he saw the bell shack get struck by lightning and destroyed

From Popham we ambled over to Southport, on the east side of the Sheepscot, next river east, to visit our old friends Jenny Bennett and her daughter Eleanor, who had recently moved there.

Lighthouse in Southport, with intact bell shack, not yet destroyed by lightning

We had Jenny and Eleanor out to the boat for dinner, arriving at the boat by dinghy just in time to avoid getting caught in an enormous thunderstorm.

The thick blanket of fog that descended immediately after the thunderstorm. Only in Maine do things like this happen

Jenny and Eleanor (left and center) in Lunacy’s saloon. They seem a bit disappointed at not having been struck by lightning

Finally, come Sunday, we had to head home again.

The rudder, I’m pleased to report, was solid as a rock throughout.