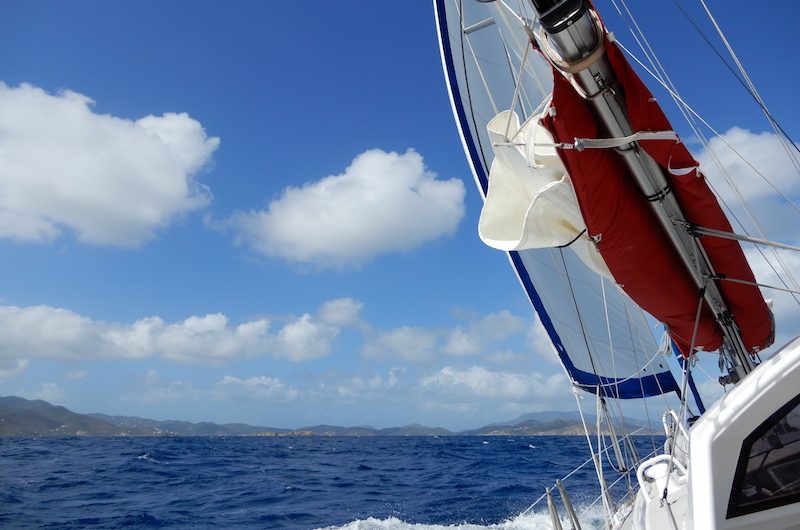 On flying into St. Thomas on the third Sunday of last month Clare and I were pleased to find Lunacy resting peacefully in her slip at the Crown Bay Marina in Charlotte Amalie. We were not so pleased however to discover that she was covered in a thick layer of grimy soot. This had come from the very large diesel-powered forklift that is forever trundling up and down the container ship dock just upwind of the marina. We were even less pleased on Monday when we went into the office to the pay the bill. This was, bar none, the most expensive marina I’ve ever stayed in, and also the dirtiest and noisiest. When we complained they did at least delete the charge for all the water I used trying to scrub the boat clean again, but it was a small consolation.

Much more consoling were the various boat folk with whom we confabbed. We found a nice Irish yachtsman down the dock for Clare to relate to. I got to have a fine chat with my fellow SAIL contributor, Phil Gutowski, who’s been working as a boat tech in Charlotte Amalie through the winter while living on his boat Eclipse. Plus we had a random encounter with another Boréal family! I’d given new owner Jon Schwartz some advice via e-mail a while back and was pleased to see him and his two boys pull up alongside Lunacy in their dinghy. Finally I also got to meet John Stone, a WaveTrain rider who sails a very cool engineless Cape Dory, name of Far Reach, who I’ve been swapping messages with for some time.

As Clare noted, it’s almost like we’re notorious or something.

Spotted in Crown Bay Marina: this cool wingsail catamaran Eagle, homeported in St. John, according to her transom

Jon Schwartz and his two boys, Ronan and Daxton, with a copy of The Sea Is Not Full. They obviously have good taste in literature!

In spite of all this happy society, we were happy to get away from the grime and noise of Crown Bay. We anchored out off the main town for a night, marveling at the coming and goings of the cruise ships, then next day slogged across to St. Croix on a lively close reach.

I’d not forgotten how confusing the harbor at Christiansted can be. The last time I was here I didn’t have a chartplotter to guide me in, and I ended up anchoring on top of a small wreck

View of the harbor from atop Fort Christiansvaern, which was built in 1749

A Seaborne Airlines seaplane approaches its dock. There are several flights a day back and forth between Christiansted and Charlotte Amalie. Quite a bit faster (20 minutes) and smoother than sailing over

Presumably a storm-related incident. Hurricane Maria tracked right over St. Croix in September 2017. What I couldn’t figure out was how the catamaran got inside the fence

I really enjoyed Christiansted. Unlike Charlotte Amalie its colonial architecture isn’t obscured by any veneer of cruise-ship shopping hype and it still defines the look and feel of the town. I particularly liked the old covered sidewalks. The last time I was here (back in the ‘90s) it seemed the restaurant scene was a bit sketchy (I recall being poisoned by some shrimp I ate), but now there are some excellent (if pricey) restaurants where you can eat genuinely fantastic meals.

After spending a full day and then some poking around here, we slogged back to the main VI archipelago–again on a bumpy, boisterous close reach—aiming this time at St. John. This was another place I hadn’t visited in a long time. Pulling into the anchorage at Coral Harbor, up in the northwest corner of Coral Bay, we were immediately struck by all the hurricane–ruined boats moored there. Most of them, we found, were inhabited by local liveaboards who are still struggling, bit by bit, to make their floating homes fully operational again.

Inevitably, perhaps, we also ran into people we knew. Or at least I knew them. I first met Roberta Marquis and Nathaniel Witschonke aboard their bright red steel cutter Solo Cup when I was in Norfolk last fall and was kind of hoping I might run into them again. They’re a fun-loving pair who normally run day charters out of Cruz Bay and stop by Coral Harbor whenever they can to recharge their batteries. If you’re in St. John without a boat and want to spend some time on one, you should definitely check them out.

Coral Harbor, viewed from on high. We spent a good deal of time hiking around the hills overlooking the bay. Look closely and you’ll see many of the sailboats in the harbor do not have rigs

Note the very creative re-rigging job on the ketch (now a schooner?) in the middle ground. That grounded boat in the background was just one of many

From St. John, unfortunately, we had to trundle back to St. Thomas (a lazy run under headsail alone) so Clare could catch a flight back to the real world. We spent our last night together at Christmas Cove behind Great St. James Island. I had thought we might check out the ‘za at the famous floating pizza parlor, Pizza Pi, which is moored there, but Clare could not overcome her prejudice against take-out food.

Pizza Pi, whose wares we did not sample

Sailing solo now I spent one long day running downwind wing-and-wing from Charlotte Amalie to Fajardo, Puerto Rico, where I slipped Lunacy into a berth at the Puerto del Rey Marina. From there I hopped in a rental car and took an island-length inspection tour. En route I picked up a spare Clare–Clare Allcard, widow of Edward Allcard—who flew into San Juan from Andorra. Together we also visited with Christina Pasquinucci, widow of Thomas Tangvald, and her family. Of course I had some ulterior motives here (some might call it research), of which more later.

During our road trip Clare, Christina, and I visited an old cruising couple, Claudia Medusa and Elm Van Pelt, who live in the hills overlooking Boqueron Bay, at the southwestern end of the island. Elm, among other things, taught Thomas Tangvald how to draw. This here is one of Elm’s paintings. He claims it is autobiographical

After our road trip I took Clare, Christina, her new partner Luis, and her two older boys out for a short cruise on Lunacy. We stopped first at the small island of Palominos, just off Fajardo, then sailed over to Vieques, where we anchored for the night off the main town, Isabel Segunda. This is the stylish lighthouse there, Faro Puerto Mulas

Clare Allcard aboard Lunacy, her first time sailing in the tropics in 40 years! If you haven’t already you should definitely read her book A Gypsy Life. A bluewater classic, IMHO

These are the boys Christina had with Thomas: Gaston (left) and Lucio (right), seen here learning to manage Lunacy’s tender. She’s had a third son with Luis, Leandro, who was born the day after Maria hit the island in 2017

About Maria: I’d say the damage I saw on this little cruise was less blatantly obvious than the damage I saw from Irma on St. Maarten and in the BVI. Some things were obvious, of course, like all the ruined boats in Coral Harbor, but for the most part just looking around I found it hard to distinguish between hurricane damage and the general sort of entropy and decay you so often see in the tropics. To understand how much damage was really done you have to talk to people. Hear some stories about not having electrical power for eight months, have someone walk their property with you and describe what it was like before. Meet with people who still can’t return to the homes they fled during the storm. Only then do you get a real sense of how much was lost and how much work needs to be done. 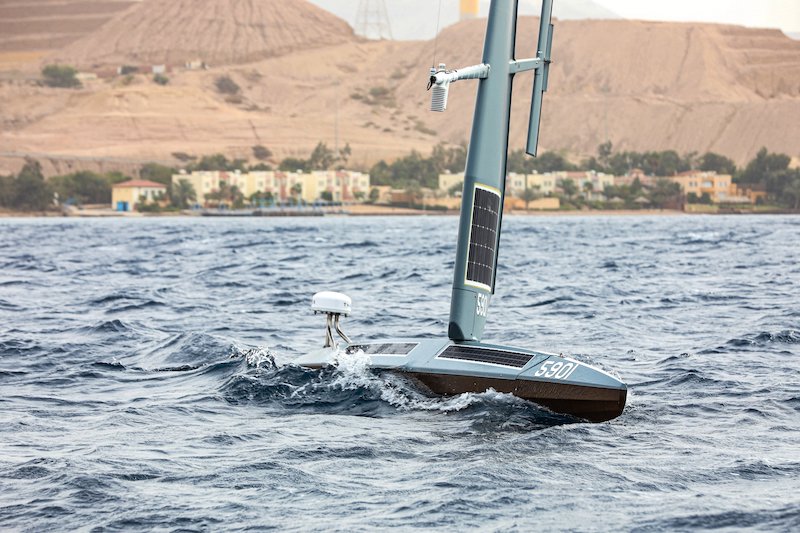