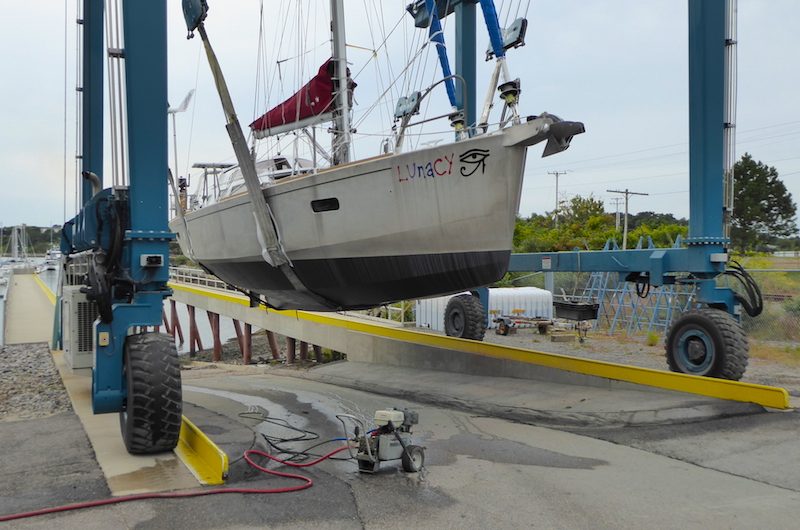 This truly was touch and go. I’d had the boat hauled in early September to attend to a fairly discrete list of chores: 1) put on fresh bottom paint; 2) have some nice handrails sent by my friends at Boréal welded on to the stern arch; 3) make sure the engine’s running gear was OK after that run-in with a pot warp. It was the last item, of course, that created problems.

Turned out that wrapped pot warp (remember?) had ruined the cutless bearing, and to change that out the prop shaft had to be pulled, and as long as the shaft was out: why not send it on to get it checked to make sure it’s still perfectly straight??? It made sense at the time, but it unfortunately took much longer than it should have. Then there was some head-scratching over Lunacy’s exotic Vetus transmission coupling after the shaft came back, and a missing shaft key, and before I knew it the guys at Maine Yacht Center were relaunching Lunacy (see above) the very morning I planned to take her away south to Annapolis to be in the show again.

Believe me, I was wondering why I ever agreed to this in the first place (hint: part of the answer involves those handrails). 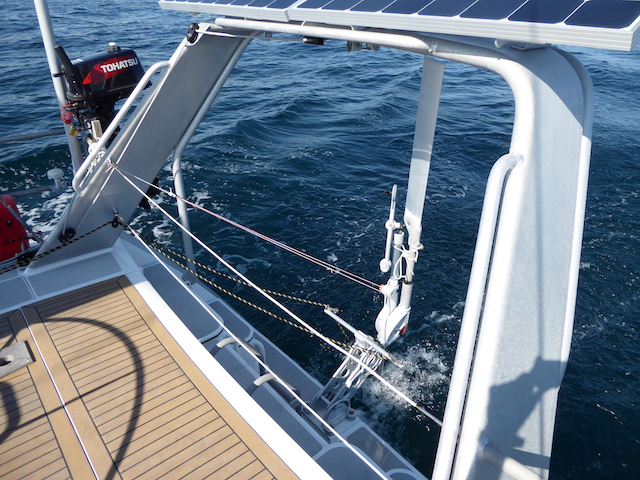 Aren’t they pretty? One thing I learned during the transatlantic last spring: you need something to hold on to back here! If you ever order a Boréal for yourself, please contact me before you decide not to check the box for the optional weird-looking backrest that can be installed behind the helm

A mere two hours after the launch–after my man Nathan first fiddled with this and that in the engine bay and we then test-drove the boat together to make sure the coupling was good–I was off solo through the only decent-looking weather window on offer that week for a fast trip from Portland to Portsmouth.

This was last Tuesday. We (that is, the boat and I) had fantastic wind, 23-30 knots from the southeast, flat on the beam. With one reef in the main, and eventually some headsail rolled up too, we were screaming! Made the 50 miles from Portland to Portsmouth in under seven hours (my fastest time yet, I think) and pulled into Little Harbor just before sunset. For which I was grateful when I saw how the big wind waves were stacking up outside the entrance there.

The next day was a passage prep day, thank God, as it was blowing even harder straight out of the south, which was exactly the direction I needed to go. A wind shift and some easing of the breeze allowed me to get out Thursday morning on another blast reach, full sail this time, straight down to Provincetown. 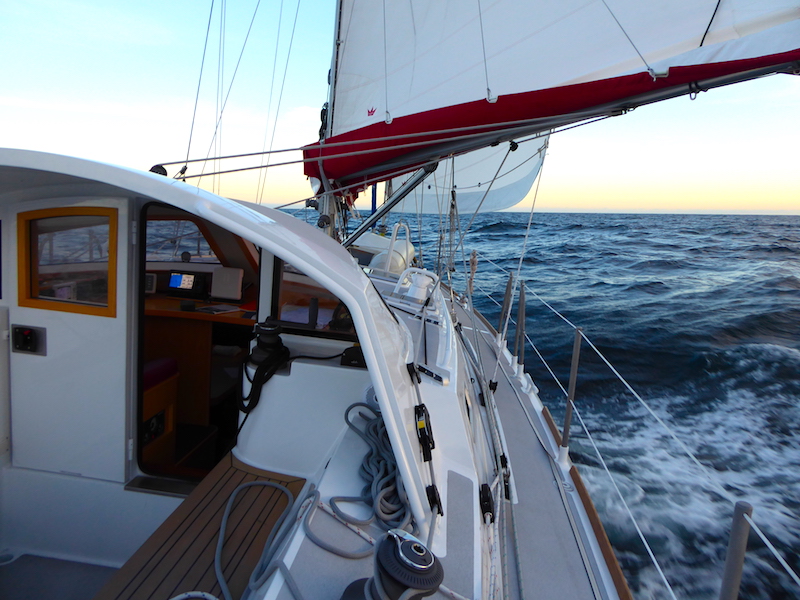 The road to P-town

I got in after dark, but not too late, and P-town, thankfully, is an easy place to get into in low-light conditions. The only confusing bit was the enormous new tower there–with a solid red light on top, seen from many miles away, taller even than the Pilgrim Monument–that was not shown on my recently updated e-chart. This, so my AIS eventually informed me, turned out to be a yacht, M5 (ex-Mirabella 5), reputed to be the largest single-masted sailboat in the world, at 277 feet long, resting peacefully at anchor, lit up like the proverbial Christmas tree. 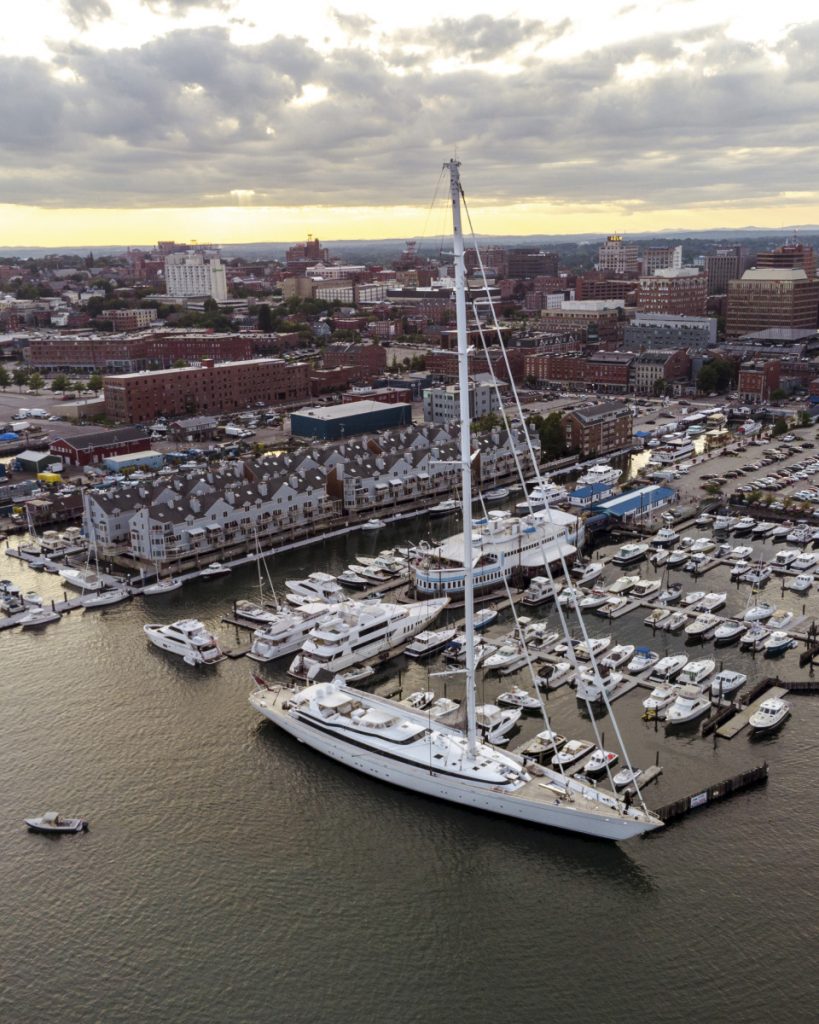 M5 tied up at DiMillo’s in downtown Portland. Too big to fit under the Golden Gate Bridge, and too big for DiMillo’s, apparently (Photo courtesy of Portland Press Herald)

I was eager to see her in daylight the next morning, particularly as I’d heard rumors she had ripped the front off DiMillo’s dock while tied up in Portland earlier in the month. But no! When I awoke early and leapt naked out the companionway with camera in hand to take her picture in the new front-page sunrise, I saw she was MIA.

So too was the breeze, or most of it anyway.

And this right here is the problem with doing deliveries. Not just to boat shows, but most any delivery. You have to be somewhere by date certain. It sure ain’t cruising. If the wind slows down, but you can’t afford to, you have no choice to but to turn on the engine. In this case, for example, I could have easily sailed slowly across Cape Cod Bay in the light-to-moderate northeasterly tailwind that presented itself that morning (and the light-to-heavy rainfall that came with it), but I was thinking days ahead, and how much easier those days would be if I made it to the Cape Cod Canal entrance just as the current turned in my favor in three hours time. 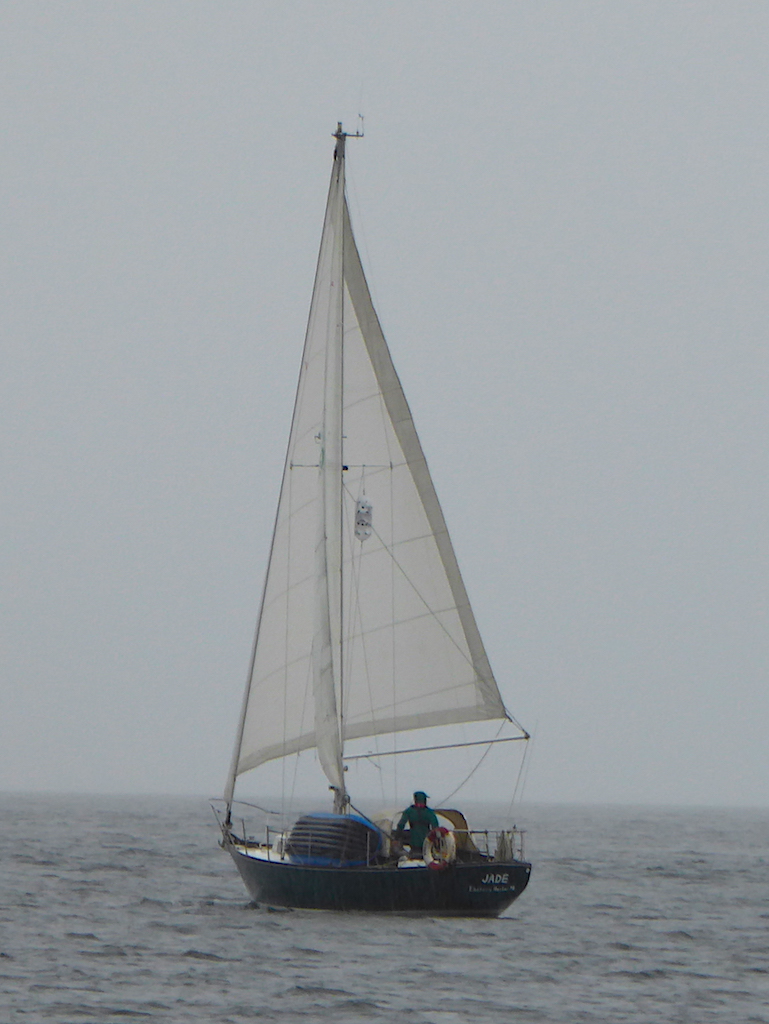 Boat seen sailing out of P-town same time as me, but in the proper way, wing-and-wing in the light following breeze with no prop turning

Ah, well. At least that same breeze became much stronger (and the rain went away) when I emerged out the west end of the canal into Buzzards Bay right on schedule. It was almost too easy. Unroll the jib, switch off the egg-beater, and I had a fast DDW sleighride under headsail alone all the way to Cuttyhunk. It was, alas, my last proper sail for the entire trip.

I got in before nightfall, which again proved fortunate. The moorings in Cuttyhunk’s outside mooring field, which are quite easy to pick up after dark, had already been staked for the winter, and it was now too rough and windy to moor or anchor out there anyway. I had no choice but to pick up a mooring inside the pond, for the first time in some 25 years, and while wending my way through the narrow, subtly twisting, in places alarmingly shallow creek that leads into it I realized it would have been much harder in the dark. 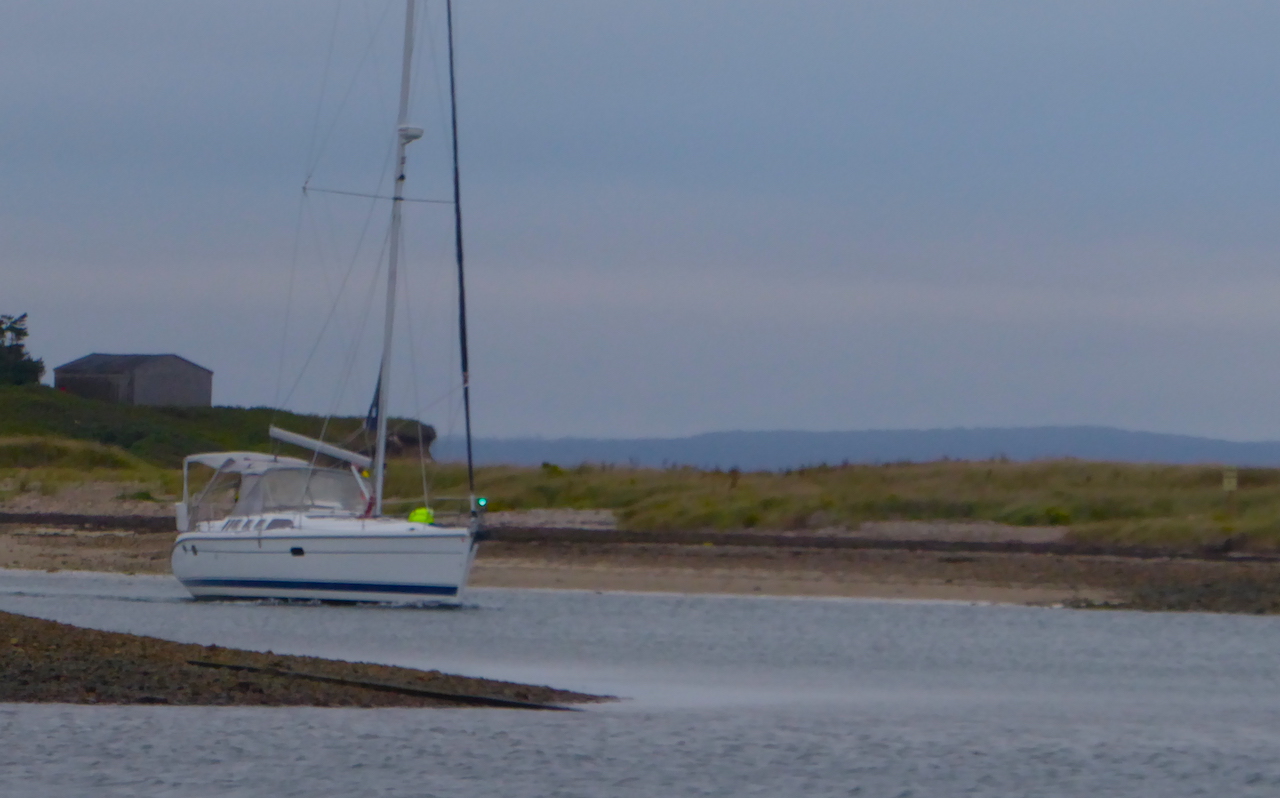 The last boat into the pond at Cuttyhunk that evening. When I first came here, back in the 1980s, there was a seaplane that landed and took off, on a schedule I believe, inside the pond, between the mooring field and the docks on shore. I shit you not. I even have pictures to prove it, and if I wasn’t writing and posting this in transit, I’d dig some out of the archive and show you

About the crew situation. Surely I wanted one. A magazine editor (who shall remain nameless) led me to believe he would likely do this with me, but then ghosted me. I scrambled at the last minute to find a replacement, but had no luck. I will confess a big part of me enjoys solo sailing. Another part–just as big, if not bigger–enjoys sleeping. And a trip like this, a time-constrained leaping down the coast, trying to dodge bad weather and heavy traffic, while taking full advantage of good weather, in any way possible, isn’t really sailing. It’s more like truck driving, and it’s far easier if you have someone dozing in that berth in the back of the cab who can take the wheel when you can’t keep your eyes open any longer.

I didn’t have the time to day-hop down Long Island Sound and through the city, but had to make a big leap offshore, Cuttyhunk to Cape May, some 235 miles, which meant driving all night and through two days, across the three sets of traffic lanes leading in and out of New York Harbor. Fortunately, I did have a weather window, not for actually sailing the route efficiently, but for not getting clobbered on it. That at least partly relieved the tedium of motoring 36 hours straight on my own. 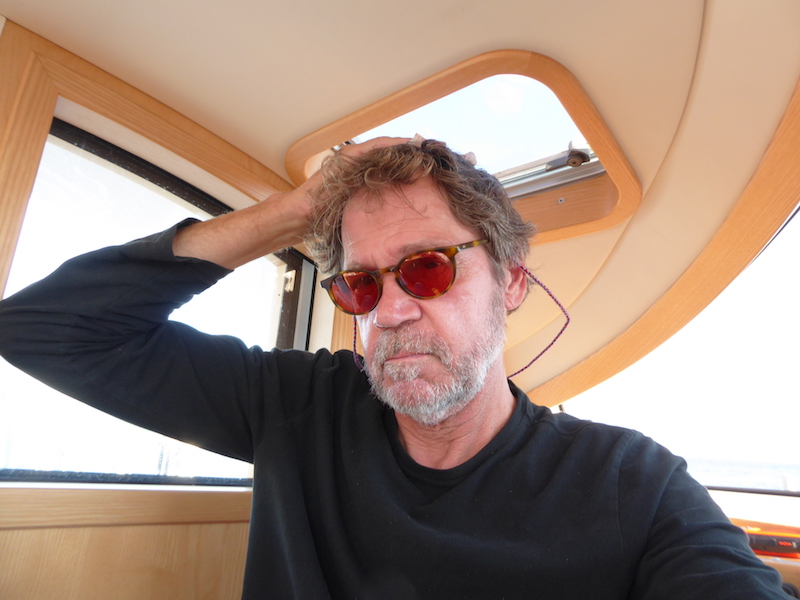 Head wound. To keep from getting bored I ripped my scalp open on the top of the door frame leading into the head. Here I am compressing the wound with a damp paper towel to staunch the bleeding 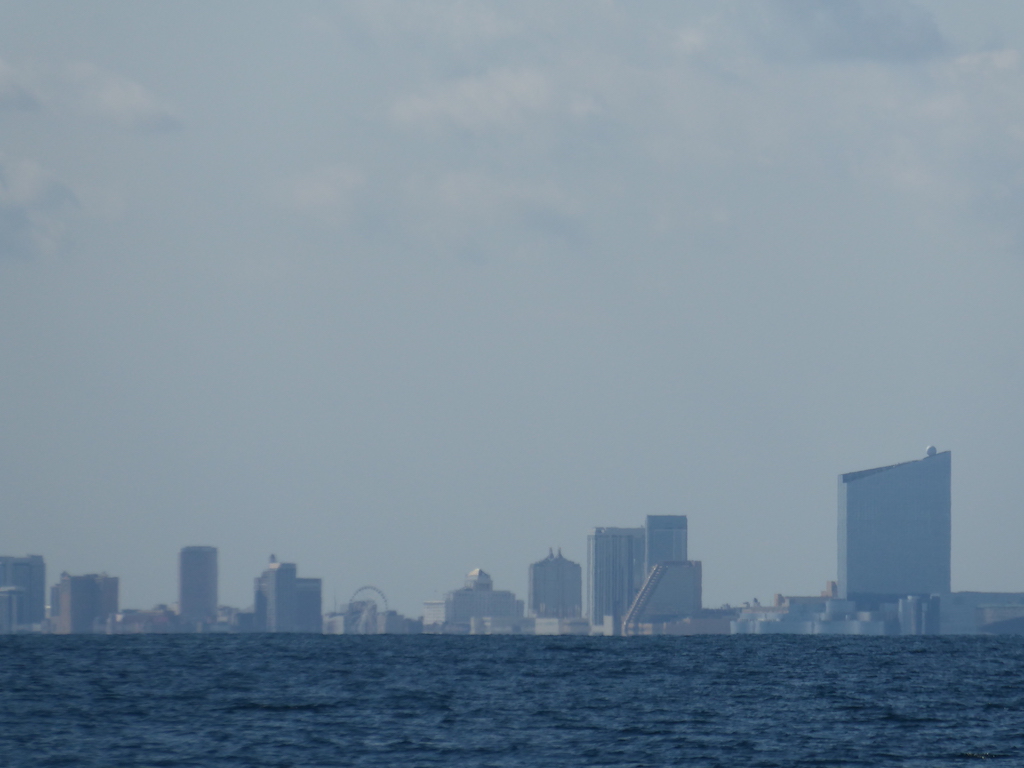 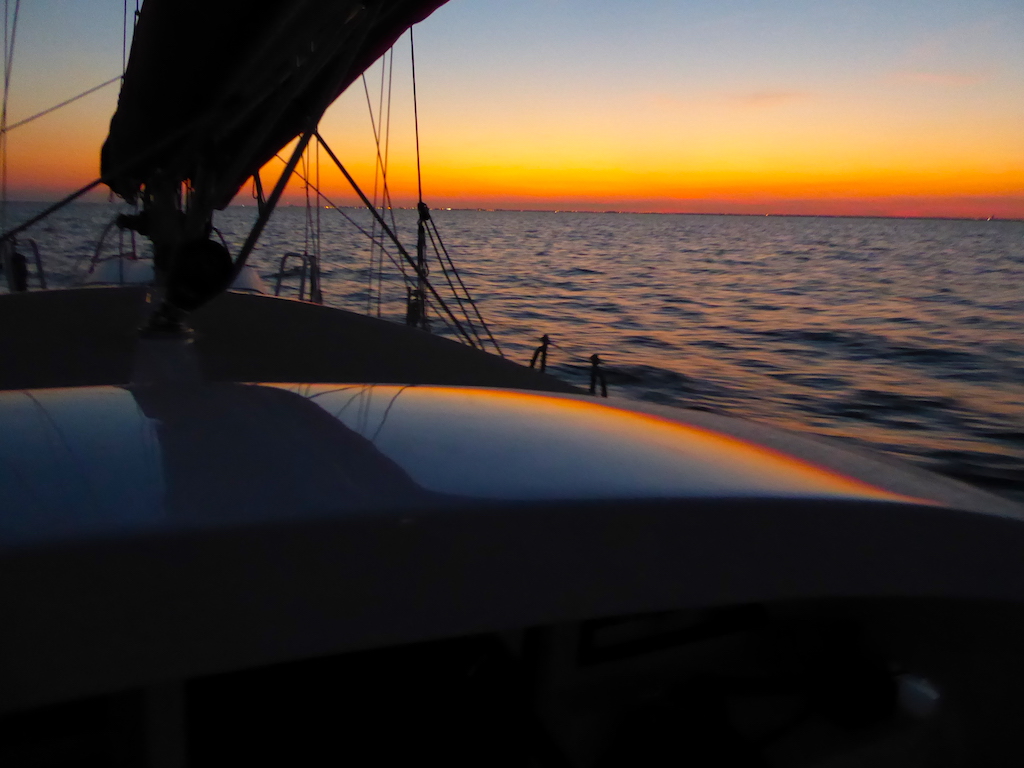 Approaching Cape May as the sun goes down

I spent a night in the very crowded anchorage in Cape May and in the morning woke to a steady breeze, from the southwest, which theoretically might carry me up Delaware Bay on yet another reach. Plus I had six hours of positive current running up the bay to help speed things along. O joy! Sneaking around into the bay through the shoals close to the tip of Cape May I saw the wind speed pop into the 20s, which was very heartening as to the prospect of sailing where I wanted to go, but also a bit alarming as I watched the wind-driven waves breaking on the shoals around me. 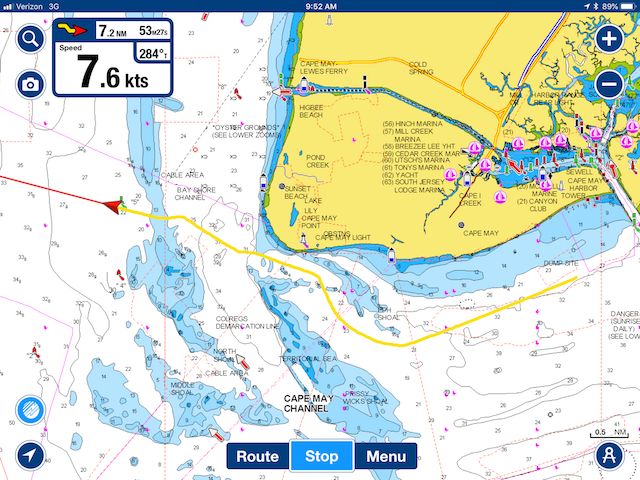 My shortcut into Delaware Bay. We’ve discussed this before. In certain conditions I’m sure this is not a good idea, but it saves six miles over going all the way out to the main entrance of the bay. I might not have done it this time if I wasn’t able to pull up Lunacy’s centerboard and reduce draft to 3 feet 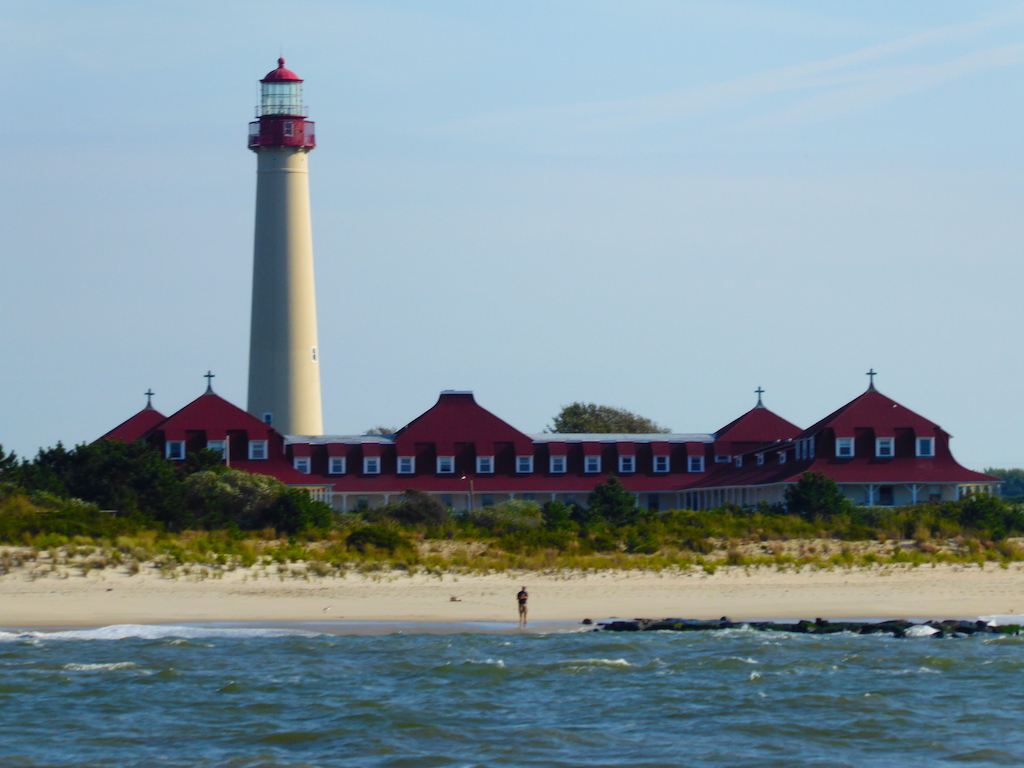 So close to the lighthouse! 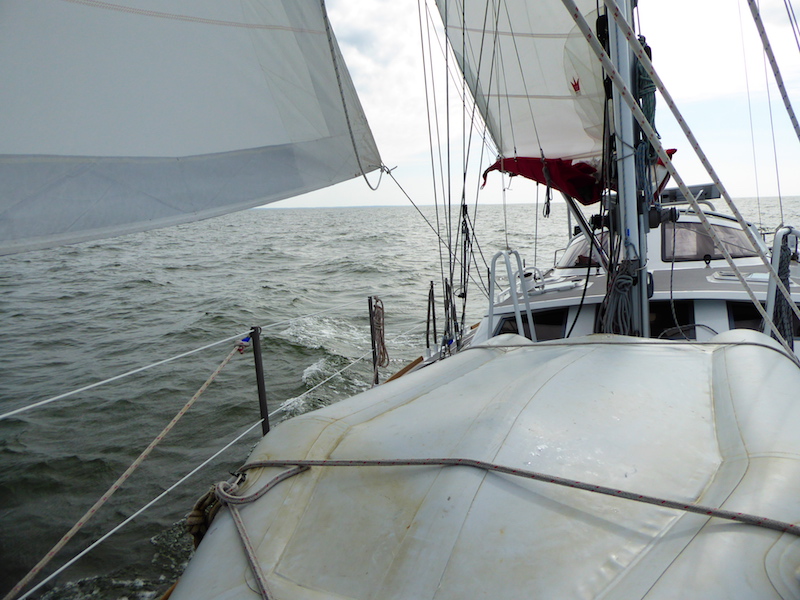 The sailing, unfortunately, didn’t last for long. A bit over an hour, then the wind dawdled off, not so much that sailing was impossible or even aggravating, but enough that it offended my schedule.

It is difficult to construct an interesting description of motoring solo up Delaware Bay and down the Chesapeake. The scenery in the Chesapeake is certainly more pleasant. There are a surprising number of overarching bridges and cables to drive under in the Chesapeake & Delaware Canal. There is a great deal of traffic. A good part of it, this time of year, is made up of sailboats, all them under power, going to Annapolis.

If you’re going to the show, I do hope you’ll visit Lunacy. She’ll be in the same place as last year, and I expect she’ll be proudly wearing a Cruising World banner proclaiming her victory in their last Boat of the Year contest. You can tell the two Belgian guys onboard I sent you.