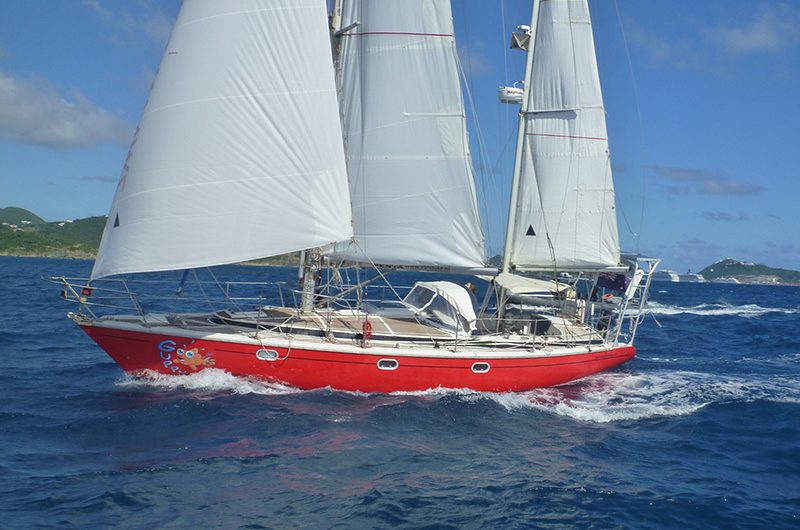 This definitely denotes a trend. A curse even. Call it the Curse of Famous Circumnavigating Sailboats That Have Been Donated to Non-Profit Organizations. The latest victim, you may have noticed, is Laura Dekker’s bright red 40-foot Jeanneau Gin Fizz Guppy, which carried her around the world back in 2010-11 and helped her become the youngest sailor to circumnavigate the world alone. Laura has posted details on both her blog and one of her Facebook pages, so I’ll let her tell the story:

I loaned Guppy long term in full faith to a non-profit organization [Ed: LifeSail, based in southern California] to sail with children after I had been promised to get paid for her by a couple who wished me to donate her to a good cause. The payment never happened – however I still decided that this future for Guppy would be the best and if she could inspire more children to live their dreams it would be all worth it. In April 2018 she left New Zealand with a crew of four, I was meant to be onboard for the first trip to Fiji but got very ill and was unable to take the weather window. The delivery captain who was supposed to sail Guppy to Los Angeles was also onboard. I had gone through the whole boat with him and had full confidence he would get her to LA safely – however during this trip someone else skippered the boat who decided sailing her reefed down with a storm jib in max 18 knots wind was a great idea. Guppy is a racer/cruiser – she likes lots of sail and yes she’s a very wet boat, anything over 10knots of wind means the decks will be wet and water will be in the cockpit. I’m guessing they didn’t want this but of course this caused the boat to sail slow and roll heavily on the ocean swell. Because of this, the delivery captain made a crash through the boat and broke his rib – he had to take a break in Fiji but was also not allowed to come back for reasons still unknown to me.

From there on Guppy continued her journey with a rather incompetent crew which one by one left the boat until one person with very little ocean sailing experience was left singlehanding Guppy. I often attempted to tell them how to sail & maintain Guppy well, getting a big shock every time a picture would come by. They started having trouble with the engines that I have never had trouble with and were perfectly maintained before I gave the boat over, the sun-cover of the Genoa started ripping, meaning the sail has been flapping too much or chafing somewhere. Lots and lots of canisters (and other things) were tied to the railing against my advice of not leaving anything on the deck. Guppy has a low freeboard and therefore very quickly has lots of water on deck. The chance that the jerry-cans will be swept away and tear out the railing is almost inevitable.

On top of that they sailed to many islands which weren’t on the planning, sometimes even in the opposite direction of where they needed to go, causing them to end up way too late in the season and actually unable to safely continue to Hawaii because of Hurricanes.

You can imagine how I anxiously watched the tracker almost everyday – seeing very strange sailing patterns and low speeds for winds in which I know she could perform much better. To my big shock and surprise Guppy was then anchored in front of an Atoll in the open ocean where anchoring is actually impossible and very, very dangerous to say the least. I wrote a message straight away but it was in vain. I watched how the tracker moved onto the reef and stayed there. I’ve been given very little updates or information on what’s really happened or going on now but it’s confirmed that she is indeed on the reef, she has been there for almost one week and I know that no boat, not even a steel one, not even Guppy – could possibly survive this kind of impact.

So far the report of damage I have been given means she’s a total loss. Manihiki is a very remote atoll with very little resources. The sailor who sailed her at the time is luckily okay although needed some medical attention.

Somehow the news that Guppy is gone forever hasn’t quite sunk in yet. It’s unreal, yet real, and I will need to live with this…

The journey of Guppy ends here, but in my memory of course she will always sail on.

This was the middle of last month. As of August 31, Laura had received more info and was able to post the following:

Initial Damage Report of Guppy’s grounding in Manihiki Isl.
Based on information gathered from different sources.

She was first thrown on the reef during a squall in the night which is very common throughout the whole Pacific.
The place of initial stranding was between rocks with big surge.

She was being bounced up and down for a few days before being thrown further onto the reef during another squall.
During rescue attempts the yacht moved resulting in her bow being completely under water.

The following is a list of damage known so far:

– Broken skeg
– Rudder and rudder shaft bend – the shaft is 80mm massive steel – different and much stronger then the original Gin Fizz.
– several holes in the hull resulting in water damage to the following:

>Batteries, Electronics & wiring ( Guppy had very extensive and complex wiring this would need complete replacement due to salt water intrusion)

> Engines (Both engines, their systems, props, shafts would need to be replaced completely )

> Interior (Partly broken out because of rocks sticking through hull, otherwise damaged by salt water which can never be washed out, the interior of this boat is part of the structural integrity and is now broken loose and would need complete replacement)

> The deck is balsa sandwich construction which was in excellent condition however with all this salt water intrusion it will rot away within two years – leading to a highly weakened and useless deck.

Since she’s on the ocean side of the reef there is constant movement and bouncing up and down this leads to a lot of structural damage that can’t be seen at first sight like:

> Besides the holes that are in the hull, big parts of the entire hull are delaminated.

> The entire rigging has suffered extreme forces it’s not made for, leading to delamination of chainplates under deck and metal fatigue of rigging, terminals & masts. – It’s absolutely amazing that the masts are still standing! (all parts would need complete sonar analysing to tell what could possibly be reused)

Then there is also of course a very extensive list of small parts damage.

Here is rough overview of the minimal costs in Euros to repair Guppy:

This is exclusive of salvaging costs, shipping, environmental costs (already going on). It shows clearly that Guppy is a total loss already and not worth fixing – especially considering the fact that she will never be as safe as she once was and LifeSail’s intention is to sail with kids. LifeSail should have Guppy insured according to our agreement, however the insurance probably won’t pay out more then the market value – which is around €70.000. In this particular case I don’t know how the insurance will handle the situation since Guppy was anchored purposely on a very dangerous spot.

LifeSail is still under the impression that they can salvage Guppy, but after making this damage report and the cost involved repairing her it’s clear to me that this is not an option. With a heavy heart and many tears in my eyes I’ve come to the conclusion that the best thing to do is get her off the reef as soon as possible to limit more damage to the coral and environment and then scrap the boat.

Though LifeSail has yet to post anything about the grounding on their Guppy webpage or on their Facebook page, they evidently have provided Laura with photos of the grounded boat: 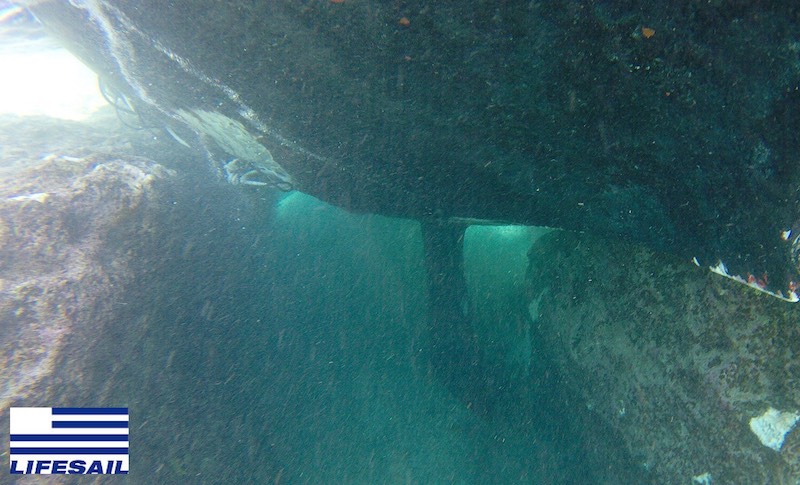 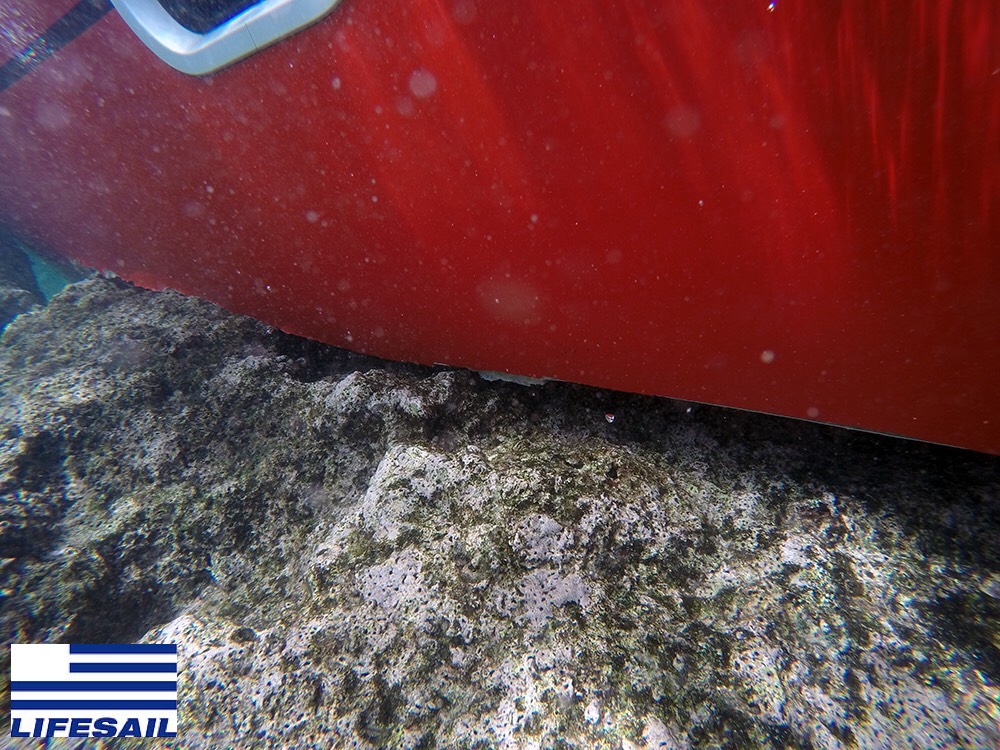 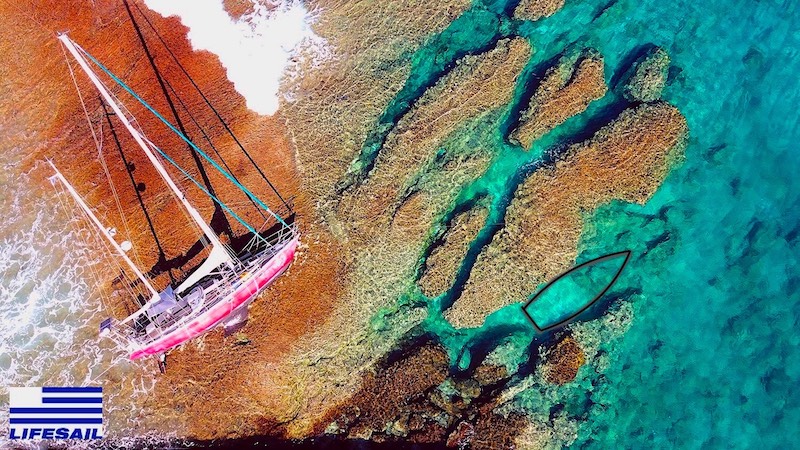 The last shot shows where Guppy initially grounded out (outline in black) and where she is now.

To remind you of the other victims of the Curse: 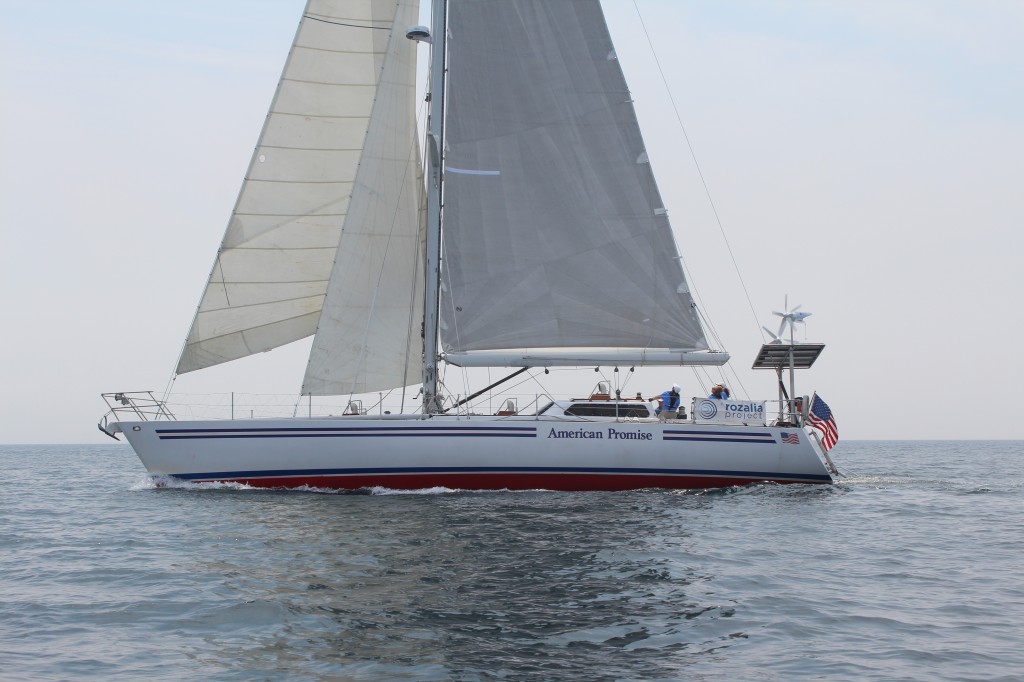 Dodge Morgan’s American Promise, which he gave to the U.S. Naval Academy, which soon sank her in 1991 in a collision with a tugboat. Promise now belongs to another non-profit, the Rozalia Project, which is taking very good care of her 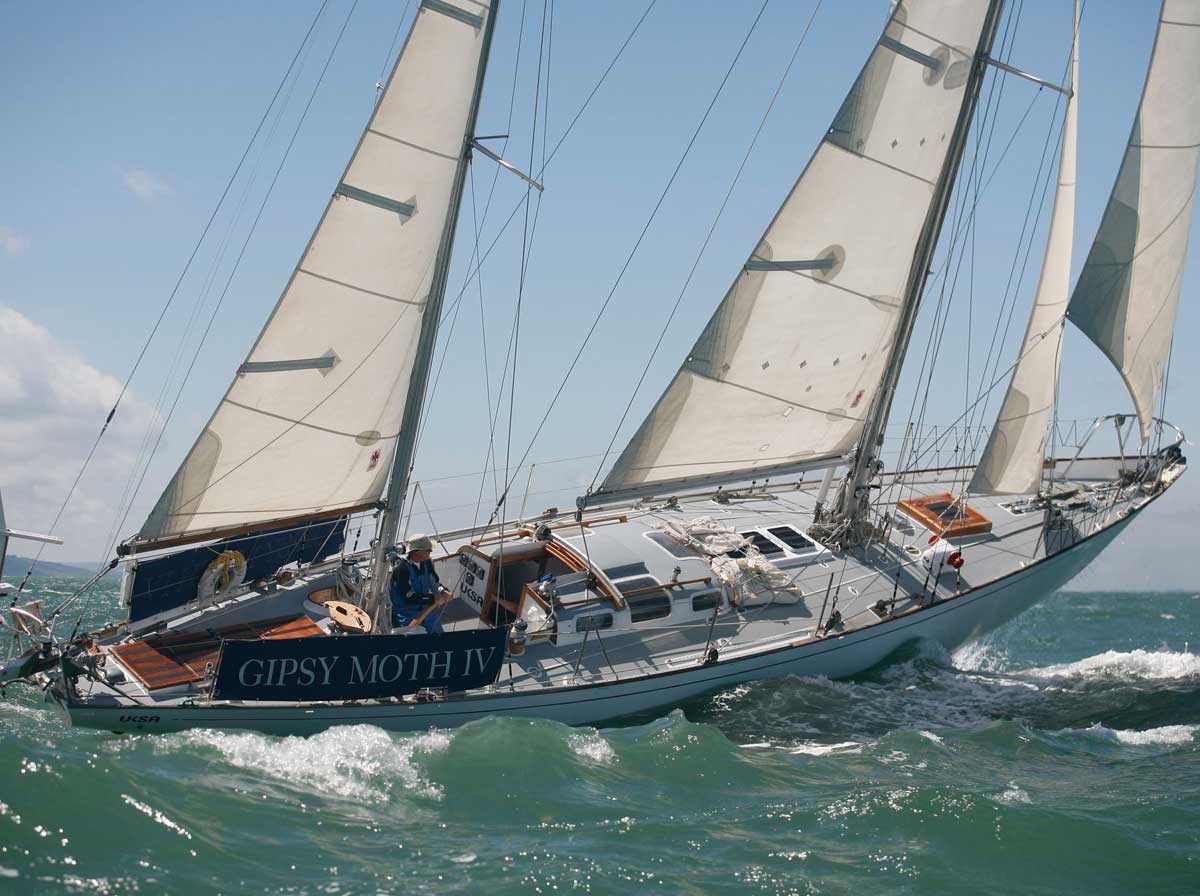 Francis Chichester’s Gipsy Moth IV, which was refurbished at great expense, then was grounded on a reef at Rangiroa in the South Pacific in 2006 while circumnavigating in a program organized by the UK Sailing Academy. Like American Promise she was salvaged and now belongs to the Gipsy Moth Trust. 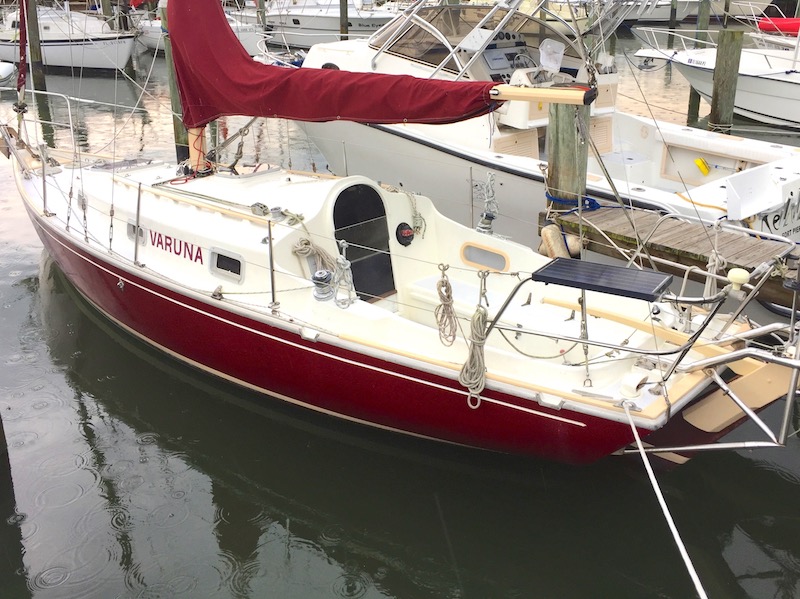 And let’s not forget Tania Aebi’s Contessa 26 Varuna, which was abandoned in the North Atlantic last August, not by a non-profit organization, but by a private owner.

The exception that proves the rule, if you will.