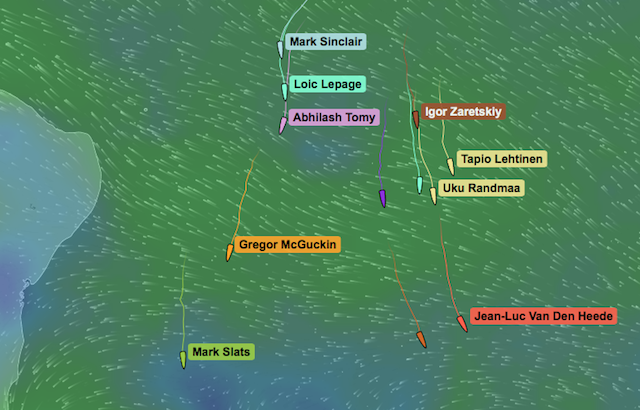 Here we are a shade more than a month into Don McIntyre’s Golden Globe retro tribute race and already the pot is stirring nicely. There are three distinct leaders, Jean-Luc van den Heede (an older but highly experienced solo ocean racer), Philippe Peche, and Mark Slats, all sailing Rustler 36s, with the main peloton not too too far behind. Meanwhile, three sailors have already quit the race altogether, two of them complaining of windvane problems. Another competitor, Antoine Cousot, stopped to regroup in the Canaries, complaining of his windvane and mental stress, then continued sailing in the non-competitive Chichester Class. Another, Istvan Kopar, meanwhile broke communications protocols (i.e., he turned on his sat phone) to also demote himself to Chichester status, complaining (you guessed it) of windvane problems. Istvan intended to stop and swap vanes in the Cape Verdes, but then thought better of it and successfully lobbied to be allowed to continue racing.

None of this is terribly surprising. The first Golden Globe saw several contestants dropping out before they ever reached Cape Town. And yes, there were self-steering problems, most importantly on Robin Knox-Johnston’s Suhaili, the eventual winner of the race. Knox-Johnston, tellingly, never succeeded in properly repairing his windvane system, but simply carried on without it.

The only out-and-out failure involved Amra’s Beaufort vane, which suffered a broken weld, something you could never really hope to repair at sea. The other problems, as I see it, have had as much to do with the users as the equipment. 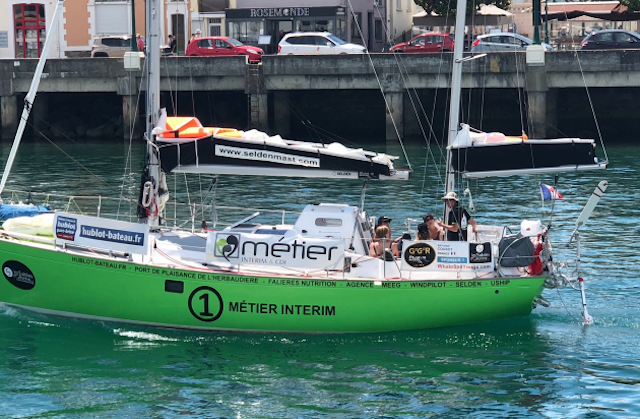 Antoine Cousot aboard his Biscay 36 ketch Métier Intérim prior to the race start. Cousot is a professional luxury yacht and delivery skipper 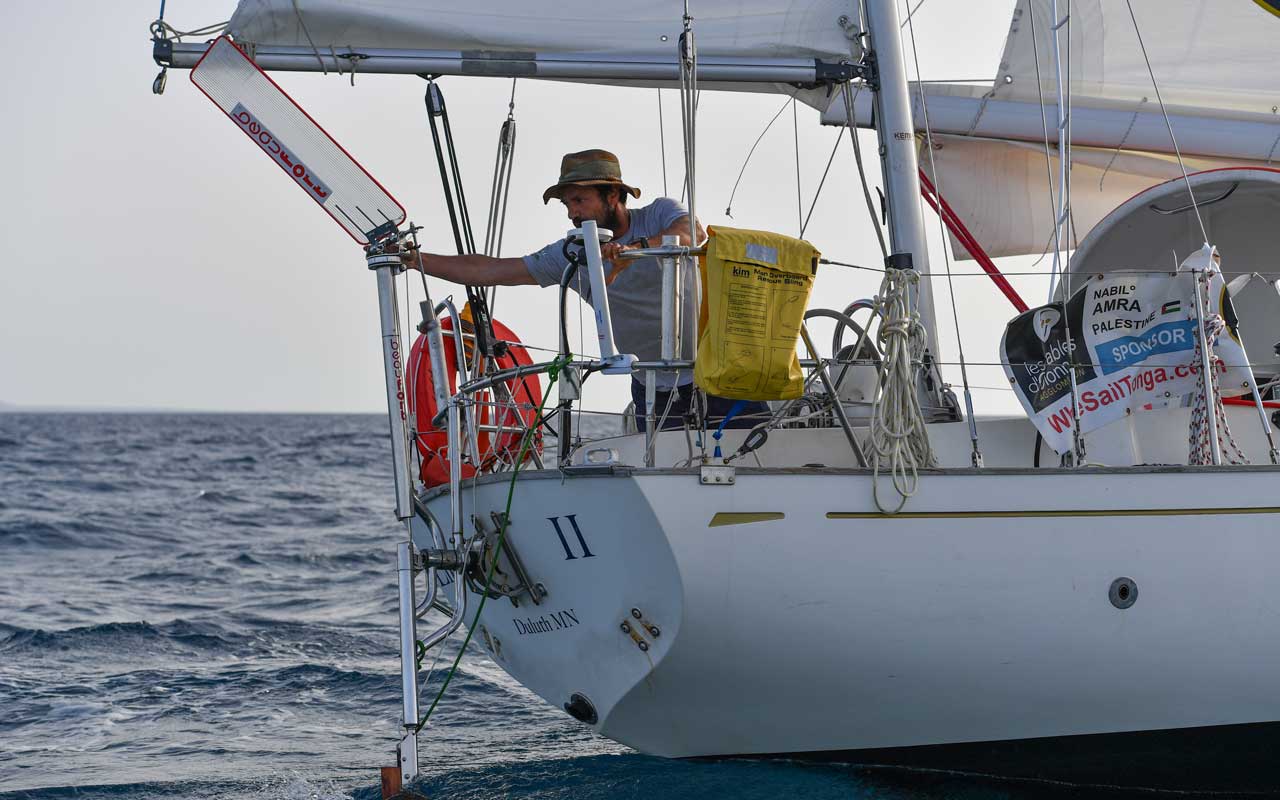 Here we see Nabil Amra fiddling with the Beaufort vane on his Biscay 36 ketch Liberty II. Amra is an American-born Palestinian who works as a foreign-exchange trader in Minnesota 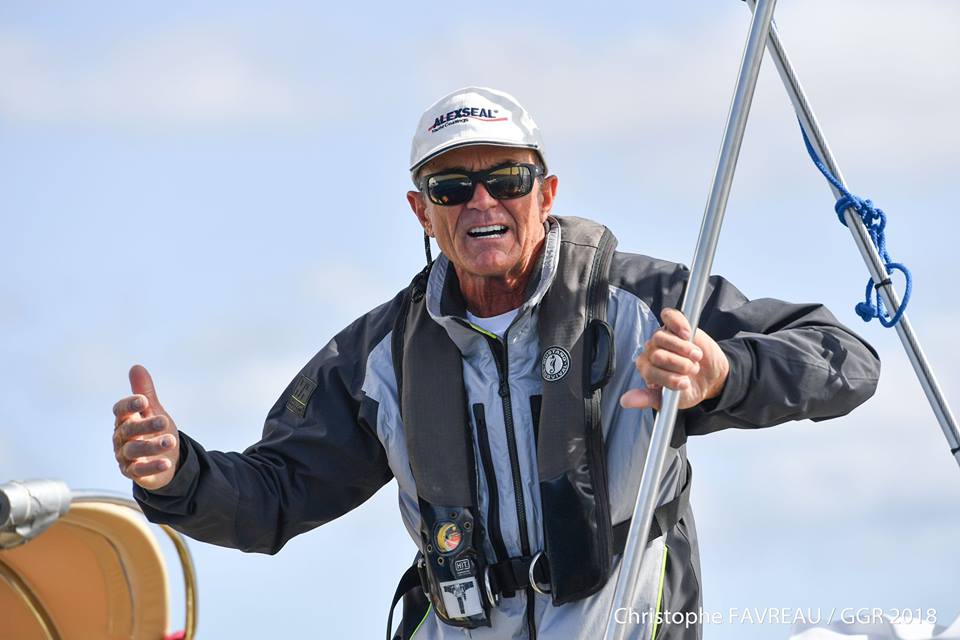 Istvan Kopar aboard his Tradewind 35 cutter Puffin. Kopar is a Hungarian-born American with lots of sailing experience, including a solo one-stop circumnavigation in 1990-91. He has previously sailed with a Monitor windvane, but never with a Windpilot

Peter Foerthmann of Windpilot, a passionate man, provided in-kind sponsorships to four GGR sailors–as in he gave them windvanes for their boats, as well as back-up vanes to carry–and so obviously has some skin in this game. A fifth unsponsored contestant also has a Windpilot vane on his boat. Two of Foerthmann’s sponsored sailors, Cousot and Kopar, had problems with their equipment, and he has described his efforts to support them at great length in his blog. (Check links here, here, and here.) In summary, it seems Cousot spent little time familiarizing himself with his vane and also had some bolts fall out of it, which he replaced from the spares he had onboard. Kopar meanwhile had more time to work with his vane, but ultimately may have been thwarted by major modifications he made to his boat’s main steering system.

Farebrother’s problems with his Hydrovane are harder to suss. As Foerthmann notes in his blog (first link above), a text message referencing Farebrother’s problems with his vane was deleted from the GGR site soon after it was posted. Farebrother bought the boat he was racing, with Hydrovane installed, from GGR organizer Don McIntyre and put the boat up for sale as soon as he reached the Canaries. Hydrovane is also a sponsor of the GGR event, as McIntyre notes in his recent dissection of the windvane saga on the GGR site. His only comment there as to Farebrother’s relationship with his vane is: (Operator issue)?

Personally, I’ve never used a Hydrovane. I have used Monitor and Aries servopendulum units in the past, as well as a quaint trim-tab Ratliffe unit, all on boats I’ve owned, and I have a new Windpilot on my current boat, which steered well most of the way across the Atlantic last spring. Like Cousot, I did have bolts fall out, which I simply replaced during the passage. When it was over Foerthmann sent me a full set of replacement bolts gratis. He attributed the problem to the lanolin he slathers on the stainless steel fasteners to insulate them from the unit’s aluminum frame.

Prior to setting out on my transatlantic I did send Foerthmann a complete set of photos of my Windpilot installation, which allowed him to suggest two important improvements. If you read his blog re these GGR Windpilots, you’ll see Foerthmann is very big on this. He LOVES to receive photos (and videos) of installed units and is always willing to critique installations.

The point of all this (I suppose) is that few of the current GGR competitors have had little if any experience with mechanical windvane steering, due to the great prevalence of modern electronic autopilots. Interestingly, the same was true of most of the original GGR sailors in 1968-69, simply because windvane steering, particularly servopendulum units, hadn’t been around that long. The difference is that in those days (as Knox-Johnston so aptly demonstrated) serious ocean sailors were much more adept at simply getting boats to sail themselves.

Ironically, sailors in this retro event are handicapped both by their inexperience and somewhat by the rules of the event, which tend to favor boats with cutaway full keels and inboard rudders. Many people think any boat with a full keel must have good directional stability, but this really isn’t true. I can tell you from hard-won experience that the classic CCA-style cutaway full keel with long overhangs and an attached rudder far from the transom does not help a boat steer itself easily. It’s OK if the front of the keel is cutaway, but for a boat to steer itself well the rudder needs to be aft. 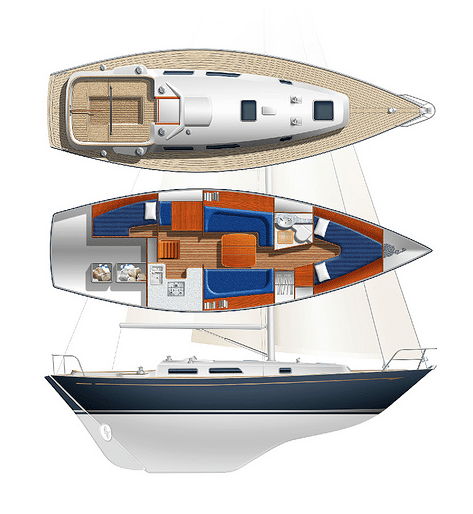 Rustler 36 underbody, showing its long transom-hung rudder. Several are entered in the GGR

Interestingly, this is exactly the configuration you see on the three Rustler 36s that are now leading the fleet. Boats like this are easier to sail with windvanes, precisely because they have greater directional stability. A great part of the art of steering with a vane involves balancing a boat’s rig against its keel and rudder. It is a balancing act that does not always favor boatspeed, which is a contrarian fact that some GGR sailors may now be learning the hard way. 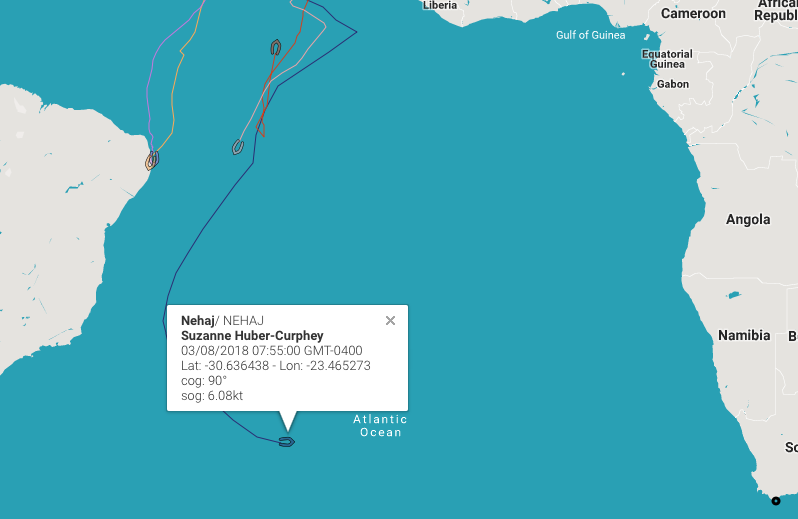 Meanwhile, over in the non-competitive Longue Route world, my favorite sailor from both tribute events, Suzanne Huber-Curphey, is well ahead of everyone and is pointing due east at Cape Town. As you can see from the Longue Route tracker image, three of the other top five boats have put into Brazil or have turned around. The second place boat, fittingly, is skippered by Suzanne’s husband, Tony Curphey, who is running more or less even with the top westernmost GGR boats.