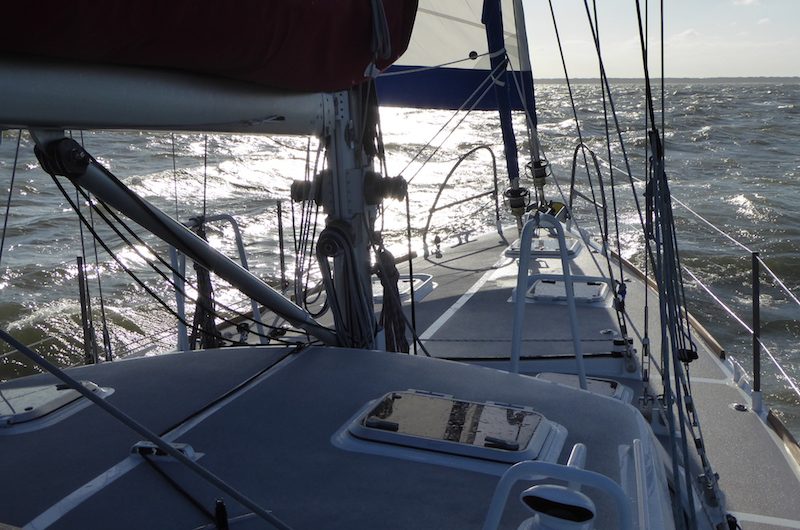 I did take the family down to Hilton Head to visit Lunacy over the Christmas vacation, but we did not take the boat anywhere. It was far too cold for that. Instead we used the boat as a hotel suite (thank God for the Refleks diesel heater!) and toured the surrounding environs. Savannah, Beaufort, Charleston, and of course the island of Hilton Head itself. To get home we had to drive to Jacksonville (the airport at Savannah was closed) through a vicious ice storm, and I swear I saw more car accidents in those few hours than I’ve seen in my entire life. True fact: people in the South cannot drive on slippery roads to save their lives.

We tried again last week, in much nicer weather, but still there were complications. Daughter Lucy, who likes horses much better than boats (go figure), had first to be deposited in the Florida horse/cattle country outside Gainesville, so she could indulge this preference. Which perversely meant getting stuck overnight in Charlotte, North Carolina (where family vacations go to die), due to the ineptitude of American Airlines. Which meant the wife and I, once we finally arrived in Hilton Head, really only had a handful of days to fool around on the boat.

I had imagined a more granular cruise of the Georgia coast, getting lost in the marshes, and all that. But in cruising, as in politics (as Otto von Bismarck once pointed out) the art is in what is possible.

Our departure from Hilton Head found the breeze blowing hard from the northeast, so it seemed prudent to take advantage of that and make miles to the south out in open water while the making was good. Slipping down Calibogue Sound on an outgoing tide was easy enough, as was crossing the shoal between the sound and Tybee Roads. But there was a short stretch in the roads where the outflowing force of the Savannah River cut against the 25-knot breeze at enough of an angle to kick up a proper mean sea. 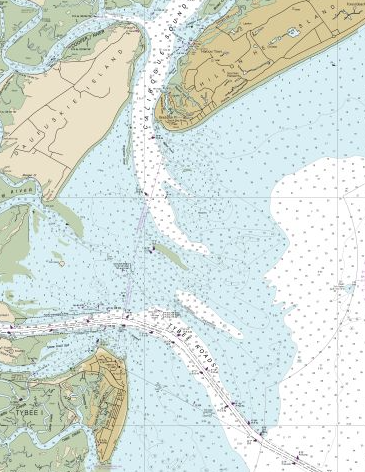 Once clear of those, however, we had a fast downwind ride under headsail alone. The true wind that afternoon got up to 28 knots, yielding speeds over the ground on the order of 7, 8, and sometimes 9 knots. Fantastic! We flashed by first Wassaw Sound, then Ossabaw Sound, then St. Catherines Sound as the day wore on. Fortunately, the wind and seas started fading a bit when it came time at last to close the shore and duck inside at Sapelo Sound. 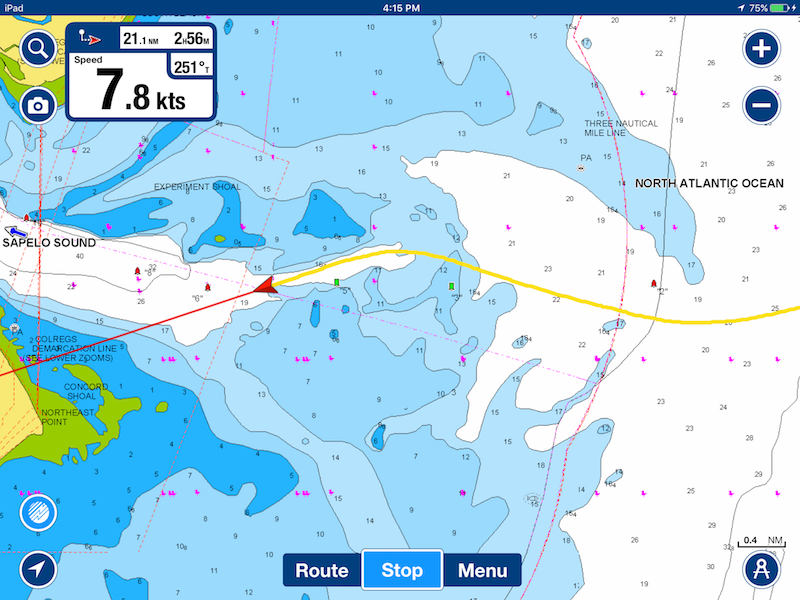 This Navionics screenshot makes entering the sound look easier than it was. There was a bit of chop running, and two of the first three nav buoys were MIA 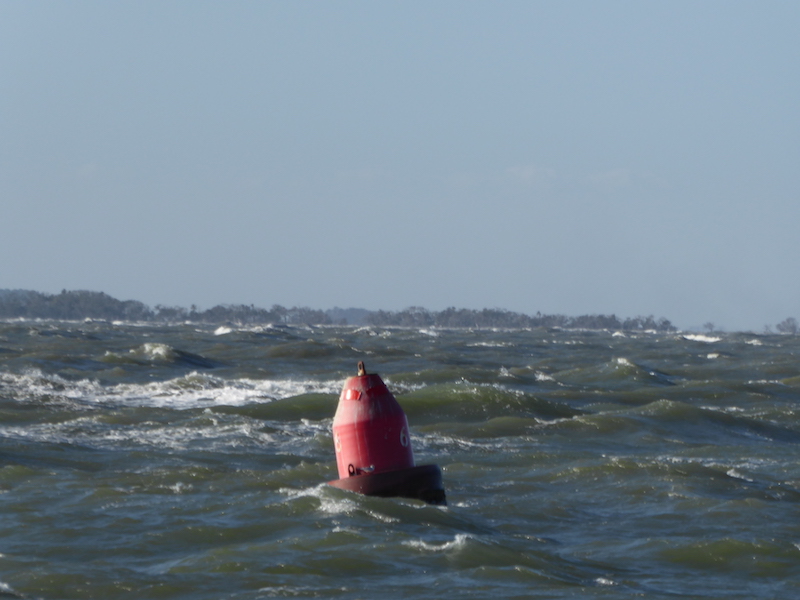 Fortunately, buoy number 6 (the one we were approaching above), which marks Experiment Shoal, was not missing

I had by now already given myself several dope-slaps for forgetting to bring along my copy of Tom and Nancy Zydler’s excellent cruising guide, The Georgia Coast: Waterways and Islands, published by Seaworthy Publications. I had been waiting years to put it to use. Now finally here I was on the Georgia coast, looking for a cozy place to park for the night, and had only my instincts to rely on in finding one. 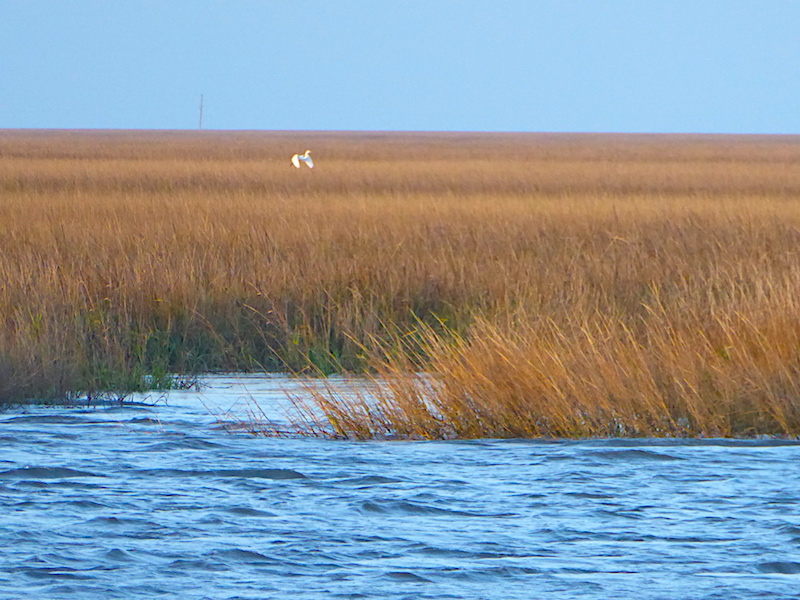 After entering the sound and the mouth of the Sapelo River, while studying charts of its southern verge, I noticed a sail in the distance, emerging from the ICW waterway on the sound’s north side. After some consideration I concluded we had enough time before sunset to meander down the Front River, a short stretch of the ICW off the southern shore of the Sapelo River, then pull off into the Crescent River just south of Creighton Island to anchor for the night. 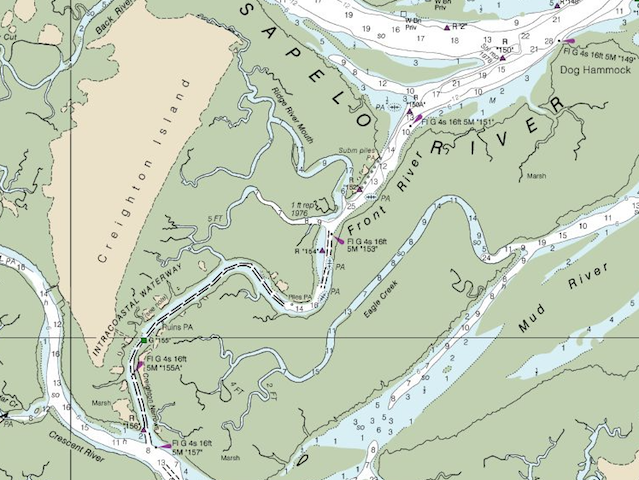 While puttering along I noticed the sail behind us had also turned down the Front River. And soon after we anchored we saw the boat under it, a generic CCA-style design, turn into the Crescent River.

“Oh, no,” complained Clare. “I hope they don’t anchor too close.”

But no, these were thoughtful cruisers, as solicitous of their own privacy as we were of ours. They gave a silent wave as they motored past and continued up the river before anchoring a good half mile away. The name on their transom read Frances B, homeport Savannah, GA.

This seemed vaguely familiar, but it wasn’t until days later that I realized why: it was none other than Tom and Nancy Zydler aboard their current boat, a Mason 44.

The next day, as forecast, the wind was in the south. I saw no point in going outside to beat into it. Far better to stay inside and putter quietly through the marshes. Again, I would have liked to wander far from the beaten path, but we were in a hurry, so stuck to the well-marked trail of the ICW.

A word of advice: though the minimum project depth for the ICW through Georgia is 12 feet, there are many places where it is much less, even when you’re well inside the marked channel. Lunacy draws just 3’3” with her centerboard up, so this wasn’t a problem for us. Still we passed through long patches where there was little more than 4 feet of water and sometimes worried that we might run aground regardless. Later I wondered too about the Zydlers in that Mason 44. Checking some of their published stories online, I see that Frances B draws all of 7 feet, and that the Zydlers therefore have to pick their tides to get through certain spots when cruising this coast.

Also: missing nav buoys, at least at the moment, seem to be very common. 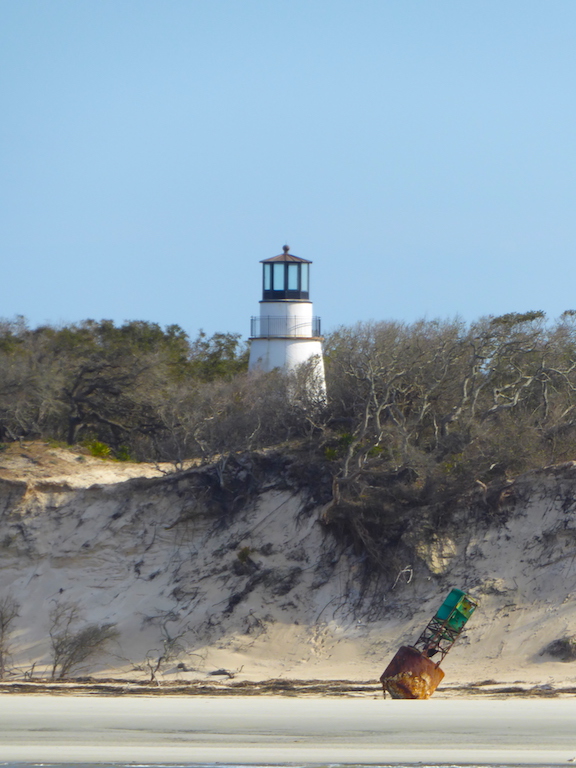 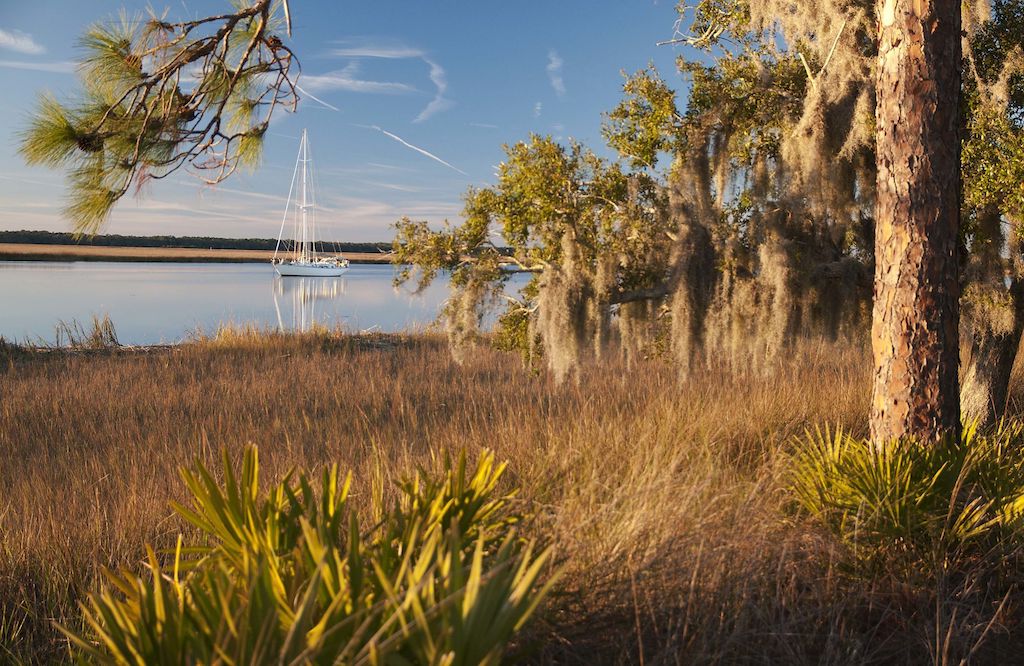 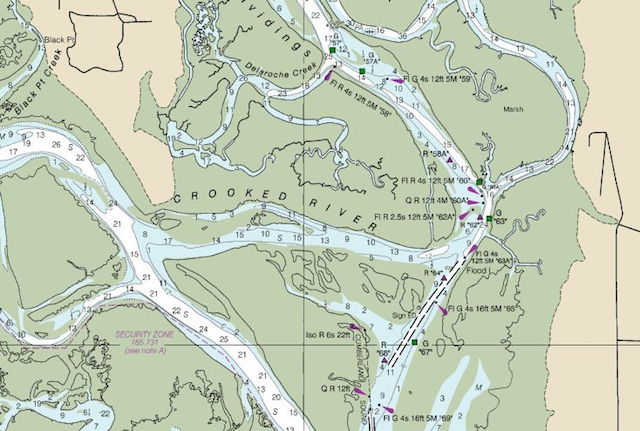 We ended up anchoring for the night between the main body of Cumberland Island and the mainland in an open creek called Crooked River. 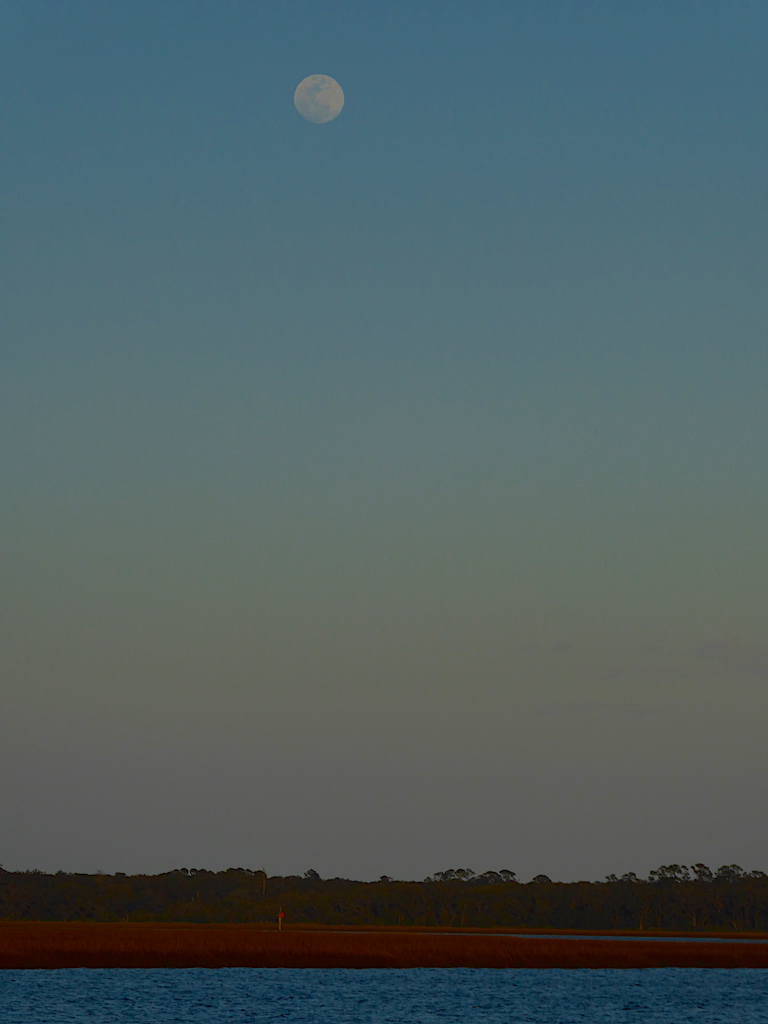 Moonrise over Cumberland Island, as seen from Crooked River 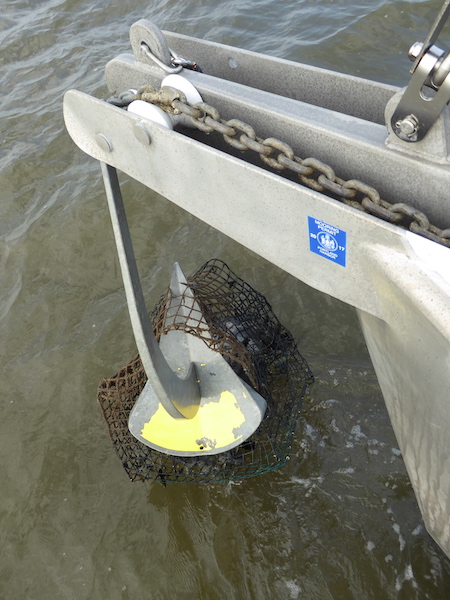 The next morning I had a hell of a time getting the anchor up, and when finally I succeeded I found my hook had impaled a large unmarked crab trap. It took some doing, and a line led to a winch, to get it off, but at last we got free, with only a short distance to go to reach an anchorage from whence we could get ashore to explore Cumberland Island. 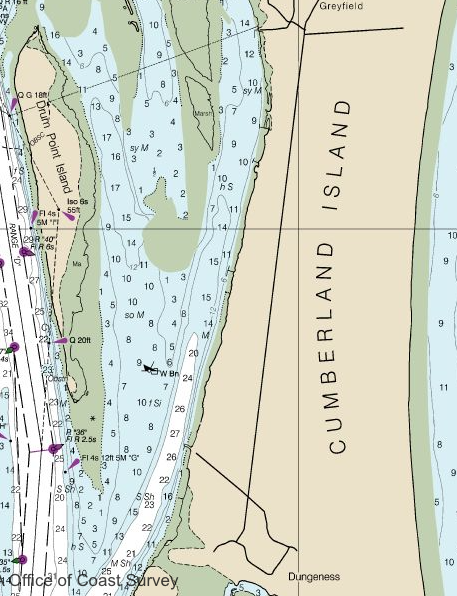 Cumberland Island, in case you have not heard of it, is the largest of the Georgia sea islands and was once largely owned by the Carnegie family, who built a large mansion, Dungeness, at its southern end. A few lesser dwellings, including what is now the Greyfield Inn, were also constructed. The Carnegies in the end sold most of the island to the federal government, which has preserved it as the Cumberland Island National Seashore.

To this day the only commercial establishment on the island is the Greyfield Inn, which, we learned, does not serve lunch to random walk-in visitors from boats.

No worries about that. We were happy enough to just wander around inspecting the island’s flora and fauna. 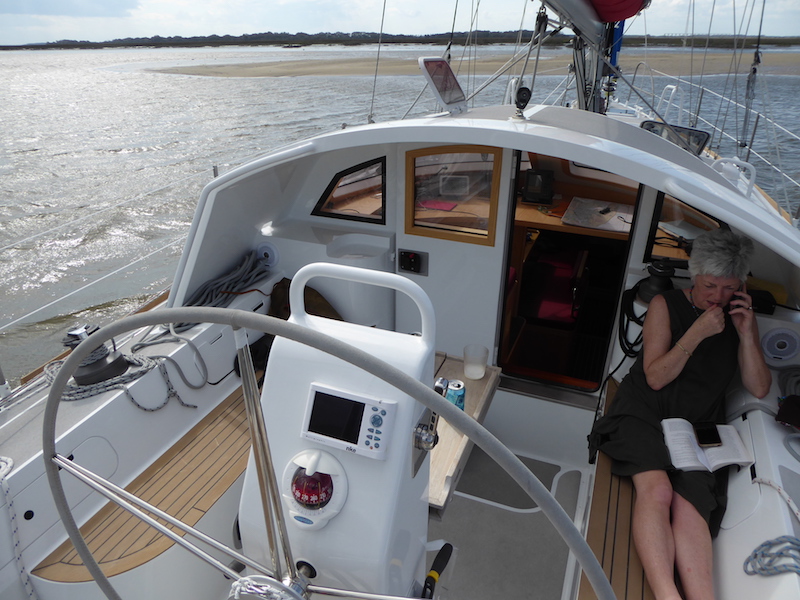 But first Clare had to get involved in one of many conference calls that plagued her holiday. Fortunately for her, to my surprise, we had decent cell coverage for most of our cruise 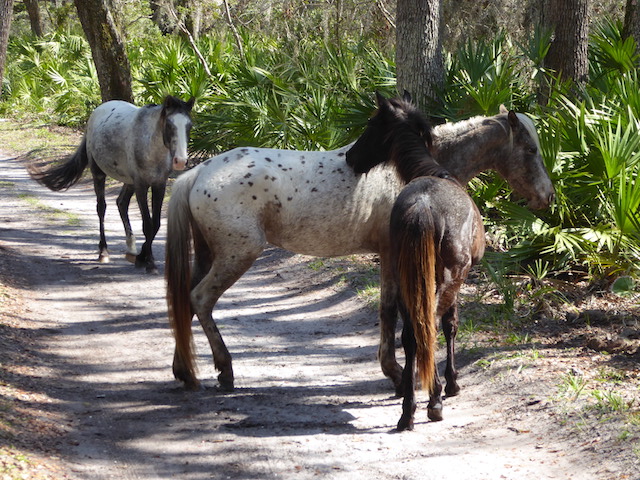 Cumberland is most famous for its many feral horses, or “marsh tackies.” They are fearless, and you can get quite close to them, but you definitely should not mess with them 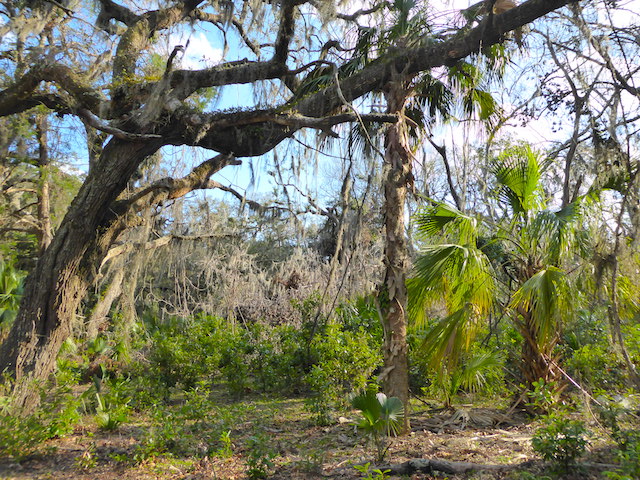 The live oaks and palm trees are also very impressive 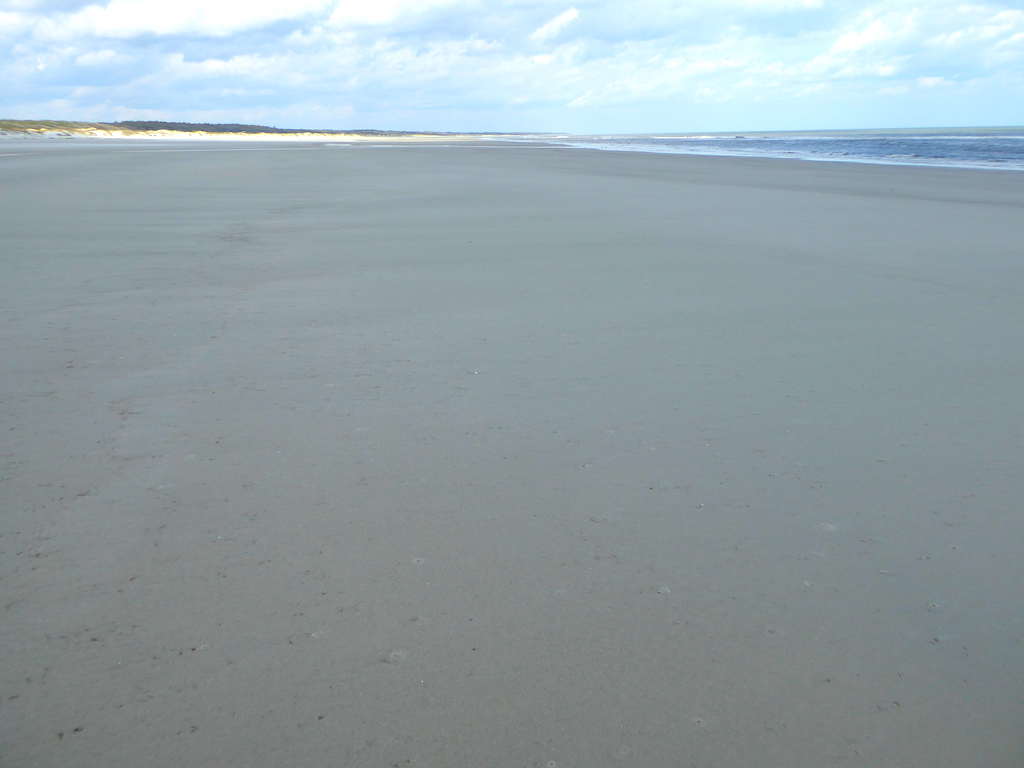 As is the endless hard-packed beach on the ocean side 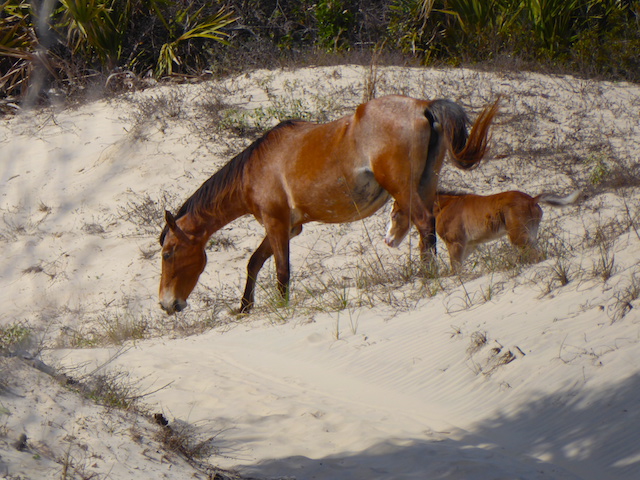 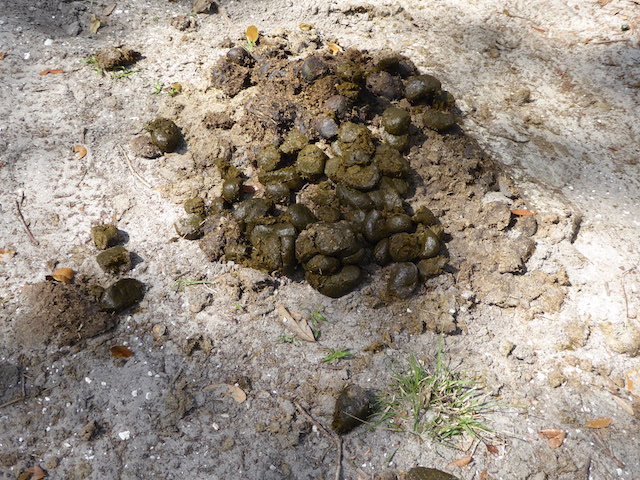 These wild horses, I noticed, seem to have a habit of concentrating all their poop in discrete piles, unlike tame horses, which poop all over the place and leave it to people to clean up after them 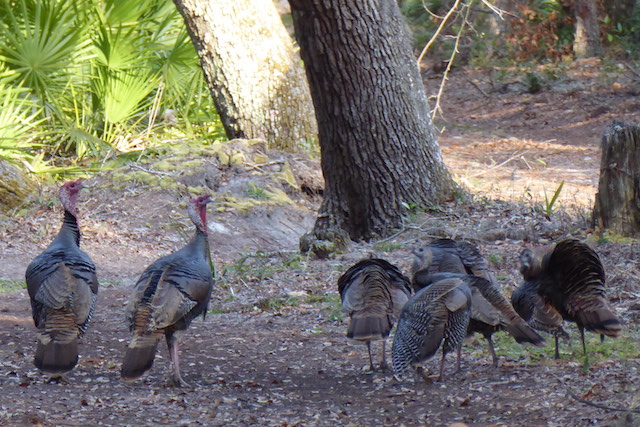 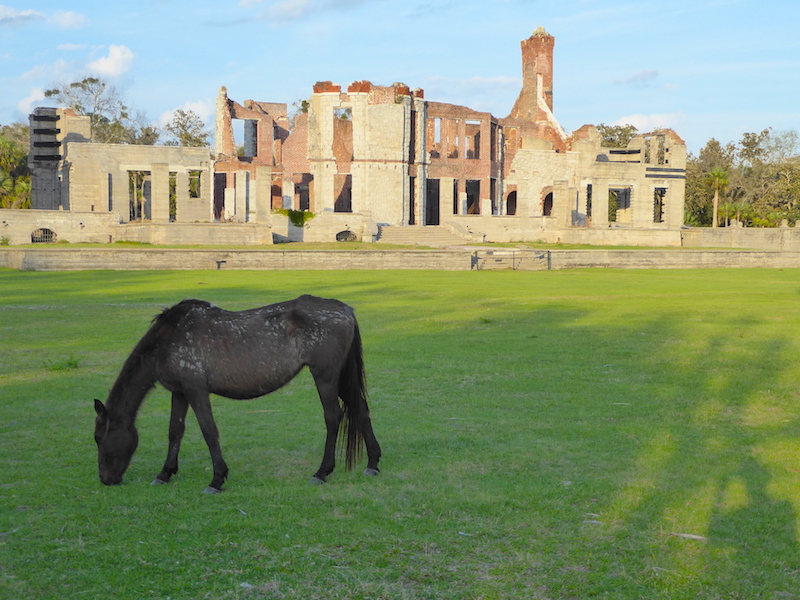 Yet another marsh tacky nibbling the lawn before the ruin of Dungeness. The mansion was built by Thomas Carnegie, brother of Andrew, and his wife Lucy in 1884. It was left vacant after the crash of 1929 and was destroyed in a fire in 1959 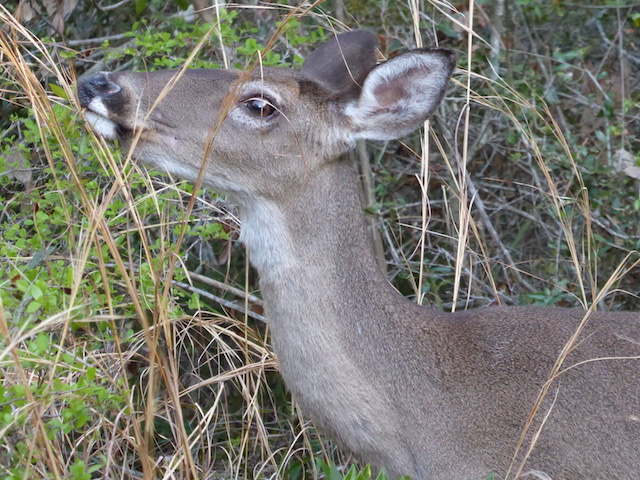 A deer we spotted. It seems close not because I shot this with a long lens, but because we were really this close to it 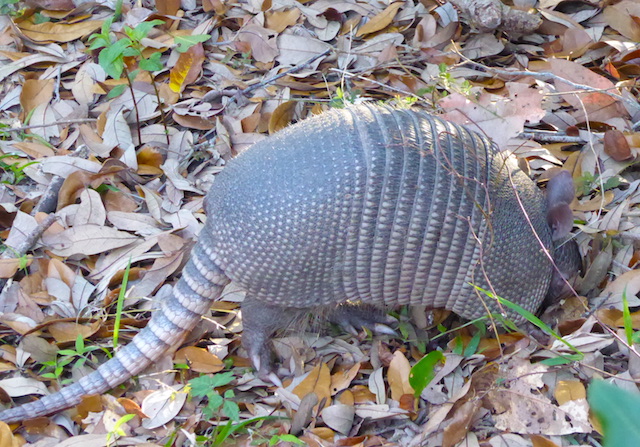 One of several armadillos we encountered. We also met one wild boar, a female, but she declined to pose for a photograph

The distance from St. Marys Inlet just south of Cumberland Island down to the St. John River Inlet leading into Jacksonville is less than 20 miles, so we didn’t need to rush to leave the next morning. Conveniently, too, the wind was in the north again, forecast at 20 knots, though it soon trailed off to near nothing around noon. We had a bit of extra distance, five miles, to run down the ICW to the chosen marina where Lunacy would reluctantly go to sleep again, but once we were out of the river entrance, where the current was running hard against us, it was easy going. 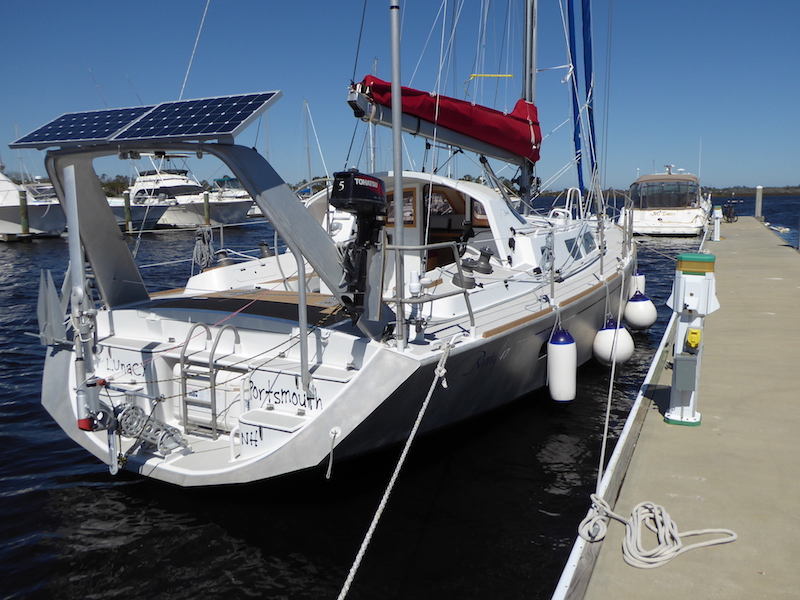 Lunacy tucked away in her berth at the Palm Cove Marina

It is always a sad thing leaving the boat behind somewhere. But there is hope in it too, and the prospect of new adventures to come.