This story has been getting a ton of play in the mainstream media, plus of course the usual sailing-forum trolls who pounce like hyenas on any abandoned-boat mishap have been happily feasting on it. It does involve an unusual set of facts. Starting with the crew: one woman with 10 years of coastal sailing experience, another with exactly zero sailing experience, and two dogs, rather large ones, presumably with limited experience. Then there’s the fairly mild nature of the equipment failures that led to their drifting across the Pacific aboard their boat Sea Nymph for five months: an engine that got wet and wouldn’t start and a bent mounting bolt that compromised one spreader in their rig. Finally there’s the latest development: they claim to have been making radio distress calls throughout their ordeal, but it turns out they also had an EPIRB they never activated.

Honestly I think one big reason the mainstream media likes the story so much is because the putative skipper of the boat, Jennifer Appel, is very outgoing, loves to talk, and has a real talent for hyperbole, as you can see in the immediate post-rescue video interview aboard USS Ashland, the Navy vessel that rescued the castaways after a Taiwanese fishing vessel found them 900 miles southeast of Japan:

Appel is nothing if not effusive, makes for a great extroverted TV spokesperson, and plays perfectly off her more introverted partner, Tasha Fuiava. As for all the hyperbole–the “Force 11 storm” that beset them their first day out of Honolulu in early May (they were bound for Tahiti); the 10-knot counter-currents; the Devil’s Triangle, where “boats go in, but very rarely come out and if they do there are no people on them”; the terrifying shark attacks; etc., etc.–this of course greatly aggravates the sailing-forum trolls, but also plays very well with opportunistic if-it-bleeds-it-leads non-sailing journalists. 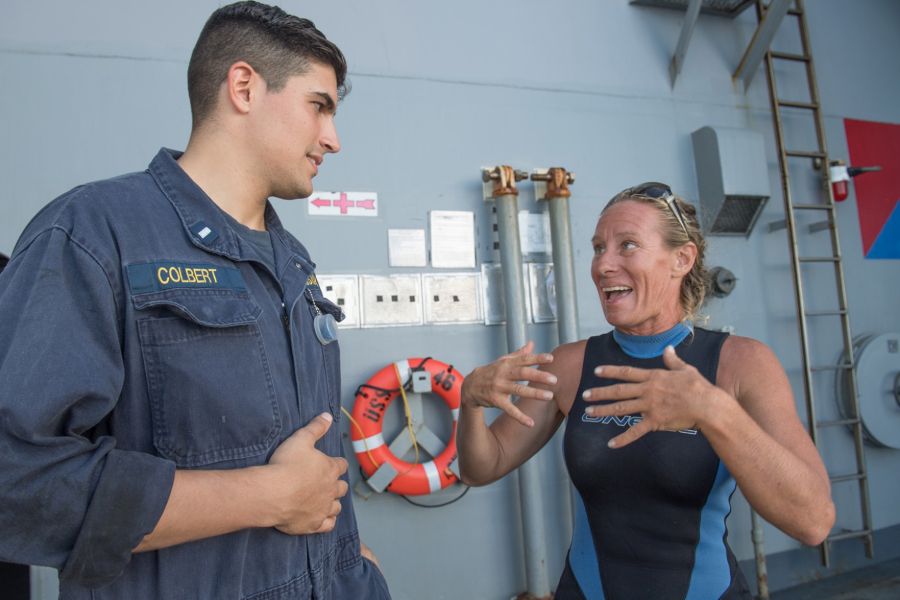 Jennifer Appel talks to a member of Ashland’s crew 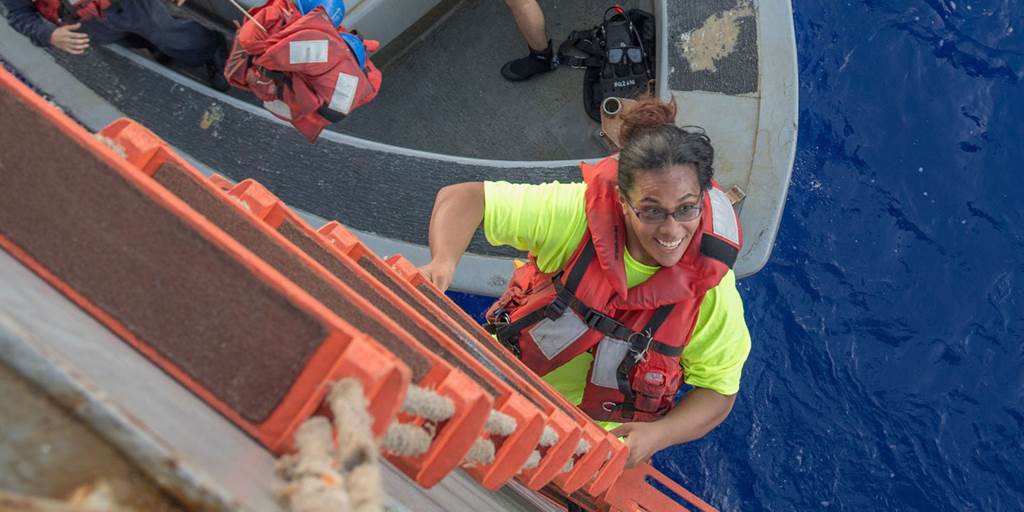 For a good sample of the sailing-forum reaction you can check out Sailing Anarchy and the Cruiser’s Forum. The gross exaggerations and inconsistencies in Jennifer Appel’s tale have provided much fodder for these and other skeptical nay-sayers, who are also incited, I would submit, by the fact that these are women, and–even worse–obviously lesbian women at that.

There are many egregious comments after the many video news clips that have popped up on YouTube. Just one example: “These sicko lesbians were having intercourse with the dogs every night. Wack jobs.” And there are others that are much cruder.

The consensus among many trolls being that this must all be a hoax and these women have hatched a plot to get on TV with Ellen DeGeneres and then get a movie and book deal. 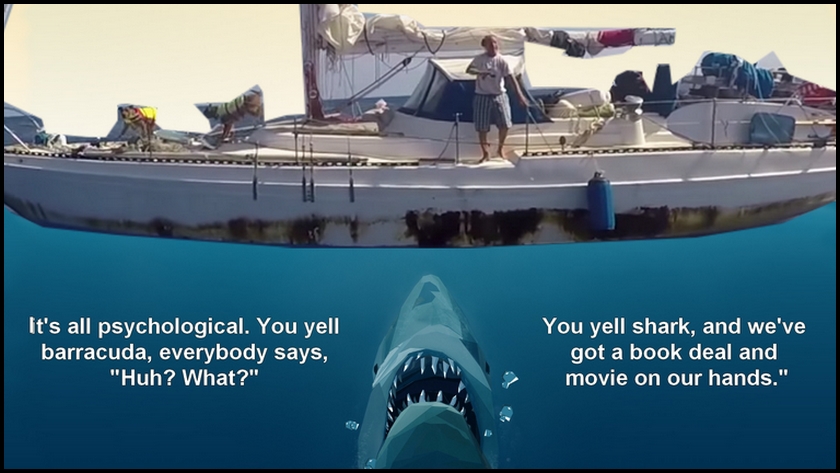 I kid you not. Read through the SA and CF threads and the comments to the news videos and you’ll see that the Ellen comment pops up repeatedly.

The king of the must-be-a-hoax promoters is Dr. Linus Wilson, who seemingly wears his Oxford doctorate and his USCG six-pack license on his sleeve and even went to the trouble to produce a 41-minute video debunking Appel’s story. He’s also done some fact-checking and has established that there was no Force 11 storm in Hawaii in May, Appel’s boat is 37 feet long (not 50 feet, as she claims), there was an EPIRB onboard (this is also being reported in mainstream media today), and tiger sharks cannot be as big as Appel claims.

[Photo removed due to threat of lawsuit.]

Dr. Wilson in his video. We can tell from the way he’s dressed that he must be an expert

Different people have asked me what I make of all this, and I have to say first and foremost: I don’t know what happened. I wasn’t there, and clearly the whole story hasn’t come out yet.

With that proviso, I will share the following opinions:

2) Of course there was no Force 11 storm. But I’m sure it was more wind than Jennifer Appel had seen before, hence her exaggerated view of it. I’m guessing they got caught in a wind-acceleration zone between the Hawaiian islands, where they might easily have seen sustained gusts to 50 knots or so, and weren’t experienced enough to sail out of it promptly.

3) The boat is almost certainly the center-cockpit version of the Starratt & Jenks 45. It is true that the CG registration states it is a Starratt & Jenks-built 37-footer, but no such boat ever existed.

Sea Nymph’s CG data. The size data is simply wrong, which means the first owner to document the boat probably misreported it to the Coast Guard, perhaps to save money on slip fees 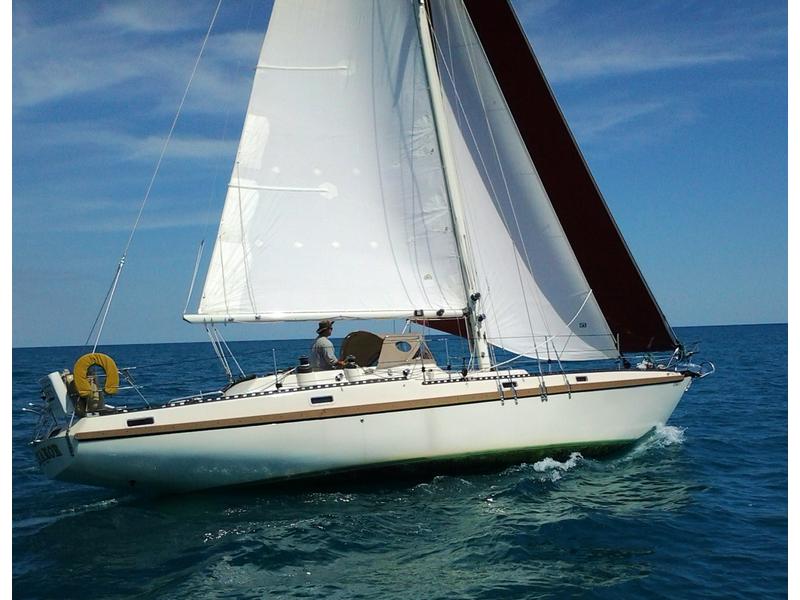 A center-cockpit Starratt & Jenks 45 that is currently listed for sale. (There was also an aft-cockpit version.) All details match the photos of Sea Nymph, except the wooden rubstrake, which might easily be removed, and the portlights along the topsides. If you check other photos of S&J 45s you’ll see the portlight configurations are variable. The boat has a cutaway full keel and is reportedly an able bluewater cruiser. The same molds that produced this boat also produced the Morgan 45 and the Explorer 46

4) The growth pattern on the hull above the waterline, despite what many are saying, is perfectly consistent with a boat having been at sea for a long period of time.

5) Appel’s stories about shark attacks seem to be among her greatest, and most heart-felt, exaggerations. She and Fuiava were obviously frightened by the sharks they saw and both over-estimated their size and anthropomorphized them. Appel in one interview, for example, claims that “the sharks decided to use our vessel to teach their children how to hunt.” That said, it is perfectly creditable that there were sharks whumping against the boat. Drifting objects, particularly those with growth underneath them, are very attractive to fish in the open ocean. The fish, in turn, are attractive to sharks.

5) There may have been a sat phone onboard that was accidentally lost. In one interview there is a reference to a phone, type unspecified, being dropped overboard.

6) The fact that Appel and Fuiava never set off their EPIRB is to their credit. Though they did spend 5 months adrift, their lives were never immediately in danger. They had plenty of healthy food to eat (though they were running low when rescued) and they had water, as they were able to keep one of their two watermakers operational and evidently got enough power from their solar panels and wind generator to run it a bit. They obviously did not want to abandon Sea Nymph. As you can see in their first long interview aboard Ashland, at 10:57 minutes, they tear up and almost break down when describing their sorrow at leaving the boat. 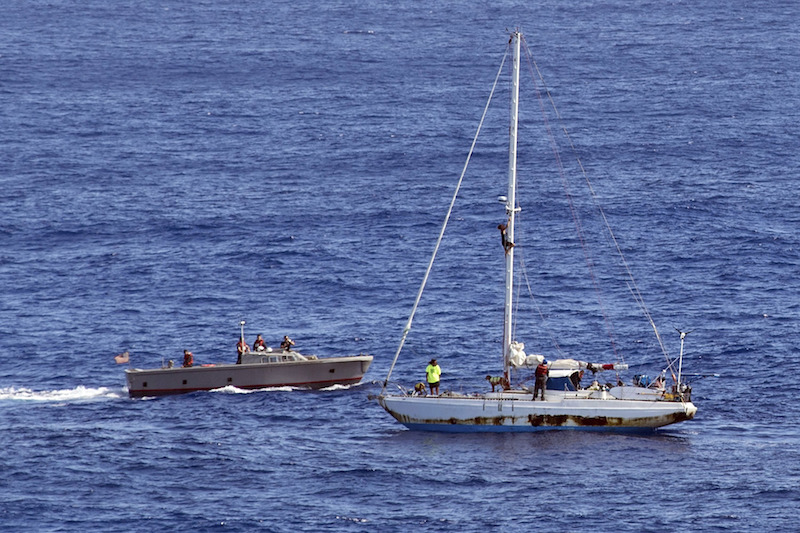 Sea Nymph with a Navy launch from Ashland standing by. Note the figure climbing the mast

My guess is they always hoped they would somehow be able to repair their compromised spreader and continue their voyage. They did try at least once to make landfall to effect repairs, somewhere in Kiribati, but failed. They also hoped to land somewhere in the Cook Islands, but had trouble with counter-currents. Evidently they did not feel capable of sailing the boat with the compromised spreader, or, more importantly, of climbing the rig at sea to fix it (in spite of the steps on their mast). But it may be that in trying to raise other vessels on the radio (they claim they saw several vessels that did not answer hails) they hoped to get someone to help with this. Per the photo above, it seems a member of Ashland’s crew did in fact climb Sea Nymph’s rig before the boat was abandoned. And it has been reported that Ashland’s crew explicitly determined that “the boat was no longer seaworthy.”

Given the great interest in this story, it does seem likely more hard information will emerge. Indeed, the fact that the mainstream media is biting hard on the EPIRB angle and is now turning this into a “gotcha” story almost guarantees it. So maybe we will eventually, for a change, find out what really happened here.