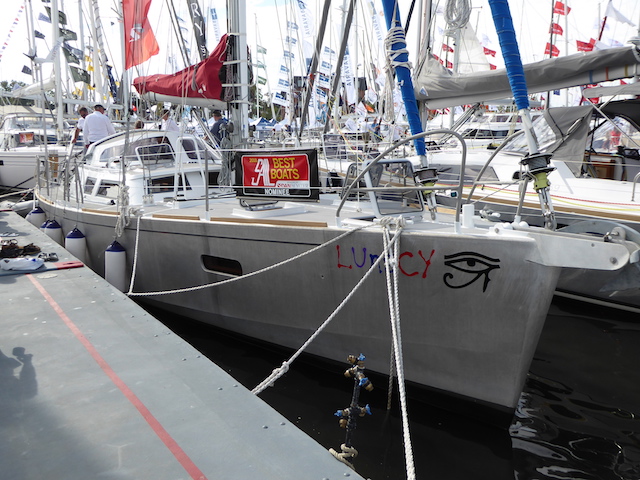 Here’s an interesting journalistic conundrum. I cover the Annapolis show for SAIL every year and judge boats for the magazine’s Best Boats competition. BUT I also have (or had, as the show just closed) a boat in this year’s show (as you can see in that photo up top) that is being considered in both our Best Boats program and in Cruising World’s Boat of the Year program (latter banner not yet installed as of time of photo). In the trade this is called a Conflict of Interest. I actually hoped to capitalize on this and argued to the Powers That Be that I should not play the Best Boats game this year, but no… evidently my opinion is valued (though you wouldn’t guess that from what I’m paid to do this), and I was told I would only be excused from judging the category (Monohulls 40-50 feet) in which my boat appeared. Fortunately, this is a large category this year and my COI did save me a fair bit of work.

In fact it is the builder, Boréal, that is showing the boat, per an agreement I made with them when buying it. My job was simply to get the boat to Annapolis so they could do that. Thus I spent a week sailing from Portsmouth (NH) to Annapolis just before the show, ably assisted by SAIL’s Adam Cort, who ultimately will be the one to write a review of the boat (yet another job I get to dodge, thanks to my lucky COI). 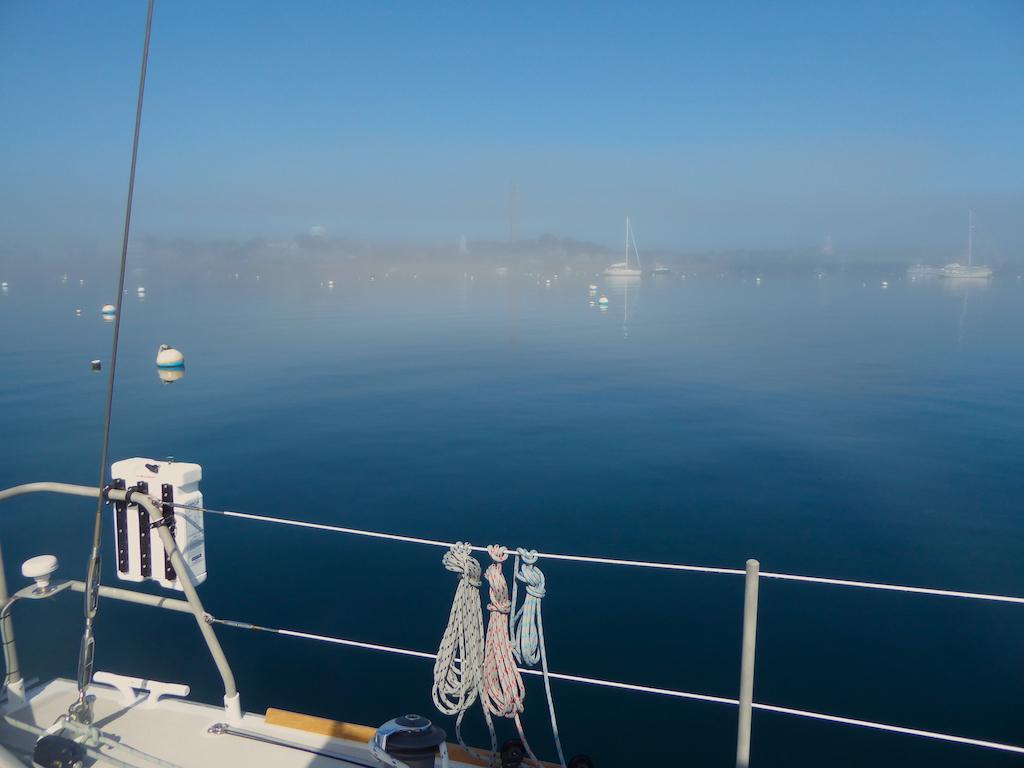 Actually, the delivery involved very little sailing. Mostly it was motoring. Phase 1 was a jump to Provincetown, where we crashed for the night and awoke in the morning to fog. It got thicker and thinner, briefly yielding this fog-bow you see here (note the Pilgrim’s Monument, barely visible in the background), but mostly thicker. Our next jump, involving transits of Cape Cod Bay, the Cape Cod Canal, and Buzzard’s Bay was intermittently fogbound, then totally so when we parked for the night at Cuttyhunk, where I took no photos, because I couldn’t see anything 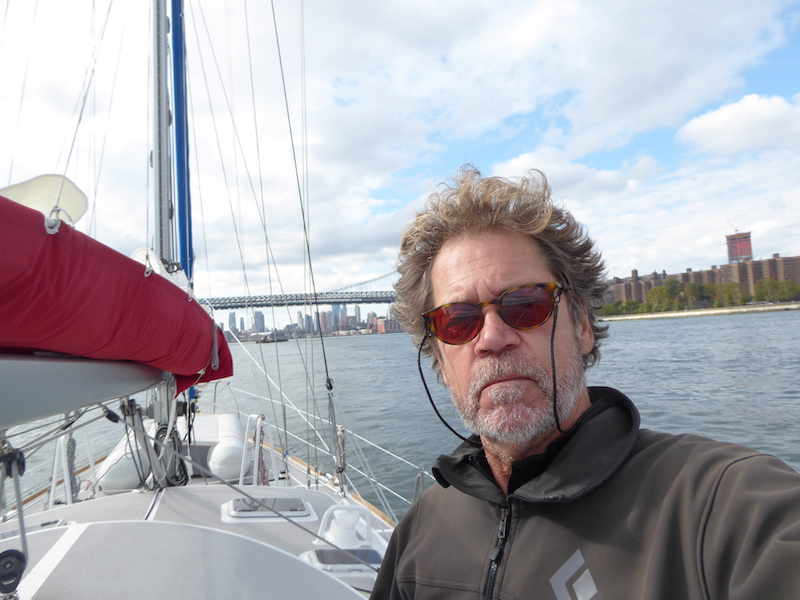 Because of the lumpy leftover hurricane waters offshore I elected to play coward and plotted a course down Long Island Sound. Because we had time in hand, we also played lazy and stopped twice to sleep before transiting Hell Gate and the East River (seen here) with a fair tide beneath us 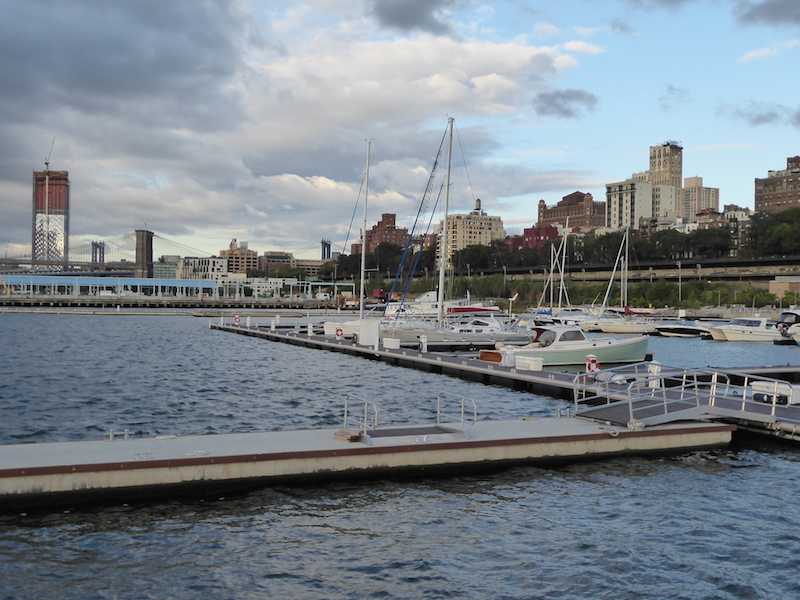 Once through, after topping up on fuel at Liberty Landing over in Jersey City, we pulled into the new One 15 Brooklyn Marina at the foot of Joralemon Street in Brooklyn Heights. Downsides here are: expensive, no services (no showers or bathrooms, no WiFi, but there is water and electricity on the dock), and bad motion from all the harbor wakes outside. Upsides are: at night the wakes go away and it is actually quite comfortable, and you have immediate access to Brooklyn Heights, with its famous Promenade and tree-lined streets of worthy brownstones, trendy markets and stores, fabulous restaurants, and a fantastic new waterside park 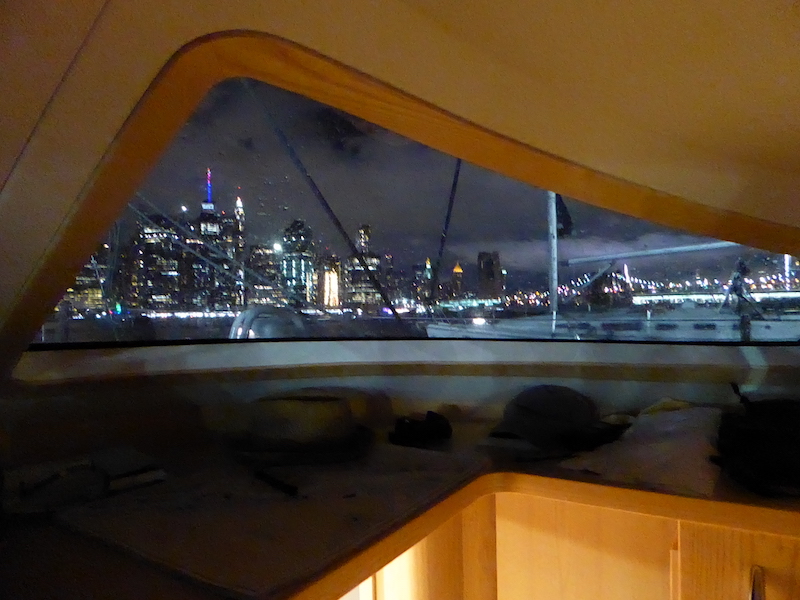 Extra bonus: at night you also have a super-grand view of the Brooklyn Bridge and lower Manhattan 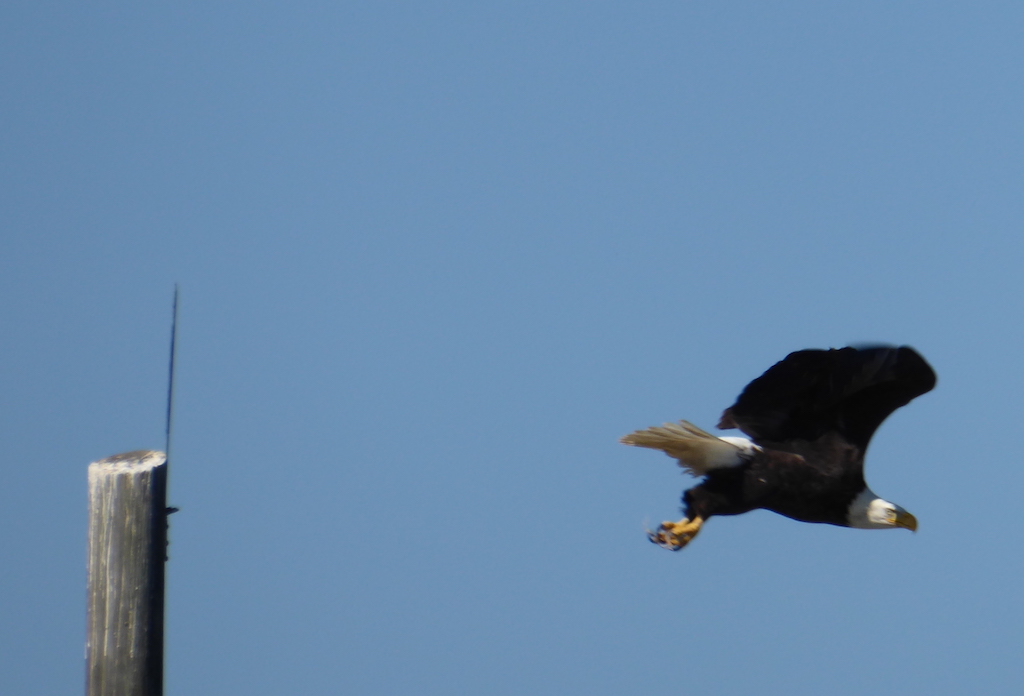 After an uneventful overnight transit of the Jersey coast we headed up Delaware Bay and through the Chesapeake & Delaware Canal, where we spotted this fine bald eagle taking flight. From this point forward Adam, who is by nature an unbridled optimist, proclaimed that every bird he sighted from a distance must also be an eagle 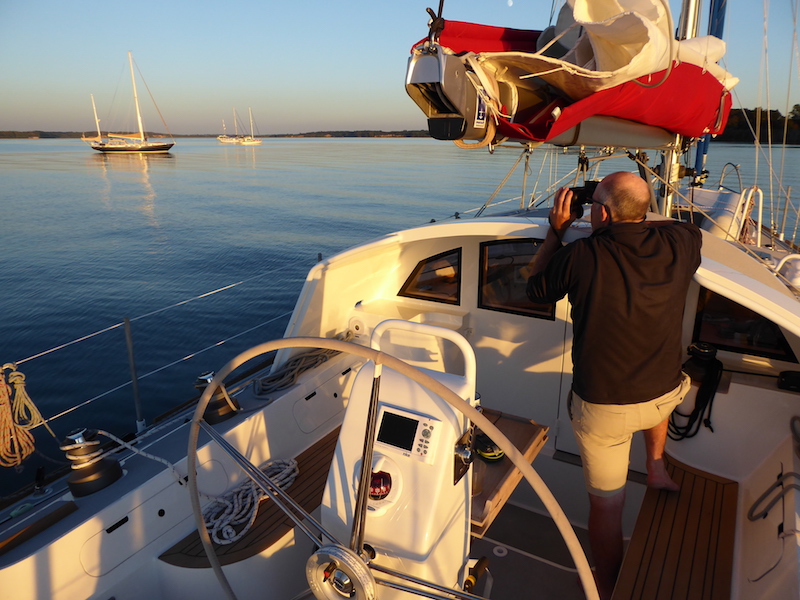 In the Chesapeake at last! Adam spies on other transients after we drop anchor for the night in the mouth of the Sassafras River 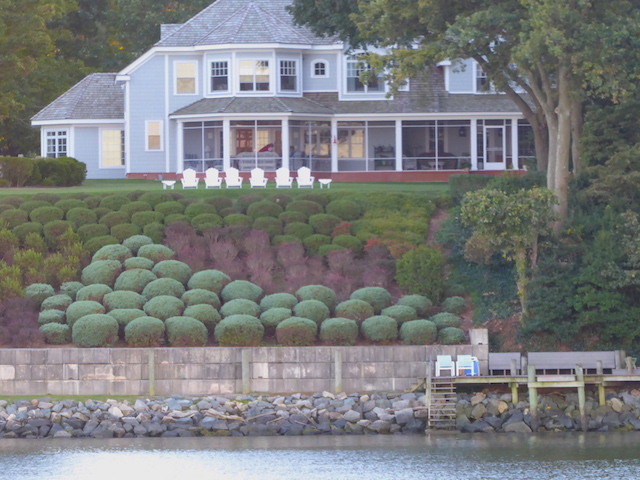 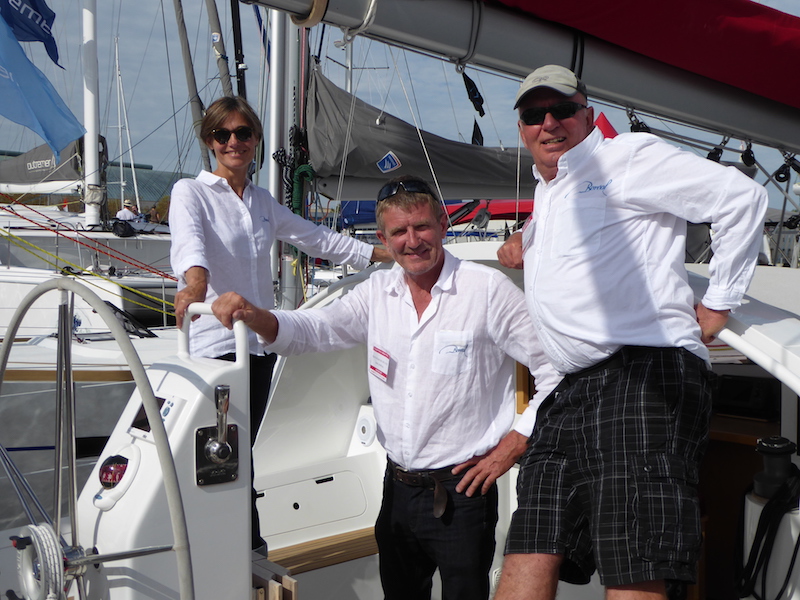 Having fulfilled my obligation, with Lunacy lashed firmly to a dock in between an Allures and a fancy Oyster, I then went about my usual boat-show business and in general tried to stay away from my boat. What you don’t know won’t aggravate you, and, as usual, there were plenty of other interesting things to see. 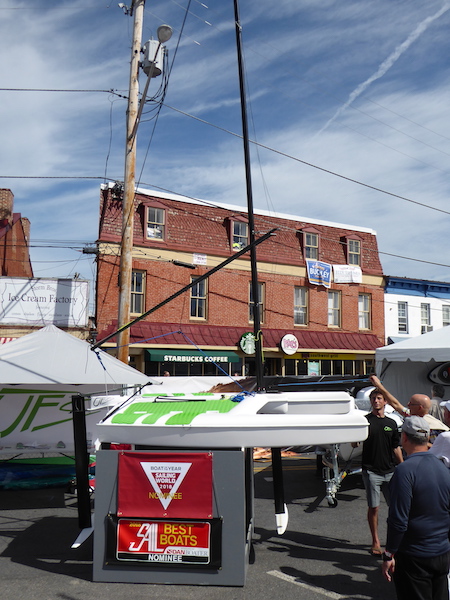 Brand new this year: a tiny UFO foiling catamaran. This is billed as the multihull equivalent of the Moth, but easier to handle 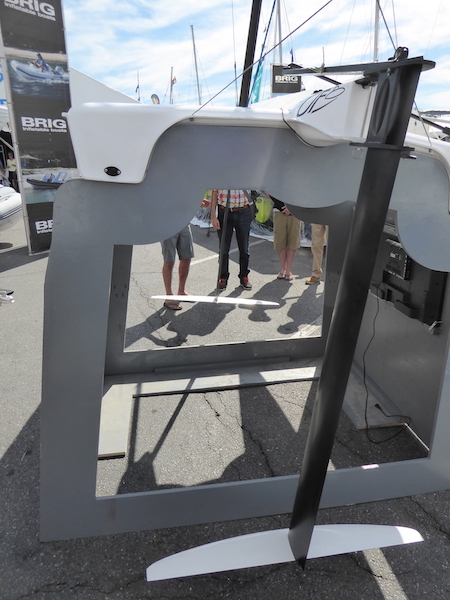 A better view of the foils, with the rudder closest to the camera. As on the Moth there is a wand up forward that automatically adjusts the pitch of the daggerboard foil 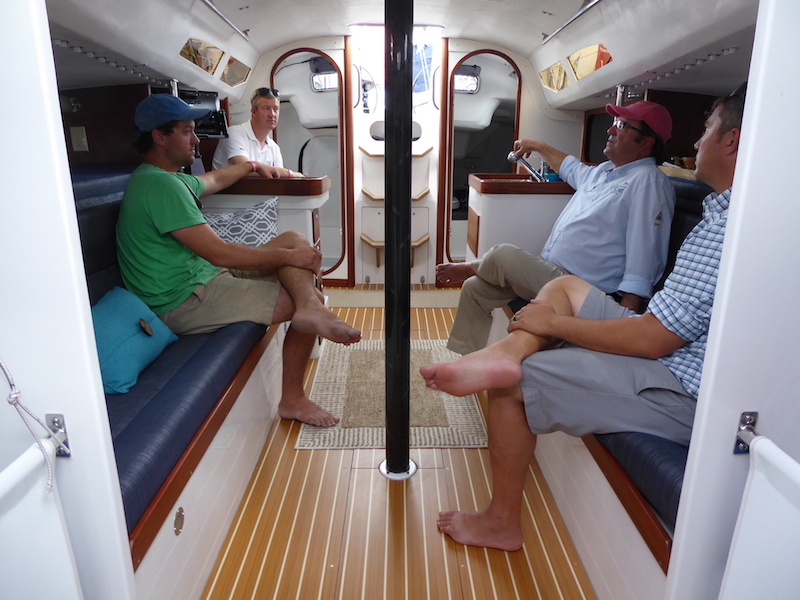 Stu Johnstone (in red hat) holds forth on the new J/121, which carries water ballast and is designed to be raced by smaller crews over more various short one-day distance courses rather than just around buoys. Although it obviously could do that too 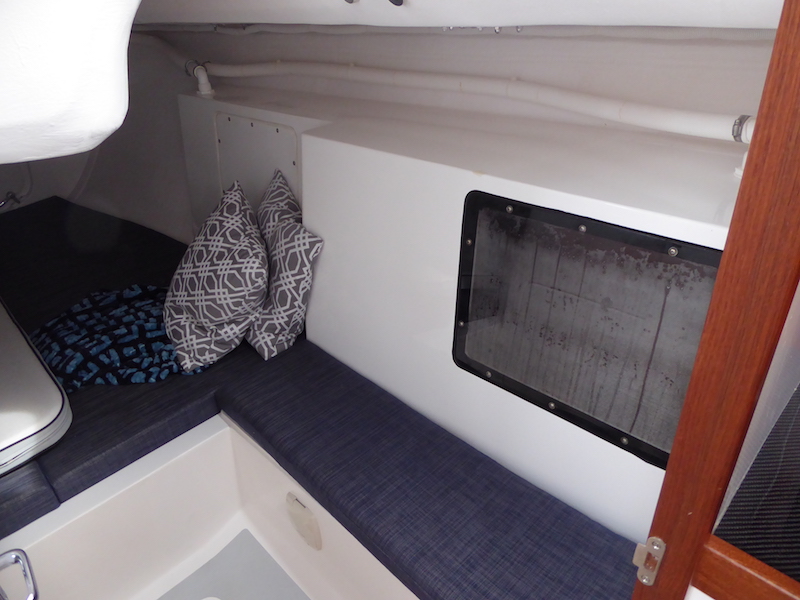 The water ballast tanks, I thought, are nicely integrated into the interior accommodations 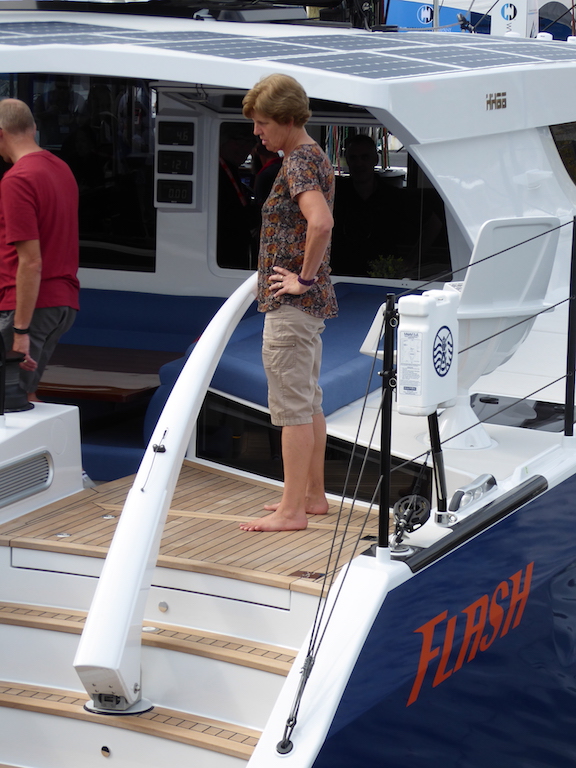 A massive tiller on the new HH66 performance cruising catamaran from China. Don’t worry, there’s a wheel too 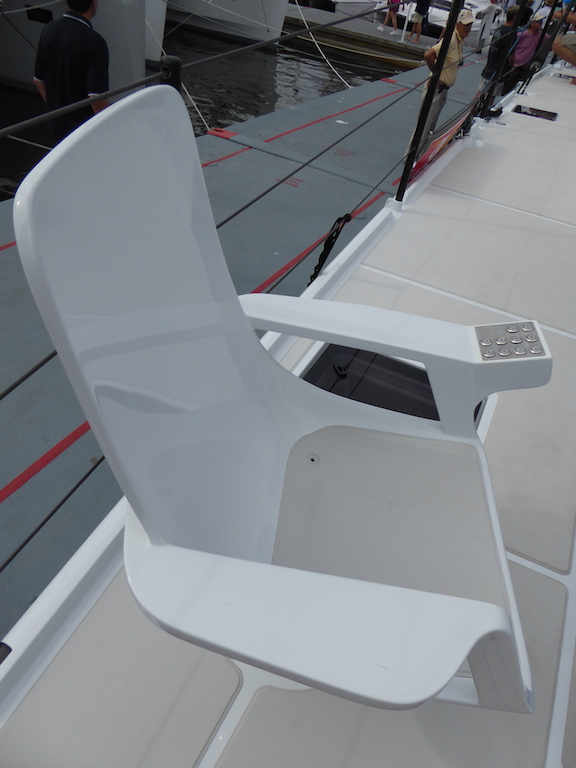 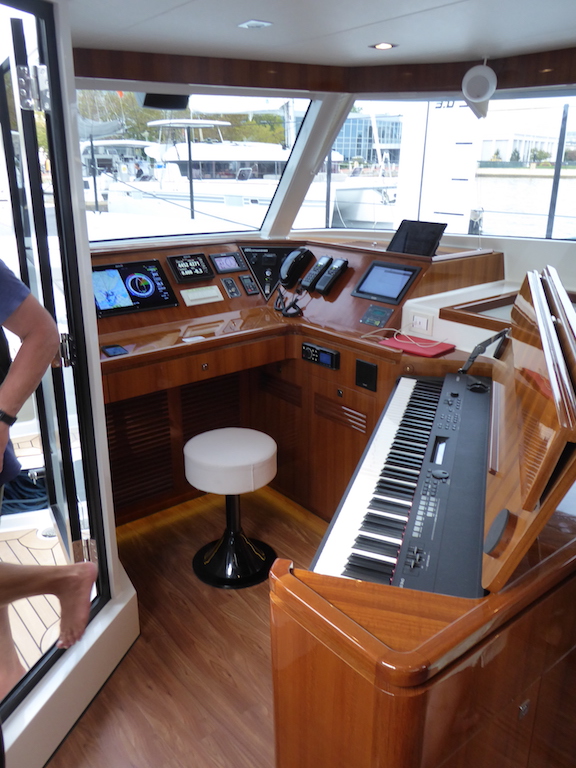 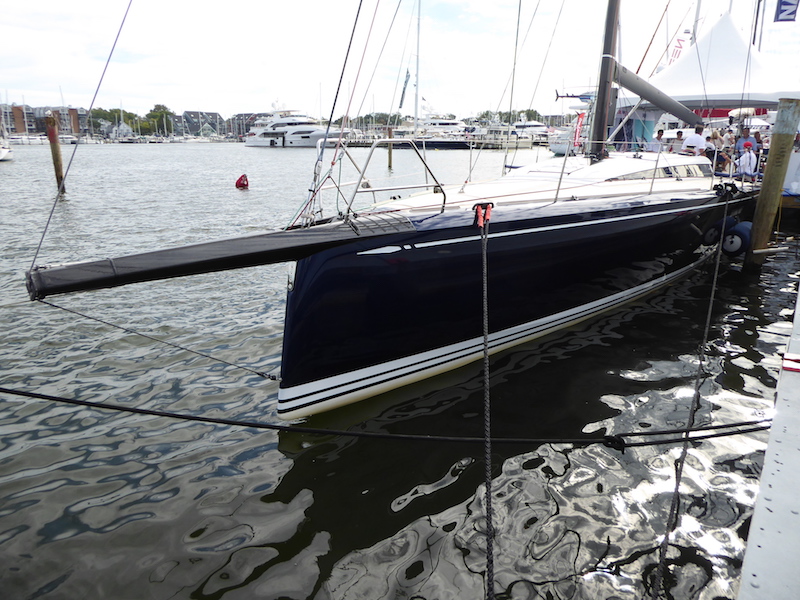 My personal favorite to-die-for new boat in the show was this Club Swan 50. A very sexy looking one-design sled in carbon fiber 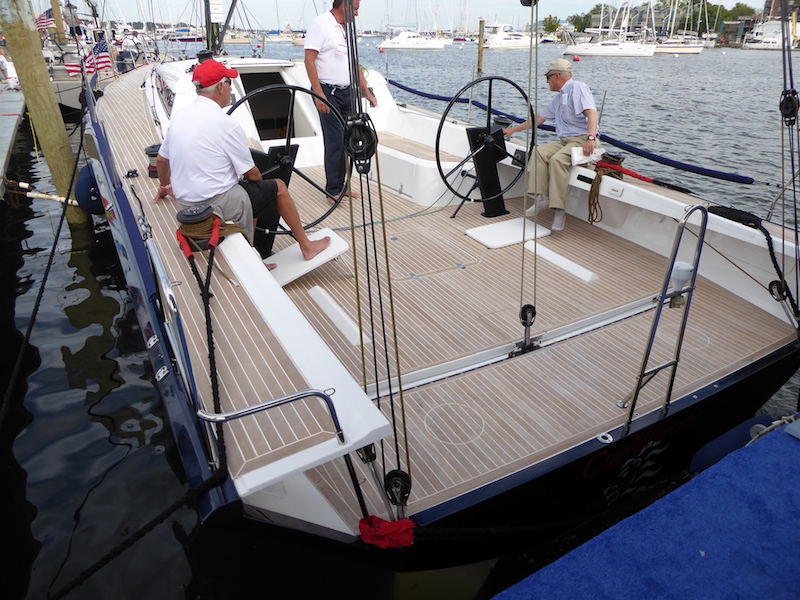 Back end of the same. Teak decks are class mandatory 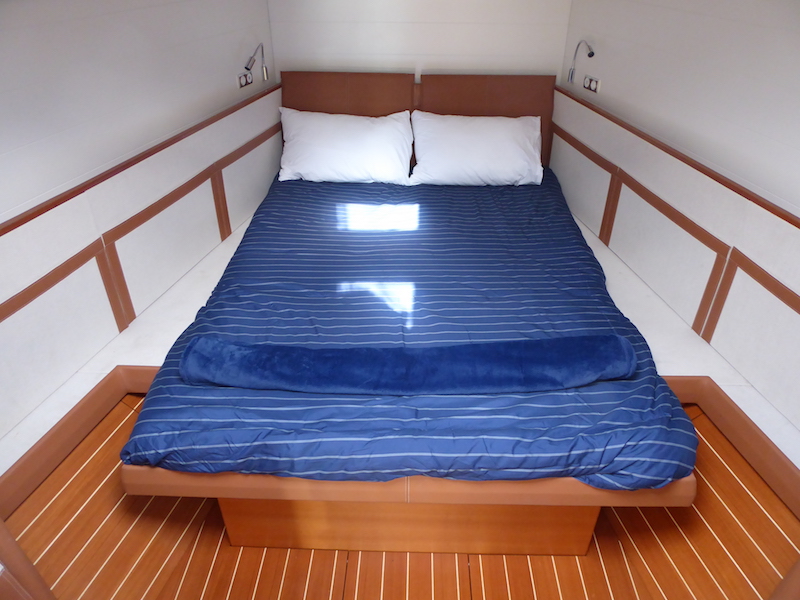 Down below the boat has minimalist, but very stylish accommodations. This forward owner’s stateroom converts to the sail locker when racing 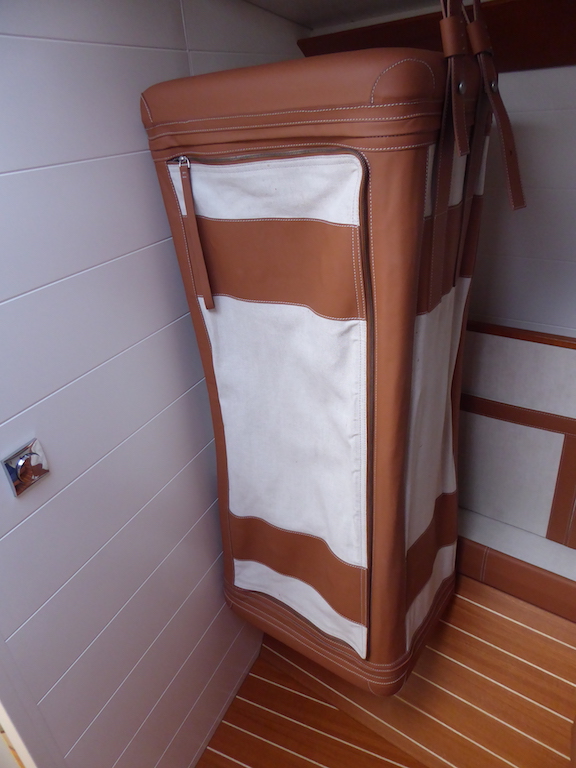 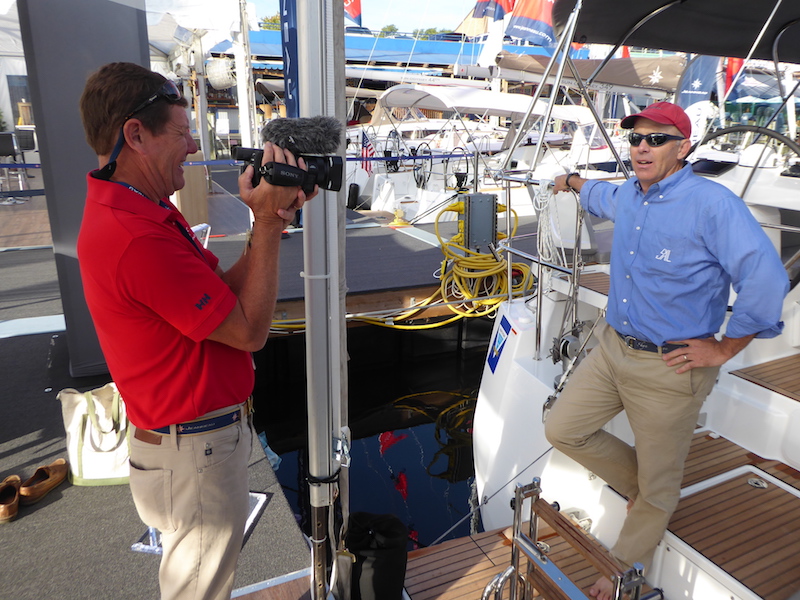 Talk about conflicts on interest! Our regular videographer got sick on day two of the show, so we enlisted Jeanneau’s Paul Fenn to help us make videos about the new Jeanneaus 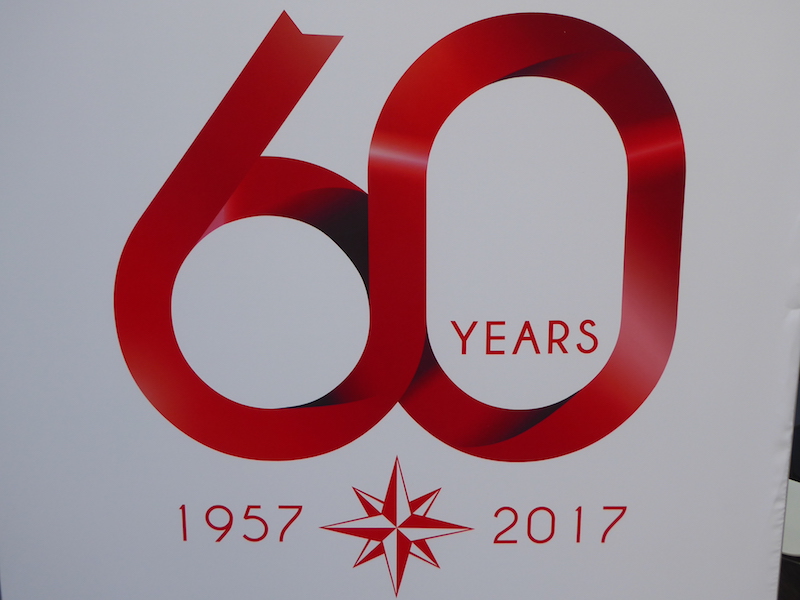 It is nice for Jeanneau, but a little depressing for me, that we both turn 60 this year 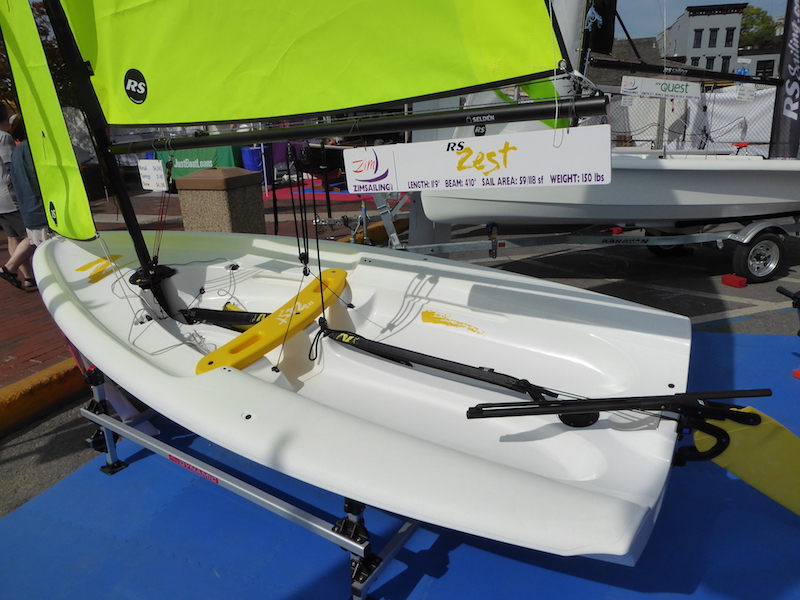 This was my favorite small boat in the show, the new RS Zest, an entry level training craft, which has lots of great features 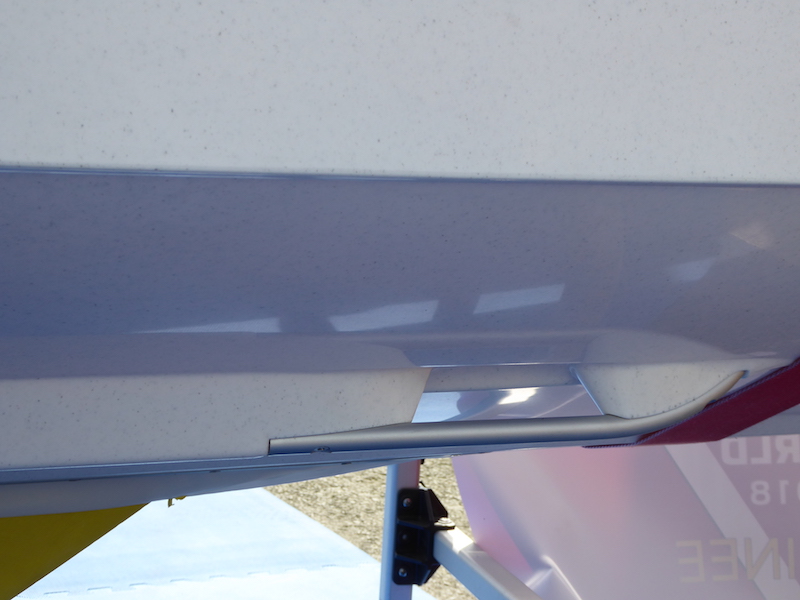 Including, for example, these grab rails on the bottom of the hull (they double as skid rails when you drag the boat up a beach). They bring back memories of all the time I spent as a boy flipping small sailboats… nearly half a century ago now

0Shares
boat showsBoreal 47new boats
Previous PostEYE OF THE STORM: Cleaning Up the Mess in the CaribbeanNext PostSEA NYMPH RESCUE: Two Crazy Ladies and Their Dogs Adrift for Five Months