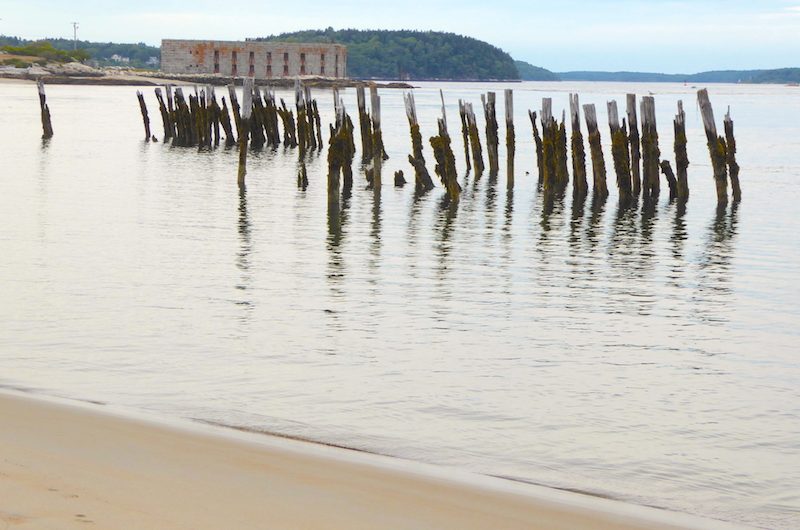 So, about that arrogant CEO I mentioned in my last post: this would be Jackson Parker, who runs a heavy construction company called Reed & Reed, based in Woolwich, Maine. About five years ago Mr. Parker built himself a McMansion on Popham Beach–he calls it a “cottage,” in the best tradition of the old Newport elite down in Rhode Island–just down the beach from a small house owned by my aunt. WaveTrain riders with long memories may recall this is the house where my mom died over seven years ago.

Since buying his property and building his cottage Mr. Parker has decided he does not like a collection of old steamboat pier pilings (see photo up top) that jut up out of the water just off the beach, almost directly in front of my aunt’s house and just a short distance down from his. He may not like the look of them, or he may (as some contend) want to build a dock of his own, or, most likely I think, he may, as he claims he does, sincerely believe the pilings are causing the beach to erode.

So Mr. Parker has applied for and unfortunately has received a permit to remove the pilings, which are located on public property, in spite of the fact there is little or no evidence to support his erosion claim, and in spite of the fact that everyone else in town wants them to stay. This has made him the central figure in a local controversy that has recently invaded the pages of such large and distant newspapers as the Boston Globe. 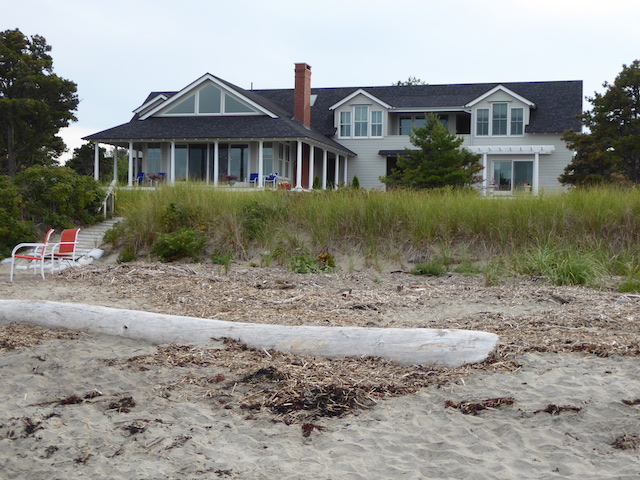 The humble abode of Mr. Parker. It is the fanciest house on a beach that, unlike the rest of the Maine coast, has seen very little over-the-top summer-home building. This photo was taken from the public beach in front of the house, a prospect Mr. Parker evidently finds threatening 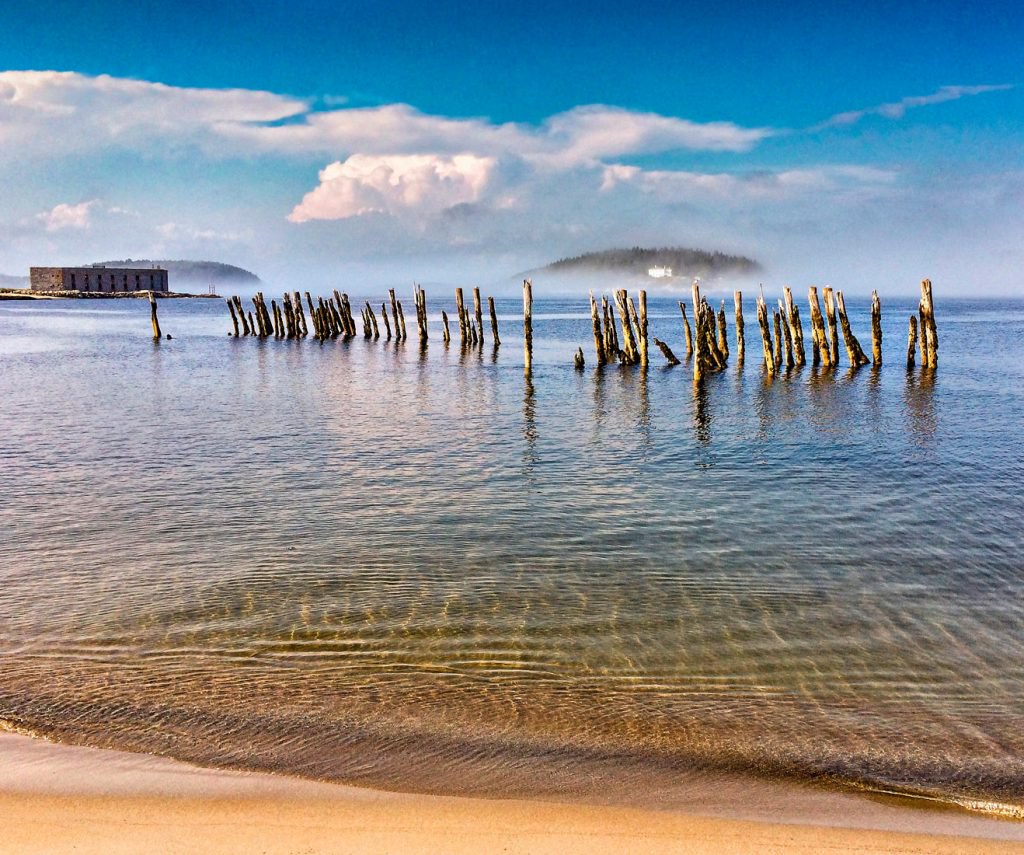 The pilings, a much more scenic view. Photo by David Spencer 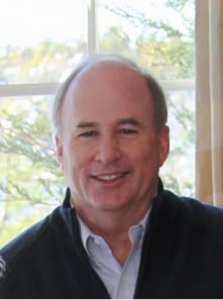 It is telling that in the original application for his piling removal permit, the appended report by Parker’s own hired experts, Ransom Consulting, noted that the amount of sand in this area of the beach had actually been increasing and that the beach there has historically been stable. But what is alarming is the more objective opinion offered by Dr. Stephen Dickson of the Maine Geological Survey, to the effect that it is impossible to say whether removing the pilings will help build up the beach and, more importantly, that their removal may in fact harm the beach and nearby buildings.

Everybody in Popham has been talking about how historic the pilings are, and it is true, they are. But Popham is littered with pilings west of Hunnewell Point (see the chartlet in my previous post) that can just as easily remind us of the days more than 100 years ago when steamships regularly arrived from Boston bearing hundreds of hotel guests. And yes, the pilings are very scenic and are indeed iconic in the minds of those who frequent the beach. But what I really worry about is the very destructive process of removing the pilings with a barge, a clamshell bucket, and a vibratory extractor, which is what Parker proposes. 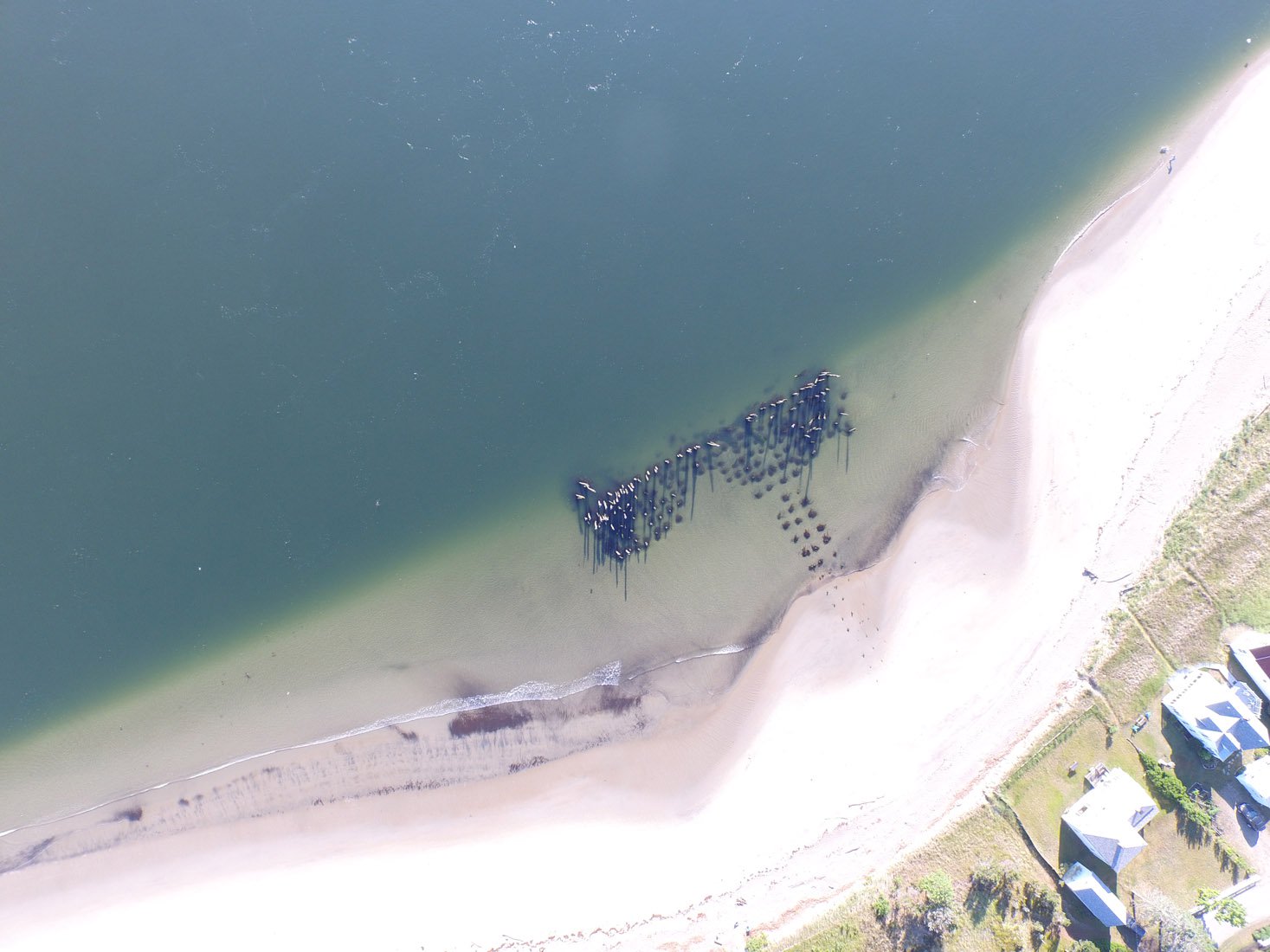 Aerial view of pilings. What Parker wants to do, near as I can tell, is dig a huge hole here. To me it seems likely the immediate effect will be negative. Perhaps severely so. Significantly, Parker’s house cannot be seen in this photo 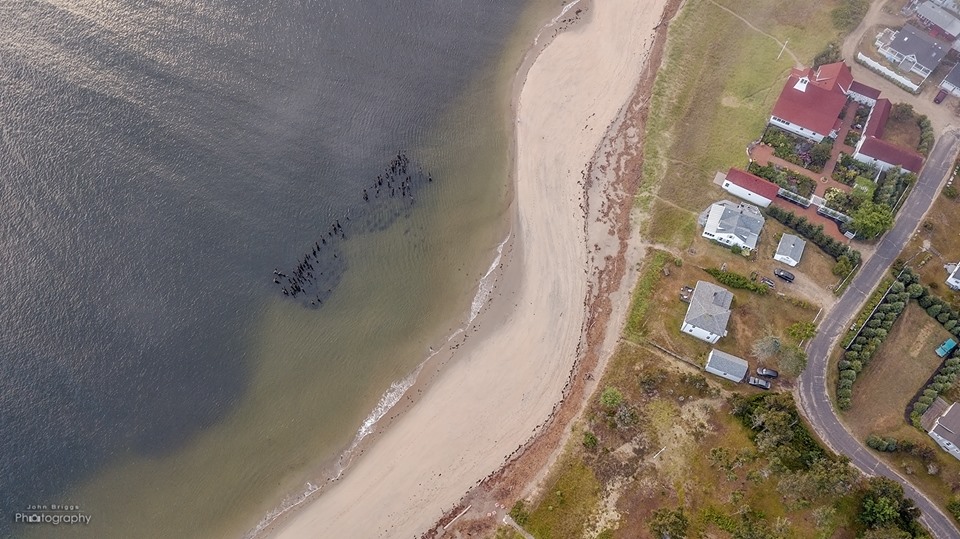 Another aerial view, courtesy of John Briggs. Note again Parker’s house is not close enough to the pilings to appear here. That’s my aunt’s house directly behind the pilings. There is a small vacant parcel, which once belonged to the steamship company that built the dock and now has no known owner, between her property and Parker’s, which is out of view below 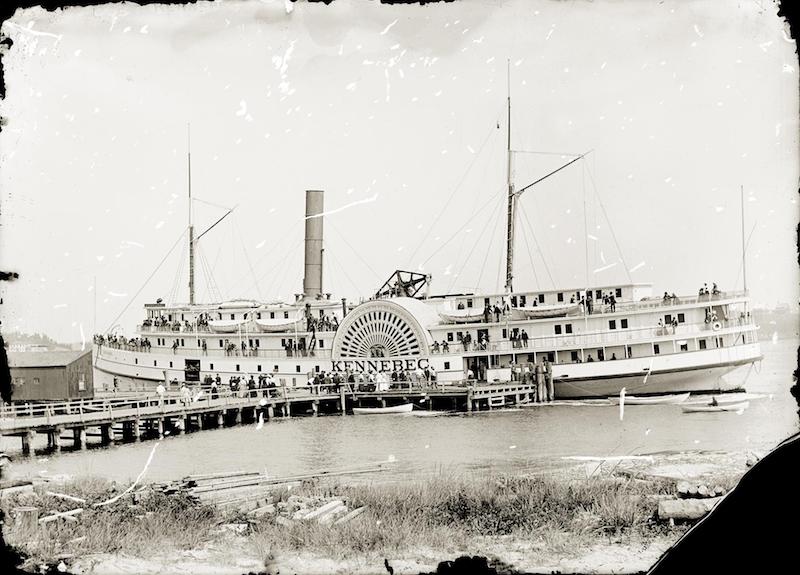 The pilings when they were a pier, over 100 years ago. In those days there were huge hotels on the beach and steamboats brought guests up from Boston every weekend in season. The hotels are long gone, but they are not forgotten

I can guess what has happened here. Mr. Parker has been watching the beach in front of his house for five whole years now and has seen it change. It is a beach after all; it cannot help but do that. I’ve been watching the beach my entire life, well over 50 years, and I am familiar with its patterns. The beach further south is incredibly dynamic, with wild gyrations of sand and water that have cost some people their houses and the state part of a parking lot (I described one dramatic variation in that post about my mom). But the beach behind the pilings has indeed been very stable: sometimes its angle gets steeper (which seems to be what’s happening now) and sometimes it gets shallower, but the dune line behind the sand has remained mostly unchanged.

Mr. Parker heads up a big successful heavy construction firm. He sees what he figures must be a problem on what he considers to be his beach, ponders the hammer he holds in his hand, and reckons this problem must be a nail. Time to use the hammer!

Parker and his firm, I am sure, have applied for many permits over the years and are well known to the people who issue them. Little wonder then that Parker should have little trouble obtaining this one, pertaining to such a seemingly trivial matter. But I suspect he has been taken aback by the very negative public reaction, and by the publicity, and is now feeling defensive.

At least he seemed that way to me when he sprang out of his house like a jack-in-the-box to confront me when he saw me on the beach last week taking photos of the pilings and the houses behind them. We had a rather circular conversation about the pilings and whether I was invading his privacy. At the end of it I asked him if he stood ready to compensate people if his removal project damaged their property, and he proudly answered no.

The next day, having stalked me online, Parker sent a note to the publisher of SAIL, accusing me of being a stalker, and suggesting I should be fired.

The good news is the permit approval has been appealed. The town is making all the obvious arguments: Parker has no legal interest in or right to the pilings (which in fact belong to the state); his erosion evidence is very thin; the project may harm other people’s property; everyone likes the pilings, for both historic and aesthetic reasons. Etc.

Hopefully the appropriate governmental persons will rethink their position and do the right thing. Hopefully Mr. Parker will calm down a bit. Hopefully the folks at Reed & Reed, or whoever is slated to perform the removal, will ponder the liability they may incur if things go wrong. Hopefully I won’t get fired. Hopefully the pilings will remain and will be allowed to wear away, bit by bit, as I have watched them do my entire life, just like my mother before me.