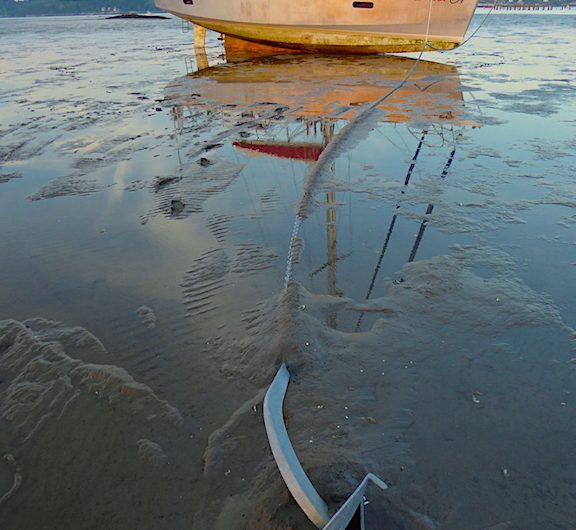 I’ve been looking forward to doing this ever since I got this boat. Mind you, I’ve done it before on another boat. My old Golden Hind 31, Sophie, conceived by Maurice Griffiths, a true shoal-draft aficionado, had three keels (one shallow full keel on centerline, plus two small auxiliary bilge keels) and was designed to take the ground with impunity. So I tried drying her out, once, in the St. George River off Thomaston in Maine. I did not know the ground there, and it turned out the mud flat I grounded her on was composed of very (very) soft mud. When the tide was out she was sucked way down into it, bow first, and I was afraid it would never let her go.

Lesson learned: before parking your boat on the inter-tidal littoral, you should know what it consists of.

In pondering where to beach Lunacy (she has a fully integral centerboard that pulls all the way up into her hull), I quickly concluded it was best to go to the one spot on the Maine coast where I know the mud best.

I did not proceed there directly. The first afternoon of my solo mini-cruise last week saw me mostly motoring over to Small Point Harbor, during which transit I spied a whale, the first time I’ve ever seen one in Casco Bay. In SPH, meanwhile, there was insane fish action. While entering I puttered right through an enormous fish boil, strong enough I reckon to have lifted a small skiff right out of the water. After I anchored, I watched fish flipping around on the surface all around me for an hour or more. Saw more of the same on pulling myself into the cockpit with a cup of coffee the following morning. 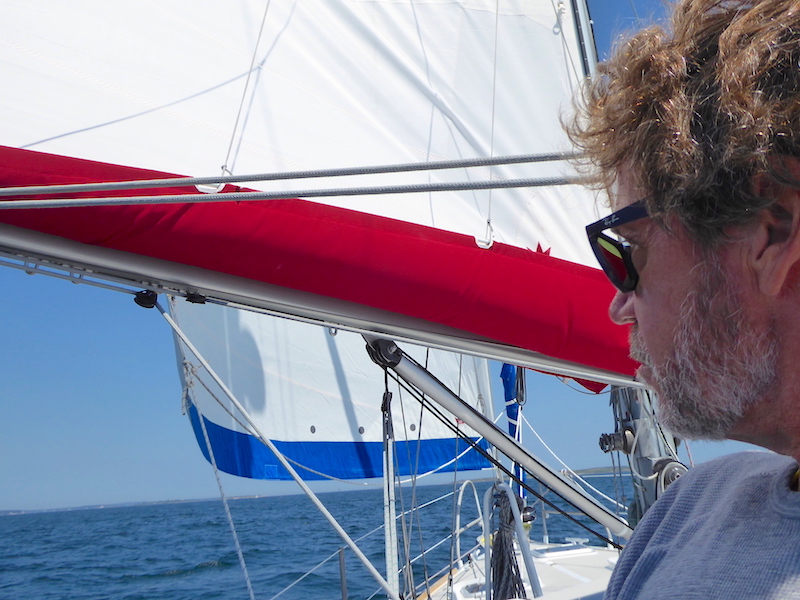 The afternoon of day two found me reaching and then broad reaching all the way from Cape Small, just south of Small Point Harbor, past Seguin and Damariscove Islands, and then running under main alone up Johns Bay, just east of the Damariscotta River entrance. A fantastic sail! 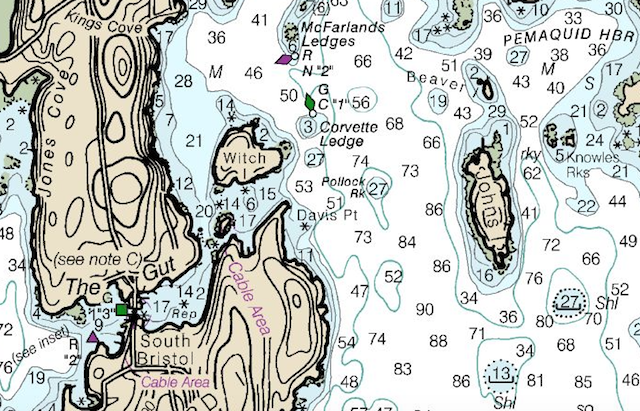 I picked up a vacant mooring behind Witch Island, on the east side of the Gut at South Bristol, then did some gunkholing in the dinghy. 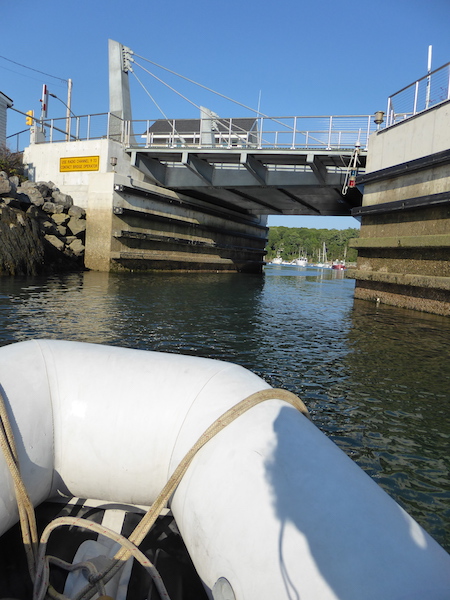 The brand new lift bridge at South Bristol, as seen from the water 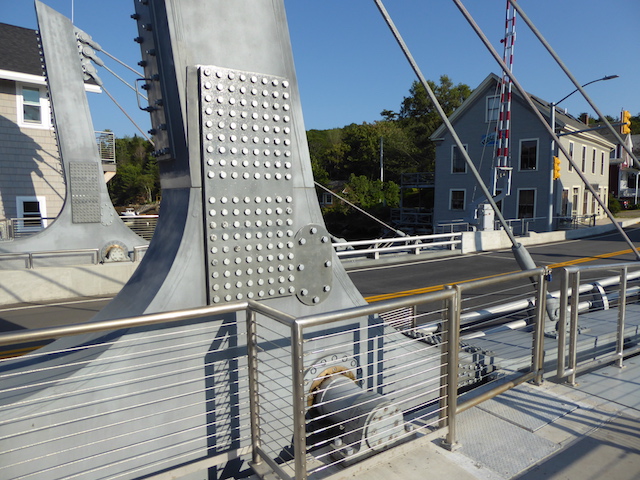 As seen from on shore. It looks very “bolted together” doesn’t it? 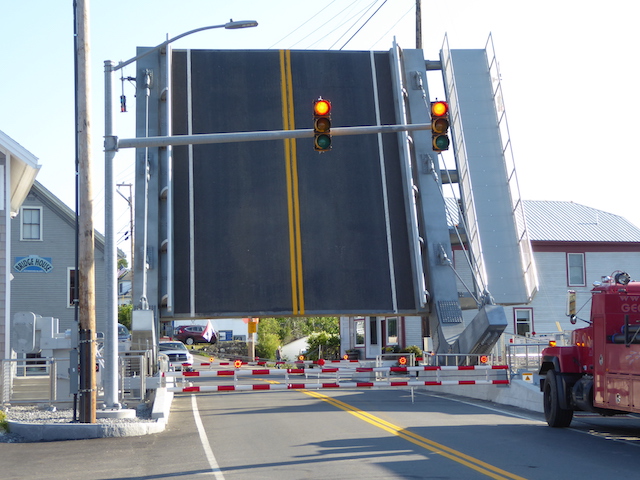 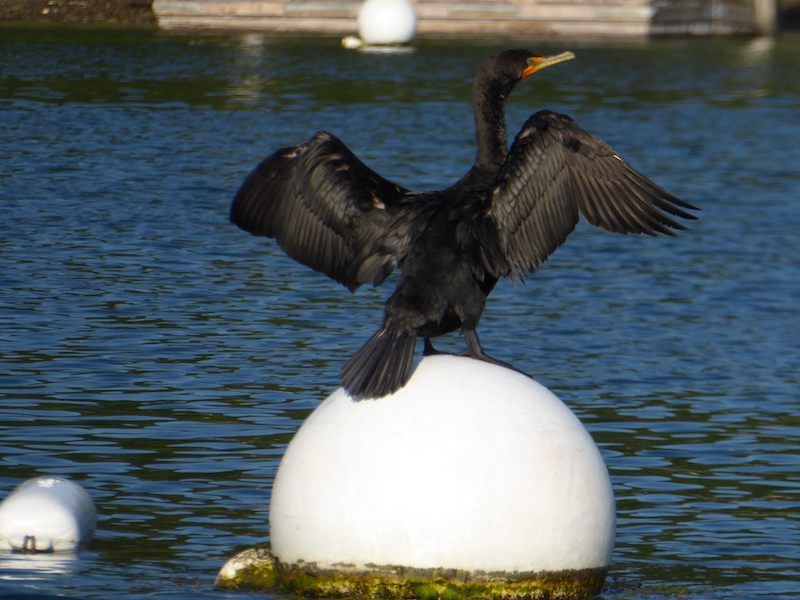 A cormorant dries its wings. They need to do this because, unlike geese, ducks, and most other waterfowl, cormorants have no gland secreting oil to keep their feathers from getting soaked when swimming. The downside is they have to stand around like this for a while after diving for fish. The upside is that they can dive much deeper than other birds

I waited until nearly noon the following day before dropping the mooring, on the assumption that a southerly sea breeze would soon make up and help whisk me back west along the coast.

But no. The breeze never materialized, in spite of it being a hot sunny day, and in spite of the nice bank of clouds I could see rising off the warming land to the north. The last two or three years I’ve seen this more and more on this stretch of the Maine coast: sea breeze conditions, but no breeze.

I had to motor extra hard to make it to Popham Beach, my designated drying-out venue, before the tide turned and started ebbing hard in the late afternoon. 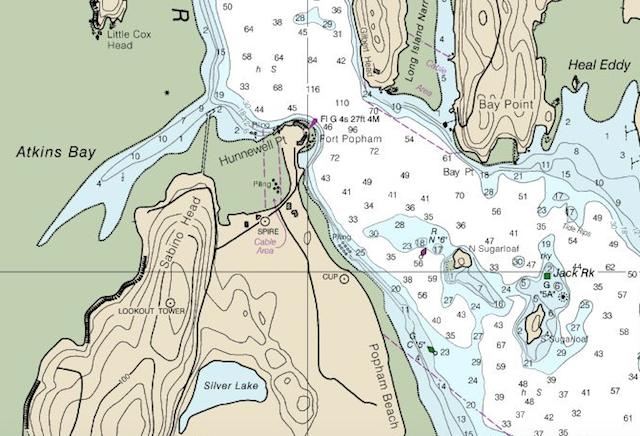 The venue as charted. I debated whether to ground out on the hard sandflat just east of Gilbert Head (I used to play there as a child) or the softer mudflat in Atkins Bay, north of the channel and south of Little Cox Head (I’ve been accidentally aground there a few times). I ruled out the flat just west of Hunnewell Point, as there is a fair bit of debris and junk on the ground in there, and I couldn’t be sure I wouldn’t end up on top of some of it 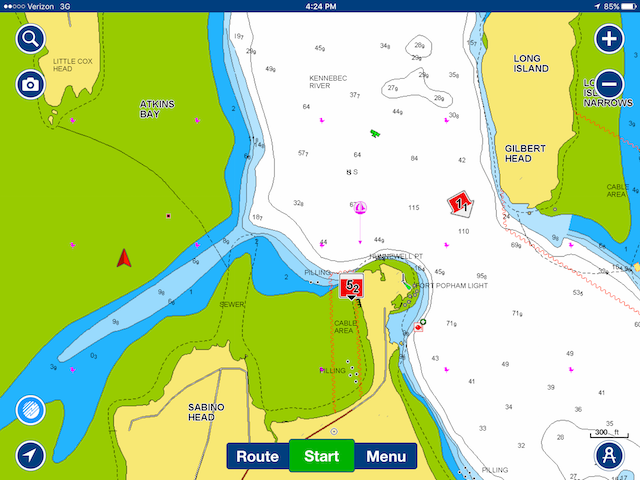 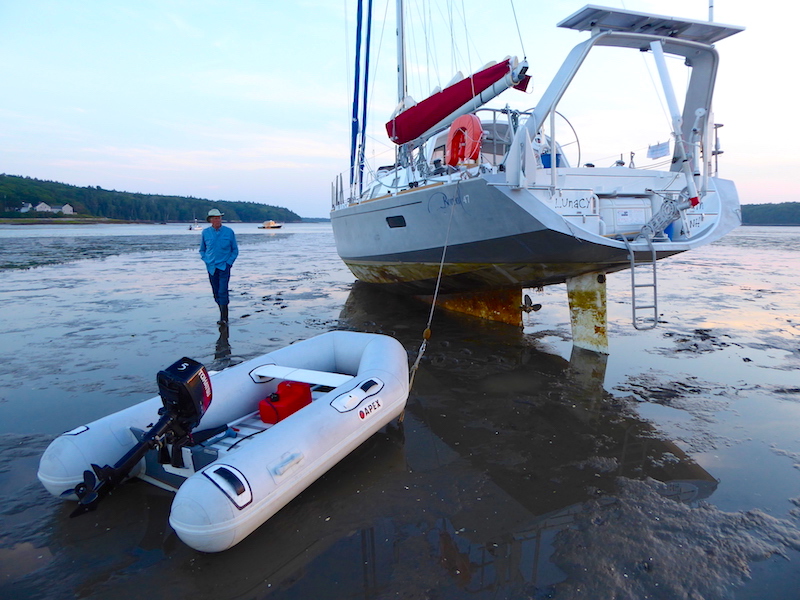 After the water left, not long before sunset. The guy in the hat pulled on some boots and marched out across the flat from a house on Little Cox Head to admire the boat and have a friendly chat 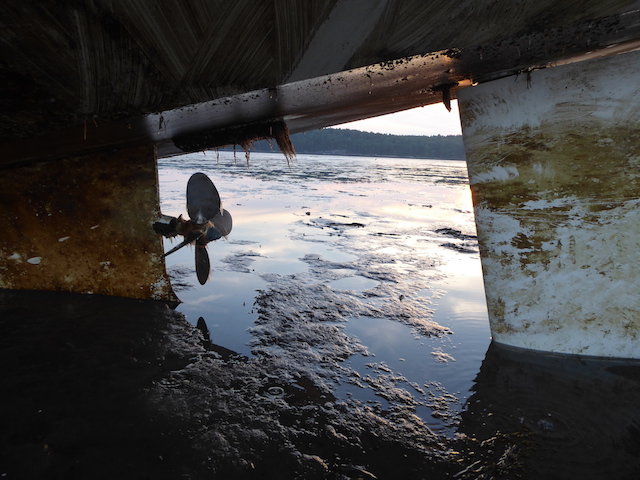 I never knew I had a four-bladed prop! That thing you see in front of the rudder is a knife blade. I had explained to the French (actually Belgian) builders that I wanted a weed-cutter there, to keep out pot warps, and described it as being “like a knife.” So they put a knife there

Being aboard a boat as it grounds out and then floats again is an interesting experience. You need to think of things you normally don’t think about.

Example one: I did remember to shut off the water-cooled refrigeration unit, after the boat stopped floating, but before the water went away. I was wakened that night, around midnight, by the subtle sensation of the boat floating again and thought to turn on the fridge again. I had to open the strainer and prime the line before the pump would run properly, however, as I’d left the intake valve open and the water in the line had all drained out. To be sure I woke up in time to turn the fridge off again, I set my alarm for 0520, but this proved unnecessary. The sensation of the boat grounding again woke me promptly at 0510. This time I thought to close the intake after shutting down the fridge, and I indeed did not have to prime the line when I turned it on again when the boat refloated.

Example two: I did not consider the fact that the dinghy would float long before the boat did and left it tied off astern. The boat had grounded in line with the current, broadside to the light breeze, and when the dinghy refloated it got blown across the back of the boat and was trapped under its transom as the water continued to rise. Fortunately, I discovered this in time and managed to free the dinghy, at midnight, with no clothes on, before any harm was done. Moral of the story: tie off the dink amidships!

The boat was all dried out (a second time) by the time I finished breakfast the next morning, so I immediately set to work scrubbing the bottom with a long-handled brush I had thought to bring along. The mud was soft enough to grab my feet sometimes, which was annoying and tiring, but there were also a few pools of water around for me to clean my brush in, which was convenient.

After I finished scrubbing (it took about two hours) I roamed around the flat a bit and discovered a more ideal location for the job–on much firmer grounder, but close to a rivulet of water draining the flat. My conclusion was the best way to do this, even on a flat you know, would be to scout first on foot at low tide, set a dinghy anchor with a float to mark the spot where you want to dry out, then bring the boat there on the next high tide. 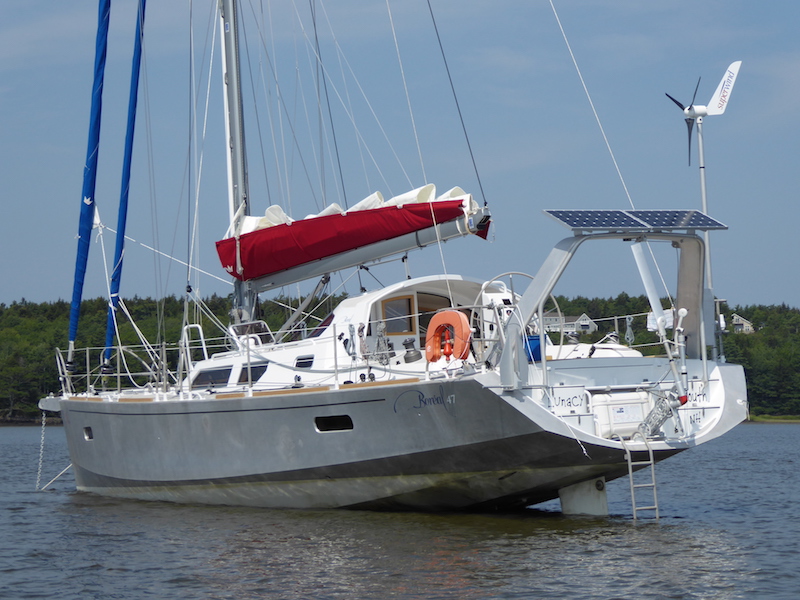 That afternoon I took a stroll on the beach and had an unpleasant encounter with an arrogant CEO who owns the fanciest “cottage” in town and is a figure of local controversy.

More on that in our next episode. 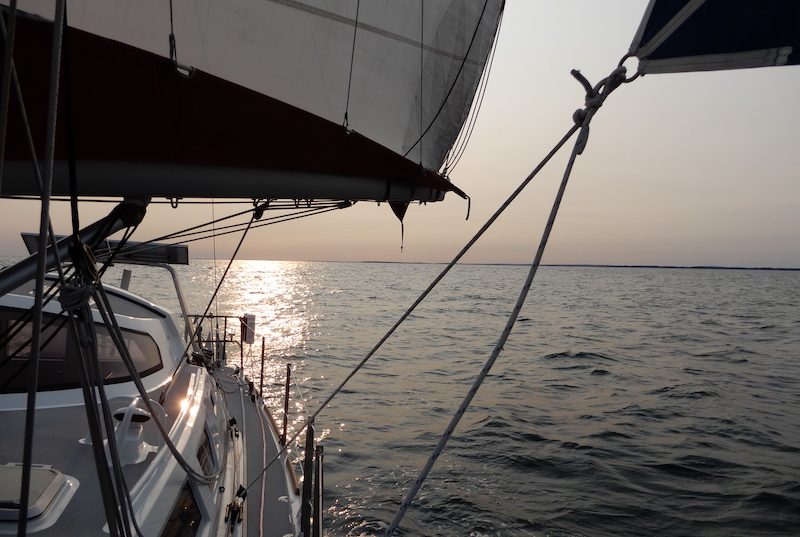