I noticed this story a few days ago and finally found the time to study the available facts. This takes some concentration as the writing style of Belinda Govatos, the sailor/blogger who suffered through these events with her family and diligently recorded them on her website, Adventures of a Tribe, doesn’t seem to involve paragraphs. The story begins on the night of July 18, when according to Belinda’s account her husband Danny was keeping close watch on deck while she prepared dinner as their Leopard 46 catamaran Tanda Malaika, outbound from Mo’orea in French Polynesia, approached the atoll of Huahine.

“We were moving at a speed of about 8-9 knots,” she wrote, “with the jib out and both engines running. Danny was watching the navigation instruments when he noticed the depth gauge suddenly drop from 180ft to 0, and he tried turning the helm hard to port realizing that an unmarked reef was ahead. It was at that point that we all felt Tanda Malaika violently hit reef.”

The family was evacuated by helicopter that very night and on reaching safety ashore Belinda was questioned by the local authorities:

When they asked us what happened and we told them that our chart did not show reef, they asked us if we had been using Navionic charts, and I said yes. He then shook his head and said that at least five boats end up on those reefs a year who were using Navionic charts. They walked me over to a large map on the wall and told me to point exactly to where Tanda Malaika was, and I did to the best of my knowledge. They then pointed to two places, our spot being one of them, that all the wrecks seem to happen, then gave us the name of a man who we could call for salvage help. The word ‘salvage’ seemed so cold and final. It sounded to me like death. Had Tanda Malaika really just completed her final sail?

Navionics has responded to this in a comment to a report on Noonsite, spouting the predictable palaver about not over-relying on single sources of information and not approaching reefs at night. Lectronic Latitude, meanwhile, has done some deeper dissection, noting it may be that Navionics charts running on an iPad are more accurate than Navionics charts running on a dedicated chartplotter. Which seems perverse, I have to say.

Plotting the GPS wreck coordinates cited by Belinda in her blog – 16°49’47” S, 150°59’41” W – we see that the reef in question, though its precise position may not have been accurately charted, most certainly can’t have been unanticipated. It is a very major reef and totally encircles the islands that make up Huahine. 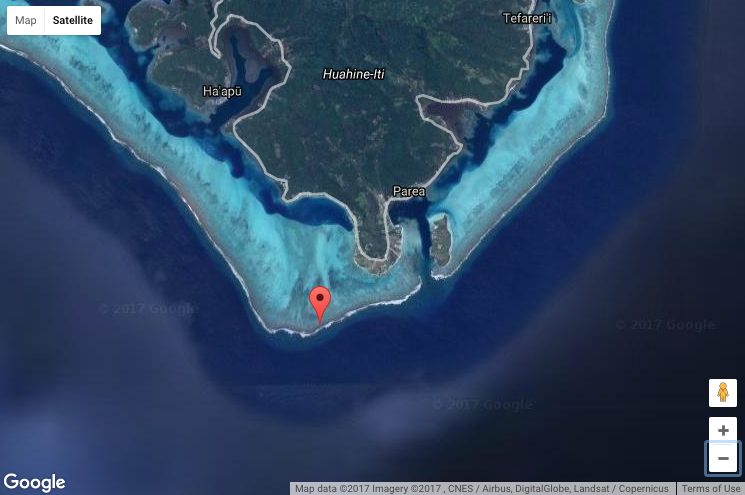 Map of Huahine with reefs shown

Mo’orea, from whence came Tanda Malaika, is southeast of Huahine. Presumably skipper Danny was trying to clear the southern corner of the atoll reef and then planned to move up its western lee side to Fare, which is the local capital. What we don’t know is how far off the reef he thought he was when his boat hit the bricks. 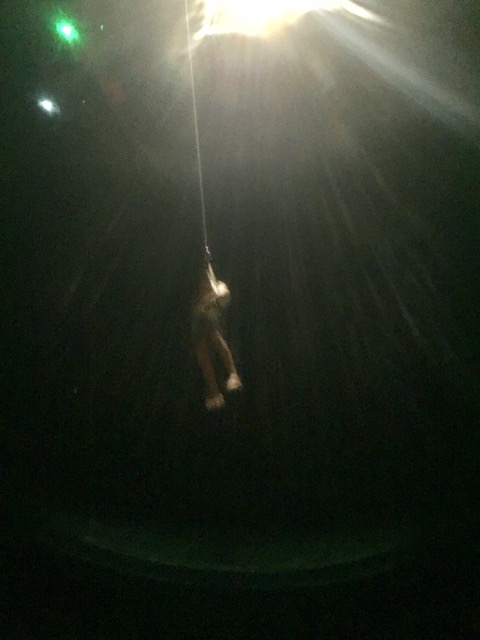 One of the “creatures,” as Belinda fondly calls her children, is hauled up off the boat into a helicopter the night of the wreck. Not a scene any mother wants to witness! 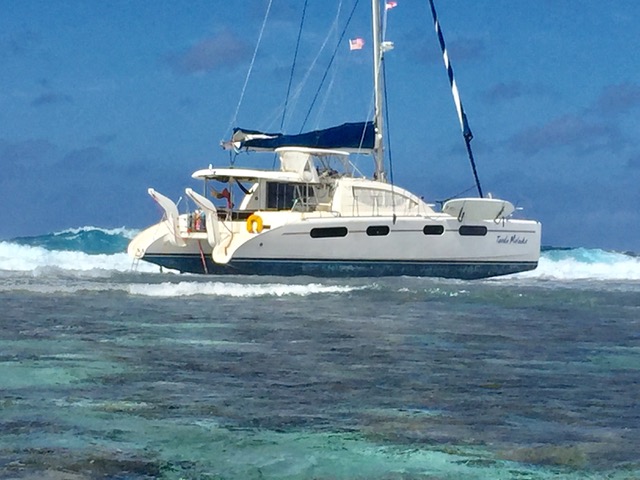 Tanda Malaika up on the reef come daylight 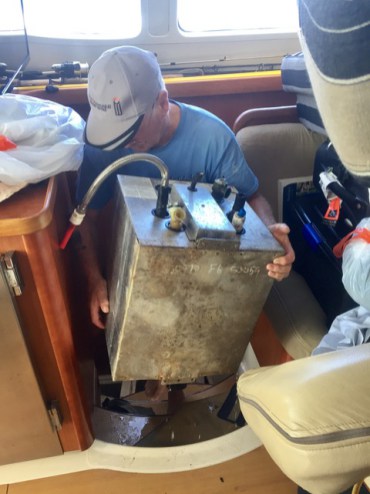 Gone are the days when you can just leave a wreck on a reef. With the help of other cruisers the crew of Tanda Malaika worked for days to remove everything of value from their boat. Having determined the wreck could not be refloated and refit, they were then expected to hire a salvage crew to pull the boat off the reef and sink it in deep water, at an anticipated cost of at least $35K US 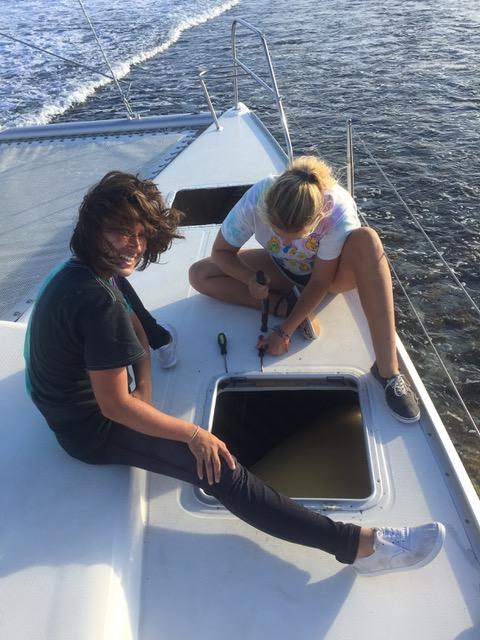 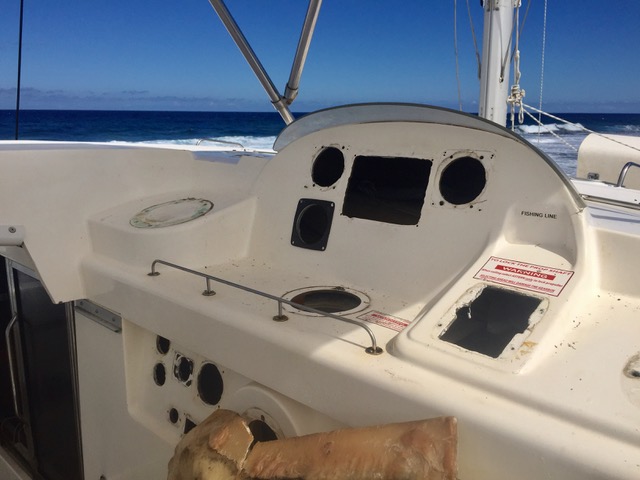 My own best practice now is to run at least two different sets of electronic charts–one (or two, if you count the free government charts now included with Navionics packages) on my iPad and another on a dedicated plotter–plus follow along on a regular paper chart. The best thing about electronic charts, I’ve found, is that they make it much easier to carry entirely different sets of charts for any given locale. I love to take advantage of this. Comparing different charts to each other you soon realize how often they disagree with each other, and this does tend to inspire caution when navigating.

On electronic charts you also do need to zoom in and out on areas of interest, as different sorts of information may be deleted from charts at different zoom levels (remember, for example, the Vestas Wind disaster in the last Volvo race). And, yes, you do need to bear in mind that all charts based on an originally inaccurate survey will themselves be inaccurate. Just because satellites can pinpoint your position doesn’t mean the positions of hazards on the charts you are looking at, even the electronic ones, have been plotted with similar accuracy.

Bottom line: I agree with Navionics that they can’t really be held to blame for this accident. I would say, however, given the statement made to Belinda Govatos by the local powers-that-be on Huahine, they have definitely been put on notice that there’s a big problem with their cartography in that area.

Once a chart publisher knows its product is inaccurate, there is a very good argument to be made they then have a responsibility to correct the error. Garmin, which has continued to publish the famous magenta line on its charts of the ICW, even after the government deleted the line from its charts because it was deemed misleading, is currently a defendant in a lawsuit that raises this very issue. You can read all about it in this fascinating Passagemaker post by Peter Swanson, who is being called as a witness in the case.

The skipper in this case was not entirely blameless. He was running the magenta line on his Garmin chartplotter down the St. Lucie channel at 21 knots (a powerboater, of course). Even when the line took him wrong side of a channel marker, he didn’t think to slow down, and his wife unfortunately suffered grievous injuries when they ran aground at speed. Still, I’ll be surprised if Garmin walks away from this litigation unscathed.

(All photos here are from Adventures of a Tribe)

ADMINISTRATIVE NOTE: It is bad enough that Russian hackers have saddled us with this ridiculous president; now they are attacking my website! Very early this a.m. I was swamped with thousands of messages sent through this site from some Russian source (in Russian, no less). I had to turn off the Contact Charles buttons on the site to stem the flood. Don’t know how long they’ll be down. Meanwhile, we can chat through the comments section if you like.