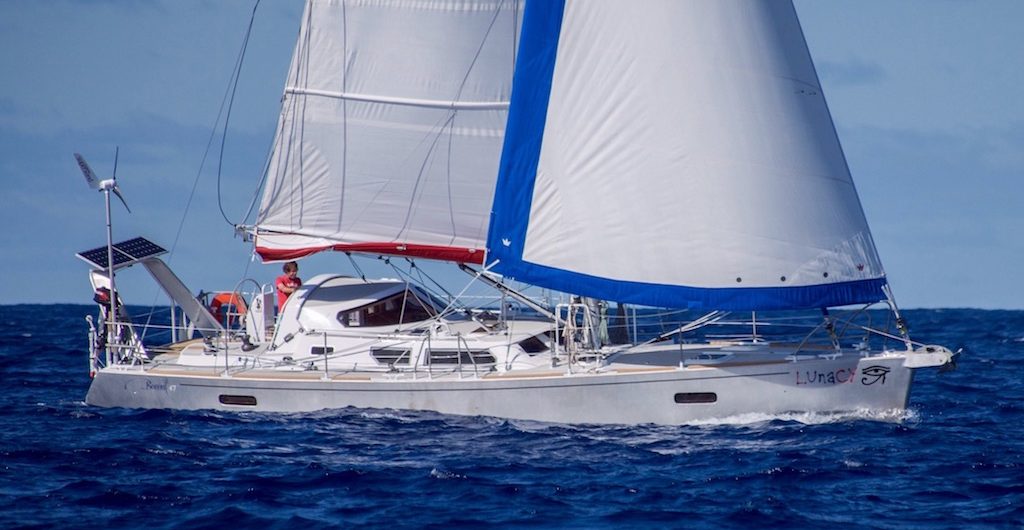 Now that I’ve got the new boat on the Left Side of the Pond I’m starting to think seriously about how I’d like to change it. Of course, I’ve been thinking about making changes all along, even before I accepted delivery, but I do believe you should first spend some time sailing a boat the way its builder and designer intended before you start mucking with things. Presumably they had their reasons for doing what they did, and you should strive to understand those before making alterations.

My first modification pertains to the mainsheet, the run of which can be easily followed in this fantastic photo taken by Clint Davis, from a boat called Corsair, when we crossed paths between Bermuda and Newport last month. Many thanks to Clint for sharing this (and a few other pix)! It is always great thing when you can score off-the-boat images of your own boat under sail.

Here’s a close-up view of the original mainsheet run: 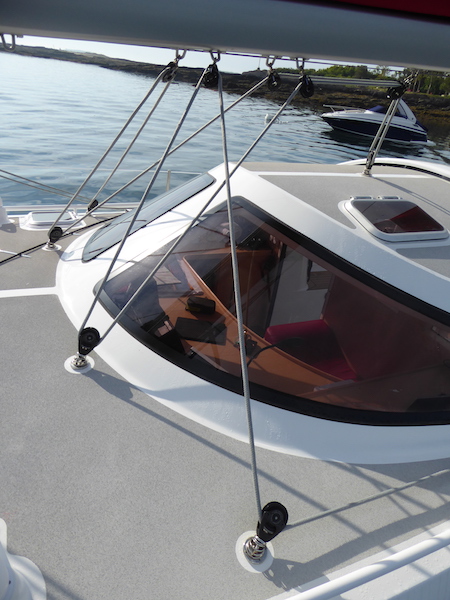 This is a complex eight-part rig for a double-ended sheet that runs to pretty beefy winches on either side of the cockpit. The advantage of having so many parts, of course, is that you get a lot more leverage when hauling in the line, but the disadvantages are: a) you have to haul in a lot more line to enjoy the advantage; b) there’s a lot more friction in the run, which makes it harder to ease the sheet in light-to-moderate conditions; and c) it is much easier for the parts of the line to twist around each other as the sheet is being worked. With this rig, I found during our transatlantic trip, that last point was particularly troublesome. To minimize the twisting it was necessary to flake out the sheet in figure-8 coils almost every time we made an adjustment to it. This is OK on racing boats, where crews are large and like to show off doing that sort of thing, but is less OK on a cruising boat, where crews are smaller and lazier.

I scratched my head for a while pondering how to simplify the run and came up with this: 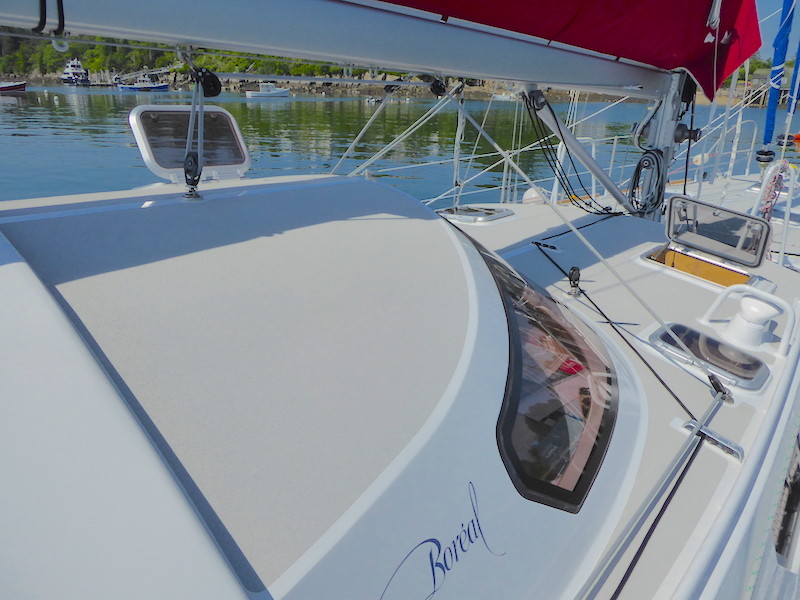 A very straightforward four-part run with four fewer blocks involved. A lot less friction and a lot less potential for twisties, but also, of course, a lot less mechanical advantage. I’m not too worried about that, because of those winches I mentioned, but we’ll see how it goes. So far I’ve only tried it in light conditions, where it works much better than the original rig. The real question is how it will work in heavy air.

The next rigging mod, once I can get someone to haul me up the mast, is to make the two-part main halyard and one-part halyard and see how that works.

Meanwhile, I’ve got the boat parked at the Maine Yacht Center, where hopefully we will come up with a Final Solution to the flooded-engine problem. I’ll give you a full rundown on that when the time comes.