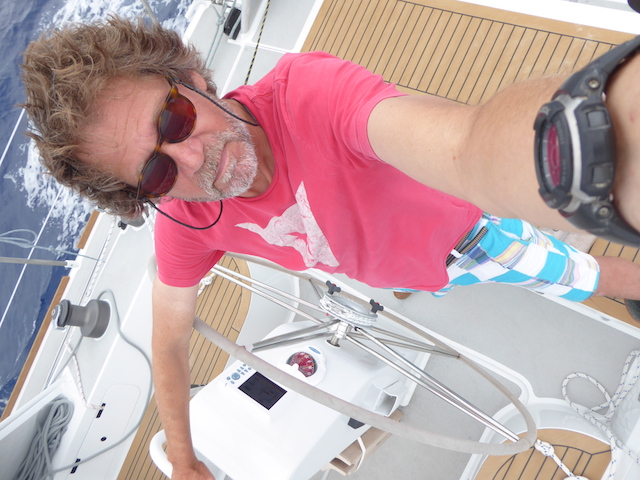 It’s over… at long last! My seventh transat done and dusted. This has been true for nearly a week now and still I’m waking up in a bed in a house every morning in a confused wobbly-footed fuzzy-headed daze feeling like I just stepped ashore.

I must be getting old or something.

I ended up doing the last open-ocean leg, from Bermuda to Newport, all on my own as my stalwart crew was running low on time by the time we got our various problems sorted out in St. Georges. With the engine again fully operational (no word yet on a final solution to make sure it is never flooded again) I headed out solo through Town Cut on Tuesday June 13 and was immediately confronted with a superyacht regatta, part of the big America’s Cup rumpus, that was being run off the northeast corner of the island. 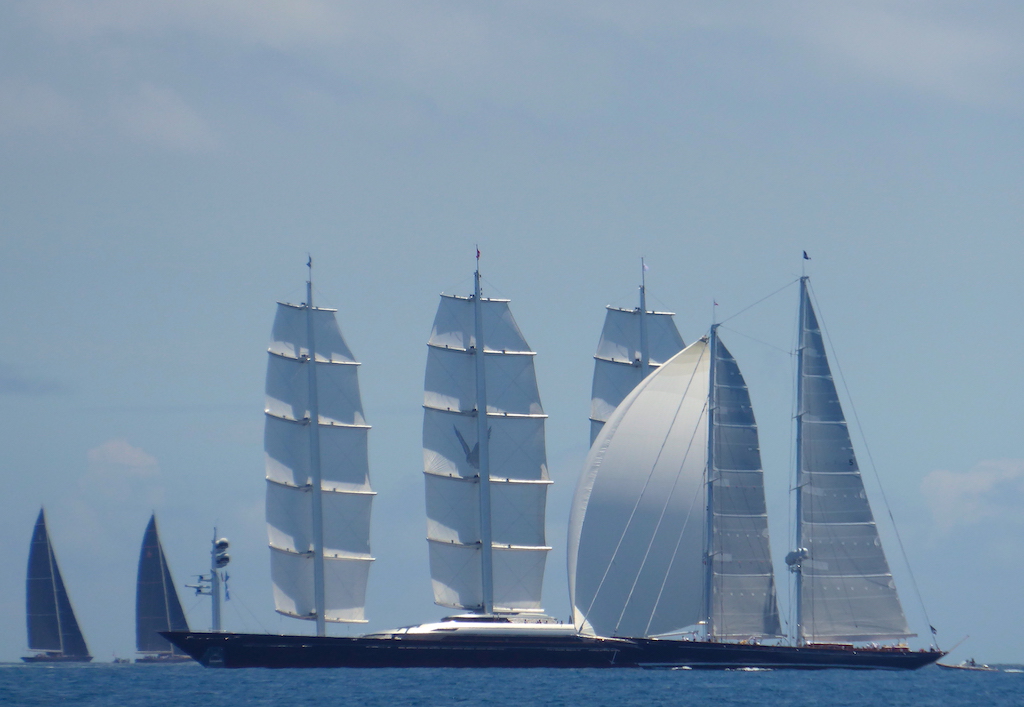 Running with the big dogs. You’ll recognize Maltese Falcon, no doubt. One thing I noticed: she is painfully slow. All other superyachts had no trouble passing her up

Because of this daze I’m in, and because I don’t have my log in front of me right now, the four-day passage to Newport is something of a blur in my mind. I remember having to motor for a bit in the beginning, as conditions were light. And I remember exulting in the fact that I could motor!

I remember too I didn’t get much sleep the first night, because of all the other yachts I passed that were going south to Bermuda. I passed within sight of my old buddy Hank Schmitt on the Swan 48 Avocation, as he was leading his Rally to the Cup down to see the AC action. Indeed, we both had to change course so as not to run into each other and had a nice chat on the radio. (How’s that for a small-world coincidence?) Then came the huge becalmed flock of the Marion-Bermuda Race fleet.

When the wind did come it was from the northeast, at a delicious angle on the beam. I’d forgotten such things were possible. Easy sailing at last. I caught some positive current from a big cold eddy south of the Gulf Stream, had a bumpy ride across the Stream itself, what with the current running against the wind, but then eased into the continental shelf at speed. 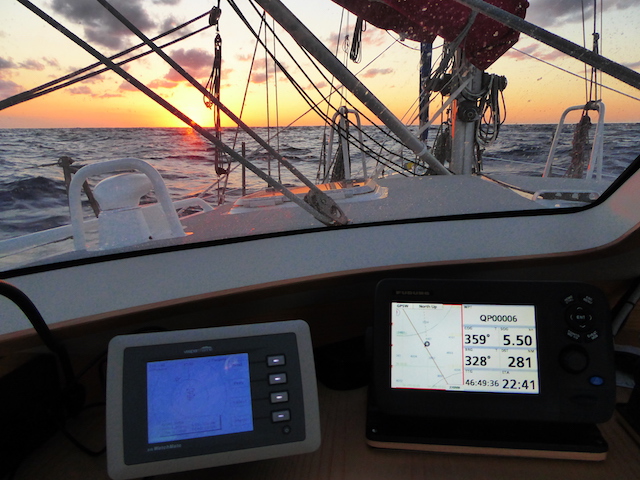 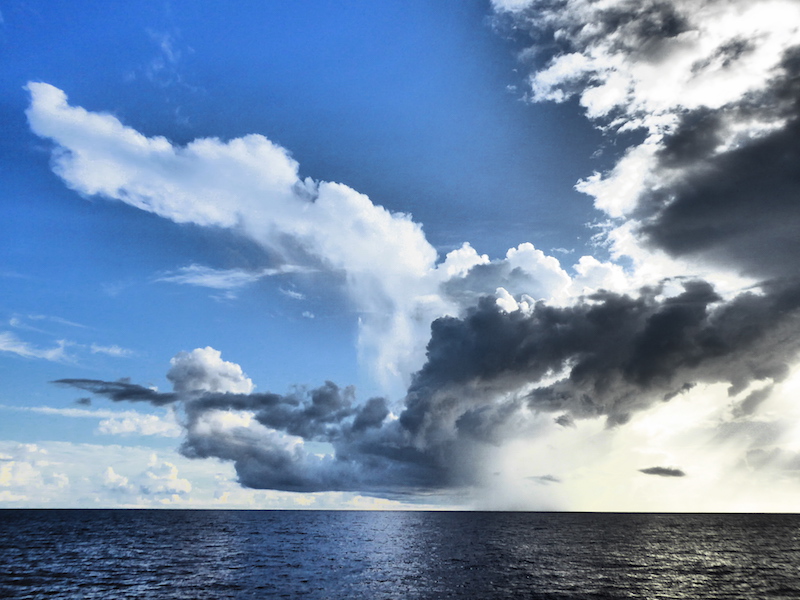 As often happens when I sail alone I wasted a lot of time taking photos of clouds. This was a squall that did not bother me 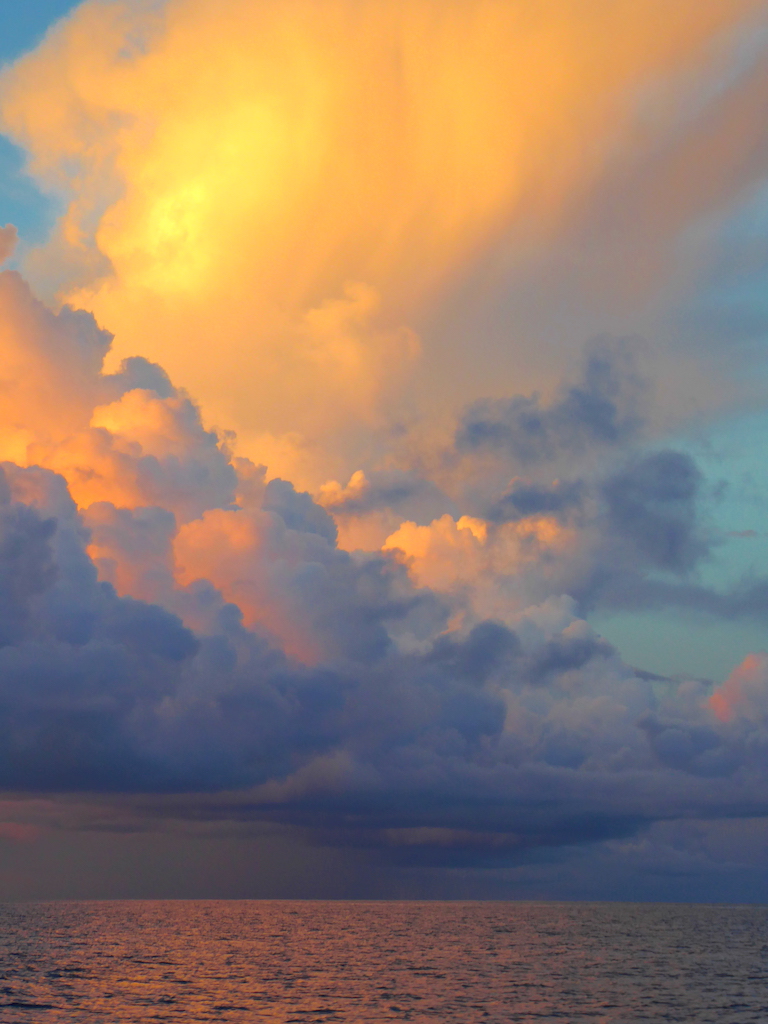 Sunset cumulus, I think with a smidge of precip underneath 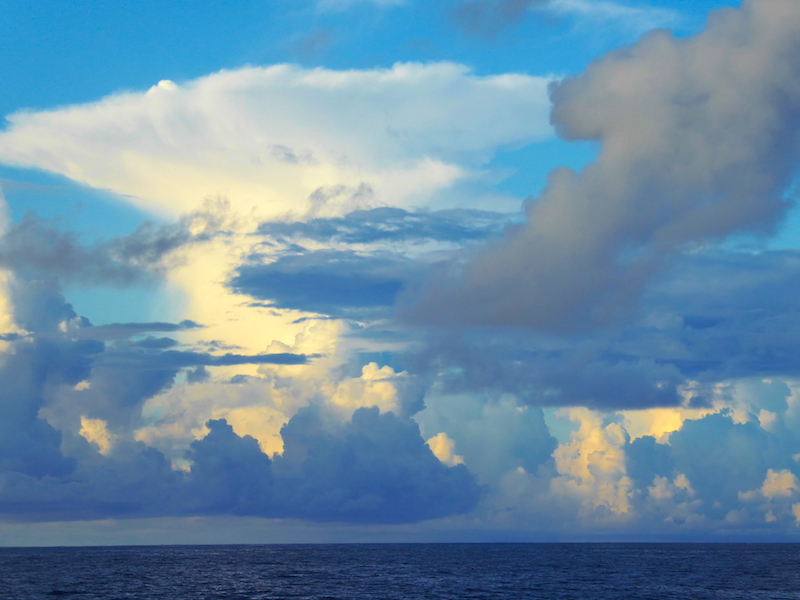 Many layers of vapor, with convection 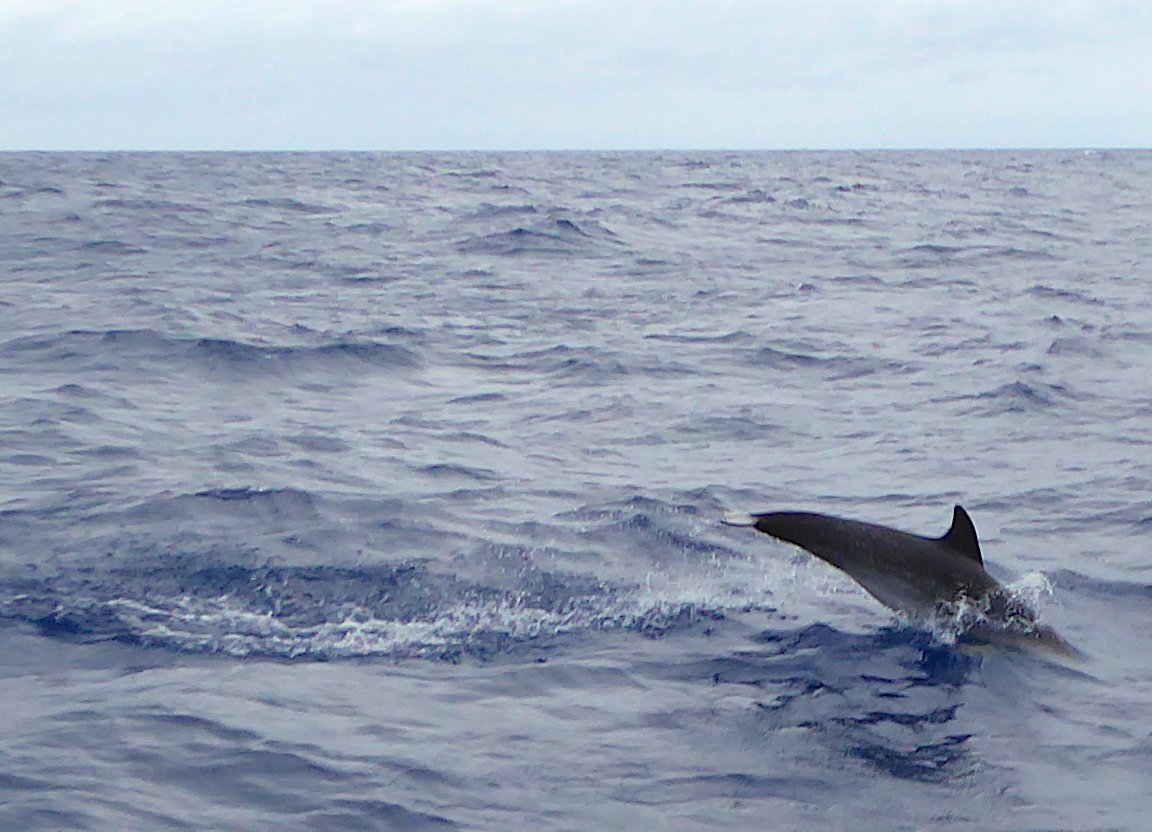 A fellow mammal, leaping. Of course one also wastes much time trying to photograph these, to no avail 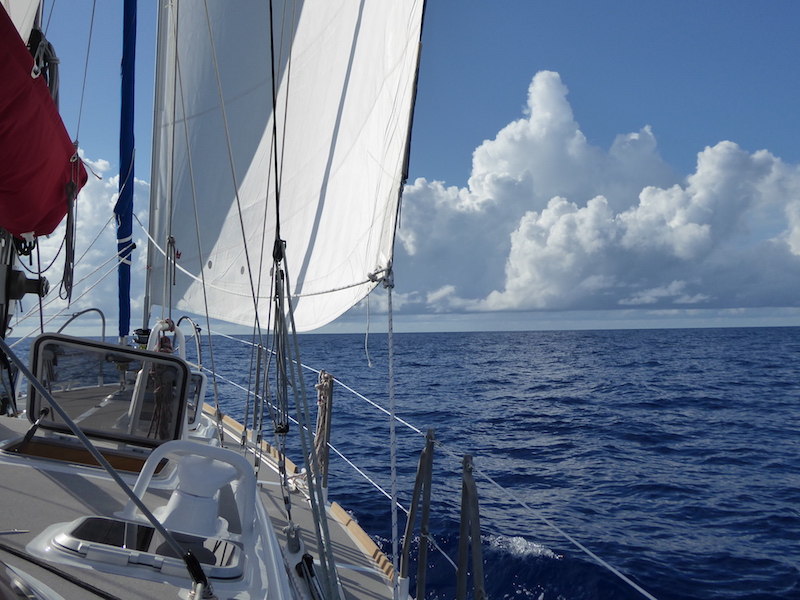 America is up ahead somewhere in there

After days of brilliant sunshine, everything went grey as I closed the coast. Grey and hazy and foggy. I landed in Newport on Saturday the 17th and the following day received wife Clare, daughter Lucy, and dog Baxter, who all drove down together from Portsmouth to wish me a happy Father’s Day.

Lucy decided to stay aboard and helped sail the boat from Newport to Portsmouth. We spent a day and a half, Sunday and part of Monday, buried in deep fog, stopping for the night first at Hadley Harbor, just south of the Cape Cod Canal, then at Provincetown, before moving on to Portsmouth on Tuesday the 20th. 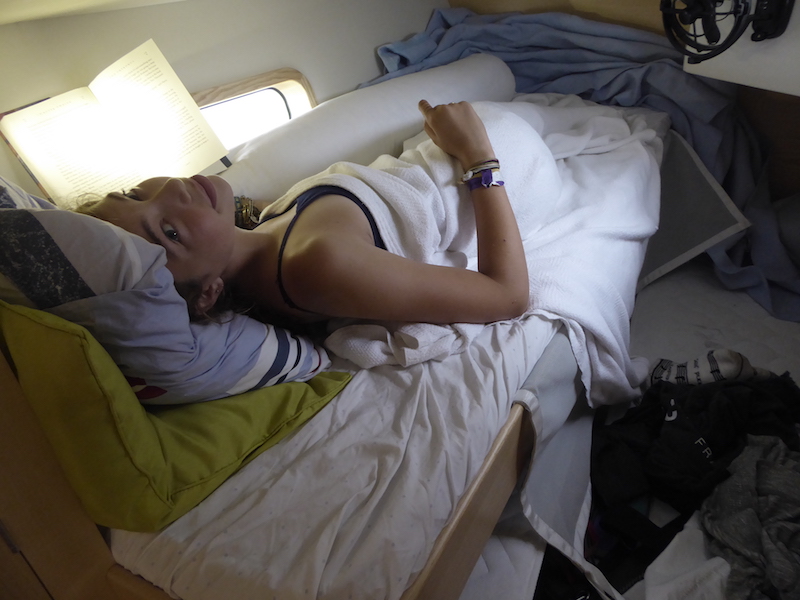 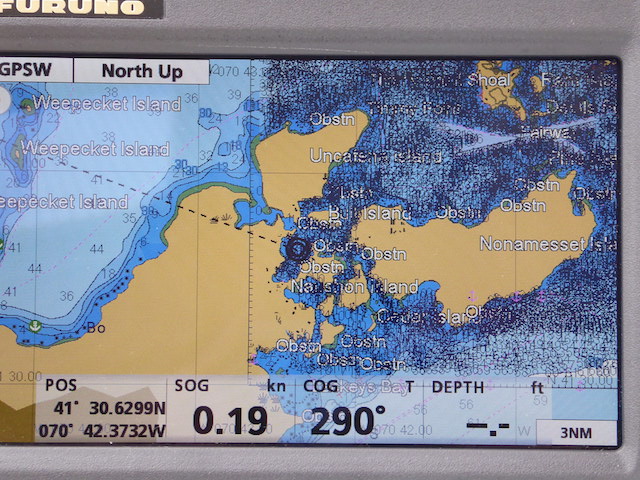 Electronic chart weirdness. My new C-Map U.S. chart running on my new Furuno GP-1670 plotter played this funny trick from Newport to the entrance of the Cape Cod Canal. Inshore waters so thick with displayed soundings at mid-zoom levels the chart is worthless. The problem disappeared (and the sun also came out) once I was north of the Cape 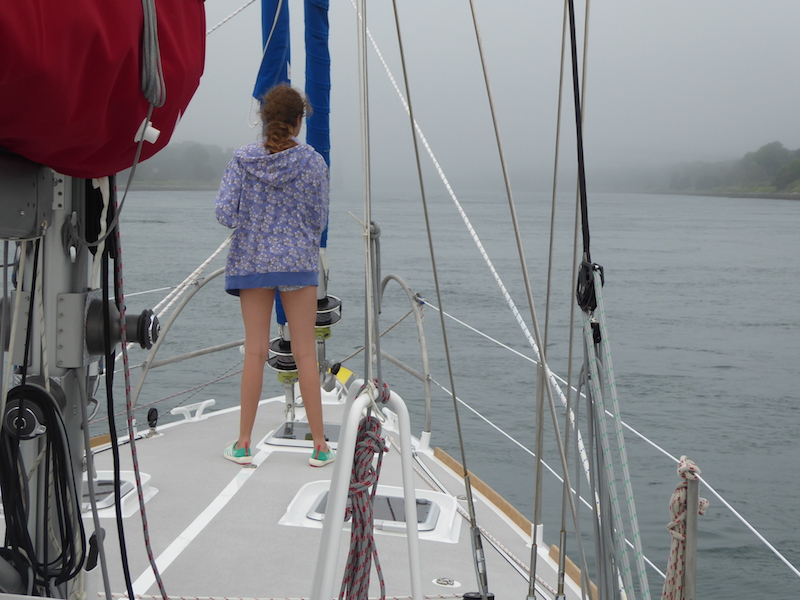 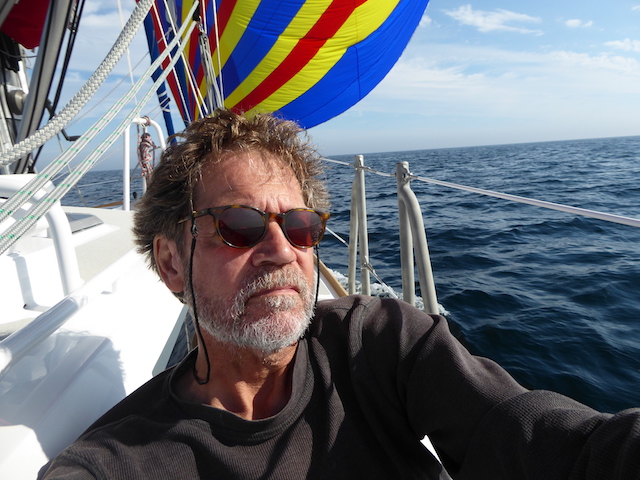 First solo spinnaker set en route from P-town to Portsmouth. Note badly needed haircut, which was administered by a nice Korean lady in a cut-rate nail salon on Thames Street in Newport 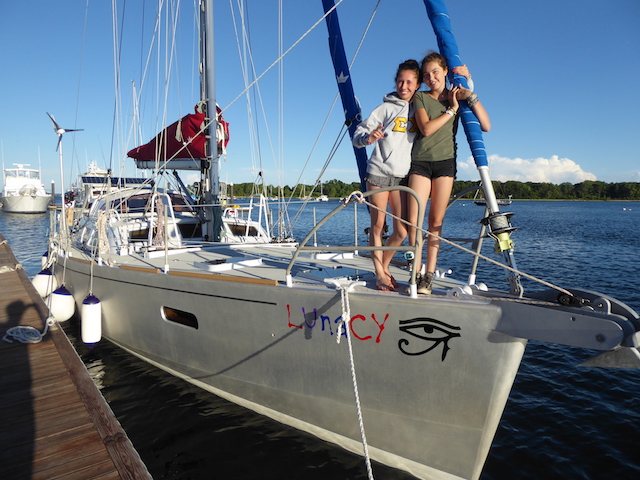 That last run, the 70 miles from P-town to the mouth of the Piscataqua River, was perfection. Sunshine. Benevolent wind.

And home again at last.