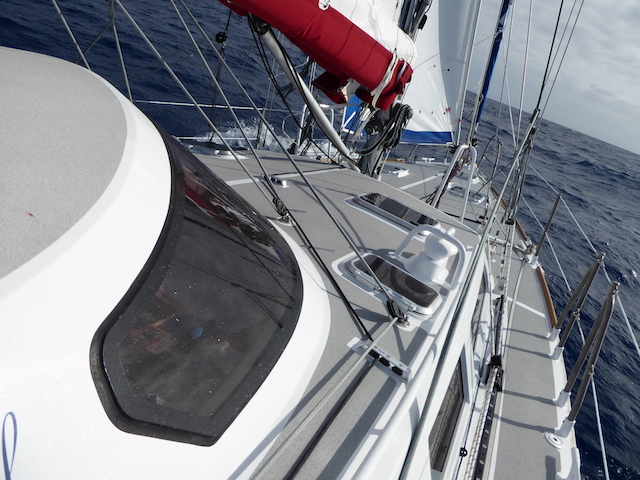 This was a hard one this. For one thing it was a bigger jump than I had sketched out in my head. For some reason I had fixated on 2000 as the rough mileage between Porto Santo and Bermuda (see last blog post), but in fact it is 2,400 and change, even via a great circle route, as the chartplotter dourly informed me once I plugged in the distant waypoint. In all, due both to contrary winds and aggravating technical problems (more on that coming up), it took us 23 days and about nine hours to transit the gap, which via the meandering route we followed involved moving much more than just 2,400 miles.

We all enjoyed our time in Porto Santo, but we were anxious to get moving again and after five days there at last found a departure window on Saturday, May 13. This had us motorsailing through a wind void to start, but with the promise of easterly wind to come. 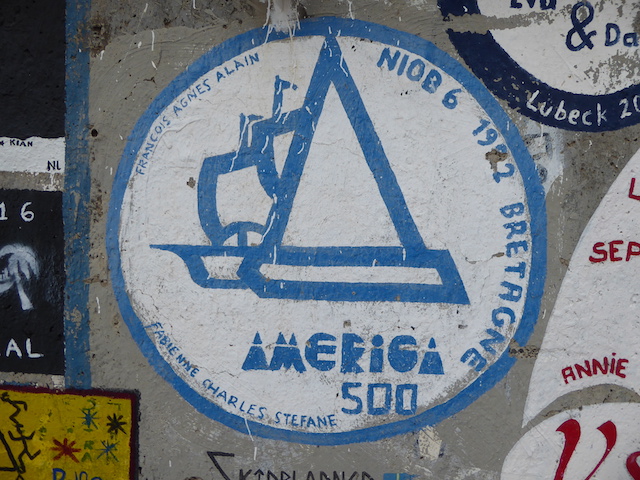 Found on the breakwater wall at Porto Santo, a boat painting dating back to the America 500 rally in 1992. I crewed around on three different boats in that rally (please buy my new book for details on that!) and was amazed this painting was still in such good shape 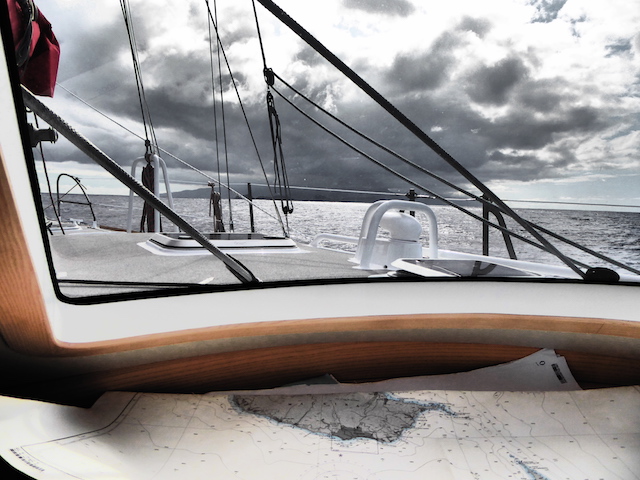 Approaching the big island of Madeira, seen from inside the doghouse here, as we motorsail west away from Porto Santo

We found reliable wind after a couple of days of intermittent motorsailing, but it did not last as long as I’d hoped. After about three days with breeze on our starboard beam and quarter it faltered again and again the engine was exercised. I agonized over this a bit (ironically, in retrospect), the fuel-management problem, as I reckoned we could cover only about 1,000 miles under power, even running the engine at a very moderate pace of 1,500-1,800 RPM.

When the wind did come back to us it was in the form of a strong frontal passage that had us sailing closehauled, first on port then later on starboard tack, for a bit more than two days in westerly apparent winds that ranged from the mid 20s to the low 30s with sustained bursts up to 40 in squalls. 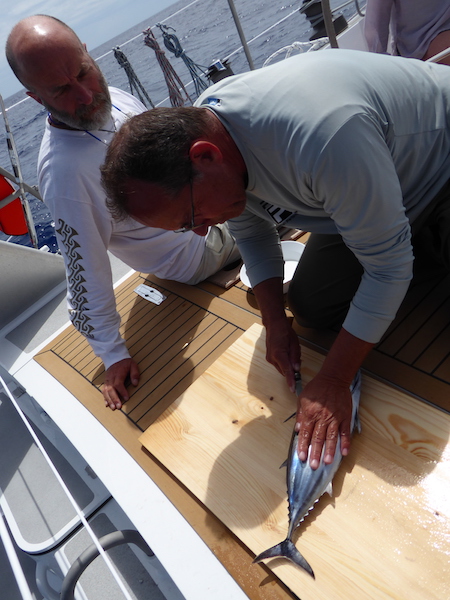 David, ever eager to learn, watches Michael clean a small albacore he caught on day 2 of the passage 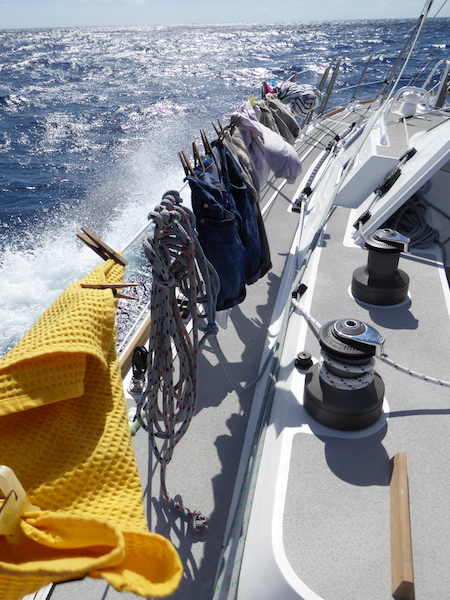 I have to say this for the Boreal 47: it handled these conditions exceptionally well. Though it was far from pleasant, the boat was as comfortable as any boat I’ve ever sailed hard on the wind in big seas like this. Very little pounding, and the motion, though pronounced, was reasonably smooth.

Our biggest problem emerged, however, after we finally cleared the squalls on the backside of the front, late on day 11 of our passage, and turned to the engine once more to help us through a lull in the breeze. We switched on the ignition and heard nothing but a big click from the relay to the starter. We did this repeatedly, of course, and both relay and starter got very warm as a result.

It is interesting how modern communications influences the unfolding of events like these when sailing offshore these days. We have a satphone onboard, and David, who is very fond of communicating, wanted to use this to call numbers for authorized Nanni engine reps found in the back of the engine manual to seek their advice. Perverse creature that I am, I thought it best to call the builder who sold me the boat and engine. They advised we should remove the starter from the engine and verify it was spinning when called upon. We did this and found it worked perfectly.

I also thought to call my good friend and fellow SAIL contributor Nigel Calder. He instantly proclaimed we must have water in the engine. This is a condition I sadly have a fair bit experience with and as soon as Nigel said this I realized I had been deluding myself and had ignored definitive evidence. When we had checked the oil, the level on the dipstick was about three inches too high, and I assured myself this was only because the boat was heeled a bit. (Insert dope-slap here.)

Nigel being Nigel knew exactly how we might solve our problem. All we had to do, he explained, was remove the engine’s valve cover, slip very skinny coins under the exhaust valve rocker arms, and press the starter button. The water would be forced from the pistons and the engine should fire. If not, he admonished, that meant our coins were too fat.

I also talked to the builder again, and they urged we should remove the injectors and turn the engine by hand to push the water out of the cylinders.

I thought about the fact that my brand new engine was under warranty and was pretty sure that warranty would be abrogated the moment I followed any advice like this. An even bigger problem: we didn’t have enough engine oil aboard for even one oil change, having squandered our supply doing break-in oil changes in both Spain and Porto Santo. The best procedure after dewatering an engine, I knew, is change the oil many times after very short running intervals. So in the end I decided it was best to leave the water where it was and just pretend we had no engine. 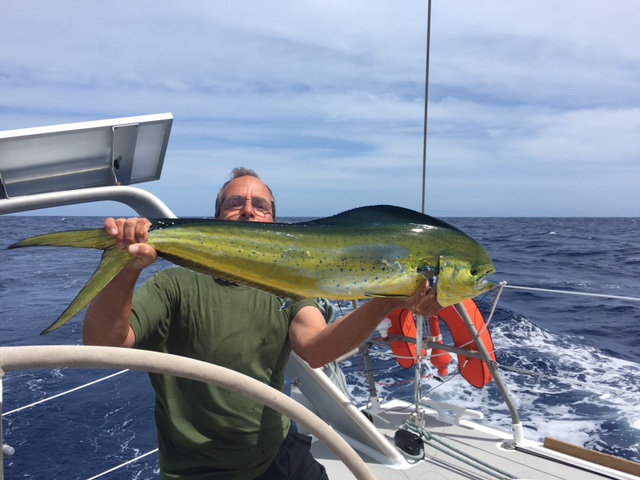 Reviewing our log now I see that most all of the time after we lost the engine, a total of 12 days, we were sailing hard on the wind. On five different occasions we were also absolutely becalmed, sails down, with no wind at all, once for as long as eight hours.

We did once get to sail on a very strong broad reach, running off before a northeast breeze ranging up to 35 knots true, for almost a day. Also, on the very last day, we had nice beam reach before a 18-20 knot southerly breeze to bring us finally to St. Georges, where we hove to off the sea buoy before being towed in by Bermuda Yacht Services just as the sun was setting on June 5. 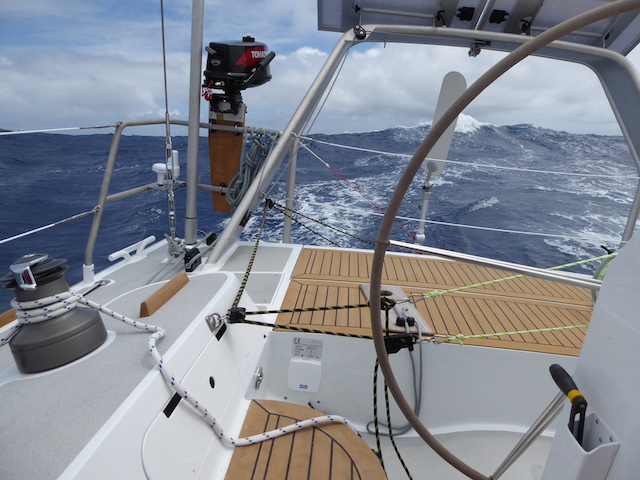 The day of the big broad reach! We were sailing under just a partially reefed genoa. We relied on the Windpilot windvane a lot after we lost the engine, to conserve power, until bolts started falling out of it 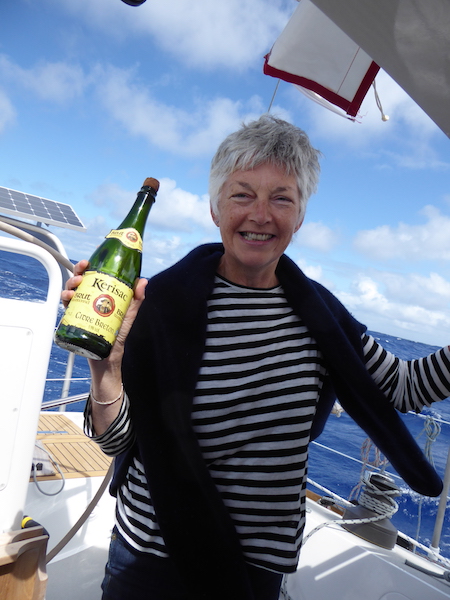 Clare prepares to chuck a bottle with a note in it overboard late in the passage. The bottle once held a fine carbonated apple cider from Brittany in France. Michael and David went to great trouble to reinsert the champagne-style cork before the bottle-with-note was launched on its journey

I should note we arrived in Bermuda with very little fresh water, low on food, but with half a tank of diesel fuel.

Oh, that we could have used it to get here sooner! 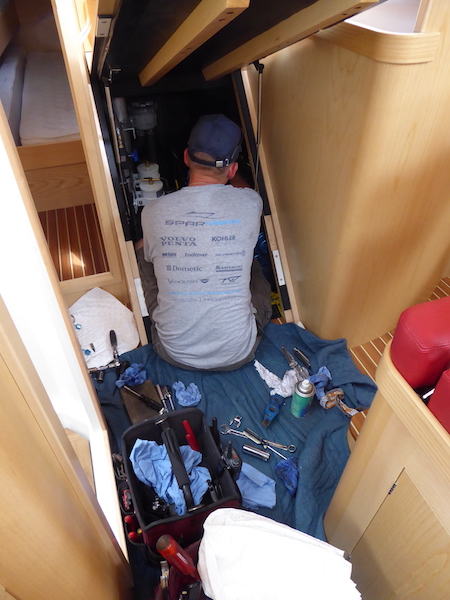 Ace mechanic Paul from Sparyard Marine dewaters the engine and analyzes the cause of our misfortune. As of this moment the engine is running perfectly (water in an engine is not nearly as bad as it sounds, believe me), but I am still waiting for a final diagnosis and proposal for a fix to prevent future events. Boreal so far has been very supportive 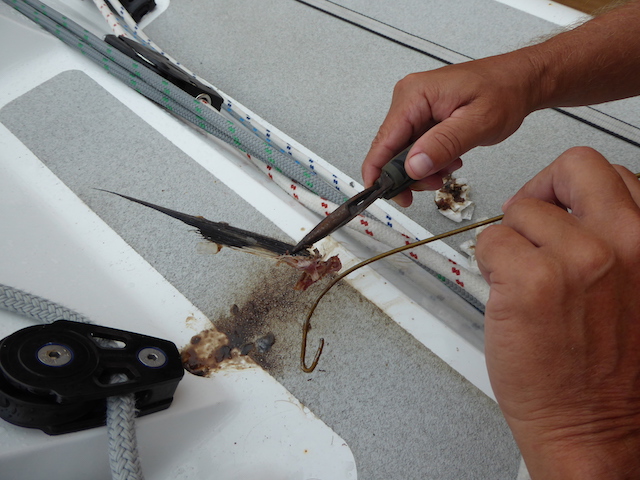 The weirdest and funniest problem we had this trip: a couple of days short of Bermuda we noticed a foul odor aboard. Only after we got here did we realize that a flying fish had jumped into the clever vent atop the doghouse that pushes fresh air into the aft cabins. It was rotting inside the baffle on the side of the doghouse and was finally extracted by Michael, who spent about an hour and a half prying it out bit by bit through a drain hole with bent wire and needlenose pliers. Ick!!! 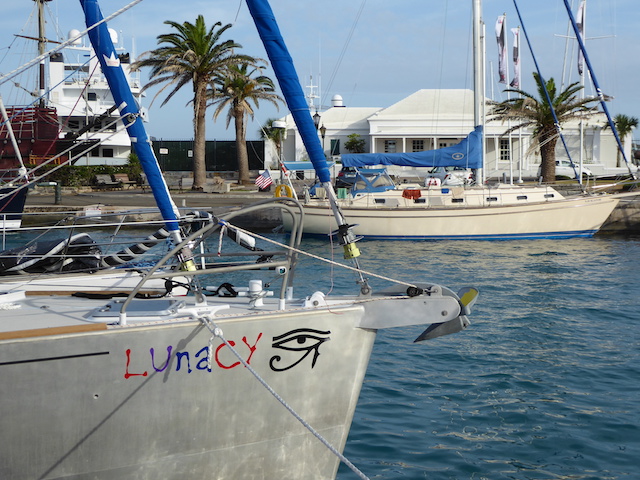 Lunacy on the wall in the cut behind Ordinance Island in St. Georges, eager to start the last leg to Newport. Many thanks, as always, are due to Sandra Soares and all my good friends at Bermuda Yachts Services, who once again have bent over backwards to help me solve problems here

One final note: you can see Lunacy’s route from France to here on our Garmin inReach ShareMap. The inReach has proved a valuable tool for receiving ongoing forecasts from the ever reliable Ken McKinley of Locus Weather. But it has also proved an enormous distraction for the crew, who have been messaging to friends far and wide while we’ve been sailing.