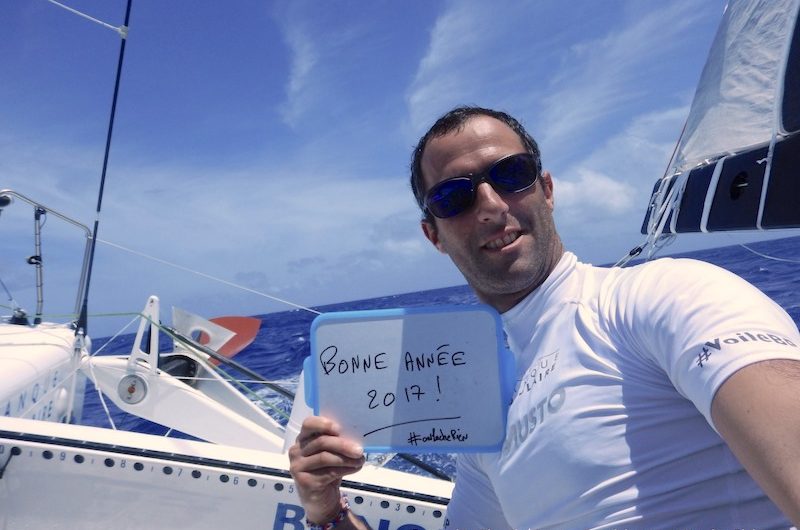 Last we discussed this the race leaders, Alex Thomson on Hugo Boss and Armel Le Cleac’h on Banque Populaire (seen above, celebrating the New Year), had just been in sight of each other as Armel passed Alex and then opened up a slim 15-mile lead. It seemed my remarking on this was a jinx for Alex, as Armel’s lead steadily increased from there, to over 800 miles, and it was starting to look like Game Over for Alex. After the duo rounded Cape Horn, however, Armel fell into light air while Alex powered on and in a matter of days that lead magically evaporated. At one point it shrank to about 20 miles(!) and as of today Alex is only about 130 miles behind, still with a serious shot of winning this thing as the duo, who are both now in the North Atlantic again, pick their way through a complex weather system to the finish line in Les Sables d’Olonne.

But wait! We also can’t entirely rule out the third-place skipper, Jérémie Beyou on Maître CoQ, who has been staging his own Furious Comeback since rounding the Horn and has whittled a deficit of well over 1,000 miles to 650… and shrinking… by the hour… maintaining speeds of around 12 knots as I write, while Armel and Alex diddle around at sub-5-knots speeds in the Doldrums.

As Yogi Berra would say: It ain’t over, etc. 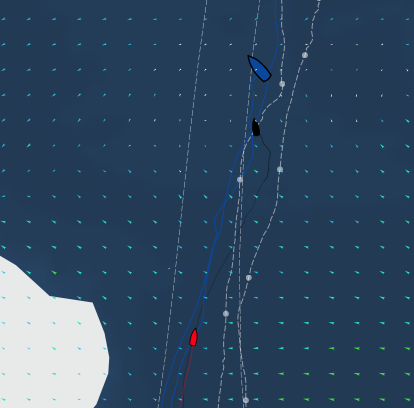 Relative positions of the first three boats as of this morning, with wind vectors 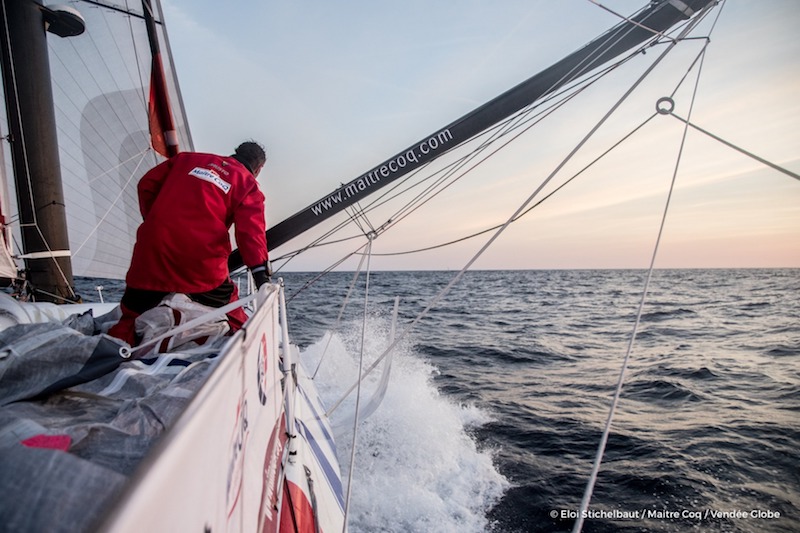 What is interesting about all this is that each of these three boats carries different species of the three different types of J-foils that have famously debuted in this edition of the Vendée Globe. Banque Pop carries the most common type, developed by VPLP/Verdier for five of the new foiling boats (though there are slight variations between them). Hugo Boss carries a much more horizontal variation, developed in-house by Alex Thomson Racing, with a wider spread than the others and the only foils long enough to come up above deck level when retracted. Maître CoQ meanwhile carries the only retrofitted foils, designed by Nick Holroyd, that were grafted on to an older, lighter boat, and these feature a unique vertical fin that descends below the elbow of the main foil. 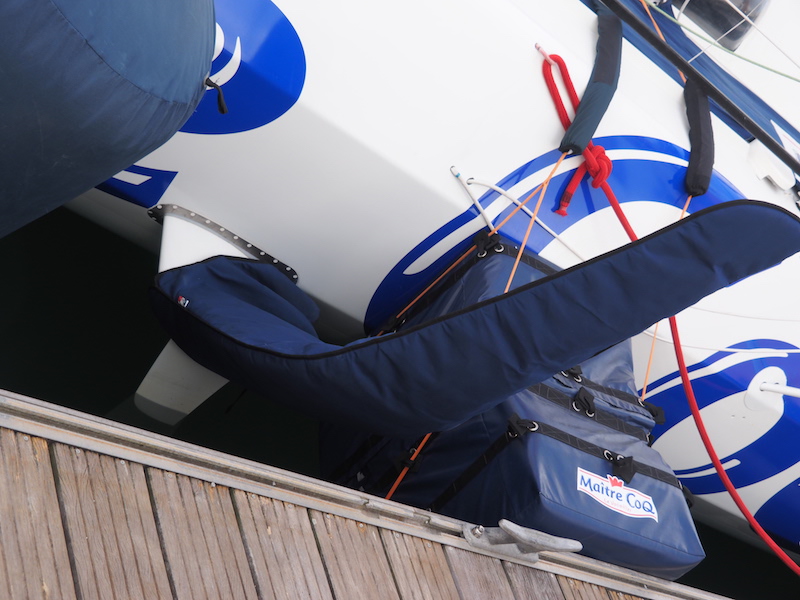 Finned foil on Maître CoQ at the dock in Les Sables. She is lighter than the new boats, as she predates new IMOCA rules dictating heavier one-design keels and rigs

The most powerful foils are probably those on Hugo Boss, which has so far turned in the fastest 24-hour run of the race (and came within a few meters of winning the world record in the solo monohull 24-hour-run department). At least they were the most powerful, until the boat’s starboard foil broke off in a collision early in the race. Hugo Boss’s foils must create more righting moment when deployed and are also believed to generate lift in lighter conditions and at slower speeds than the other two types. Which may be why Alex has been able to stay in the hunt despite losing one foil… or maybe it’s all the Worcestershire sauce he puts in his freeze-dried food.

(See this video, in which he describes his diet:)

What’s working in Alex’s favor in this last stretch of the race up the North Atlantic back to France is that he should be able to stay on starboard tack much of the time with his intact port-side foil working to help him along.

On Maître CoQ, meanwhile, we see a foil I believe must work better to windward, thanks to that vertical fin. It is one of the weaknesses of the new foils on these IMOCA 60s, that they don’t combat leeway that well, and if Maître CoQ’s foils are the best of the lot in this regard, it may give Jérémie a distinct advantage, as there may be a lot of windward work to come in the race up the North Atlantic.

Of course, the big advantage Armel has is that he’s in the lead, on an undamaged boat, and is one of the very best skippers in the race.

We shall see. I am pondering all this deeply and will share much more on the development of these boats and foiling monohulls generally in the April issue of SAIL. Be sure to catch it.

Meanwhile, I’m checking the VG race tracker about 10 times a day. I reckon we have about 10 days to go until we know the outcome.

PS: In the April issue of SAIL you should also find an excerpt from the new book: 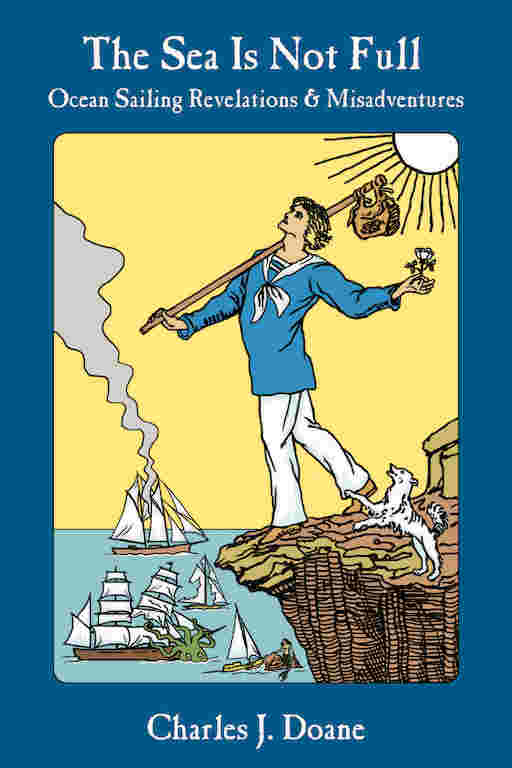 Be sure to catch that too. And the whole damn book when it comes out!