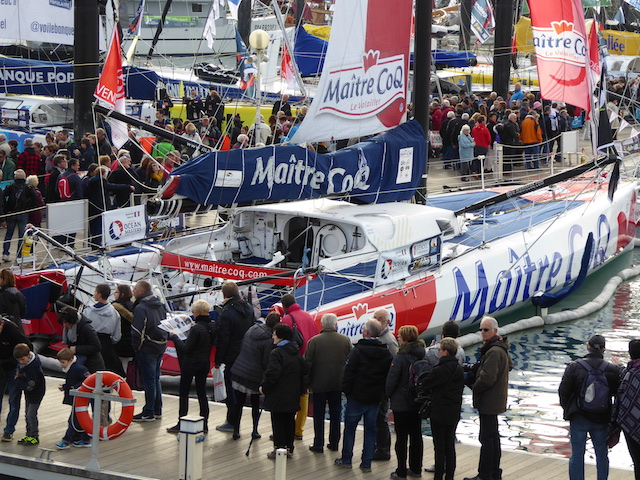 About 16 years ago I wrote a story for SAIL Magazine about sailing in the Sydney-Hobart Race and dropped a line about having died and gone to heaven, as at last I’d found a place where ocean sailing was considered a top-tier sport. Well, this week it’s like I’ve died all over again and heaven is even grander than before. It’s also very French. Before I left to travel here to Les Sables d’Olonne I told some non-sailing friends of mine I was going to the start of the world’s most popular sailboat race. “Like the America’s Cup?” they asked. “No, this is much bigger than that,” I answered. And it is, and it’s a shame the French get it mostly to themselves.

I hope I don’t really have to explain this to anyone who reads this blog, but just in case: these guys are racing non-stop around the world all alone. It’s a very simple concept, but also a very large one.

I arrived here yesterday with Brian Harris, who helped prep Rich Wilson’s Great American IV at Maine Yacht Center and used to work full-time in this game prepping boats for the likes of Josh Hall and Alex Thomson. We were repelled by mobs at three different race-village entrances before we finally got hold of some credentials and made our way to the dock. Since then I’ve wandering around in a daze. 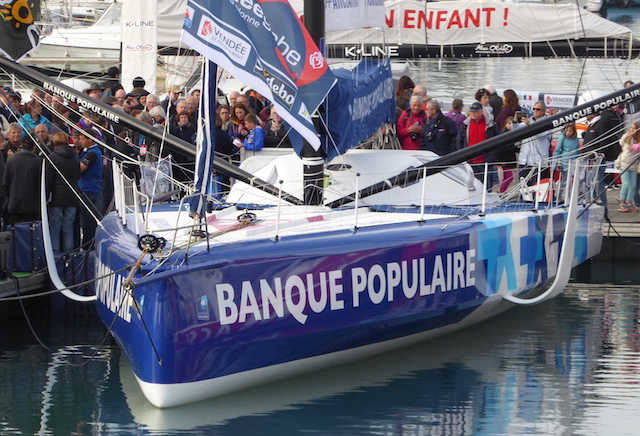 Banque Pop shows off her J-foils (some call them “Dali” foils after the funny moustache worn by the eccentric Spanish artist). Seven of the 29 boats in the race are sporting this latest innovation in Open 60 design. When extended they lift the hull upwards, effectively reducing the boat’s weight while sailing, and also provide lift to windward, like a conventional keel or daggerboard. A fascinating concept, but they sure look vulnerable to me 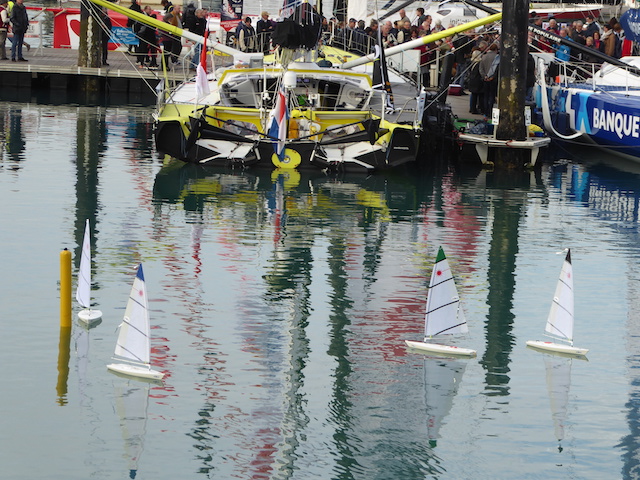 Model boats race while the big boys get ready to fly 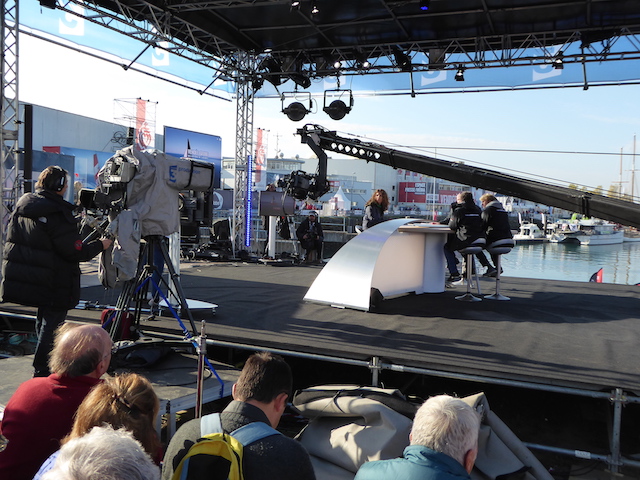 Making a TV show in the middle of everything 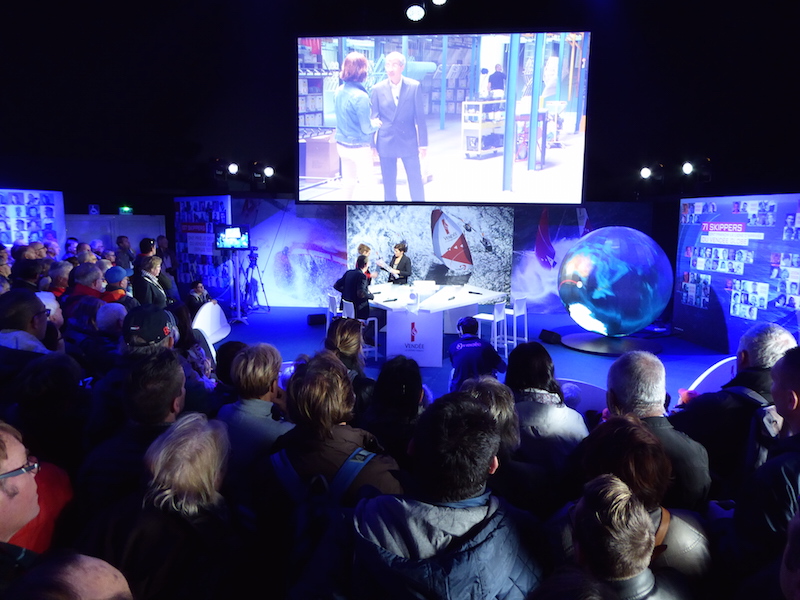 An even bigger TV show, produced indoors before a rapt audience 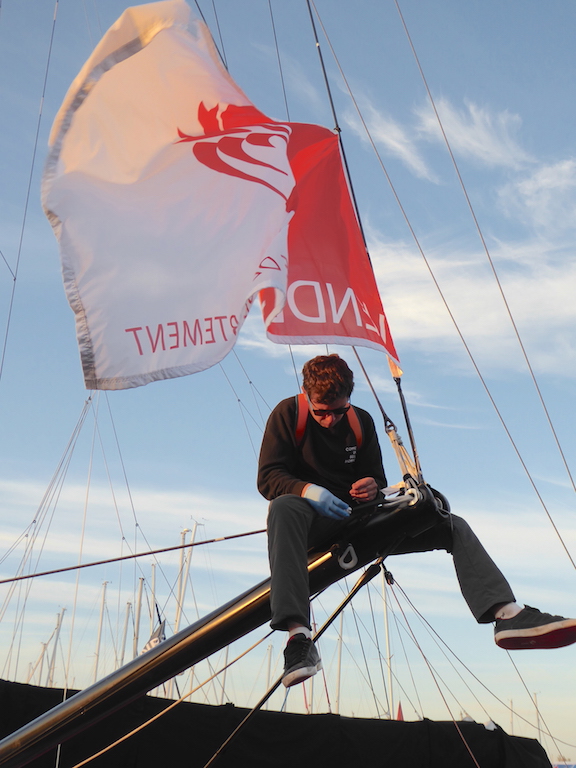 Working on the end of a deck spreader 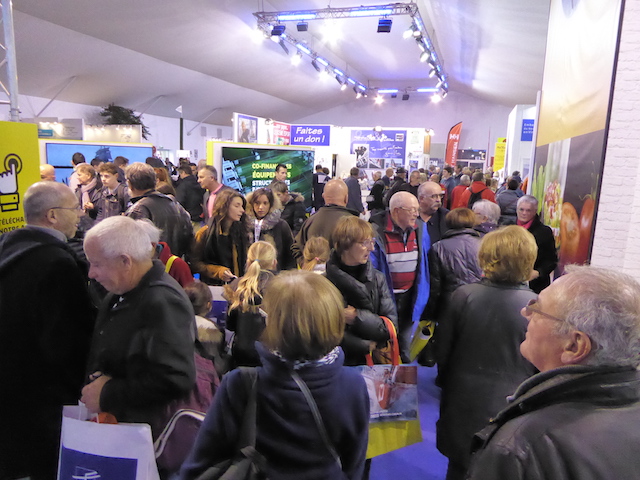 A big crowd inside the sponsor’s pavilion. Companies backing these boats get some real bang for their buck 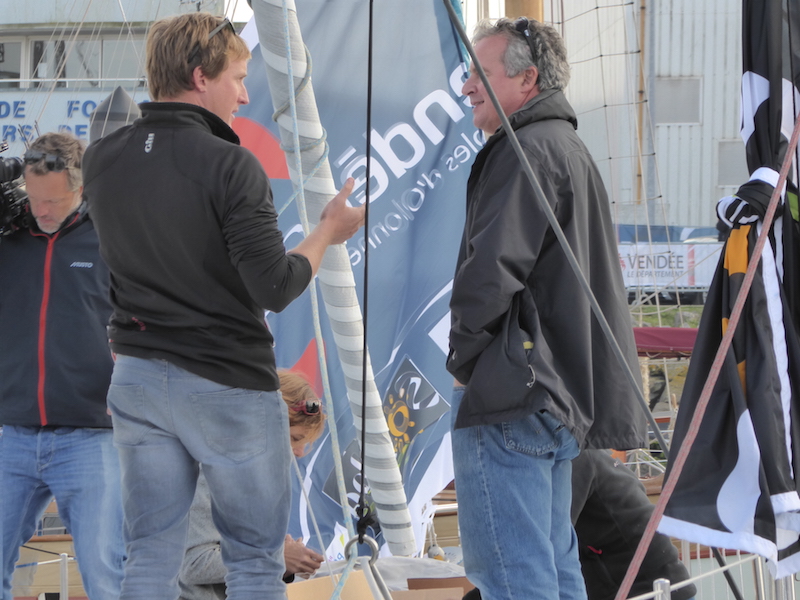 For this edition there are one and a half Americans in the fleet. The half one is Conrad Colman (on the left), a dual Kiwi/American citizen who moved to France to get a chance to do this race. He’s sailing 100% Natural Energy, a fossil-fuel-free boat that carries an electric motor instead of an engine, which will leave him entirely dependent on alternative energy sources during the race 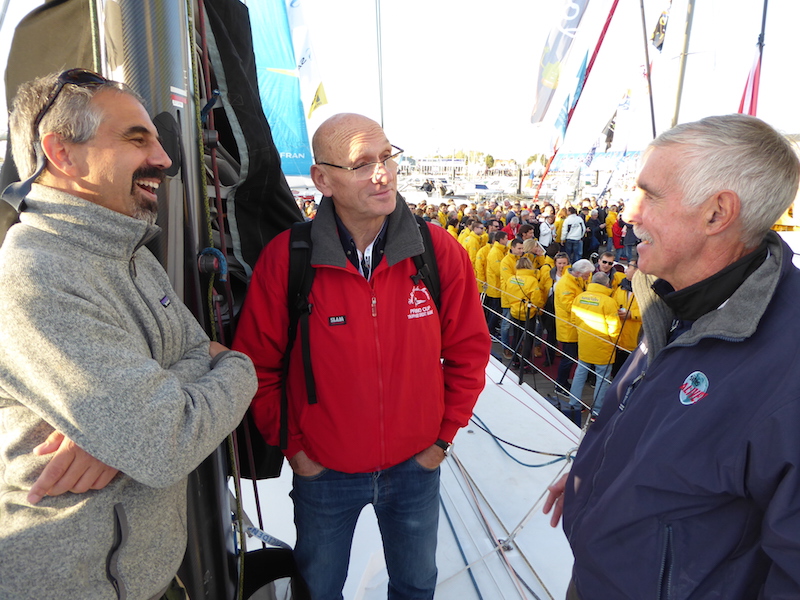 The whole American, of course, is Rich Wilson (on the right), who at 66 is also the oldest competitor ever to start the race. But he is not feeling lonely. There are three other guys over 60 in the race. That’s Brian Harris on the left, and the guy in the middle is a former Vendee Globe race director (unfortunately I can’t come up with his name right now), who ran the very first race, plus three others 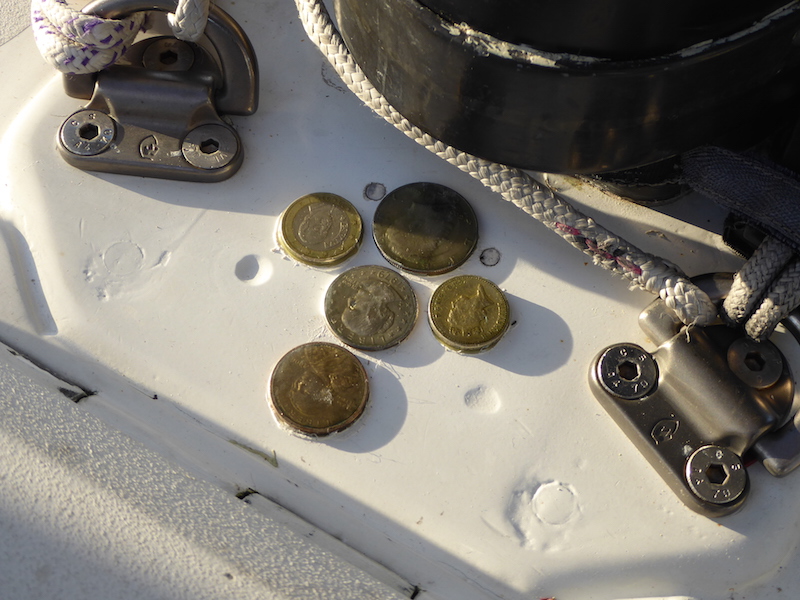 For good luck Rich pasted some coins to his deck with Sikaflex just in front of his mast. These are three American dollar coins (Sacagawea, Susan B. Anthony, and JFK), plus a British pound and a euro 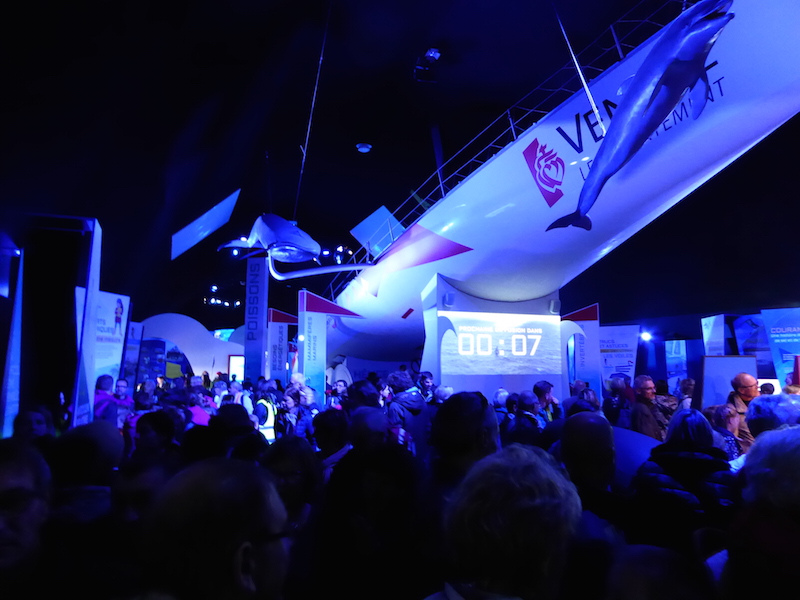 A huge crowd inside the race pavilion 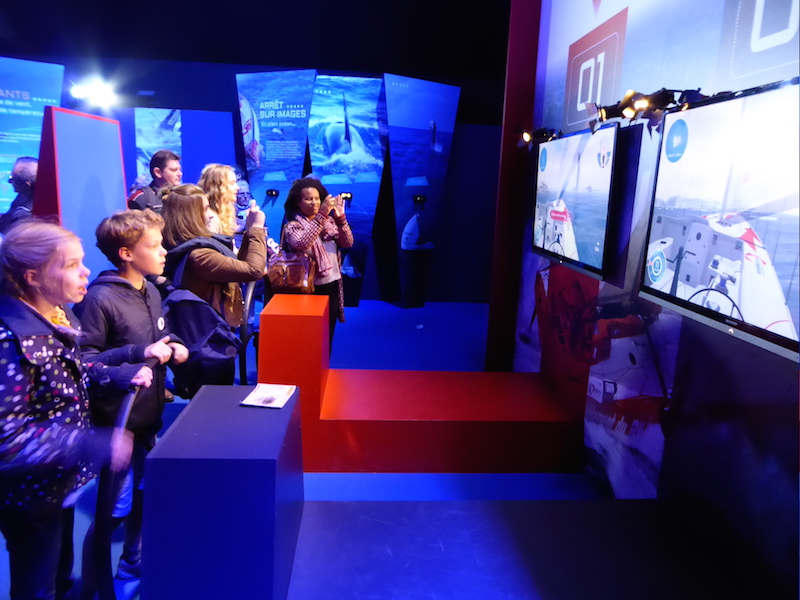 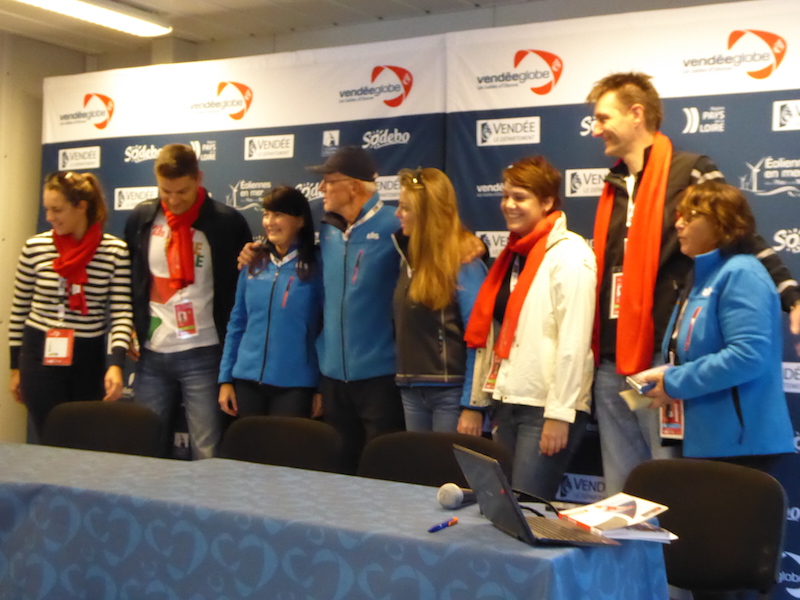 Nandor Fa (center) poses with his Spirit of Hungary team. (They handed out special chocolate bars at a press event today.) He’s another member of the over-60 crowd and is starting his third race here 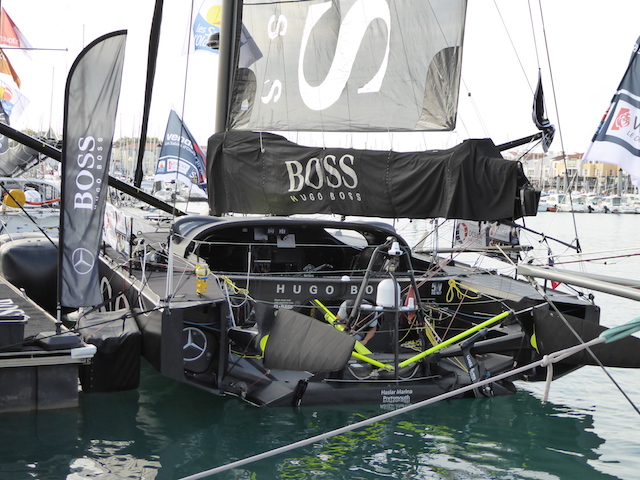 Alex Thomson’s Hugo Boss is certainly the deadliest looking boat in the fleet and has attracted huge crowds. She’s fendered well off the dock, because she too carries J foils 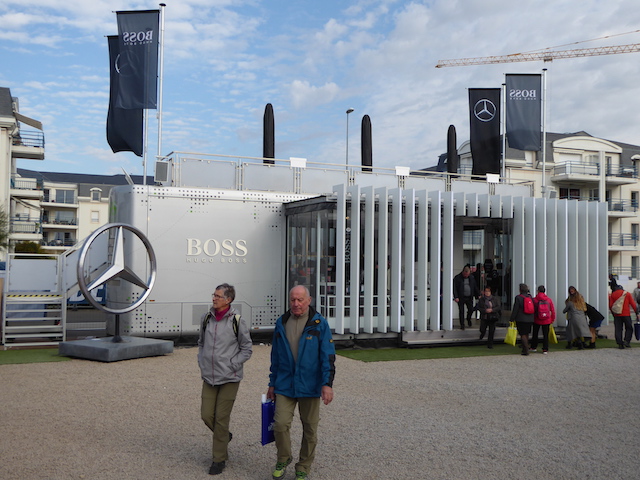 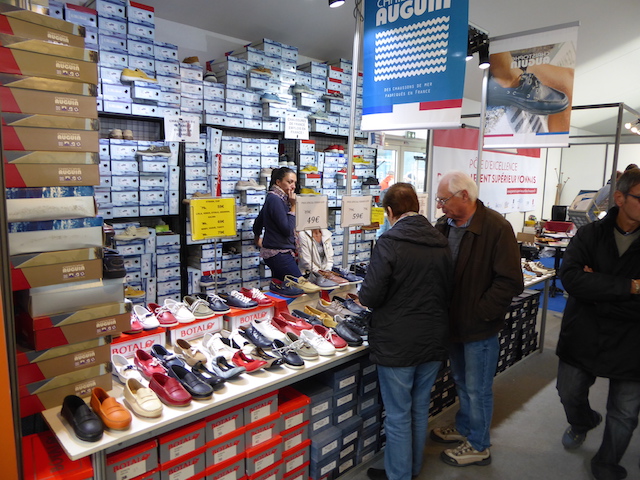 Plus there’s a whole shopping mall with lesser retail options 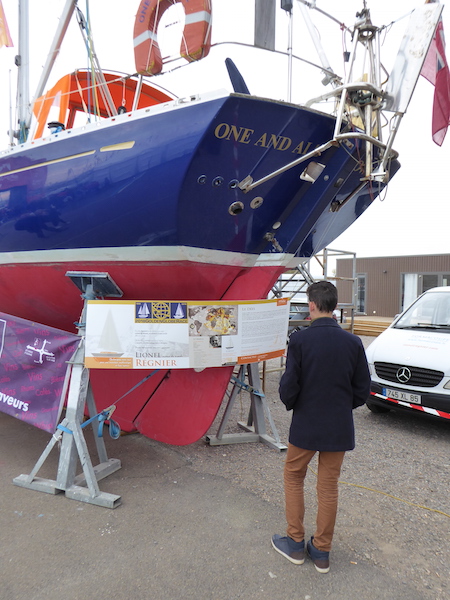 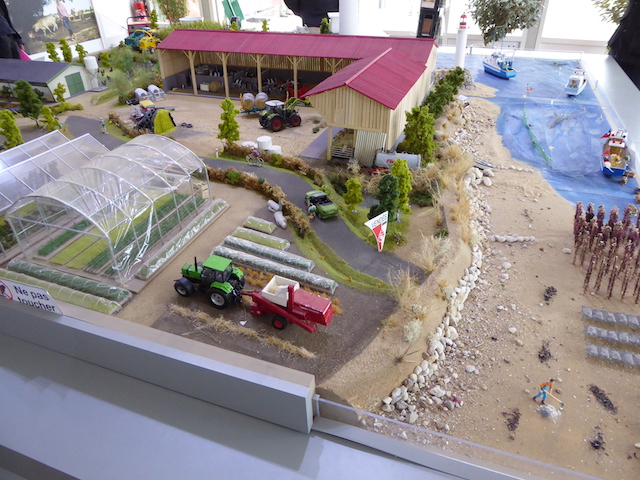 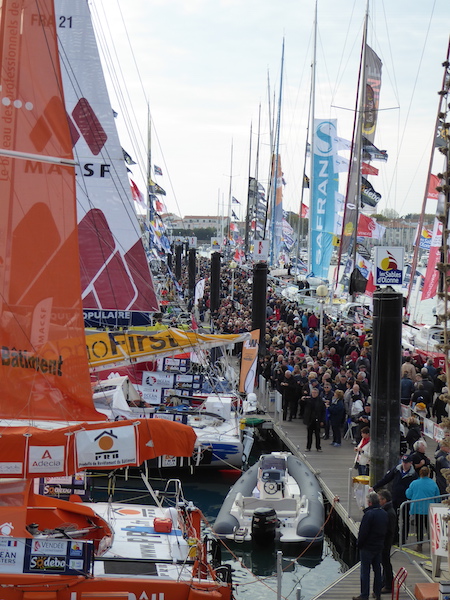 And the mob strolls on. Tomorrow the hordes shall be banished from the dock, with limited access for the press, so hopefully I’ll have a chance to inspect the boats in more detail