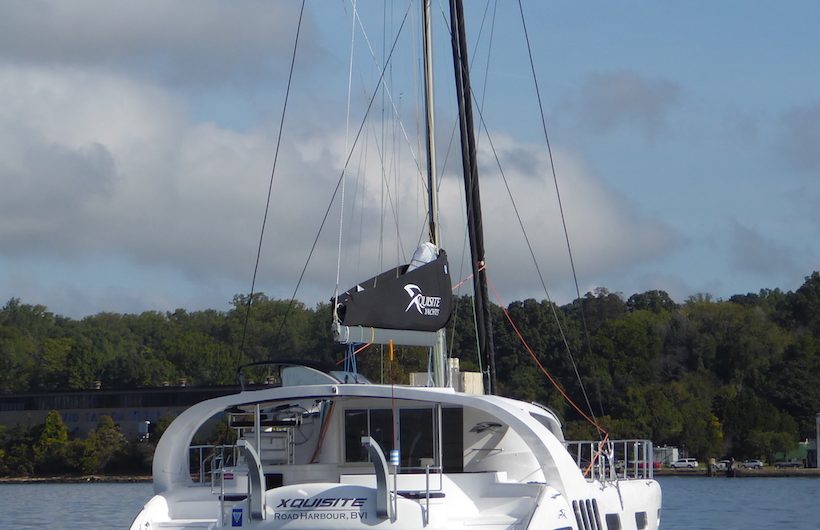 Day two of my test-sailing regimen on Chesapeake Bay earlier this month involved just two boats, both a good deal larger (50-footers) than the three I sailed on day one. The wind forecast, lamentably, was for even lighter conditions overall than the day before. This worried me a bit, particularly with respect to my first ride, the impressive X5 cruising catamaran on which I bloviated at some length in my post on the Annapolis show. We approached her via water taxi in the morning as she lay at anchor off the Naval Academy (see image up top), and I noted with dismay the mostly unruffled water on which she floated.

I will not mince words here. This is a fat cruising cat, a “condo cat” some would call her, pitched much more toward liveaboard comfort than performance. In that image there you’ll note she has exaggerated hindquarters, with a lot of superstructure (including the alarming arch) on her bridgedeck, with reasonable but not great vertical clearance beneath it. She of course also has low-aspect keels instead of high-aspect boards, and though not obese is significantly heavier than a straight-up performance cat. In real life when you’re sailing on a boat like this and the true wind drops below 12 knots, you fire up one or more engines and start motoring straight to where you want to go. Except this wasn’t real life. We had to try sailing the boat, in a true wind of around 5-6 knots, even if it meant drifting brick-like about the bay. 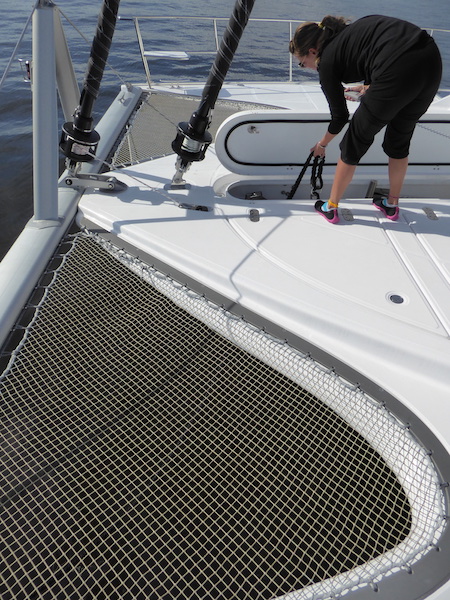 Sara raises the anchor. There’s a lot of solid structure forward of the mast and not much net, which is never an indicator of great sailing performance in a catamaran. The anchoring kit, however, is well thought out, as are so many practical things on this boat. You can manage all the tackle, including the mooring bridle, from this one position without hanging off the front of the boat. Plus there’s room to sling a secondary anchor if you need it 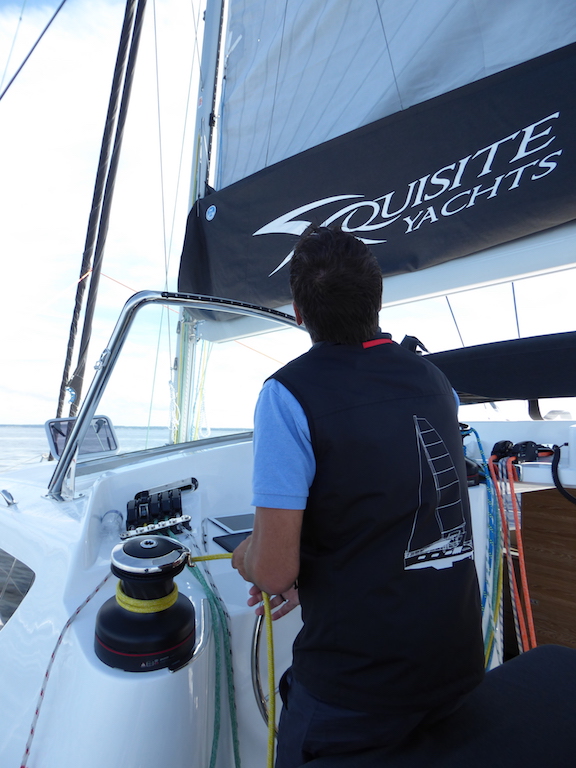 Tamas raises the mainsail. The helm station is well thought out. All lines come to the helm and are managed by electric winches controlled with foot switches, so both your hands are always free to manage lines even while winch drums are turning. Here the fabulous helm bimini top (mentioned in my previous post) has been quickly pushed out of the way so Tamas can see the sail clearly. All working sails are sexy North Norlam cruising laminate sails, which come standard with the boat 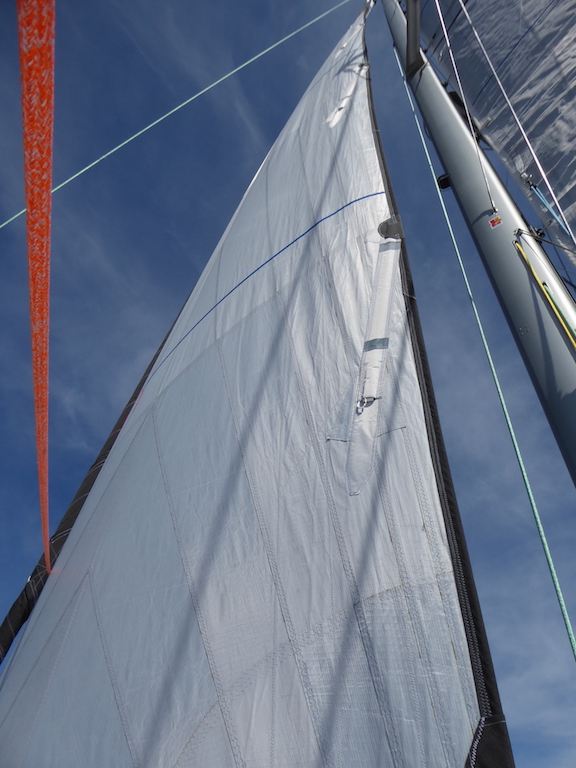 First we tried sailing upwind under the full main (a nice big square-topped one with 1,076 sq.ft. of area) and this self-tacking blade jib. The jib set great, without its top opening up too much, as is common with these sorts of sails, thanks to those vertical battens you see in the leech. These furl up nicely with the sail no problem. With its curved track the sail also shifted easily back and forth when tacking in light conditions without sticking, another common problem with these sails. In what developed to 7 knots of apparent wind, our closehauled upwind speed under this set was 2.8 knots at a 45-degree AWA. (Tamas claims she can climb to 35 degrees in stronger wind.) Later we tried the much larger screecher. This got us up to 3.8 knots at a 55-degree angle. (Tamas claims the screecher can point to 45 degrees in stronger wind.) Our fastest speed, 5.2 knots, was under the main and screecher at a 65-degree AWA. None of these are speeds that will inspire you to not run engines in conditions like this, but they were better than I expected. The most impressive thing for a boat of this size and type was how easily it tacked through the light wind under its working jib–no hint of stalling, with very little loss of speed 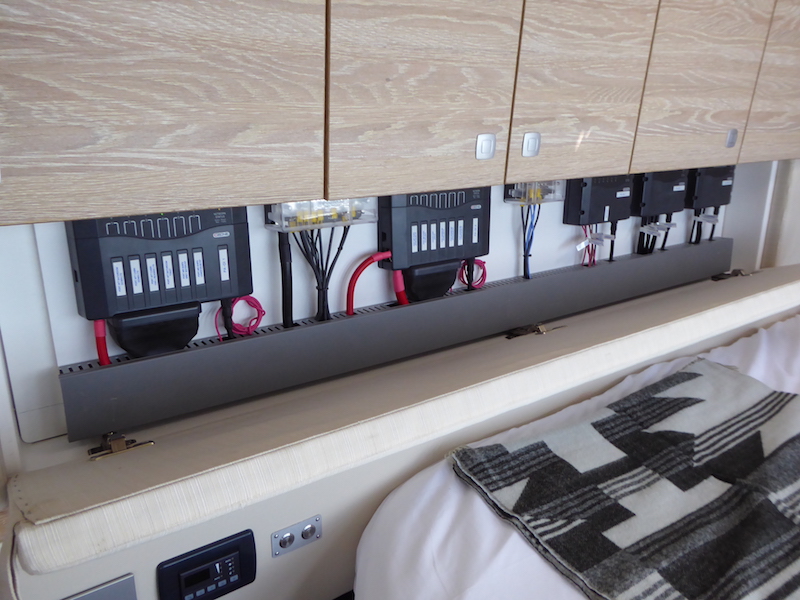 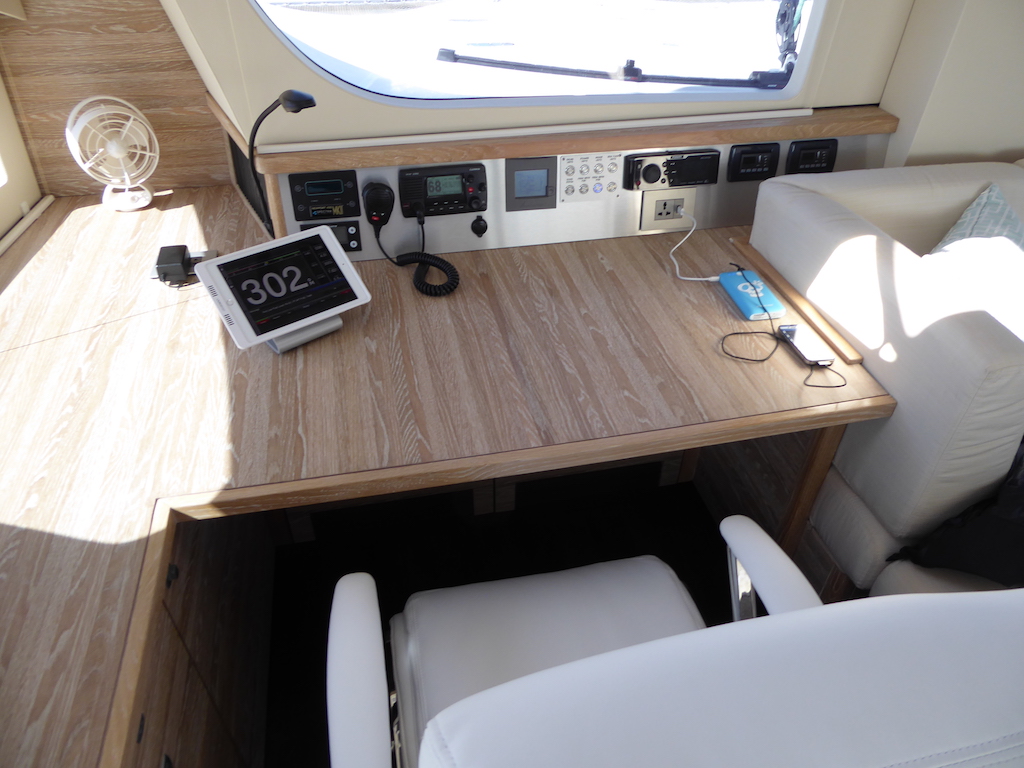 And some more shots of the nav station, featuring the boat’s iPad brain (on the left), which is used to control and monitor systems and also, as seen in this image, navigation, with our compass course on display

My next ride, the sleek Solaris 50 from Italy, came late in the afternoon and promised to be a bit sprightlier in the still calm conditions. 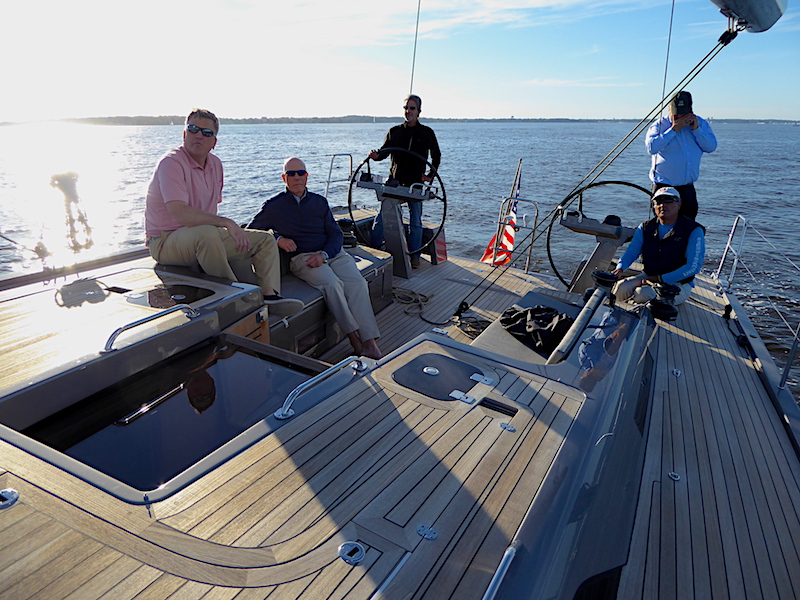 Interested parties. Who wouldn’t want to go sailing on a boat as swank as this??? 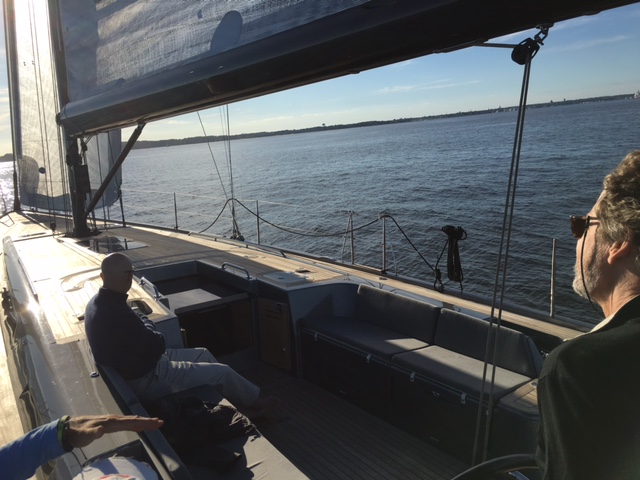 That’s me steering the Solaris upwind under full main and the small self-tacking jib. This proved an excellent illustration of what a true performance-oriented boat can do in light air. We had the same true wind I’d seen during my X5 test, 5-6 knots, yet because the Solaris was inherently faster, our upwind apparent wind speed rose to 10 knots (instead of just 7) and our boat speed, at a 32-degree AWA, matched the true wind speed of 6 knots. Cracking off to 45 degrees, it rose to 6.3 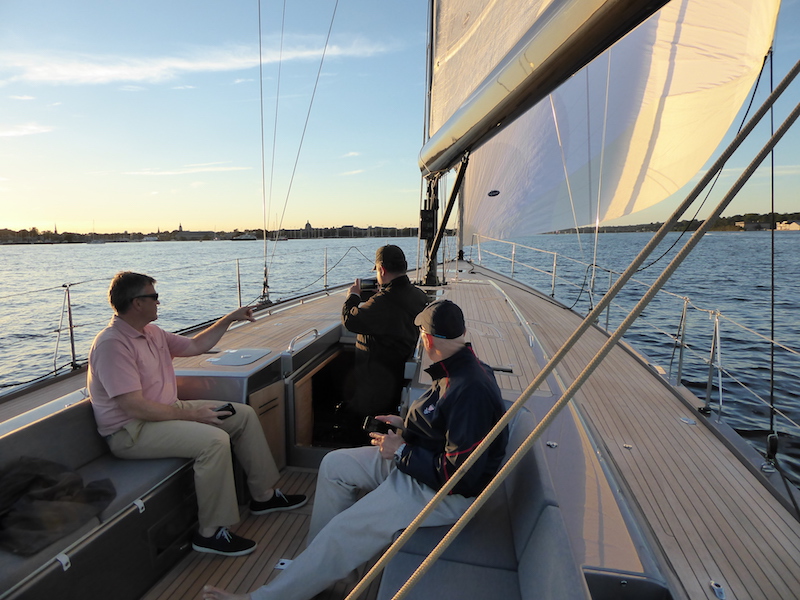 Later we broke out the Code Zero sail (or a screecher, if we were on a cat), flown from the bow on a removable continuous-line furler, and cracked off even more. We made 6.2 knots at a 70-degree AWA (now in 7 knots of apparent wind) and 3.4 knots at 100 degrees (in 3.4 knots of apparent wind). Numbers like this are much more likely to keep your hand away from an engine’s ignition switch 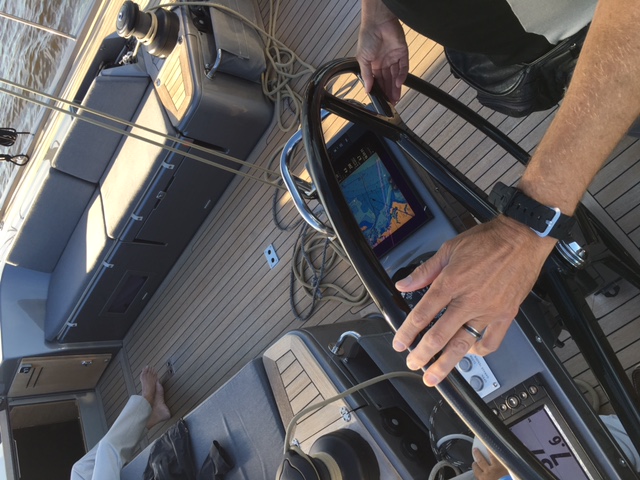 Helm feel on the Solaris, even in light air, is positively sumptuous. The deep high-aspect spade rudder controls the boat perfectly and exhibited no lee helm 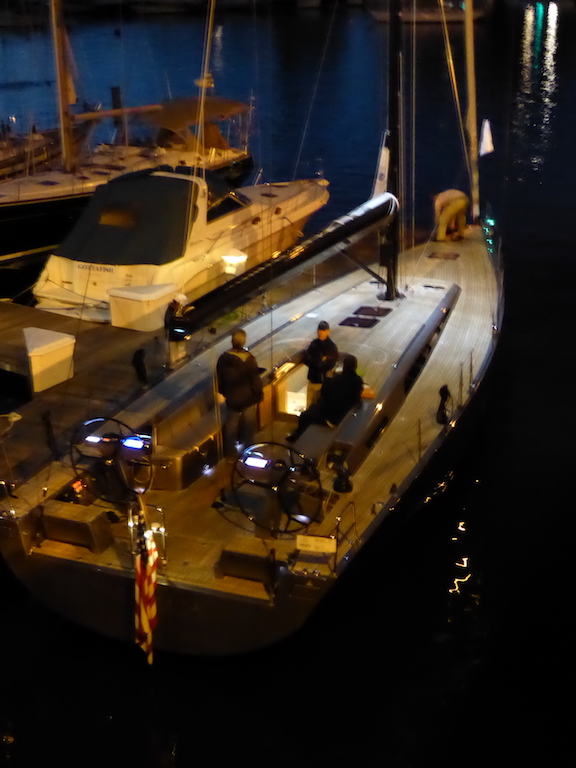 The sun was down by the time we got the Solaris back in her berth at the Annapolis Yacht Club. As you can see, she’s got a lot of style. Also a carbon rig with a carbon furling boom. Very chic!

Look for full reviews of both these boats in an upcoming issue of SAIL Magazine.