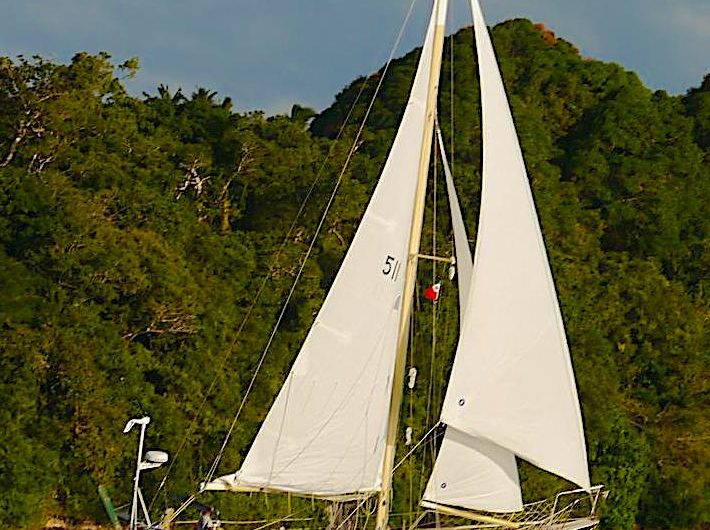 The relevant thread at Cruisers Forum is titled Abandoned Westsail 32 Free For Taking, and it’s not just a salvage hyperbole. The gent who abandoned the boat, Galena (seen above), less than 200 miles northwest of Fiji, has declared he will make no claim on it if it is recovered. He just wants someone to get it. Which shouldn’t be too hard, as its position when abandoned is known, wasn’t too far from shore, and its AIS transceiver, as of three days ago, was still transmitting.

The gent in question is one Bill Shaw, now recovering from his awful medical ordeal in a U.S. hospital. 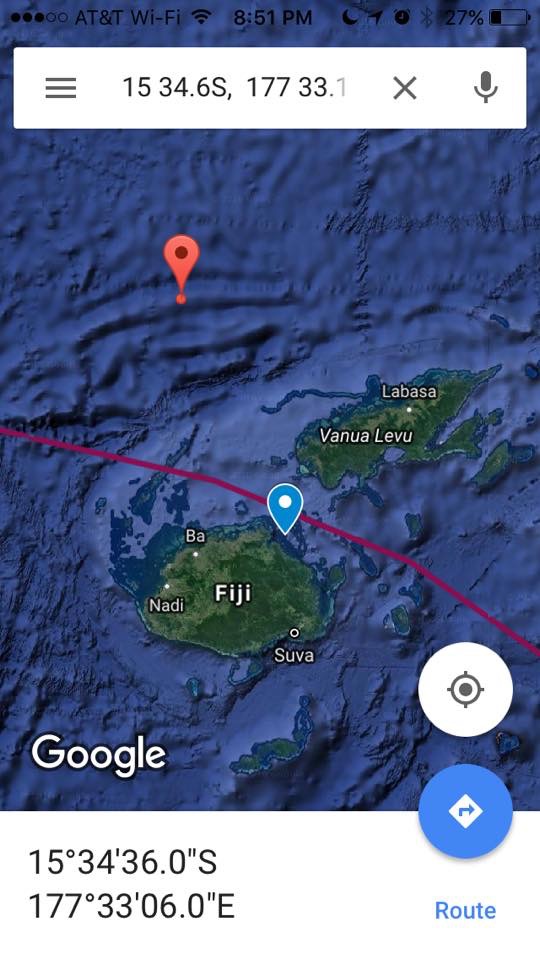 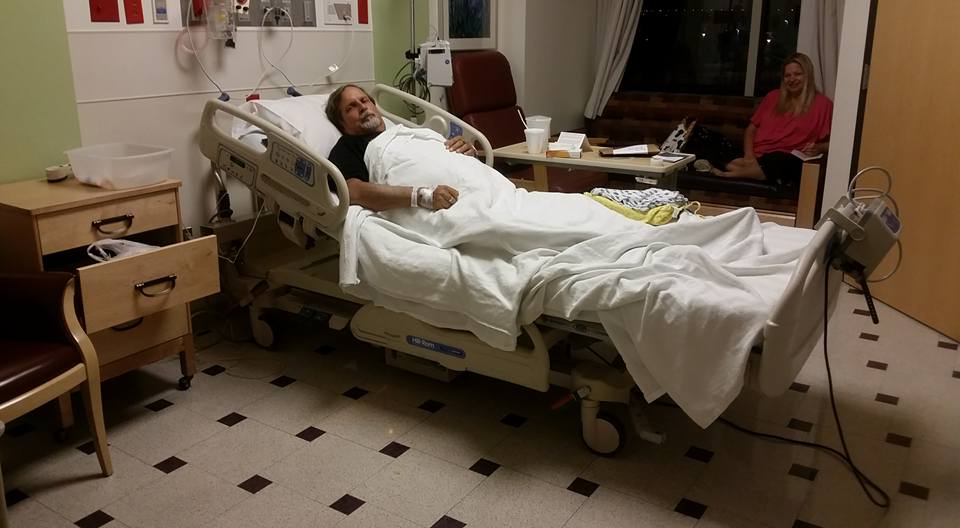 Bill in a Las Vegas hospital 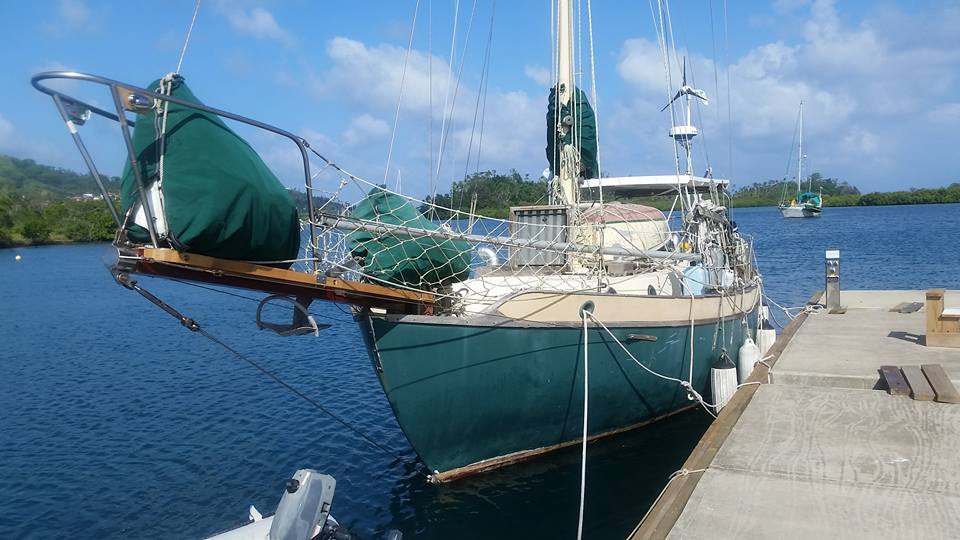 Galena just prior to her departure from Fiji

I’m betting anyone who does find Galena, Bill’s home for 10 years, and knows the story of how she was abandoned will be more than happy to return her to Bill. As for the story itself, Bill has told it pretty well himself on his Facebook page:

Start with the obvious: S/V Galena, Westsail 32 #511, my home for the past decade or so, has been abandoned at sea. As far as I’m concerned, she’s gone.

What happened, as near as I can recall at this point follows. Read if you like. I’m going to crawl into a bottle of rum for a bit. See you all on the other side.

I much anticipated my departure from Savusavu, Fiji. I’d been there far too long. The refits were all finished. She was provisioned and ready. My plan was to leave on Monday the 3rd of October.

But on the 30th of September I foolishly dropped my aluminum dinghy on my foot.

It just hurt. No broken bones. No broken skin. Hell, didn’t even leave a scrape on the skin. The foot was a bit swollen the next day. But still no discoloration, no indication of anything serious.

I decided this was a minor incident and didn’t let it affect my departure plans; including my going away party on Saturday, which was a fantastic party.

Sunday, 2 October, just a little discoloration to go with the swelling. Still no big deal.

I departed Fiji as planned on 3 October. Foot sore but not really and impediment to sailing.

On the 4th day out, it starts to go bad. There are suddenly large blisters on the skin on top of my foot. They quickly pop and I soon have blood and fluids pouring out of me. The blisters keep forming and breaking and now they are bloody. I become concerned about infection. I apply OTC antibacterial ointments. I pour hydrogen peroxide over my foot.

The next morning, 7 Oct, after a night of excruciating pain, I am convinced I need help. I’m at the point where I ask to be evacuated or I lose my foot. At 1000 hrs local I activate my EPIRB. At the normal 0300Z Pacific Seafarer’s Net call, I reported my status. I asked Peter, ZL1PWM, to see what response my EPIRB has generated.

The answer was a frustrating, “Not much.” This was 5 hrs after activation. Rescue Coordination Center, Wellington, NZ, had immediately responded by notifying RCC, Suva, Fiji. I was in Fiji’s area of responsibility. RCC Suva was “deciding” what to do.

I was expecting medivac. Nothing was happening. Peter had RCC, Wellington put some pressure on Suva. Suva responded by “asking Chinese fishing boat to stop by and “see what I needed. “

But now everyone knew what my problem was. I was in extreme pain, blood and plasma pouring out of me. A foot infection that had me worried about dying not just loosing my foot. I needed to be evacuated to a hospital. ASAP.

It’s sunset on the 7th October. The only light is Peter (https://www.northlandradio.nz). All night I’m getting advice over the radio. Much was well intended but of little practical value. Peter even gets US search and rescue to put pressure on Suva.

By now I’m sailing back toward Fiji. Unable to properly sail Galena, I’m relying on a balky Aries wind vane. And for the most part it’s holding course.

Evening of 7 October and Suva finally commits to sending a navy patrol boat. They promise it will depart Lautoka at dawn. At dawn? Why not now? It has a max speed of 14 kts, I’m doing 4 towards them.

So another terrible night. I’ve declared distress on both satellite (EPIRB), HF, and VHF. New Zealand, Australia, the USCG, they all have my story.

And then I find out that Suva has not released the Navy boat yet. I’m frustrated beyond measure. I’m crying; I’m screaming. I’m telling everyone on the radio to just go to hell.

Seas were from the east at 2.5m, winds 090 at 20-25. Galena had a full main and staysail up trying to hold 190. She was crashing along at 4.5 – 5 knots. To say it was a rough ride is an understatement. I’m barely able to hobble up the companionway ladder. I’m clearly unable to reef or change sail plan.

Peter gives me the radio frequency for RCC, Suva. Probably not a good idea. I “talk” with them. They now promise that the Navy boat will rendezvous with me at dawn, 9 Oct. One more night. USCG Fairbanks comes up and try to help by asking questions. They want to know if I’m wearing a PFD.
I’m now having hallucinations. That’s a night I barely remember.

Before dawn I grab a backpack and start collecting personal effects: passport, boat papers, a computer, a backup hard drive. A clean t-shirt. Then I think, what if they let me bring another bag? I’m looking around my little cabin. What do I want to see? Nothing seemed important to me. It was all just stuff. The most important things I couldn’t take. Like that Icom 802. Best radio on the market. Or the Vesper Marine AIS.

What would I be doing for the next few years? I pulled up the V-berth cushion opening the forwardmost hatch. There was my Bear compound hunting bow. One neat package. Easy choice.

At dawn there was the navy patrol boat. They sent over an inflatable. I threw in my bags. And jumped in. I gave Galena a final salute.

The Navy doctor made me more comfortable and dressed my foot. The crew and Captain took excellent care of me for the 9 hour ride back to Lautoka hospital.

The hospital ER Doctors said I should have come in sooner. They started talking about possible amputation. I started to explain that I has put out the call for evacuation over 3 days ago. But what’s the point.

Monday morning the doctors did the surgical debridement. I got a spinal block. I came away with my toes in place. The doctors said it should heal but may need grafts as most of the skin on the top of my foot is gone.

Tuesday, 11 Oct, was a day of rest, injections, bad food and flirting with nurses. And lots of sleep.

I booked a flight for Wednesday night to Las Vegas. There I’ll settle into the care of my sisters and the peace of zero responsibility.

I always said the boat was tougher than I was. This week proved it.

Galena is adrift in the South Pacific Ocean. Galena‘s last known position was:

Studying it myself I am reminded of my departure from Nantucket this summer, when I clubbed myself in the nose with a winch handle, drawing much blood and pain. I thought for a minute or so it might be smart to suss out the injury before taking off on an overnight passage. But I just took off anyway and didn’t suffer for it. Next time maybe I’ll think again, particularly if I’m going out on a passage of several days.

As it is I’m sort of astounded at the consequences of Bill’s having simply dropped a dinghy on his foot!

Also, of course, there’s a lesson to be learned about SAR ops in more remote locations: they may not happen too quickly!