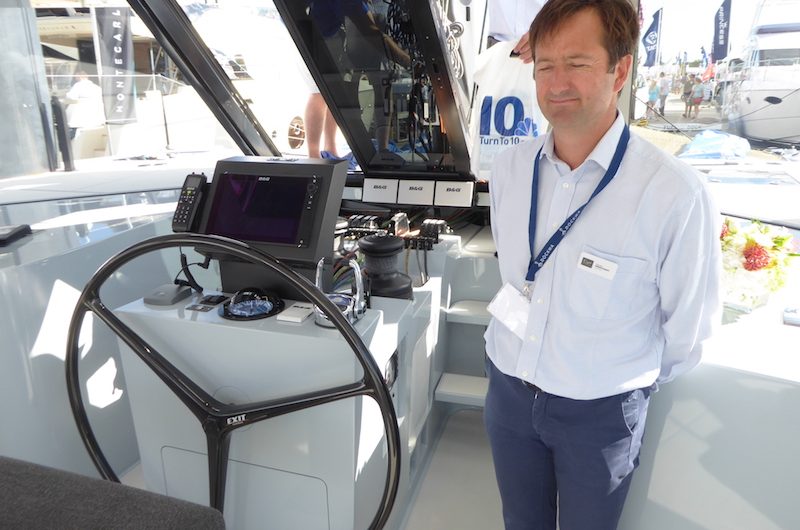 I can say without doubt the most interesting conversation I had while cruising the docks at Newport on Thursday was with this man, Xavier Desmarest, one of the principals of Grand Large Yachting, seen here closing his eyes and tapping his toes and wishing perhaps he were back in Kansas, or France, as the case may be. Grand Large, you’ll recall, is the French firm that recently purchased the bankrupted remains of Gunboat at auction. And to give you an idea of what a quirky guy Xavier can be: immediately after I snapped this shot he popped open his eyes and asked if he should take his clothes off. Which started a whole riff between us on whether there might be a market for a photo calendar filled with month-by-month shots of naked boatbuilders, kind of like the old Pirelli calendar, only weirder.

The more serious part of our conversation had to do with the future of Gunboat. As I mentioned in my last post on this subject, Grand Large has turned around some well respected French builders that got into financial trouble, most notably Garcia and Outremer, but this is their first venture involving an American builder. They’ve put on a significant push in Newport, with a new Outremer 45 and a Gunboat 57 prominently displayed on the front dock, and are planning a bigger do in Annapolis, where they plan to unveil a new Gunboat design for which they’ve already booked three prospective orders. 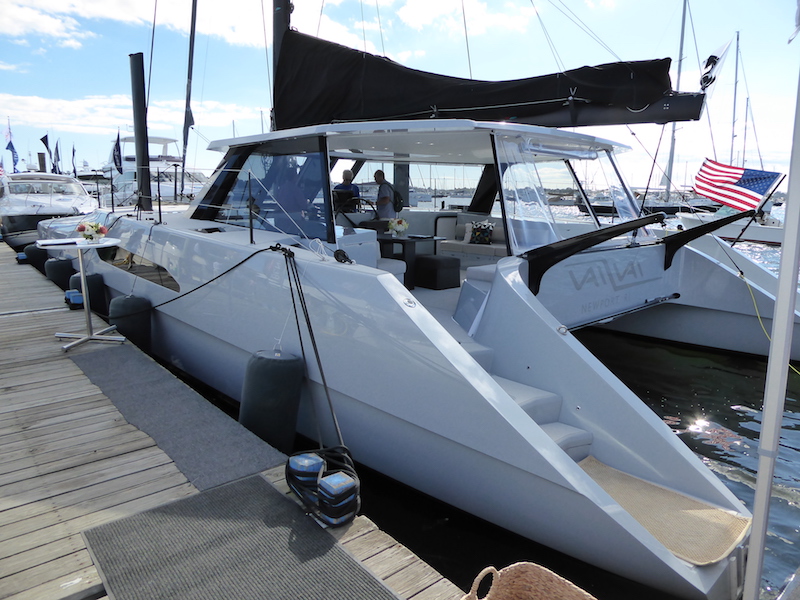 Gunboat 57 on display in Newport. This is a slightly elongated version of the Gunboat 55, which debuted at Newport to some fanfare in Newport in 2014. Unlike the 55, this boat has daggerboards instead of centerboards 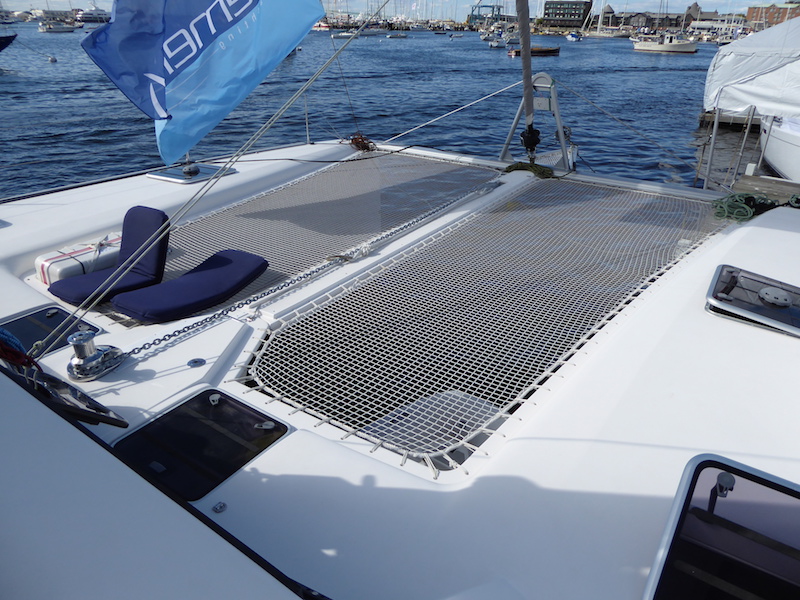 Forward tramp on the new Outremer 45. Remember this image! This is what the forward trampoline on a true performance cruising cat (more or less) is supposed to look like. Lots of tramp, little structure. (Note also: the liferaft is stowed up here; not sure I’ve seen this before.) The 45, in case you’re interested, is a slightly compressed version of the Outremer 49 I helped deliver down to Annapolis from Newport a few years ago 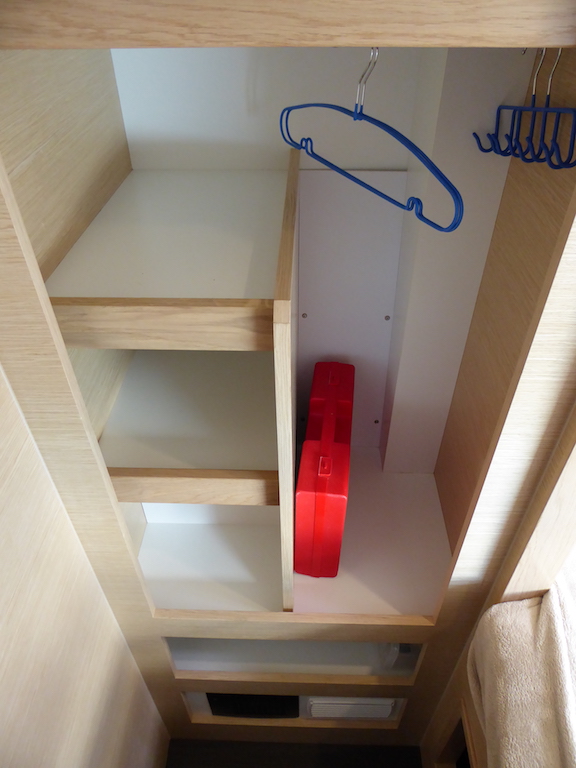 Here’s a very simple idea on the new Outremer that I really liked: leaving doors off cupboards and lockers. On a cat, which doesn’t heel, you really don’t need them, and this way it’s much easier to lay hands on things

It seems the one thing that has most impressed Xavier about the Gunboat brand is the fealty of its owners. Peter Johnstone, Gunboat’s founder, worked hard to create a strong cult of Gunboat ownership and those efforts are now paying off as the company moves forward. Xavier also expressed great satisfaction in now being able to build and market boats that are closer to the bleeding edge of sailboat construction and design.

I asked about the noxious litigation and recent legal settlement with the Chinese builder Hudson Yachts, with whom Peter had quarreled, and Xavier impressed upon me there were strong arguments to be made on both sides of that dispute. It was much better, he urged, to bury the hatchet, and it should also be easier to somehow extract Gunboat’s physical assets from Asia after peace is made.

We also fell inevitably into a discussion of the fate of Gunboat 55 hull number 1, Rainmaker, which was abandoned in January 2015. The ruined hull was recovered off Bermuda this past March and was just recently auctioned off. What if the buyer brought Gunboat that hull to be built up anew? I asked. Xavier was clearly intrigued by the notion and remarked it would be great symbolic act for the company. But ultimately he demurred: it didn’t really make economic sense, and right now job one for Grand Large is stabilizing and consolidating Gunboat’s business.

Another new American-built catamaran I was very interested in meeting was Maine Cat’s 38-footer, a lightweight open-bridgedeck cruising cat for folks who can’t spring for a Gunboat. This promises to be a lively, yet comfortable craft for go-fast multihull types, and I look forward to test-sailing one next month. 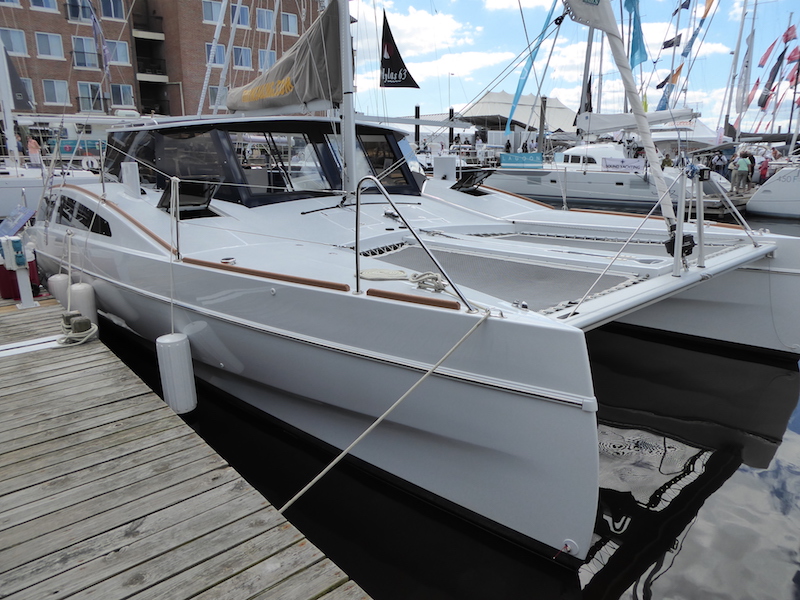 This is Maine Cat 38 hull number one, which was delivered late but has been in circulation for some time now 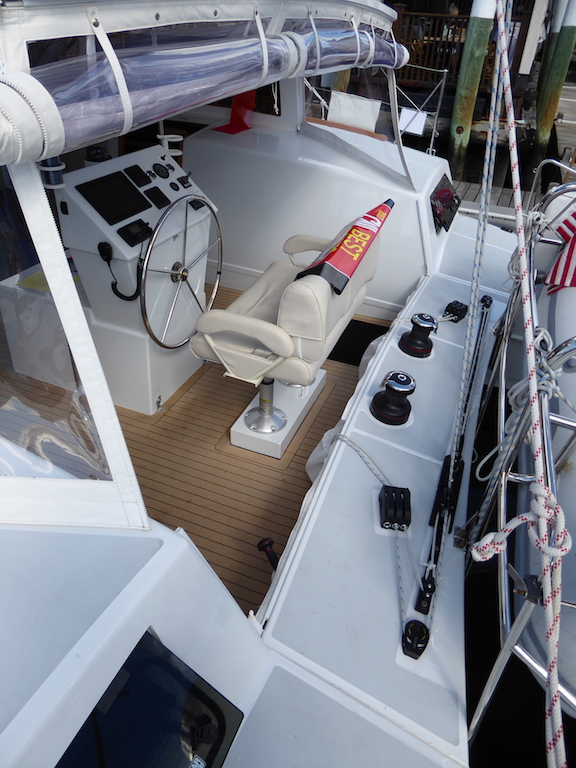 An obvious problem here is the helm seat is crowding the winches. On hull number two, soon to be launched, the helm station is moved forward and the back of the bridgedeck is more open 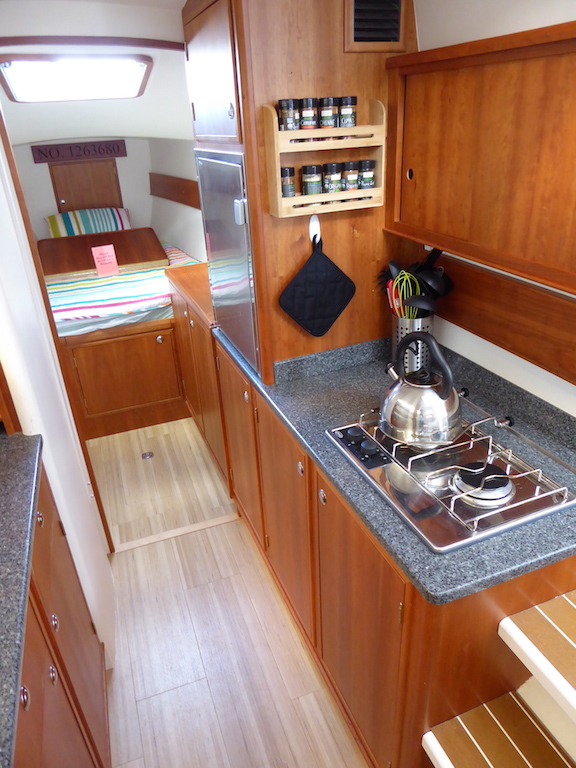 An exceedingly pleasant interior for a lightweight performance cruising cat of this size, IMHO 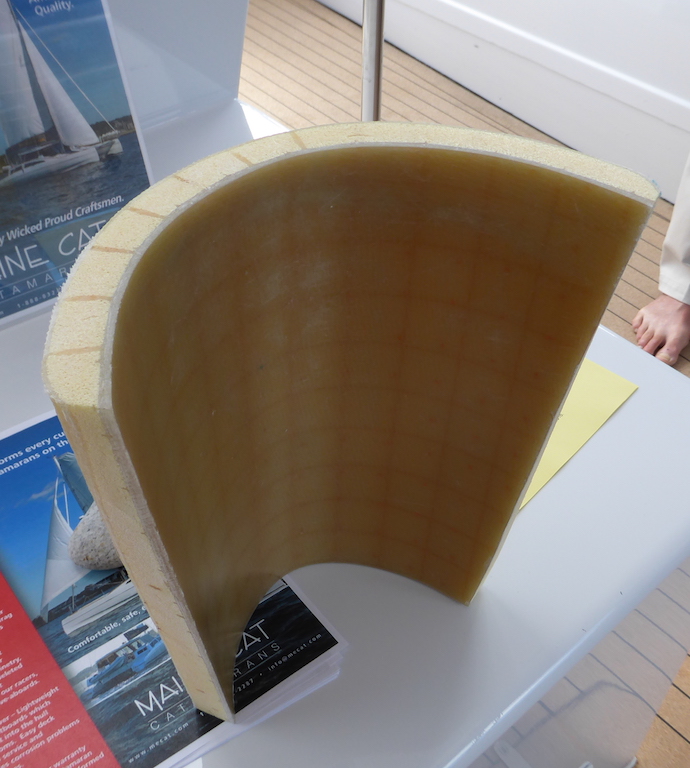 Boss man Dick Vermeulen, Maine Cat’s founder, is especially proud of his new construction process, which allows him to thermoform a boat’s foam coring on a production basis. The laminate is applied after the core has been shaped, which allows for a much more secure bond using less resin

And yes, of course, there were also new European catamarans in attendance. 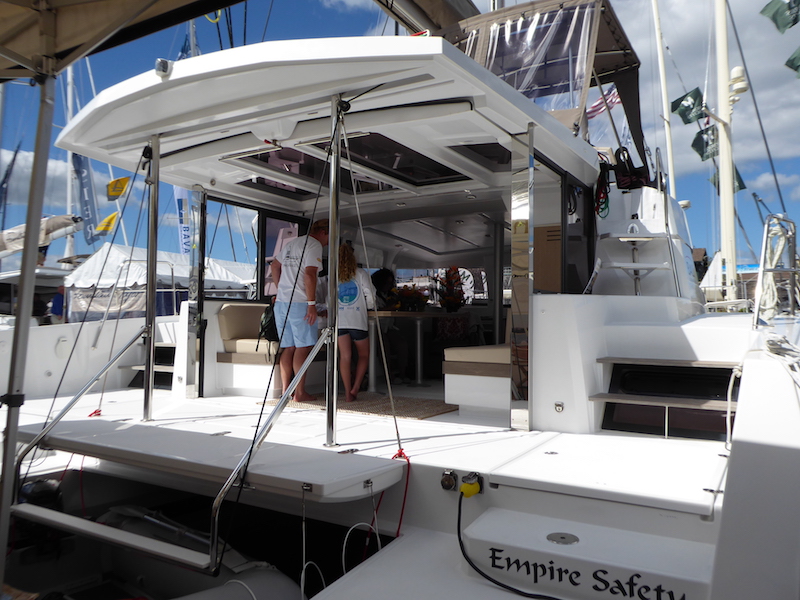 This is the back end of the new Bali 4.0, from the Catana Group in France. It’s got a swing-down garage-door type aft bulkhead that can be lowered to seal off the back of the bridgedeck saloon when you want to segregate yourself from the outside world. I’ve seen this on a much larger Bali cat and was impressed that they fit one on this smaller boat without making it unwieldy 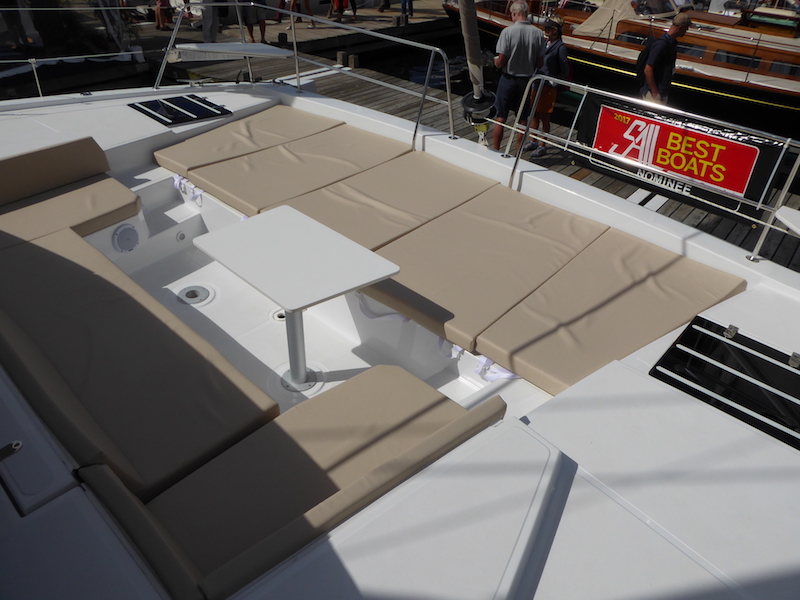 The front end has absolutely zero tramp acreage and features this comfy party pit instead. Not something you want to see on a performance cat, but on a cruising cat I guess anything goes 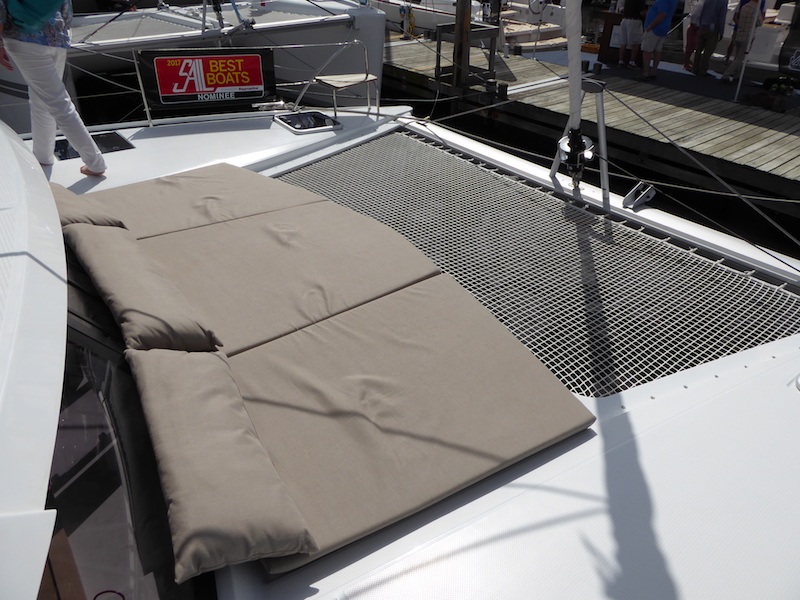 On the new Fountaine Pajot Lucia 40, also built in France, they hedged their bets a bit and only filled in half the tramp with lounging space. Frankly, to me this all seems a bit silly. Last time I checked, tramps make for perfectly comfortable lounging

Meanwhile, over in Monohull Land I was immediately impressed with a cool rigging detail I found on the new J/Boat 122e. 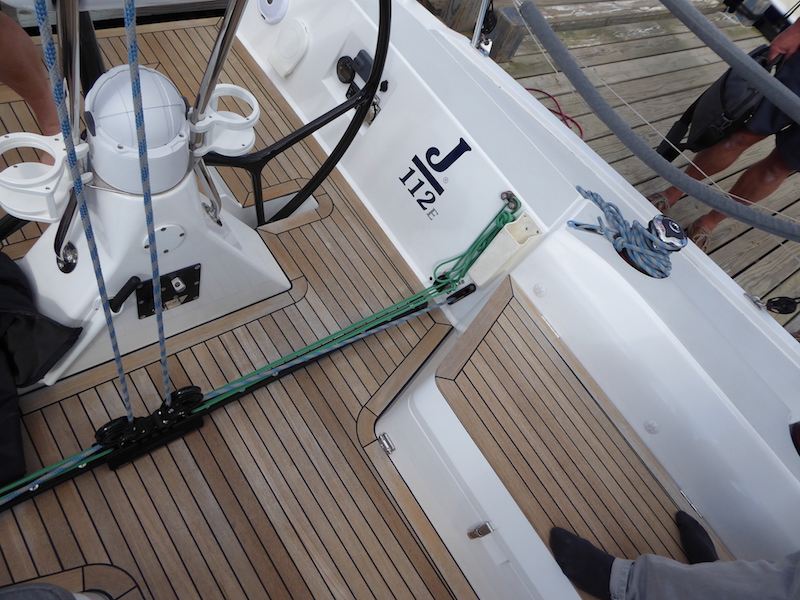 No, you don’t have to lead your double-ended “German” mainsheet all the way forward to the mast and then aft again down the cockpit coamings. Why not lead the ends right through the coamings and straight up to the winches? Less friction, less line, less weight! 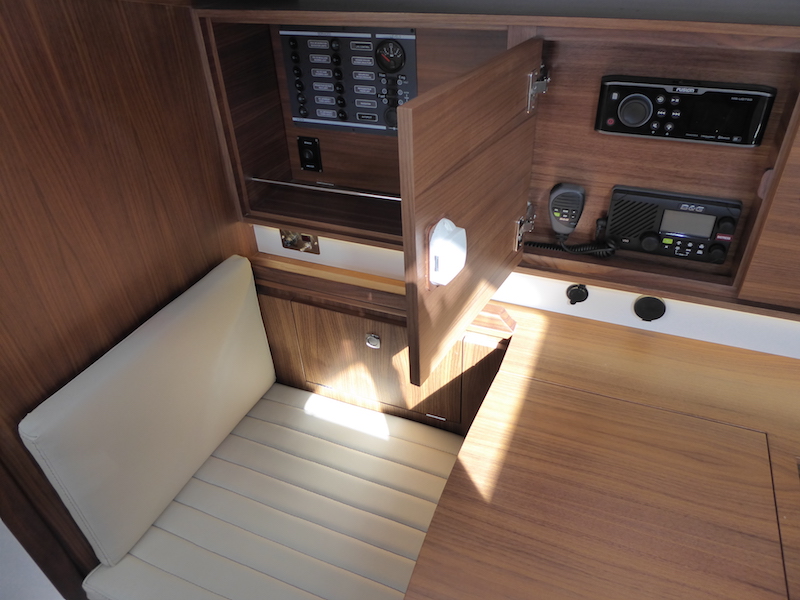 I was less impressed with the VHF installation down below at the nav station, which was hidden behind a locker door that when opened prevents you from using the radio while seated. I’m guessing most owners will remove that door with the quickness 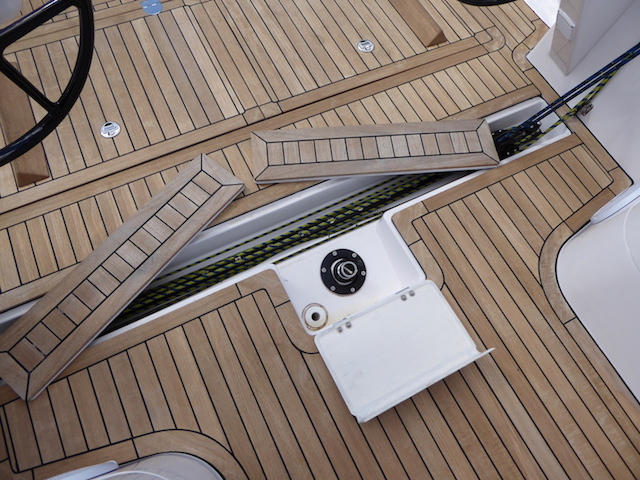 Over on the new Salona 380 from Croatia they’re still trying to hide the mainsheet traveler, at least when it’s not being used. This hide-the-traveler trend got started last year and continues apace on a few different European models 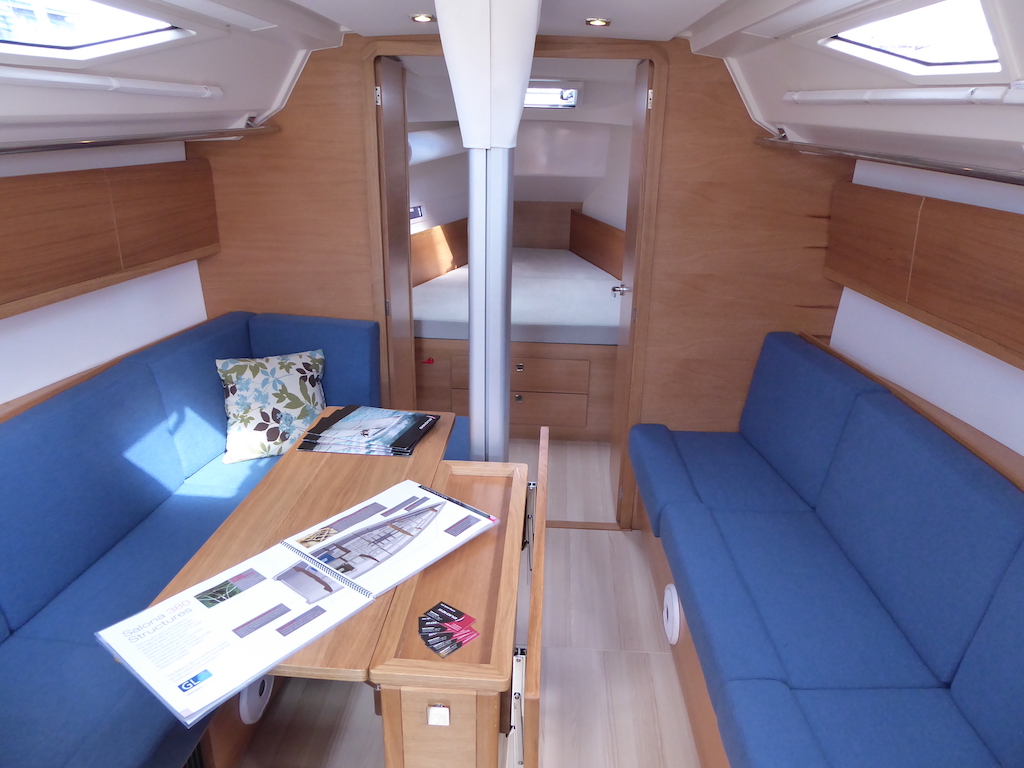 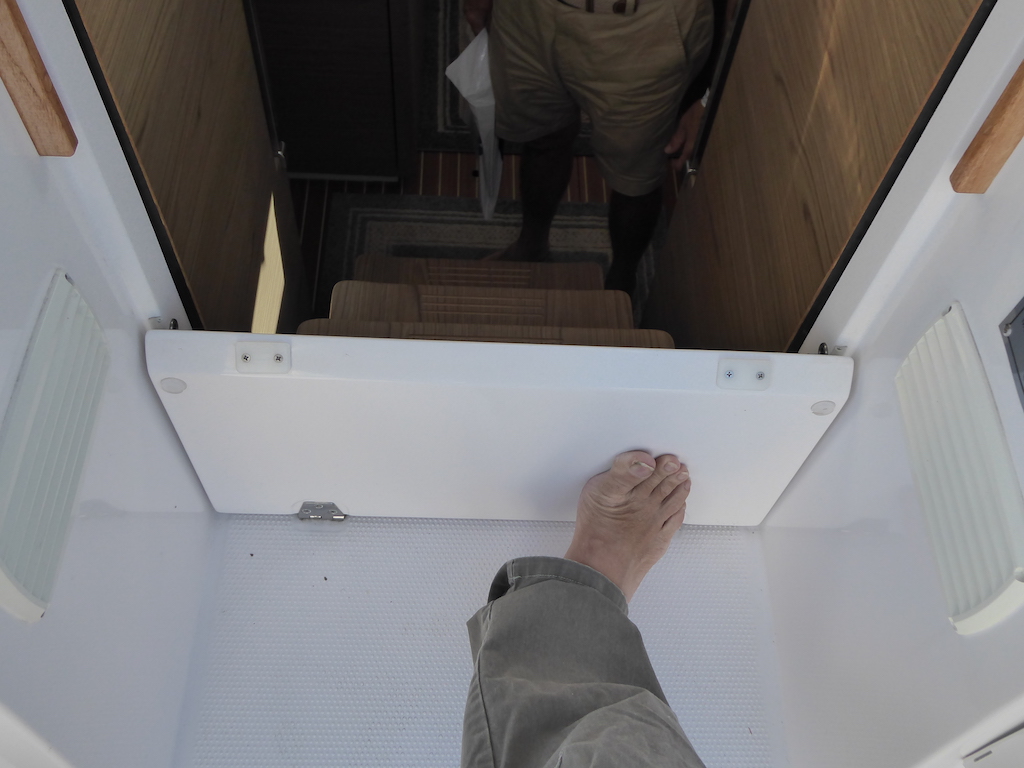 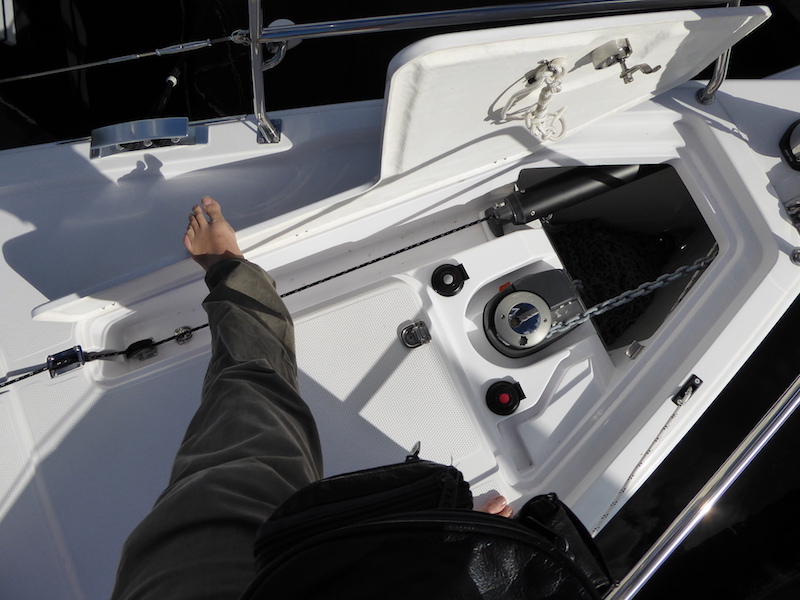 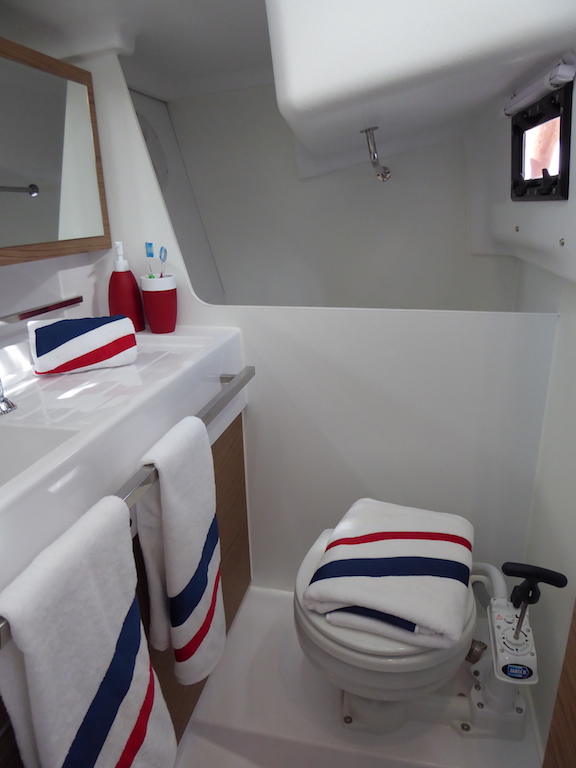 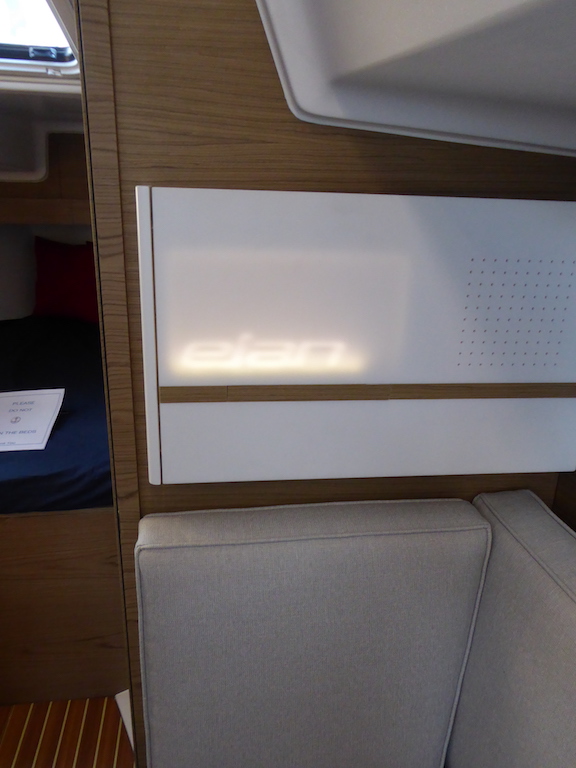 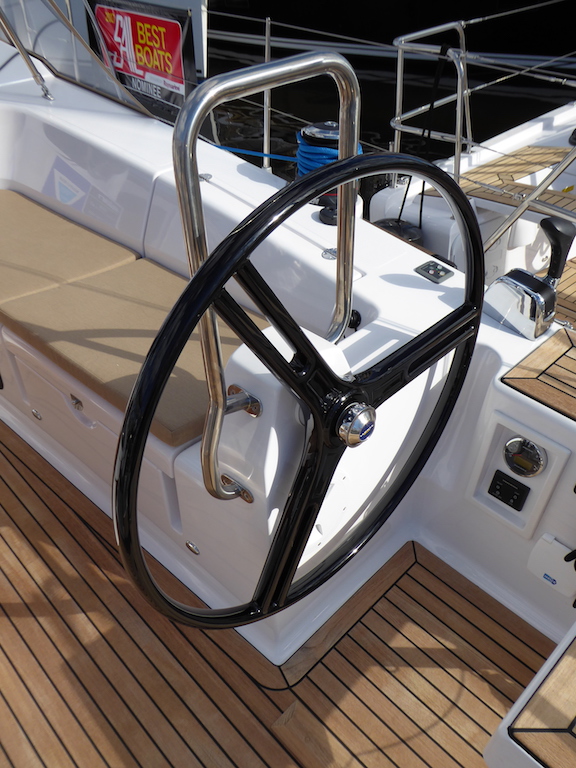 Meanwhile, on the more cruiseable Elan Impression 45 I was heartened to see the nice high granny bars behind the double wheels in the cockpit. On all too many boats these days (including the E4, I should note) the binnacles behind the wheels are much too low to hold on to 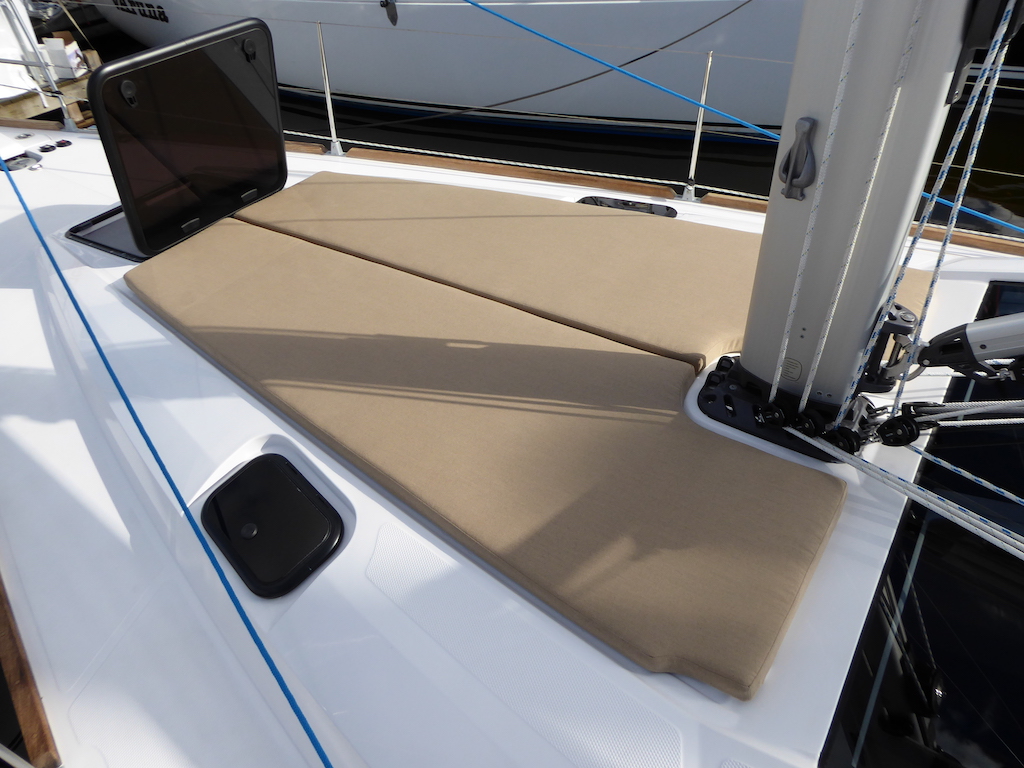 I was less impressed with the Impression’s vast cushioned foredeck, though it would be easy enough, I suppose, to stow the cushions in a garage somewhere and forget about them 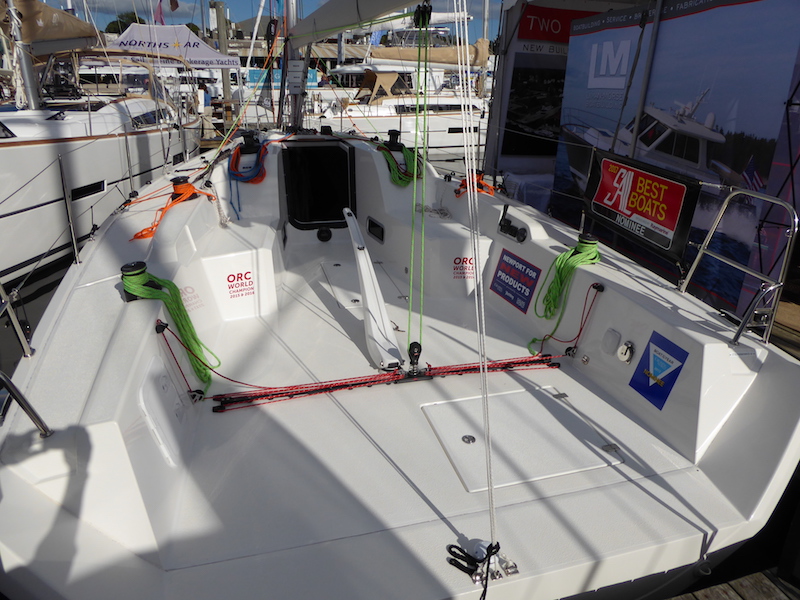 The monohull that impressed me most was this Italia 9.98, a very competitive ORC racer from Venice, Italy. All the control lines are well laid out, crew ergonomics look good, and it just looks hot! 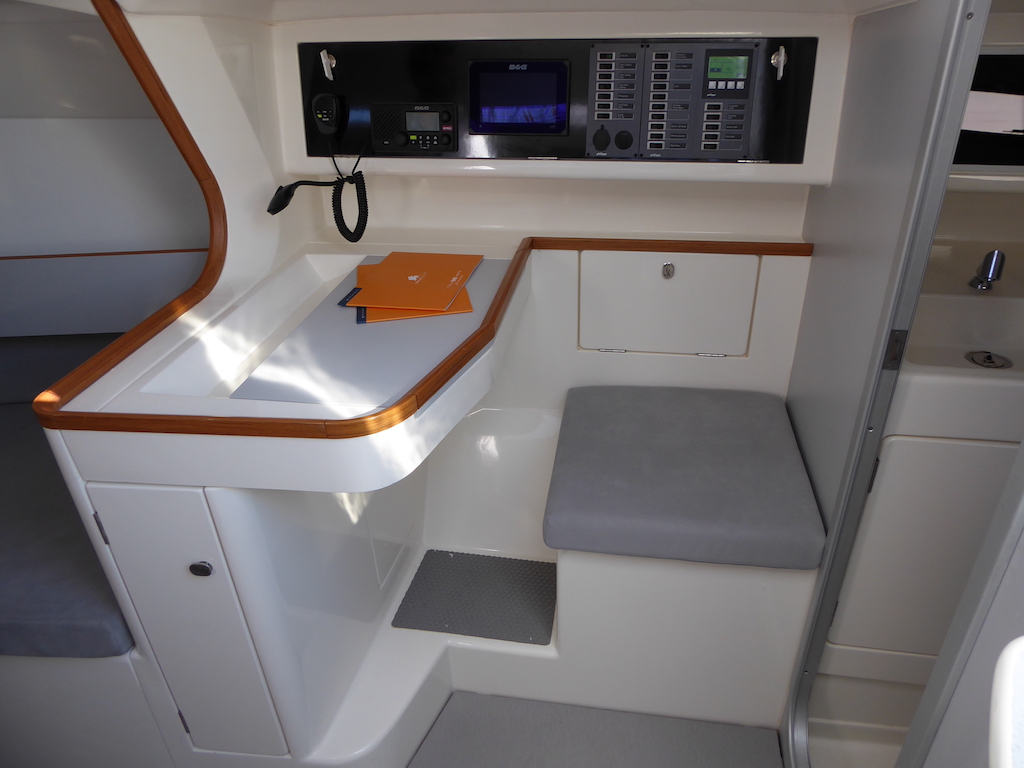 I particularly liked the classy interior. It’s all stripped out racer-style, but just a little bit of wood trim in a few strategic spots goes a long way to making it a much warmer, more stylish space. The Italia 13.98 won a Best Boats nod from SAIL last year, and I imagine we’ll be giving this smaller, racier sister a hard look as well this year

Today’s the last day of the show, so if you’re within range you should be sure to check it out.