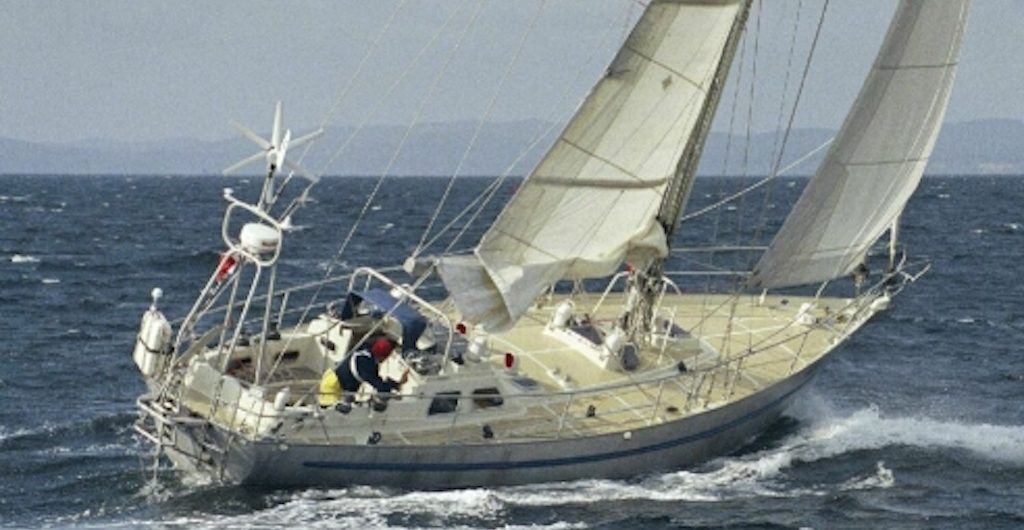 Speaking of aluminum boats, some of you may be wondering whatever happened to Taonui, the 41-foot German-built full-keeled expedition vessel that Tony Gooch sailed on a solo non-stop circumnavigation back in 2002-03. It was an impressive voyage, the first-ever non-stop circuit via the great capes sailed from the west coast of North America (Victoria BC in Canada to be precise) and also a very impressive boat (see image up top). I know I admired her intently and in fact it was my respect for Taonui that inspired me in part to acquire Lunacy, my aluminum Tanton 39, going on 10 years ago.

So I was a little jealous when I got a note last month from an online acquaintance, Randall Reeves, tipping me off that he had recently purchased a 41-foot full-keeled aluminum boat built by Dubbel & Jesse in Norderney, Germany, in 1989, now called Gjoa, but formerly named Taonui. The very same vessel. Randall first got in touch last year, seeking advice on tin boats, as he wanted to find one to take on what he calls the Figure-8 Voyage, a solo non-stop circumnavigation of first Antarctica and then the Americas via the Northwest Passage, all in one year. Now he has a perfectly appropriate boat and is training up for a departure from San Francisco next fall.

Scoping out Gjoa’s history on Randall’s well-written website I was a little surprised to see that she was originally built as Asma for a German sailor/journalist, Clark Stede, who commissioned her specifically for a voyage around the Americas that he made with filmmaker Michelle Poncini back in 1990-93. This factoid triggered some dim recollections in my mind of reading about Stede back when I was traipsing about the North Atlantic on my old Pearson Alberg yawl Crazy Horse. (So it seems I have in fact been following this boat practically since she was born.) 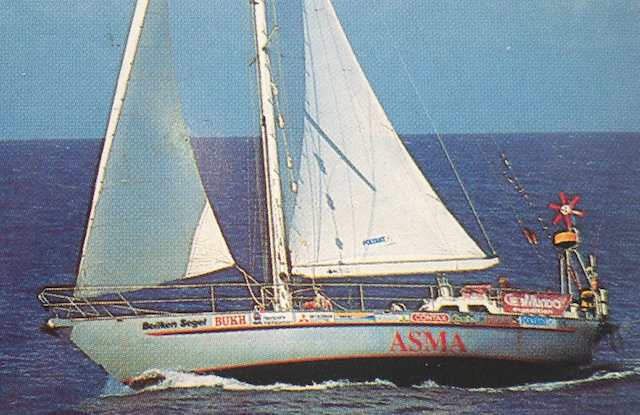 Asma in her original incarnation. Note the nice collection of sponsor’s stickers and the old-school hank-on jib

Tony and Corwyn Gooch bought the boat from Stede in 1994 and cruised her for several years before Tony finally set out on his great solo circumnavigation in 2002. The Gooches in turn sold the boat to Ann and Glenn Bainbridge, who renamed her Gjoa (after the vessel in which Roald Amundsen first transited the Northwest Passage in 1903-07) and then set out themselves aboard her on a two-year transit of the Northwest Passage. 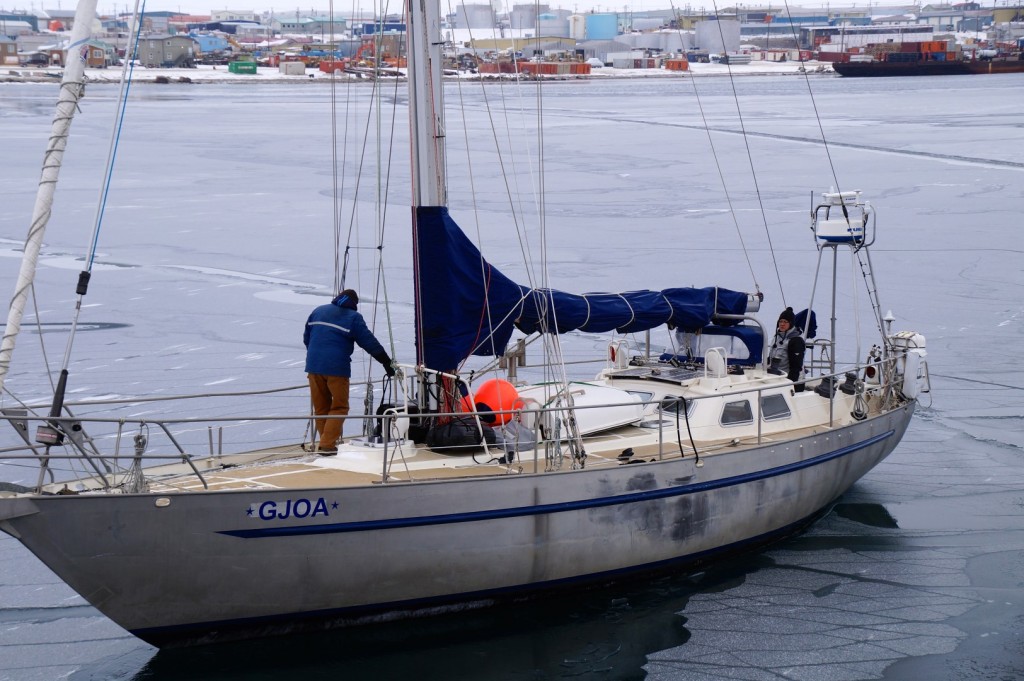 In her latest incarnation as Gjoa

Randall first encountered the Bainbridges and their boat way up in Nunavut, Canada, as they were humping over the top of the Americas in 2014. Then last winter when he found the boat was for sale in Homer, Alaska, he jumped on it.

There’s obviously no doubt this boat is fully capable of sailing the route Randall has laid out. Both the Southern Ocean and the Northwest Passage are old hat for her. The random factor is Randall himself. He had previously done two long Pacific passages, one singlehanded, and has also crewed on a boat through the Northwest Passage (hence that random encounter up in Nunavut). Now he seems to be gearing up for his Figure 8 challenge in a very deliberate way. 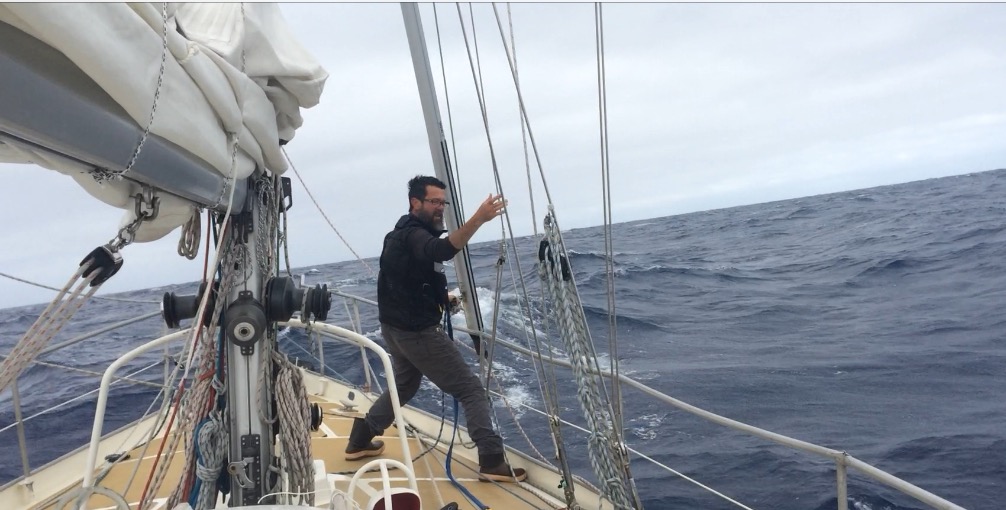 Randall on the foredeck 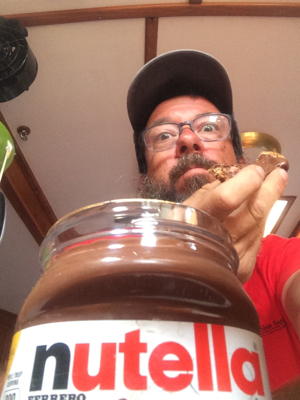 Randall gets into the Nutella 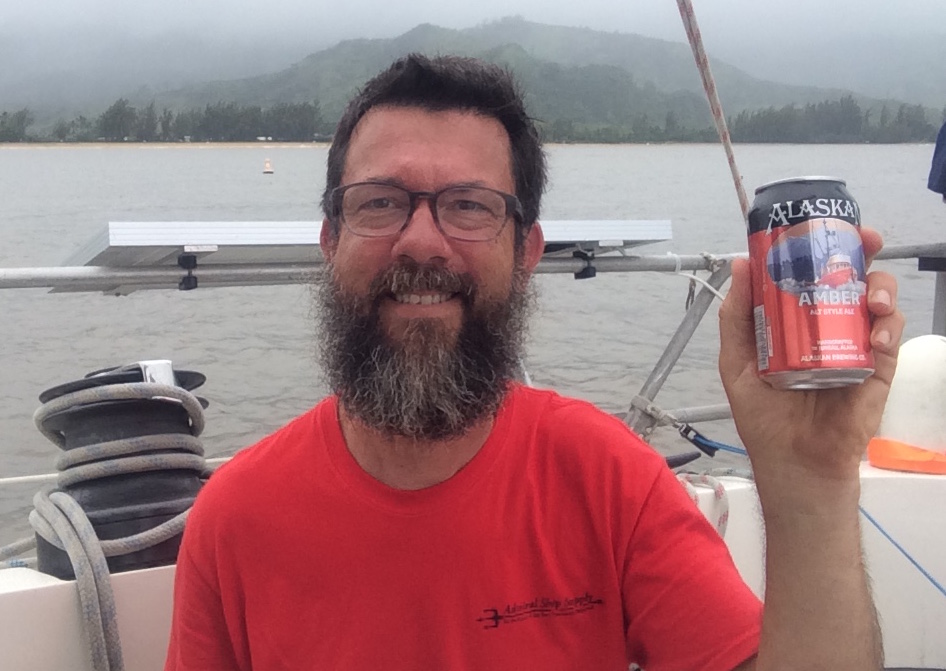 Randall with his last beer (Alaskan, of course) 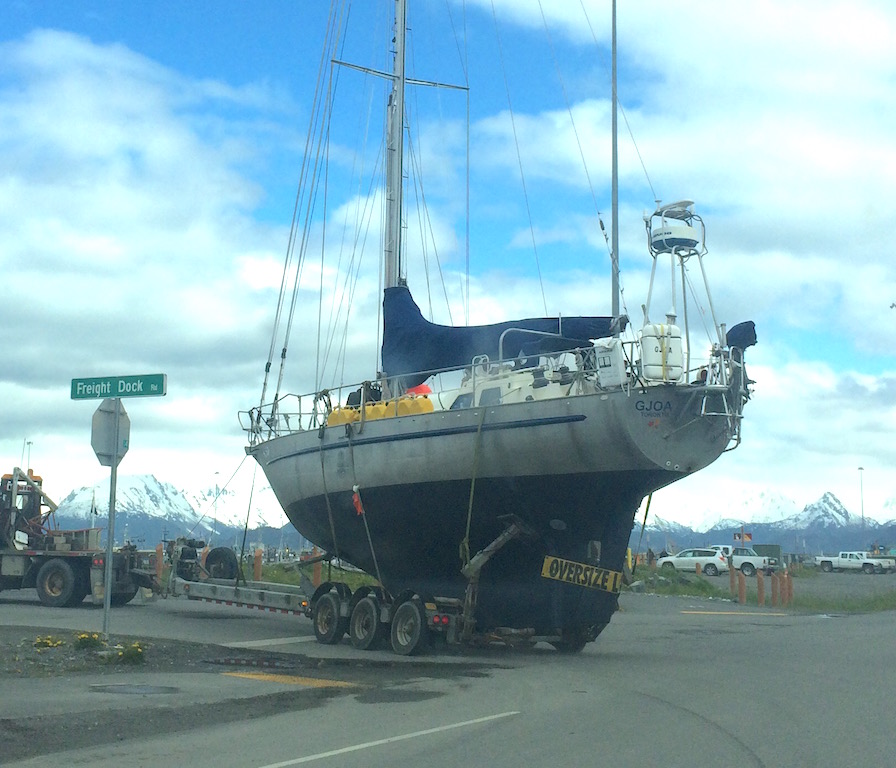 A glimpse of Gjoa’s underbody. You actually don’t see many tin boats with keels like this. I think she’s faster than she looks!

He’s already sailed Gjoa singlehanded across the Gulf of Alaska to the Strait of Juan de Fuca, then from there to Hawaii. This month he’ll be sailing from Hawaii back to his home in San Francisco. He does a very good job of writing up his passages while en route, so I urge you to follow his adventure as it unfolds.

PS: An update on the Lunacy for sale front: she is currently under contract pending a survey. So keep your fingers crossed for me. Once the sale is final I’ll start sharing details of what comes next.