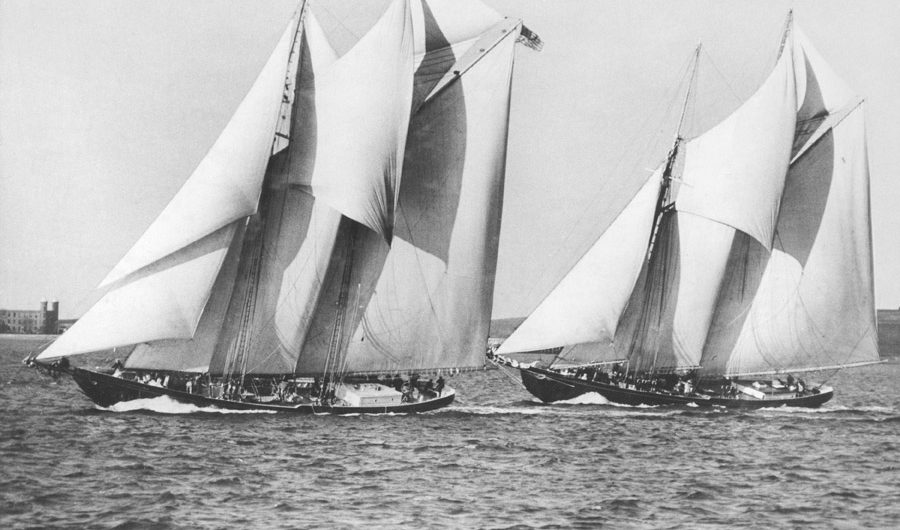 Back in the 1930s the next most important match-racing event after the America’s Cup didn’t involve yachts but fishing vessels. The Sir Thomas Lipton International Fishing Challenge Cup had only a brief tenure in the annals of competitive sailing, but it commanded major media attention at the time. Effectively a grudge match sailed between Canadian and American Grand Banks fishermen, the event was run was just three times, and each time featured the same two competitors, the famed Canadian schooner Bluenose (on the right in the image up top) and the American schooner Gertrude L. Thebaud (on the left).

Bluenose was renowned for her speed, but the Thebaud crew pulled off a great upset in the 1930 when they defeated their Canadian rivals 2-0 in the first series. Bluenose had her revenge, besting Thebaud 2-0 the following year. The very last event, a best of five series sailed out of Gloucester, Massachusetts, in October 1938, was by far the most dramatic. 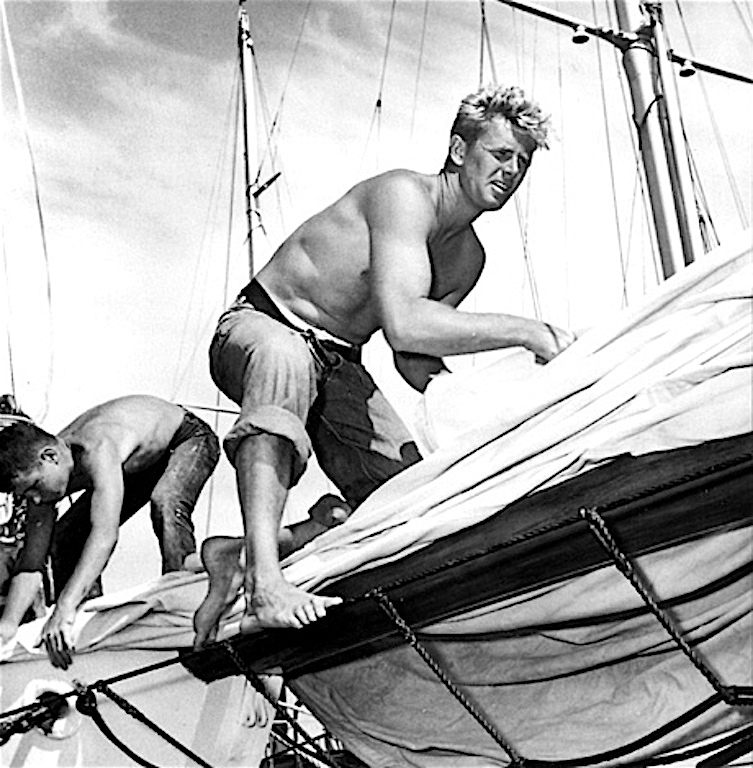 Sailing aboard Thebaud was 22-year-old Sterling Hayden, an experienced schooner hand who served both as mastheadman and navigator. A fantastic account of the third race in the series appears in his autobiography Wanderer:

Captain Angus Walters swung his big salt-banker Bluenose in past the Boston lightship, strapped her down, and sent her rampaging up harbor in time for a welcoming luncheon thrown by the governor on behalf of the Commonwealth. Those who were there pronounced it a dandy affair: plenty of dames, plenty of booze, plenty of platitudes. Captain Angus wasn’t there. He stayed by his vessel instead. “Let ‘em spout,” he barked. “I’m getting ready to race.”

The mayor of Gloucester passed the word to the better saloons on Duncan Street that he expected a little decorum, a little restraint… during the racing. When they heard this, the boys in the red jack boots and the checked shirts smiled. Saloon keepers are smart: by the time Bluenose arrived there wasn’t a piece of moveable furniture in a single waterfront bar.

October came in like a lamb, mewed for a few days, roared like a lion for the better part of two weeks, then trailed off into November. The first two races were sailed in moderate winds and sunshine. Thebaud took the first one by thirty seconds, and Bluenose waltzed off with the second. During the scheduled three-day hiatus that followed, Gloucester got down on its knees and prayed for a living gale. While Gloucester was busy praying, Angus Walters took advantage of the moonless midnight hours to scan the weather forecasts and juggle around with his ballast. When the Clerk of the Weather predicted a breeze of wind–into Bluenose went an extra ton or two of pig-iron ballast. When the Clerk called for light airs–back on the wharf went the pigs. Pretty clever. It was also against the rules that governed the races. But Captain Elroy Proctor of the Master Mariners Association and Miss Ray Adams, Ben Pine’s partner, were pretty clever too. They sprinkled a layer of sand over the ballast pile, and Angie was caught red-handed. “Some cute,” said Gloucester. What Angus said did not appear in the Gloucester Times. Everybody shrugged. After all, the little Lunenburger was more than just a crack racing skipper: he was renowned as a dairyman, and like all businessmen he wanted to win and to hell with your goddamn rules.

The day of the third race dawned with rain and a driving easterly gale. All but one of Thebaud’s crew smiled, and I was the one who didn’t. The reason was simple enough: only the day before, I had been turned from mastheadman to navigator because my predecessor had got all but lost in the second race. To make things worse, Captain Pine was in the hospital with a sinus attack.

A cannon on the Coast Guard boat let go with a puff of smoke and the race was on. Both schooners hit the starting line going twelve knots and the Canadian pulled ahead. Captain Cecil Moulton hung to the Thebaud’s wheel with his boots full of water and his cap rammed down on his eyes. We averaged thirteen and a half to the first mark, where forty brawny Gloucestermen lay back chanting and straining on swollen manila sheets. “Haul, you bastards, haul!” cried Harry the cook, buried waist deep in the hatch, clutching his derby in one hand, a mug of rum in the other.

The Bluenose tore past the plunging buoy two lengths ahead of us and swung hard on the wind. Her long black snout, streaming spray, reached over a steep sea, then fell like a maul into the trench beyond. Her scarred old timbers shuddered. Her spars pitched hard against their tracery of shrouds. High far aloft, her foretopmast backstay parted and the wire rained down on deck. Fiery Angus–never a man noted for patience–laid down on the wind-honed waters a savage barrage of four-letter words.

With this stay gone, they were forced to strike their big jib topsail. The smaller Thebaud forged by to windward, slogging her way uphill now, through charging white-plumed seas. This was the windward leg. Fifteen miles away, dead into the eye of he wind, lay a small white buoy. The visibility was about two hundred yards at best–less in the squalls, of course. Back and forth the two great wagons tacked, sawing away at the base course. When they came about, you could hear the flogging of canvas halfway to Scollay Square. I’m all right, I kept reassuring myself, so long as the wind doesn’t shift. If we can’t find the buoy, they’ll not blame me too much, what with this horsing around, first to the southeast, then to the northeast–with Christ knows what for a current setting beneath the keel. But if the wind should haul and we run for the mark–and I have to conjure a fixed course–what in hell then?

The wind hauled. I pored over the chart, gauging and guessing and praying. I crossed myself twice, exhaled with resignation, and called out to Cecil: “Let her go east by south and a quarter south.”

“East by south and a quarter south it is!” his voice came through the hatch. I wished I were Irving Johnson. I wished myself back on the masthead, where there was nothing to do but curse, work, and spit downwind–all the while thinking how tough you were. I took the binoculars and made my way forward past the prone bodies of thirty men–half of whom were skippers of lesser craft. I climbed halfway up the lee fore rigging, locked my legs through the ratlines, and smoked. For forty minutes she blazed a trail with her rail buried deep in foam. The harder I looked the less I saw. Either that, or there were buoys everywhere: dozens of baby buoys bouncing around, plunging like pistons between helmeted seas.

“That’s it, isn’t it, Hayden?” Cooney the sailmaker called from his place in the bows.

“I think so,” I called back calmly, seeing nothing yet, stealing a glance at him, from under my binoculars. The Bluenose was far astern. The buoy lay dead ahead. If Cecil hadn’t knocked her off a touch, we might have run it down. You lucky bastard, I muttered under my breath; and swinging down to the deck I sauntered aft, looking the world in the eye, vindicated, my belly afire with pride.

Rounding the mark, we flew downwind like a gull, bound for the finish line. The Coast Guard boat, with its cargo of seasick race committeemen, had quit and run for the cover of Boston. We clocked ourselves across the line. But fishermen are casual about some things. Nobody knew for certain whether we should leave the marker to port or starboard; so we finished twice for good measure, then jogged along slowly, the gang all on their feet, tired, but not too tired to line the rail and give three cheers when the big Queen of the North Atlantic came booming down on the line. 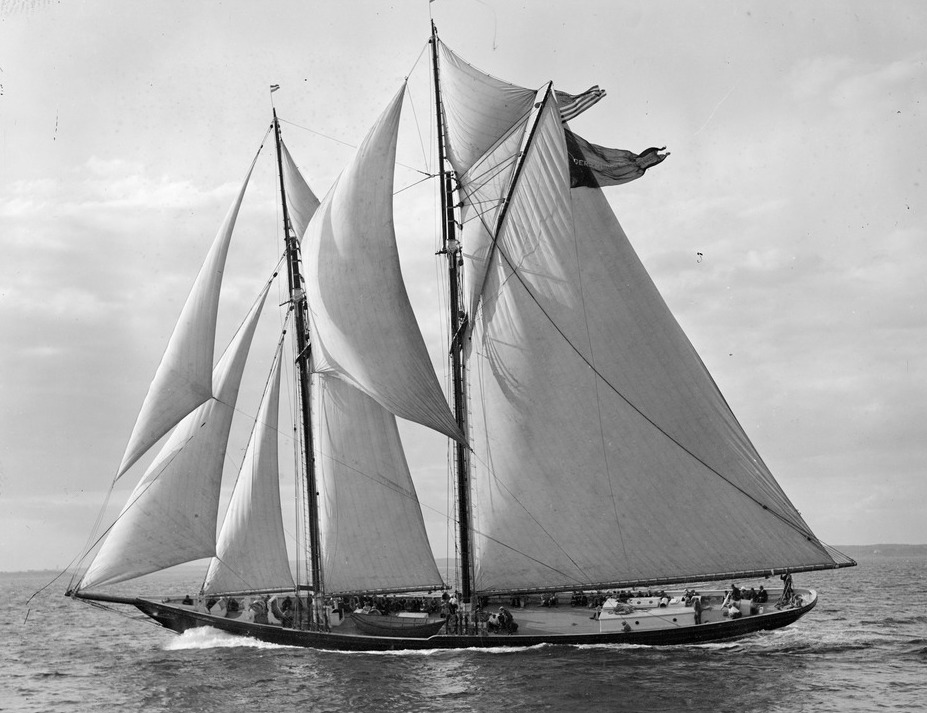 Gertrude L. Thebaud in all her glory

Alas, Bluenose went on to take the next two races and won the series 3-2.

Here’s some color film footage from the fifth and deciding race, which obviously was sailed in much more sublime conditions than the third:

For Hayden the series was still a victory of sorts, though perhaps a bittersweet one, as the Boston press took special notice of his striking demeanor. “More than a few of the scores of women who viewed the vessels inquired as to his identity,” wrote the Boston Post. And this, ironically, was the beginning of the notoriety that led the young man into a career in movies.

My favorite role of his was when he was older and played General Jack D. Ripper in Dr. Strangelove in 1964. 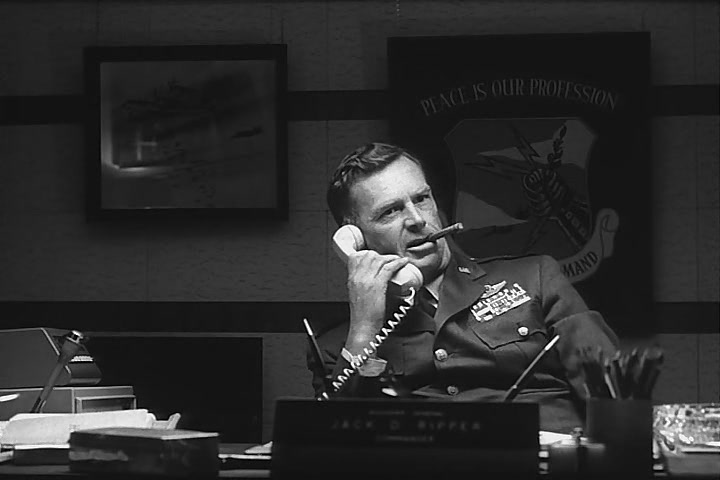 It was Ripper’s obsession with his bodily fluids, you may recall, that led to the start of a thermonuclear war.

As for Hayden, he publicly despised the film business and always wished he was back aboard a schooner.