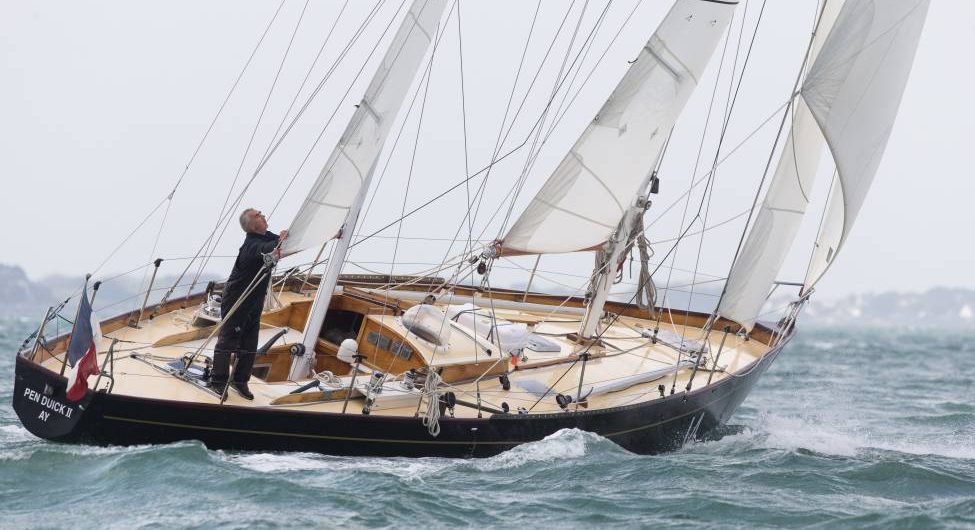 This year’s singlehanded transatlantic race out of Plymouth, England, dubbed the Transat bakerly in honor of the title sponsor, a French snack company that evidently eschews the use of capital letters (just like e.e. cummings), is finishing up now in New York, and I’m crying in my beer because the two sailors I’m most interested in have had to drop out. These would be Isabelle Joschke, who was leading the Class 40 fleet aboard her steed Generali-Horizon Mixité, and Loïck Peyron, who was doing a blast-from-the-past trip aboard Eric Tabarly’s old ketch Pen Duick II (see image up top). Both my heroes (sob) officially retired yesterday due to damage sustained by their boats.

I was interested in Isabelle for the simple reason that I once had a chance to sail with her, about 12 years ago, on a delivery aboard a new J/133. In those days she was a hot-shot Mini sailor, which I actually didn’t figure out until later, because she was so damn quiet and self-effacing. (Which is impressive in itself, of course, and is characteristic, I’ve noticed, among French singlehanded ocean racers.) This race was Isabelle’s first outing on a Class 40, and she was doing very well obviously, until Friday (the 13th!) when she discovered a crack in her bow that was leaking badly. She had to turn downwind (the course being mostly a grueling beat to windward) and now, having patched the leak and bowed out of the race, is heading to St. Pierre up by Canada.

As for Peyron, his situation is a bit more mysterious, as apparently all that happened to him was he tore up his staysail. He claims he can’t sail to windward without it, which may well be the case, but I have to wonder: No spare? You can’t repair it?

I’m sure there’s more to this than we’re being told, but what a disappointment! Peyron is now sailing back to Quiberon, in France, where lies the sailing school he borrowed the boat from.

Could it be they got nervous and ordered him back???

For the record we should also note that the line-honors winner was a honking big trimaran (100 feet), sailed by François Gabart. Good on him!