Hide the family jewels! The Vikings are coming! The 115-foot Norse longship Draken Hårald Harfagre has just set out from Norway and is bound to North America via Iceland and Greenland. Ultimately Hårald and her crew plan to roam as far inland as the Great Lakes before raiding the Big Apple and Mystic Seaport in September and October.

But first, of course, she must have technical difficulties. Hårald departed Haugesund, Norway, on April 26 and immediately had to put into Lerwick in the Shetland Islands to repair a busted shroud. (Coincidentally, she also put into Lerwick two years ago after she was dismasted on a shakedown sail.) Repairs now complete, the Norse horde set sail again and just yesterday landed at Torshavn in the Faroe Islands, where they are waiting for a weather window to continue on to Iceland. 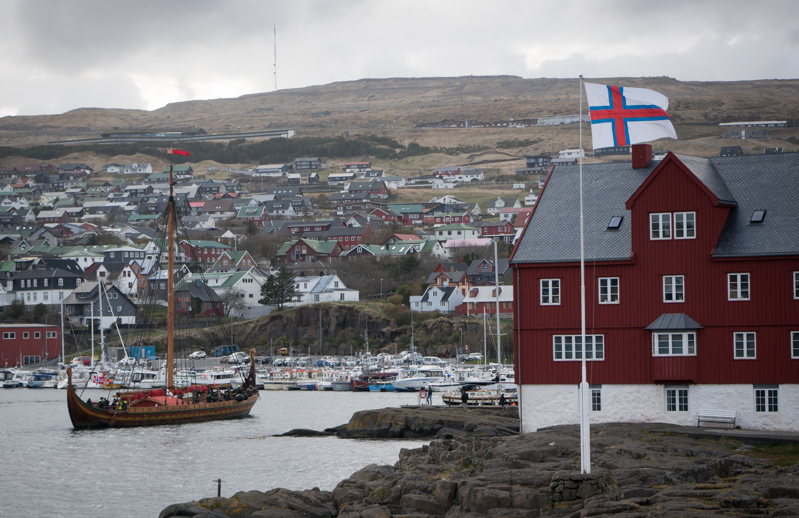 Moored in the Faroes

For reasons I do not understand, my first post on this expedition, wherein I helped publicize the fact that Hårald was seeking volunteer crew, became by far and away the most popular tidbit ever published here on WaveTrain. The site was overwhelmed with traffic and I had to seriously upgrade my server capacity to keep up with it. Apparently there are many more wanna-be Vikings out there than anyone realized. Unfortunately, the folks who run the ship don’t seem to have much of a website budget and haven’t posted anything about any of the crew they selected. 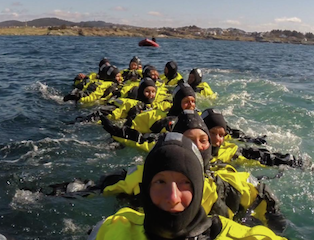 Anonymous crew engaged in a man-overboard drill, wearing modern foulies to stay dry. In the old days they would have been covered with whale grease

They have posted this nice video, where you can see many of the crew at work, pulling on big ropes together, plus listen to the captain and chief rigger explain what they are about.