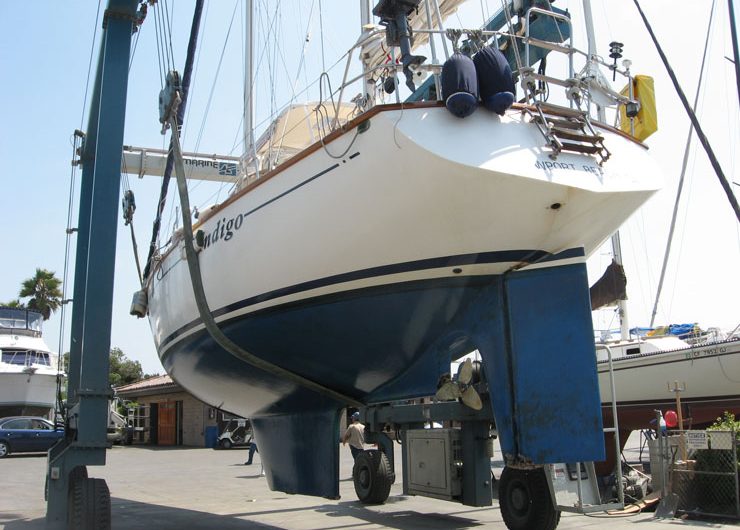 Though they seem like very simple devices, propellers are in fact quite complicated. More often than you’d expect, problems with a boat’s performance under power can be traced to poor propeller selection. To drive a boat well a prop must be properly matched to whatever engine and transmission is turning it, and numerous variables–the engine’s horsepower, its operating and maximum potential rpm and shaft speed, the boat’s speed potential, and the dimensions and specifications of the prop itself–must be balanced against each other to achieve good performance over the broadest range of circumstances.

Even professionals sometimes get this wrong. The very best resource on the subject that I know of is Dave Gerr’s very helpful and comprehensive tome The Propeller Handbook (International Marine/McGraw Hill, 1989). When matching a prop to an engine you should consult this book, or give a copy to the professional you hired to do it for you.

Selecting a propeller for a sailboat is complicated by the fact that when a boat is actually sailing you very much want for the propeller not to be there. Don Street, who removed three different engines from his old yawl Iolaire, estimates that a propeller increases total drag by 5% to 10% when a boat is sailing at hull speed and by as much as 30% to 40% when sailing in light air. Unfortunately, the features that most improve a propeller’s efficiency under power–primarily greater wheel diameter and more blade area–serve only to increase drag when sailing. For racing sailors this conflict is easily resolved, as they will happily accept a large decrease in powering ability to sail faster. For cruisers who spend a lot of time motoring but also want to sail well, it is a much harder call.

In terms of maintenance, it is best to have a fixed prop. This is merely a single solid piece of bronze, and beyond wrapping a line around it or hitting and mangling it somehow, there is nothing that can go wrong with it. All you need do is keep it smooth and clean and make sure it’s protected against galvanic corrosion with an appropriately placed zinc. The downside is that it cannot change shape to minimize drag when the boat is not motoring. To maximize sailing performance you can install a narrow two-bladed fixed prop with a reasonably small profile. On old full-keel CCA race boats the trick was to mark the propeller shaft inside the boat so the shaft could be locked in place with its fixed two-blade prop lined up with the keel immediately in front of it, thus reducing drag to a minimum. But a two-blade prop, particularly a narrow one, performs poorly under power and creates lots of vibration. A much bigger, more efficient three-bladed fixed prop provides a much smoother ride and drives a boat much faster under power, but it also greatly increases drag. 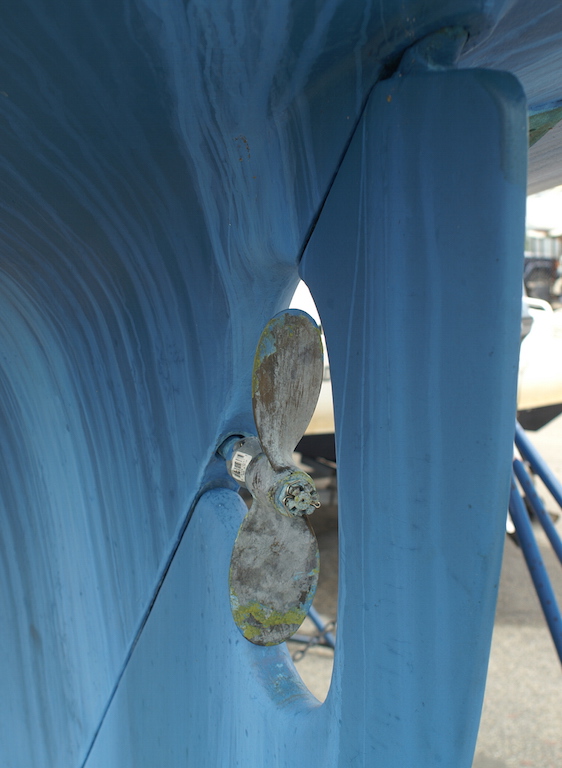 An old-fashioned racing prop. Keep it to two blades and hide them behind a full keel

There are propellers that can change shape and streamline their profiles when a boat is sailing, but these are more complicated and have several moving parts. These parts normally must be greased on a periodic basis, are more vulnerable to corrosion, and are subject to wear over time. The two major variations are folding propellers, where the blades collapse backward and fold together to minimize their profile, and feathering props, where the blades twist and align themselves with the water flow.

Folding props are sleekest and fastest when closed, thus are favored by racing sailors. Older designs have two narrow independently hinged blades that fold straight back flat when closed and spin open when the prop shaft starts turning. When closed their profile is very small, but under power performance is generally miserable, particularly in reverse. The hinges are also easily fouled with marine growth. When this happens the prop may not open at all, or only one blade may open, which causes severe vibration. Newer folding props can incorporate three blades, which greatly improves performance under power, and have bevel gears rather than simple hinges in the hub, so that all blades must open and close together. 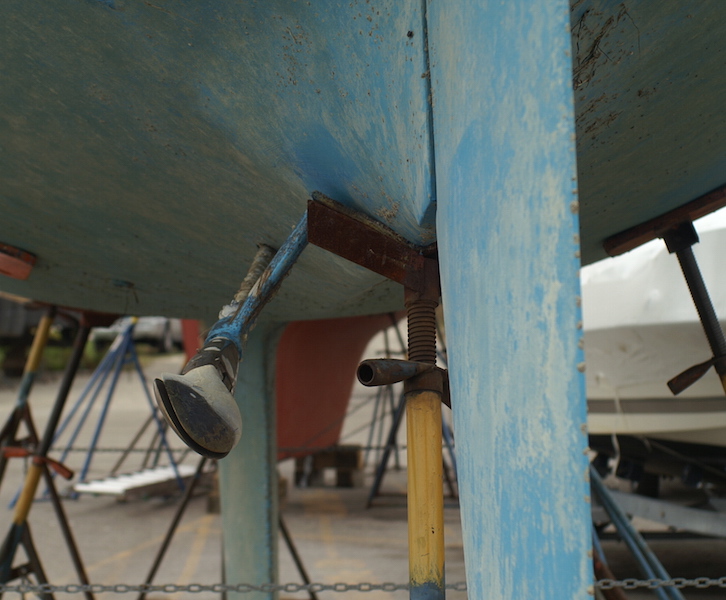 Here’s a folding prop closed, which gives an idea of how little drag they create drag under sail. They do not perform so well when motoring. Here the prop shaft is offset to one side, which is unusual. Offset installations are often seen on old boats originally designed to carry no engine, and in some more modern designs, as here, where an engine is hard to fit in

Feathering props have more complicated gearing in that each individual blade engages a universal bevel gear mounted directly on the propeller shaft inside the propeller hub. When the shaft turns one way, the gear flips the blades open in one direction; when it turns the other way, the blades open in the opposite direction. As a result, these propellers perform just as well in reverse as they do going forward, which is not true of fixed or folding props and is a big advantage when maneuvering in close quarters. When the shaft is not turning the blades pivot freely and align with the water flow, thus minimizing their profile and reducing drag. Props with flat blades present cleaner profiles when feathered, but are not as efficient under power; the reverse is true of those with cambered blades. 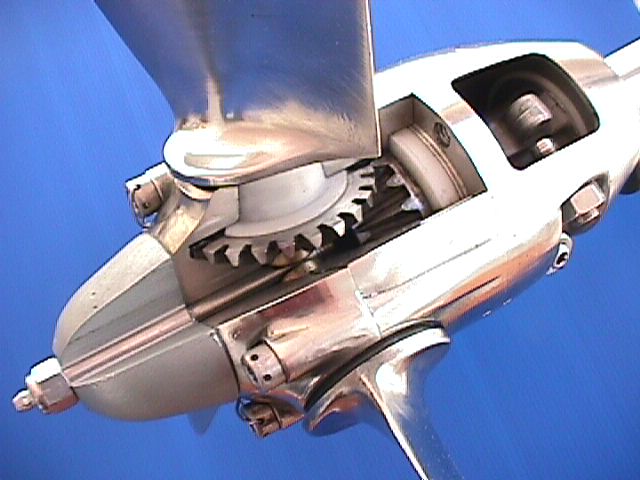 Interior view of a feathering prop. The blades here are flat, not cambered

One useful feature on any feathering propeller is that its pitch can be altered. Pitch is technically defined as the distance a propeller is driven forward with each revolution it makes, which in turn is a function of the angle at which a propeller’s blades are canted. On most props this angle is fixed, but on feathering props it can be changed by adjusting the stops that limit the pivoting of the blades in either direction. This makes the propeller much more versatile, as its pitch can be adjusted to fine-tune the prop’s efficiency at different average running speeds or even to accommodate different engines and/or transmissions. On many older feathering props you must dismantle the hub to change the stop positions, but on some newer ones adjustments can be made externally without taking anything apart. In some cases you can even set different pitches for forward and reverse, which is useful, as you normally maneuver backward only at slow speeds. 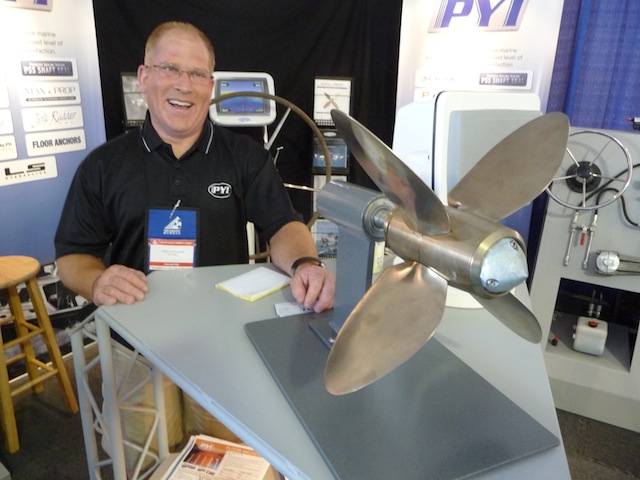 PYI’s Fred Hutchinson with a Max-Prop Ecowind feathering propeller. A spring in the hub automatically varies the pitch of the blades as the load on the blades changes. The fourth blade also increases its efficiency

There are also a few propellers whose pitch can be altered while they are turning. When used properly these controllable-pitch props are maximally efficient, because the blade angles can always be matched to the shaft rpm when motoring, or feathered flat when sailing. There are also a couple of very sophisticated feathering propellers that automatically adjust their pitch according to variations in shaft speed and blade loading without any input from the user. These sound ideal, of course, but are also very expensive. But if you are a cruiser who motors a lot, they might well be worth the money.