This, thank God, is a solo MOB tale with a totally happy ending. David Thompson, a retired engineer, was swept off his 49-foot ketch Enthalpy II (see photo up top) by a wave while sailing solo down the north coast of Puerto Rico this past Sunday. He was attached to the boat with a lifejacket/harness, but a second wave stripped him out of his harness, and out of his pants, and he was left to drift half-naked as his boat sailed away from him. After seven hours in the water he managed to swim ashore at Isabela, about 15 miles west of Camuy where he went over the side, and is now recovering in a hospital. The Coast Guard, meanwhile, managed to recover Enthalpy II in the Mona Passage, some 80 miles west of Camuy, thanks to her AIS transponder.

David, without doubt, is a very lucky man. He gets to keep living, and he gets his boat back! His tale also vividly illustrates some points we discussed recently regarding the advantages and disadvantages of wearing a harness and tether while sailing.

Take a look at Enthalpy II in that photo up there. Very tall topsides. There is what appears to be some sort of a fixed boarding ladder aft, but it ends well clear of the water. 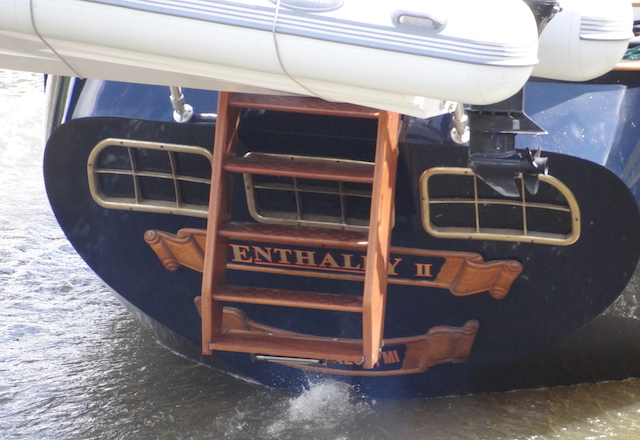 Detail shot of the boarding ladder. This looks like it is intended to be used when boarding the boat from a tender, not from the water

If David had not been stripped out of his harness, do you think he would have been able to climb back aboard unassisted while the boat was ripping along in what was reported to be a 20-knot breeze? Maybe he could have climbed that ladder if he was really strong and adrenalized. Maybe not. And we don’t know if he was in range of the ladder while dangling from his tether. If he wasn’t, he would have had to somehow get free to get to it. I’d say unless he had some better solo boarding system rigged up and/or some remote system for stalling the boat, his chances of clambering aboard were small. 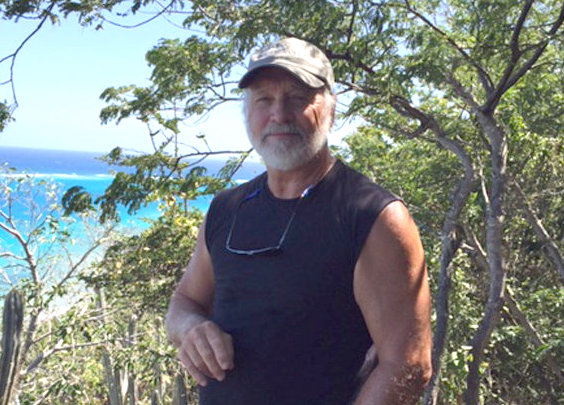 David Thompson prior to his ordeal

David’s situation raises two other questions in my mind. Did his lifejacket inflate? I don’t see how this would have helped him getting back aboard if it had. Also, did his harness have a crotch strap? I’m guessing he didn’t have one, though you never know; a wave capable of stripping his pants off might have been able to overcome a crotch strap too. Assuming he didn’t have a strap, I’d say it was the lack of a strap and that second wave that saved his life.

Major lessons learned: a) it is always best to stay onboard in the first place; b) if you do fall off the boat, you need a reliable system for getting back aboard; c) if you are wearing harness when you go overboard, you need to be able to get out of it while its tether is heavily loaded; and d) it is always good to be lucky!