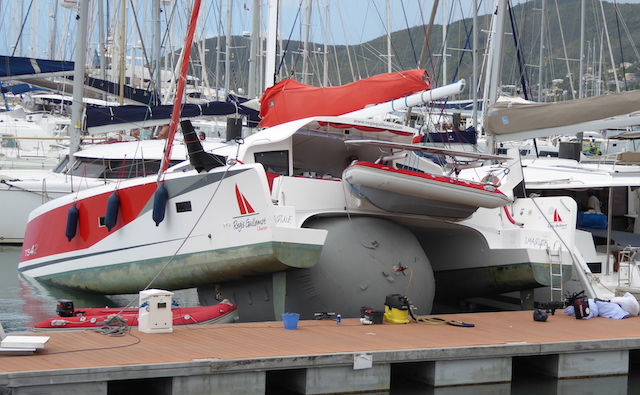 Phase Two my OPB (Other People’s Boats) cruising season (completed this past Saturday) began at the Dream Yacht Charter base in Le Marin on Martinique, where I encountered a few random nautical oddities, including this very interesting technique, employed by a rival charter outfit, for hauling out a catamaran without actually hauling it out. Is this freaking ingenious, or what?

All you need to try this at home is a super-huge inflatable fender and a small Shopvac. While studying this scene I was of course pondering the various things that might go wrong. For example: giant fender suddenly pops out from under boat (you can see there is a light retaining line taken to a winch that presumably is intended to prevent this, but I doubt it would actually be up to the job). Or even better: malicious stranger walks by and stabs giant fender with a knife. 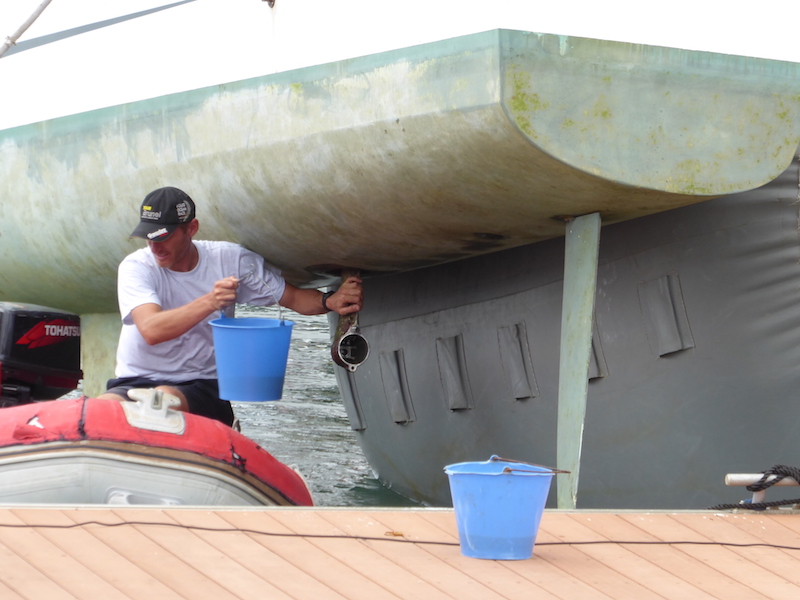 The point of the exercise: servicing a sail-drive leg. Wouldn’t want to be under there when that stranger with the knife walks by 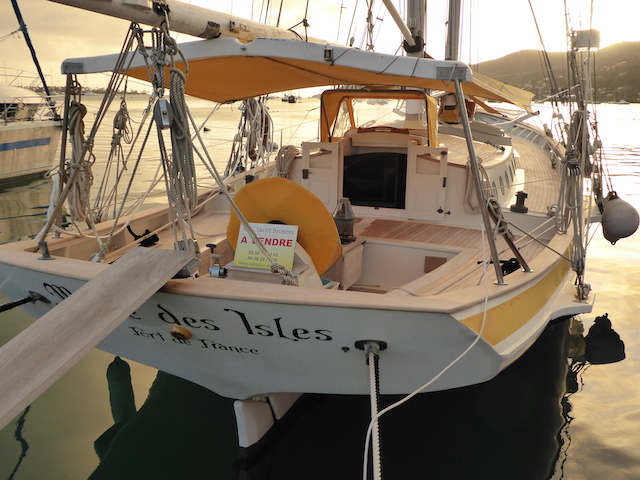 Some further dock-walking around the two marinas that make up the Marin waterfront also led me to this exquisite wooden vessel, which is for sale in case you’re interested. She’s 65 feet long, built in 2007, at a competitive price (well under $300K U.S.). That sexy concave coachroof, IMHO, is absolutely to die for, and she also carries a couple of yardarms on her foremast, in case you’re jonesing to fly some square sails when sailing downwind 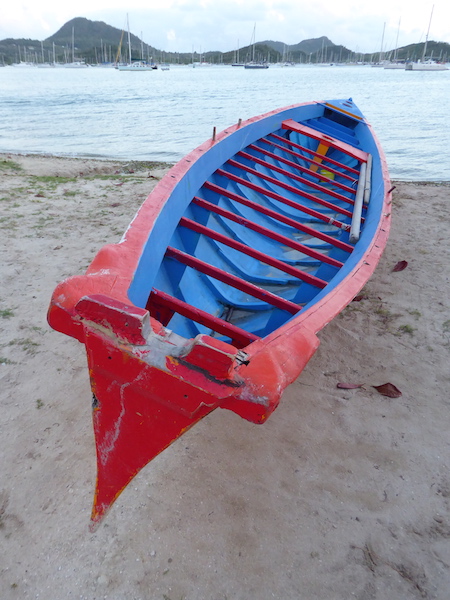 On a nearby beach I also found this very slender craft, which is a traditional yole hull from the local racing fleet 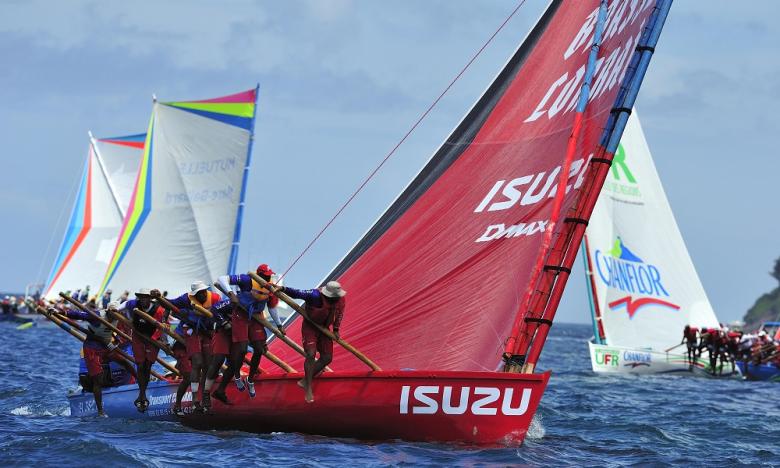 This is what yole racing looks like with sails flying. The boats are tremendously over-canvassed, with huge square sprit-sails supported by heavy spars crudely hewn from trees. Steering is accomplished with an oar instead of a rudder, and you obviously need to be in pretty good shape to be hiking out on those poles. Evidently there is also a fierce party scene associated with these competitions. In a bookstore I found a local yole racing magazine, and it was filled mostly with pix of happy drunk people and scantily clad women

Of course I didn’t come to Martinique just to schlep around gawking at OPBs. The whole point was to go out sailing on one. My bride and I consulted on where we might go during our one-week charter (we were sailing sans children) and quickly dismissed the notion of cruising to a neighboring island (either Dominica to the north, where I had just come from, or St. Lucia to the south, which we had both visited before). The whole point was to check out Martinique, which neither of us had visited before, and it seemed a circumnavigation would be the best way to do this.

Given the orientation of the island and the prevailing easterly trade-winds, it was clear a counter-clockwise circuit was the way to go. Our first big hop was from Le Marin, in the bay at the southernmost end of the west coast, around to Havre du Robert in the middle of the windward eastern coast. One very nice thing about Martinique is that the windward shore has lots of features, which makes it more accessible than on many Caribbean islands. This map doesn’t show the extensive reef system that protects most of the bays and inlets on the east coast from the westward-running Atlantic seas. Many of these are too small and dicey for a bareboat charter company to sanction as destinations, but Dream Yacht was more than happy to have us stop in at Havre du Robert, which has an easy entrance and lots of great places to anchor inside 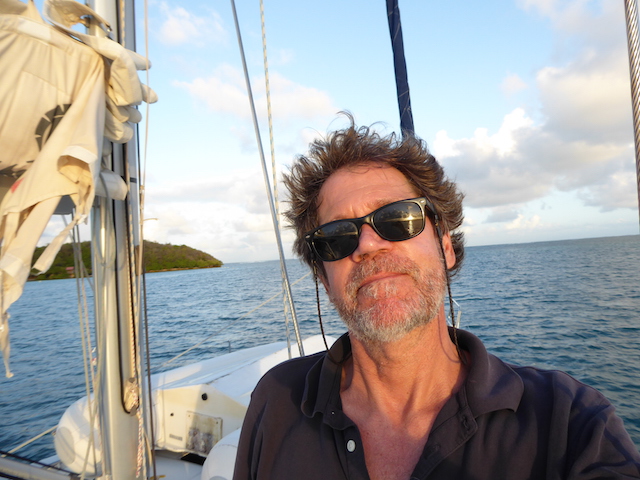 Yours truly in his favorite type of anchorage. We dropped the hook in the outermost pocket on the south shore of Havre du Robert, just off Pointe Larose, and were the only boat in sight. Nothing but sweet privacy, flat water, and the roar of surf breaking on the reef in front of us 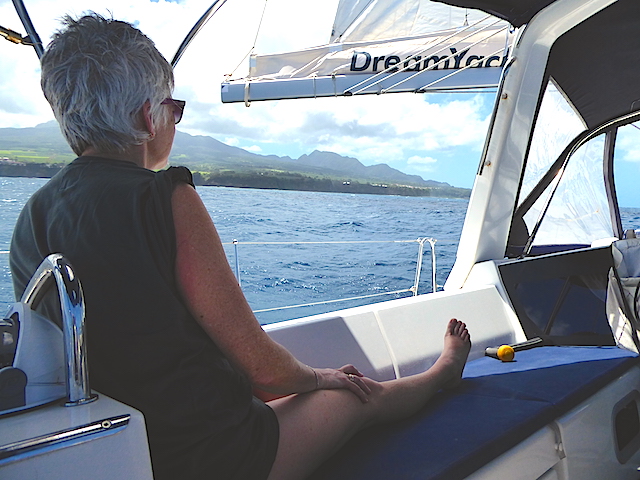 The next day we made another big hop, from Havre du Robert all the way around the island’s north end to the town of Saint Pierre. For much of this leg we were running deep downwind angles under just the mainsail, as we had no way to pole out the jib, a universal problem on bareboats. Here you see Clare enjoying a view of the mountainous northeast coast as we roll along in the offshore swell 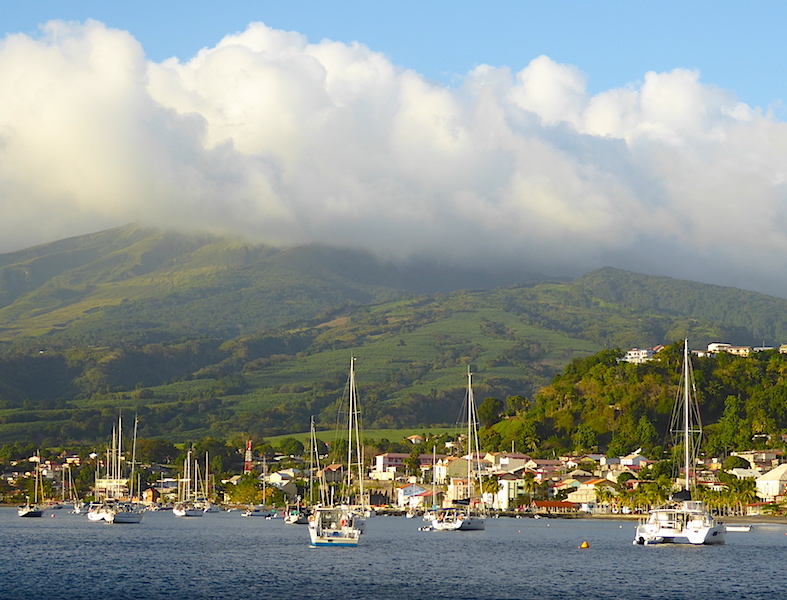 The anchorage off Saint Pierre with the island’s highest peak, the volcanic Mount Pelée, shrouded in clouds behind it. Through most of the island’s history Saint Pierre was the capital of Martinique and thus an important commercial center, as Martinique was home to many of the Caribbean’s most profitable sugar plantations. (Indeed, Martinique during the 18th century was so very valuable that the French traded all of Canada to get it and Guadeloupe back from the British after the Seven Years War.) Known as the Paris of the Caribbean, Saint Pierre was totally destroyed on May 8, 1902, when Mount Pelée violently erupted. Anchoring here is actually a bit tricky, as the bottom contour is incredibly steep. There is only a narrow band of water shallow enough for yachts to anchor in quite close to shore, and just outside that band there are numerous submerged wrecks of ships that were destroyed in the 1902 eruption 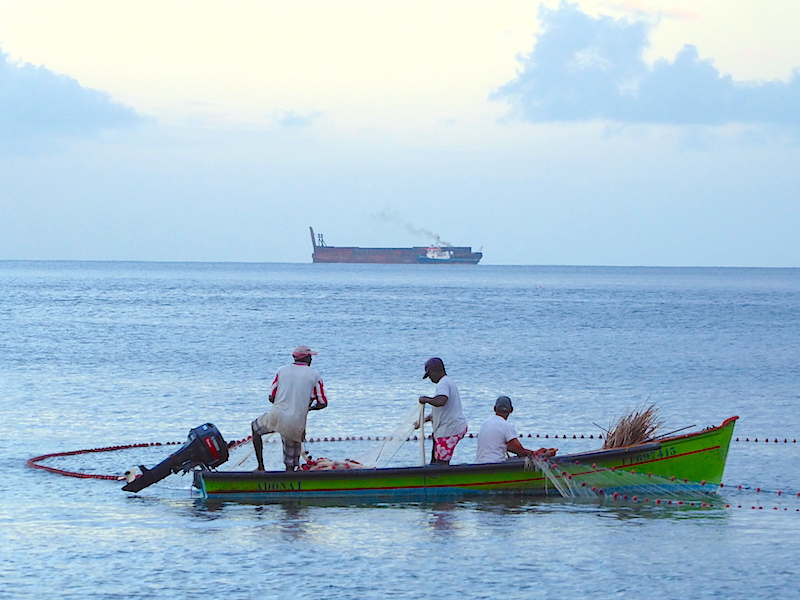 The morning after our arrival at Saint Pierre several small boats came out to fish in and amongst the anchored yachts. Note the bundle of dried grass in the bow of this boat. Before setting their net, the crew pottered about casting handfuls of torn-up grass on the water in all directions. Presumably this was done to attract fish. It didn’t seem to work, however, as this net cast, like all the others I saw that morning, yielded no fish 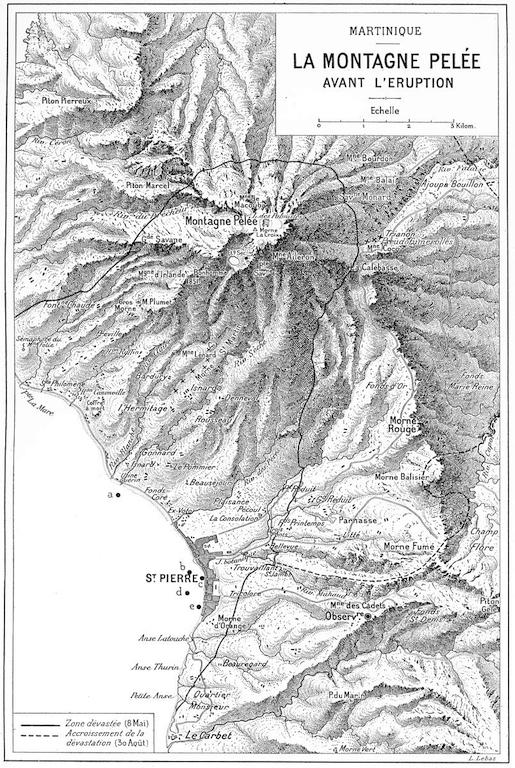 This 1902 map shows the “devastation zone” of the famous May 8 eruption (demarked by the solid black line). The eruption actually did not come as a surprise, as there was a good deal of activity in the two previous years, which most people apparently just ignored. In the days just before the major eruption the volcano was incredibly active, producing multiple clouds of ash and smoke and minor earthquakes, but still there more people fleeing into the town than out of it. The May 8 event was extremely catastrophic and featured a fluid mass of gas and rock fragments heated to nearly 2,000 degrees Fahrenheit that engulfed the town in under a minute and instantly set everything on fire. Almost the entire population of over 30,000 souls was immediately killed 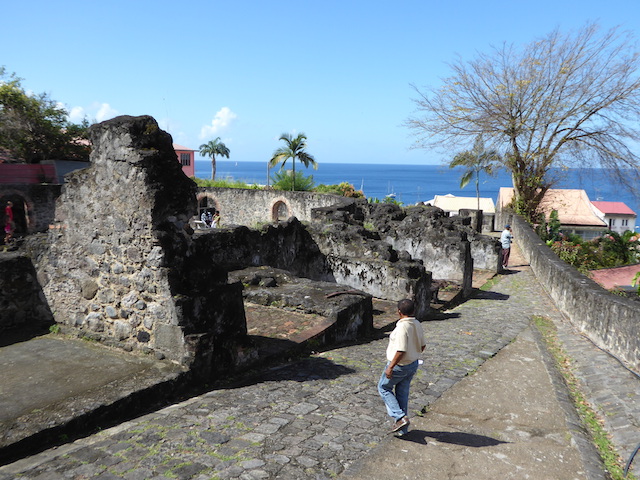 These are the ruins of the town’s once opulent theater 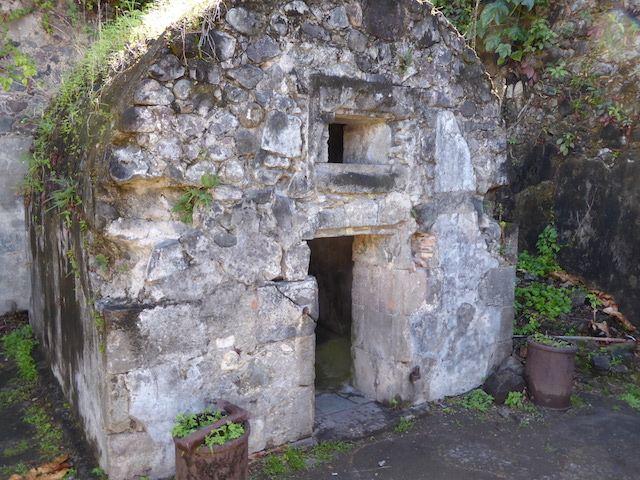 Next door to the theater you’ll find the ruins of the prison. The inhabitant of this miserable dungeon hut here, Louise-August Cyparis, was afterwards hailed as the only person to have survived the eruption, though this wasn’t strictly true 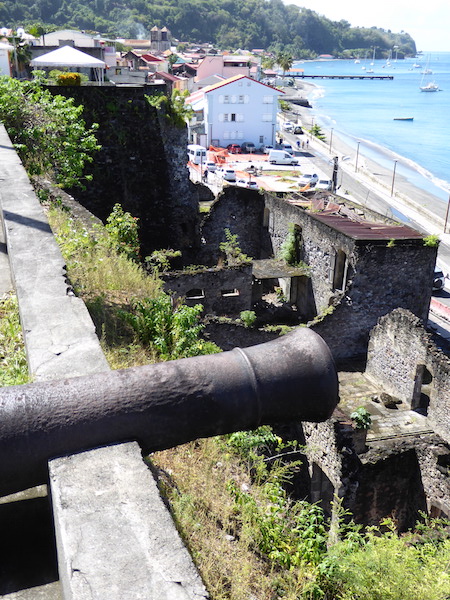 This shot gives a good idea of how the current town, which has a population of only about 4,000, has been rebuilt in and around the scenic ruins of the old town 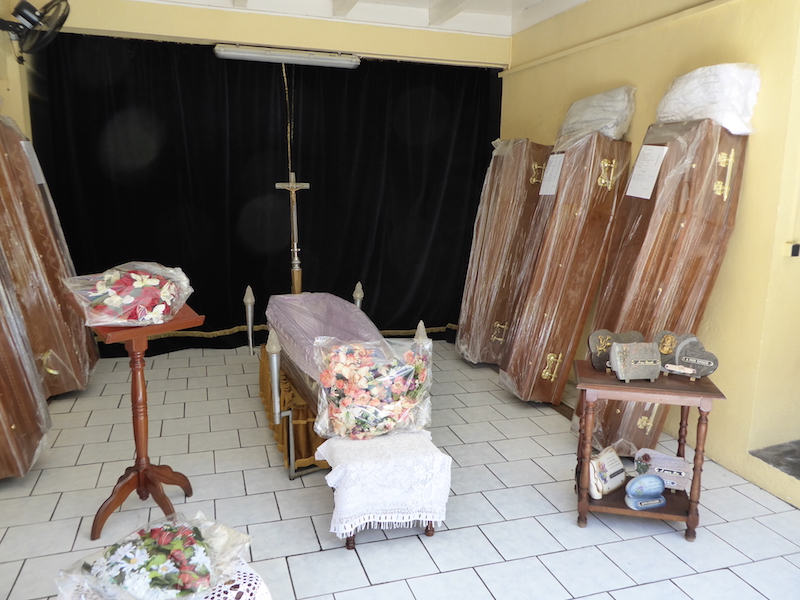 Just in case it happens again, this coffin store downtown is ready to do business 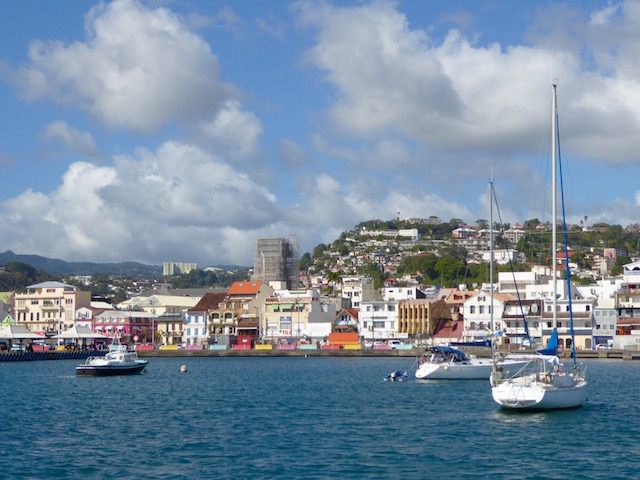 From Saint Pierre we motorsailed a short distance south through intermittent calms and sudden katabatic gusts to the current capital of Fort de France, whose waterfront you see here. You’ll note one high-rise under construction in the middle of town. There are two other just completed towers to the left outside this photo frame. With a population of over 100,000, this is the biggest town in the Lesser Antilles 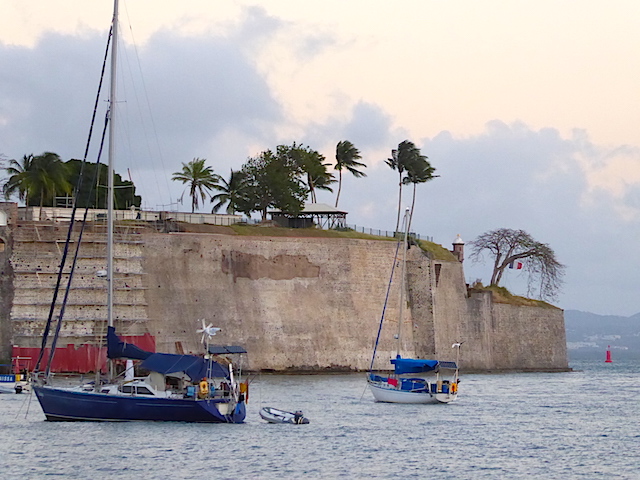 The fort itself, just east of the main town, is enormous and is still an active French military base. The little boat you see here on the right is the famous Alberg 30 Jean du Sud, which belongs to Yves Gelinas of Quebec, inventor of the Cap Horn windvane. Yves tried to sail this boat non-stop around the world via the southern capes back in the 1970s. He ended up having to make just one stop after he lost his rig. I kept my eyes peeled the entire time we were anchored here, but unfortunately never spotted him 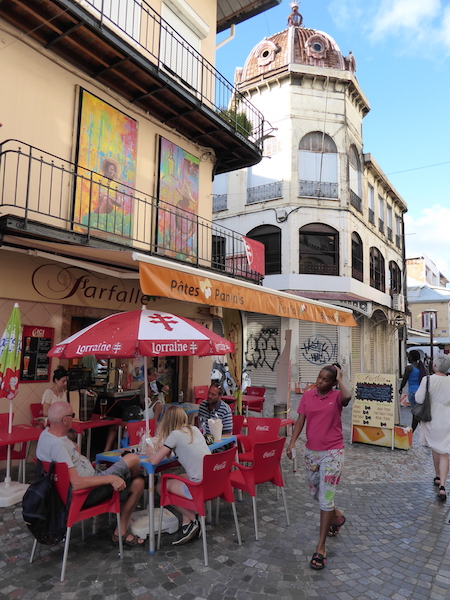 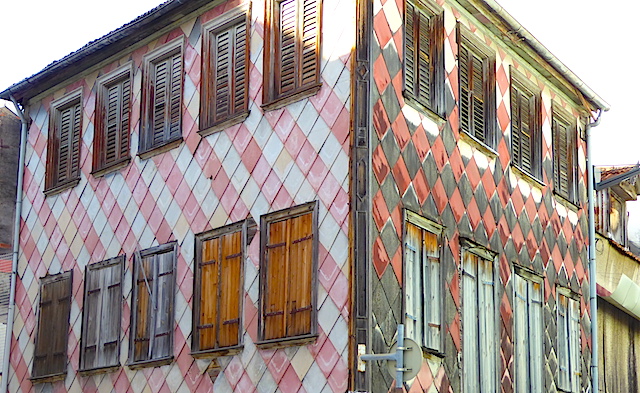 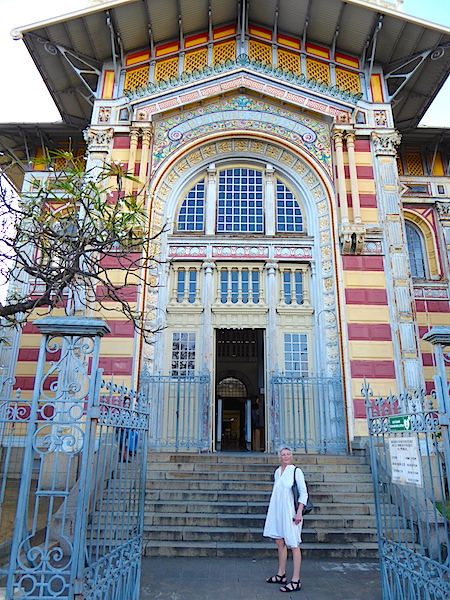 This was the most amazing building we found, the Schoelcher Library, which was actually built in France in 1889 and was shipped in pieces to Martinique, where it was assembled as a monument to Victor Schoelcher, a prominent French abolitionist 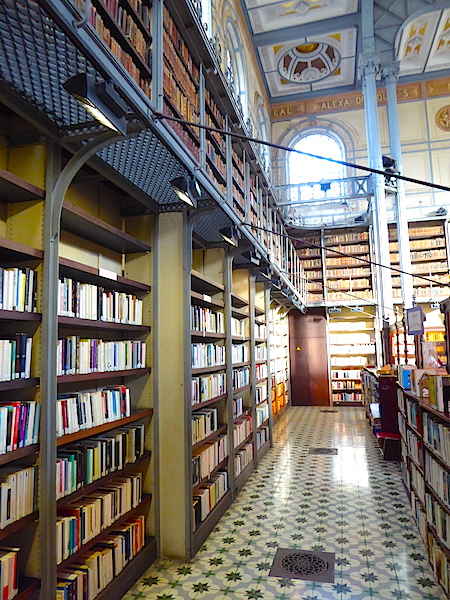 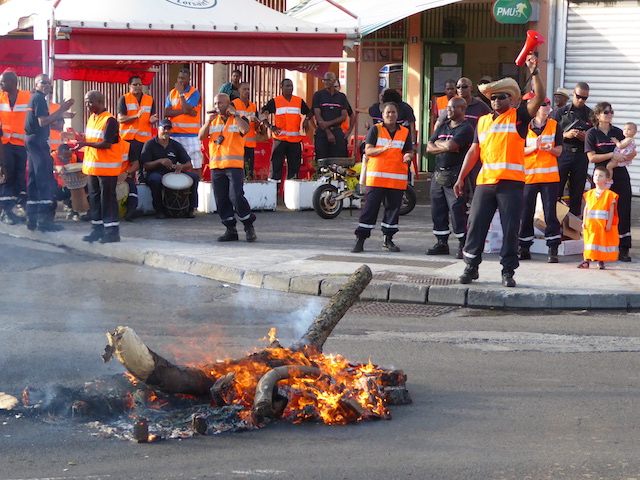 We also found these striking firefighters, who were playing music and making a ruckus and burning stuff in the street so as to gain some respect 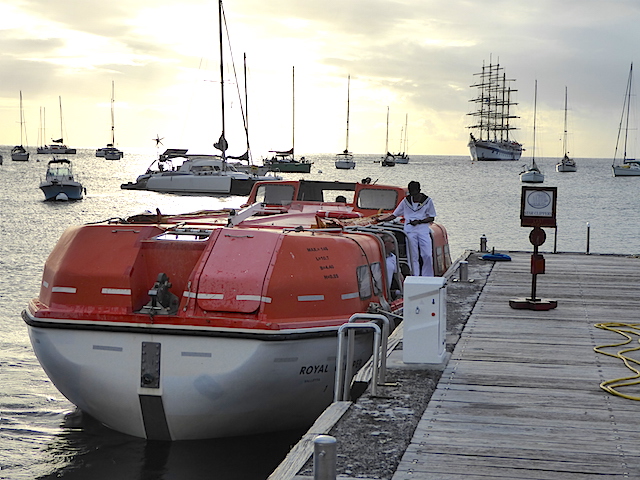 Our last stop before heading back into Le Marin was at Grand Anse, a very pleasant but quite crowded anchorage we had to share with a square-rigged cruise ship 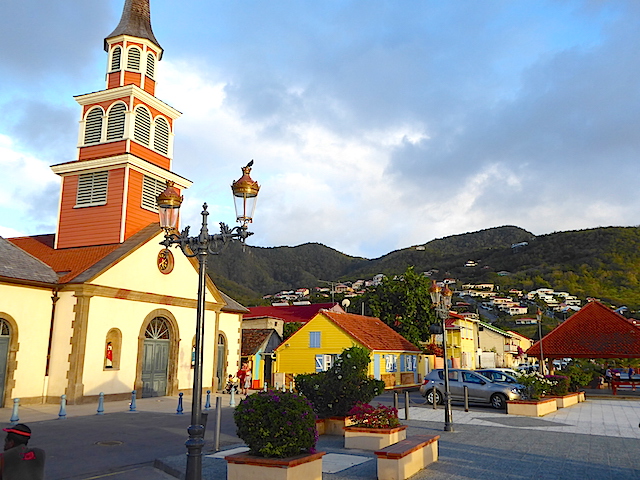 To escape the cruise-ship horde we hiked a short distance over to L’Anse d’Arlet, a charming little village with a much less popular anchorage (due to the incoming southerly swell) 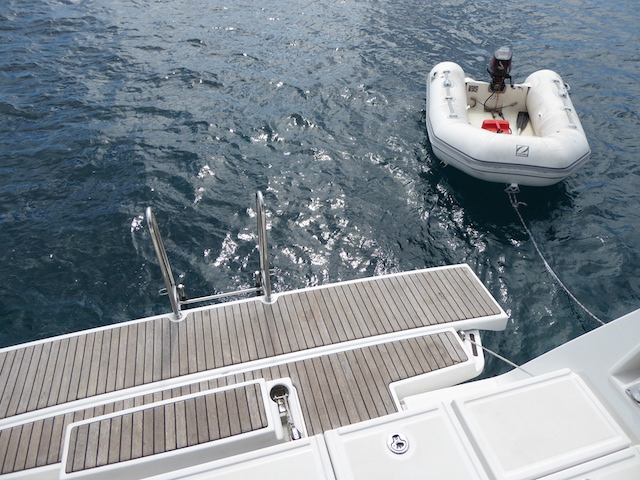 Equipment Note: The boat we chartered for this little jaunt was a recent Beneteau Oceanis 41 with one of those increasingly popular fold-down transoms that turn the back of your boat into a veritable beach. I have often seen these at boat shows, but I never before had a chance to cruise with one. I did not particularly like it. It was very nice when swimming off the boat, but with both of us standing on it it felt fragile and prone to perhaps break apart. When it came to boarding the tender and vice versa I found it less handy than a regular scoop transom, where you usually have more things to grab hold of as you move between tender and mothership. The biggest pain was having to unfold and fold the damn thing every time we arrived and left somewhere. The original electric motor for raising and lowering it had long since failed and been removed and had been replaced with a cumbersome line-and-tackle rig that ran the length of the cockpit. Also, the folding beach obstructed access to the liferaft compartment in the boat’s transom. To easily launch the raft you would first need to deploy the beach, which in violent conditions might well be a big problem.

Bottom line: these trendy widgets are OK to have on a charter boat, but I would not want one on a boat I owned.