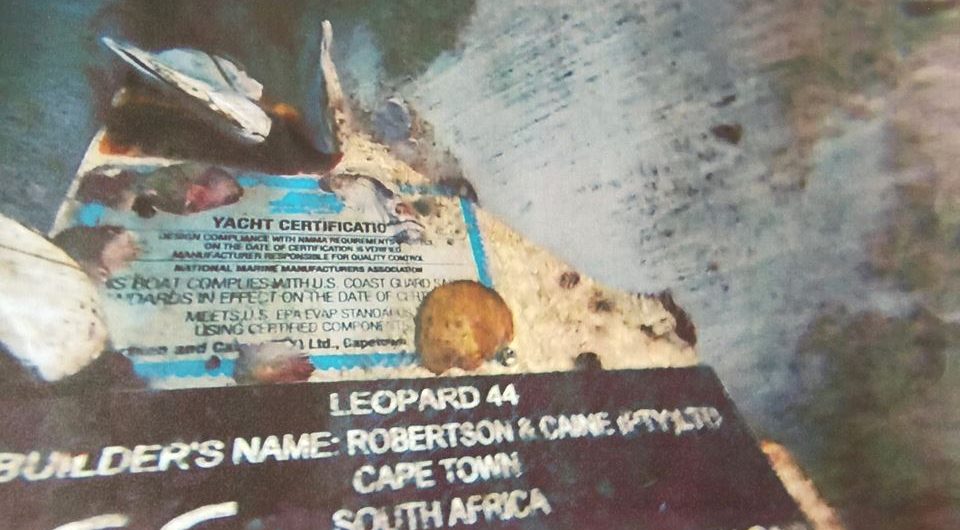 This is getting increasingly intense. The overturned Leopard 44 catamaran that set out from South Africa on a routine delivery and was lost in the Indian Ocean over a year ago, then miraculously reappeared upside down off South Africa just last month, was taken in tow, and then lost again, still has not been rediscovered. Unfortunately. Meanwhile, Sunsail, the boat’s owner, and the families of the missing crew members have today released separate statements that are decidedly at odds. At this point I am not prepared to comment on this conflict. You can read the statements yourself and draw your own conclusions. The image up top is the photo referenced in the Sunsail statement.

First, this is what Sunsail had to say:

Sunsail carried out an air search on Friday, 29th January with an independent observer on board the search aircraft but unfortunately the search was unsuccessful and the vessel was not sighted. Subject to suitable weather conditions, Sunsail will be carrying out a further air search today (1 February) for the overturned yacht.

It would appear that one of the NSRI divers took a photograph showing the manufacturers’ plate when the NSRI team originally located the vessel. The plate appears to identify the vessel as the missing Sunsail RC044-978, however, Sunsail has not yet received any formal validation and is touch with the NSRI divers who took the photographs in order to try and confirm identification.

Sunsail’s team in Cape Town are continuing to liaise with the local authorities.

Sunsail has received a request to meet with the families and is happy to organise a private meeting with them, either individually or as a group, however at the present time the management of Sunsail are focussed on trying to locate the vessel and so it would prefer that any such meeting take place at a later date.

And this is what the families released at a unique web address with a provocative name (bloodonthehulls.com):

Statement on behalf of:

We, the families of Anthony Murray, Reginald Robertson and Jaryd Payne, are plunged back into a state of utter distress at news that Moorings A5130 is again lost at sea.

When our lawyers informed us on January 18th that an upturned hull had been sighted by the Brazilian Naval vessel Amazonas 78nm off Cape Recife (near Port Elizabeth) we were stunned.

The last contact with our loved ones on their journey, from Cape Town to Phuket, Thailand, to deliver a catamaran was on January 18th 2015. Her position at that time was 26.00S 080.09E. To have her now appear so close to home and with the answers to what happened possibly within our reach, lifted our collective spirit. That it happened exactly a year to the day after the last contact with the catamaran was incredible to us.

Although (agonisingly) only told of the sighting a full four days after it had been made, and also informed by the authorities that they would not be deploying any resources to locate the hull, we immediately set about doing what we could to bring the hull safely to port.

With the help of our Facebook community (Searching For Anthony, Reg & Jaryd) we got the commiment of the NSRI to go to sea and put a satellite tracker on the hull if it came within reach of any of their coastal station vessels. In addition, the families took the decision to fund two air searches, with the help of experienced search and rescue pilot, Donovan Jordaan, River Air and Sheltam Aviation – all of whom have done what they can to bring their costs down in an effort to help. These took place on January 22nd and January 23rd.

On Saturday January 23rd the NSRI informed us that another vessel had sighted the hull 42 nm off Cape Aghulas and they despatched two of their vessels to attach a satellite beacon. For this, and the images their divers captured, we will always remain grateful. After this, and with significant pressure from ourselves and our community, SAMSA authorised the tug Peridot to do the salvage early that evening.

For reasons that we don’t fully understand, and which add to our ongoing pain and suffering, the tug lost the hull during the journey back to port and it has not been seen or found since.

We now have certainty that the hull is that of Moorings A5130, the Leopard 44 catamaran that our men were delivering to Thailand where it would become part of Sunsail’s leisure fleet. This has come through underwater images captured by the NSRI divers on January 23rd which include the yacht’s identitifcation as a “Leopard 44” and the builder’s name, “Robertson & Caine (PTY) LTD, Cape Town, South Africa”. These images show that the catamaran has drifted thousands and thousands of kilometres to come home.

Throughout this whole nightmare, we have been supported and helped in ways that we never thought possible. Over just the past few days, a Cape Town pilot has donated hours of flying over the potential new area of drift in search of the hull.

This support by individuals – friends, family, strangers – and organisations has played no small part in helping us get through an unimaginably traumatic year.

We are saddened to say that Sunsail/Tui Group has not been among these.

We learnt through our lawyers, as well as press statements issued by Sunsail UK, that representatives of the Tui Group are in Cape Town. They flew in from the USA and other territories to “meet the vessel”.

Since the start of this latest sighting, we have asked repeatedly to meet with these representatives.

On Saturday January 30th our lawyers were informed that Sunsail/Tui Group does not beieve that it will “serve any purpose” to meet with us.

This goes directly against an official Sunsail press release dated 25 January 2016 that states, “any news will be reported first to the families and we will respect their wishes in terms of next steps. It remains a priority for Sunsail to find out what happened to the missing crew and boat.”

Although distressed and deeply angry at this, we are not surprised at Sunsail/Tui Group’s refusal of our request.

WE implored the company for help and information when we realised we had not heard from our men in the days after January 18th 2015, only to be told that we were over-reacting. We were told that our men had encountered “a little bit of bad weather”. We were never told about their position in the path of Cyclone Bansi, which reached windspeeds of over 180 kms per hour.

WE reported the catamaran missing to the Maritime Rescue Co-ordinating Centre on February 11th and February 12th 2015. The company resisted this most fundamental of nautical codes – although, since then, WE have had to repeatedly request Sunsail/Tui Group not to misrepresent this fact.

WE created the Facebook community that has grown to nearly 5000 individuals who have assisted in the search for our men and then the hull over the past year.

WE are the ones who live with the knowledge that, had any or all of our men, survived the events of January 18th, they were denied the chance of rescue because a multi-billion dollar global company chose not to alert the maritime safety authorities when scheduled report-ins were missed. Authorities told us that losing contact with a vessel at a time of severe weather warrants the issuing of a situation of “uncertain distress” by maritime safety authorities, should they be made aware of the situation.

And so much more.

Our anguished queries to Sunsail/Tui Group have always been reasonable and respectful and directed only towards finding our men and the catamaran.

For reasons we have NEVER understood, we have been treated as adversaries. We still remain shocked at Sunsail/Tui Group’s decision to arrive at a MRCC family briefing with a team of lawyers in April 2015, which directly led to the three families having to do the same – something we would not have chosen and thereby adding to our financial costs.

Since then, we have been met by systematic corporate and legal bullying – this from a group whose 2014/2015 turnover growth grew to 20.01 billion euros. Instead of those wanting to join in discovering what happened to our men and the yacht, Sunsail/Tui Group have dispatched lawyers and executives who see no “purpose” in meeting with us.

We have have lost jobs and income. Our families have felt the impact of our collective dedication to first rescuing our loved ones and then putting every effort into the recovery of the hull after it was sighted not once, but four times. We have suffered – and we keep on suffering.

But we will not stop.

We are calling for an inquest into the incident and a full investigation.

We hereby commit to dedicate ourselves to finding, not just the answers of what happened to our loved ones, but to improving conditions, establishing fairer practices and enforcing compliance with legislation for working sailors around the world. We will do this with the single aim of making their lives safer.

We call on Sunsail/Tui Group to do right by us. They flew in to meet the hull. It mystifies the anguished human beings left behind why they simply refuse to meet with us.

I’m tacking on these images of the missing crew myself: 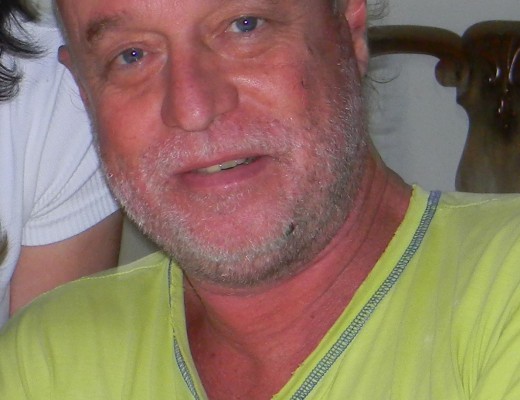 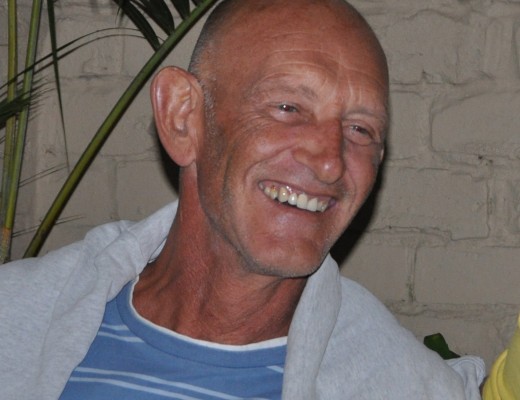 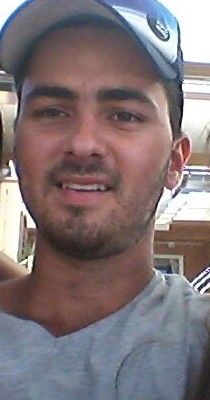 Please note: I do not know why Sunsail refers to the vessel as “Sunsail RC044-978” and why the families call it “Moorings A5130.” Both Sunsail and the Moorings belong to the same parent corporation, TUI Marine.