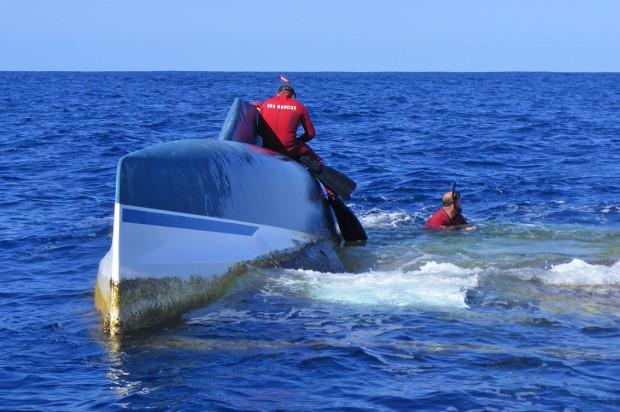 It was a little over a year ago, on December 14, 2014, that skipper Anthony Murray (58) and two crew members, Reginald Robertson (60) and Jaryd Payne (20), set out from Cape Town to deliver a new Leopard 44 catamaran into charter service in Phuket, Thailand. The un-named vessel, described variously in reports online as belonging to Sunsail or the Moorings, was last heard from via sat phone on January 18, 2015, at which time it was in some proximity to Cyclone Bansi in the Indian Ocean well west of Australia. Family members of the missing crew reported the vessel missing 10 days after it failed to arrive on schedule in Thailand in early February of last year and since then have worked tirelessly trying to figure out what happened to it. After multiple sightings of an overturned catamaran east of Mauritius and Reunion and now most recently off the South African coast, a tugboat now has what is very likely to be the missing cat in tow and is headed back to Cape Town.

The capsized cat was first spotted off South Africa by a Brazilian navy vessel on January 18, exactly a year after Murray and company were last heard from, and was boarded by a South African SAR team from the National Sea Rescue Institute (NSRI) two days ago (see image up top). They were unable to gain access to the interior, however, and could not positively identify the hulk as the missing cat, but did mark it with a satellite transponder. The South African Maritime Safety Authority (SAMSA) sent out a tug, Peridot, which reached the capsized vessel and took it in tow today.

The huge question, of course, is whether there are bodies onboard. The families evidently hoped for some time there might actually be survivors, but at this late date that seems extremely unlikely. There is some slim precedent for a very long survival drift in an overturned multihull (see Capsized, an account co-authored by Steve Callahan of four men who spent 119 days in a capsized tri), but in that case the men had easy access to the hull’s exterior. In this case it appears there is no such access.

The families have maintained a Facebook page documenting their efforts, and this is currently the best source for up-to-date information. Over the past year they also launched a crowd-sourced satellite search of the Indian Ocean through Tomnod, started a Go Fund Me drive to finance their efforts, and most recently launched a private air search to locate the vessel now in tow after it was first spotted off South Africa by the Brazilians. The families also reportedly have been disappointed by what they see as a lack of support and interest on the part of TUI Marine, the parent of both Sunsail and the Moorings.

Personally, I’m biting my fingernails waiting to see how this turns out. For more info in the meanwhile you can check out this list of search results from the Highway Mail, a South African newspaper that has followed the story closely.

UPDATE (January 29): The latest developments here truly are heartbreaking. It seems the overturned Sunsail catamaran slipped its tow en route back to Cape Town after it did some porpoising and became progressively less buoyant. The tug Peridot went into a search pattern trying to find it again, unsuccessfully, and now the families are trying to raise money for an aerial search. If you’d like to contribute, you can click on over to their Go Fund Me page.

Meanwhile, the NSRI has proffered a photograph taken when they boarded the hulk that the families claim proves this is the boat in question: 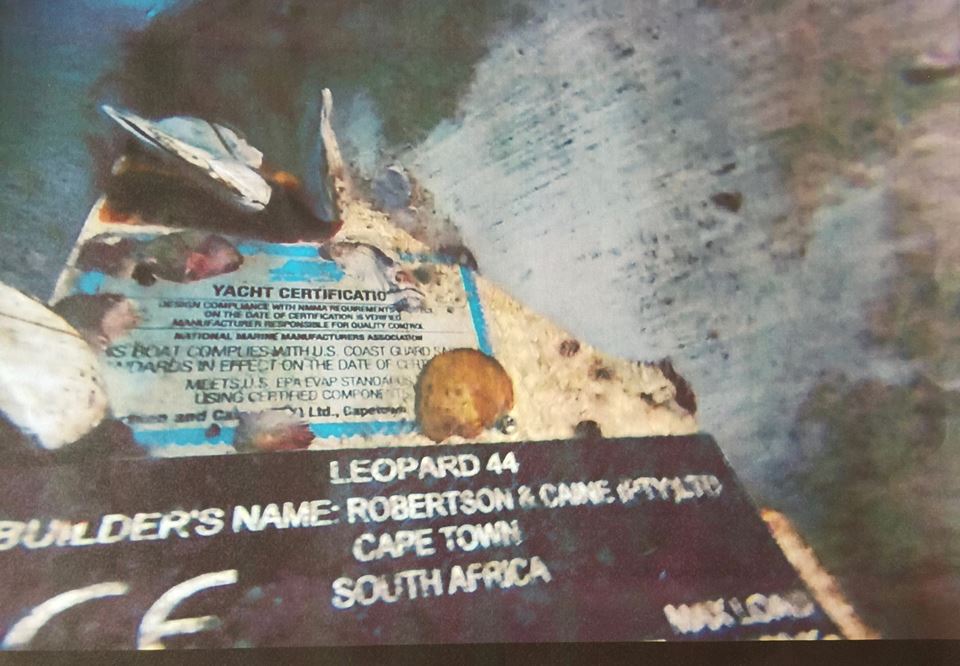 One thing I am wondering here: why were they trying to tow it all the way back to Cape Town when Port Elizabeth was so much closer? You have to figure towing an overturned swamped boat wouldn’t be easy, and that the shortest distance possible would be best.

UPDATE (January 27): I have been contacted by Sunsail, which inferentially confirms that it was one of their boats and not a Moorings boat that was lost last year. They shared the following statement (which can also be read at their site here):

Sunsail assembled an operational team at the news of the sighting on 18th January with a view to recovering the yacht and had been liaising with the relevant authorities (MRCC and SAMSA) in this regard. Subsequently the authorities took the decision that they would control the recovery procedure and dispatched the tug boat Peridot without further consultation with Sunsail. The Peridot attached the vessel and started to tow in the in direction of Cape Town. The previously referred to authorities are running the operation and we are now awaiting news of the estimated arrival time of the yacht back into Cape Town where we intend to have a Sunsail team meet the vessel.

On 18th January 2016, Sunsail received notification from MRCC that on 14th January a Brazilian navy ship had sighted an upturned vessel in the Indian Ocean, off the southern coast of South Africa. On Saturday 23rd January, the vessel was sighted again and the National Sea Rescue Institute (NSRI) Agulhas duty crew launched a sea rescue craft. On arrival, the NSRI took photographs and NSRI rescue swimmers free dived to investigate markings on the yacht and, to the extent possible, explore under the hull.

NSRI Agulhas attached a satellite tracking beacon to the casualty Catamaran which MRCC will monitor to keep track of the position while Telkom Maritime Radio Services broadcast a Maritime Navigational Warning to warn ships in the area of the navigational hazard and the tug boat Peridot operated by Smit Amandla were activated and they will attempt to tow the casualty Catamaran to an appropriate Port.

During the night NSRI Hermanus were dispatched to investigate the option of attaching a tow-line to the catamaran to pull her from shipping lanes but the effort was aborted and MRCC are tracking the casualty Catamaran until the tug Peridot arrive on the scene.”

Sunsail assembled an operational team at the news of the sighting on 18th January with a view to recovering the yacht and had been liaising with the authorities in this regard until the decision was made to dispatch the tug boat Peridot. We are now awaiting news of the recovery operation and the estimated arrival time of the yacht back into Cape Town where we intend to have a Sunsail team to meet the vessel.

Please note, any news will be reported first to the families and we will respect their wishes in terms of next steps. It remains a priority for Sunsail to find out what happened to the missing crew and boat.

0Shares
catamaransSAR
Previous PostPETER JOHNSTONE: No Longer at the Helm at GunboatNext PostLOST CHARTER CAT: Sunsail Versus Families of the Missing Crew Members