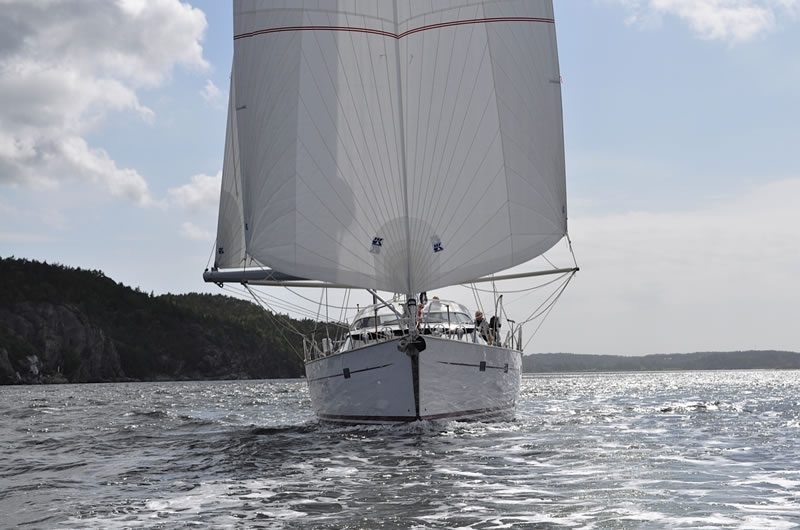 The concept of the twin-headsail rig, where two jibs are set flying side by side, was first propagated back in the 1950s by bluewater sailors who wanted an easy-to-manage rig for sailing deep downwind angles on tradewind passages. The idea has been revived of late, first by an acquaintance of mine, Iain Simpson, who updated the concept for modern roller-furling systems and employs it on his Najad 570 Song of the Ocean. He is quite keen on it and has been proselytizing on the subject for a few years now on his website.

Iain’s system, which he calls a “Simbo” or Simple Bow rig, really is simple. Instead of hoisting a single headsail up the furling rod on your headstay, you hoist two identical sails in two separate luff grooves on a single halyard. When sailing on the wind, the two sails lie one on top of the other, forming in essence a single two-ply airfoil. When sailing off the wind, you split the sails and fly them wing-and-wing on two separate whisker poles. When you don’t want to sail anymore, or if you want to reef a bit, you simply roll the two sails up together on the furling rod they share. 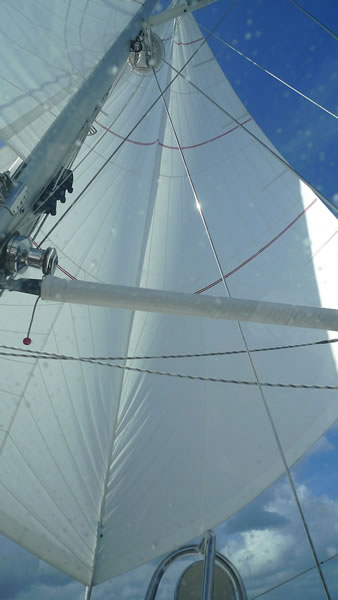 Twin headsails flying aboard Song of the Ocean

Back in the day the notion was you’d fly twin headsails on twin headstays with your mainsail doused. This way your total sail area would be perfectly balanced athwartships across the rig and by leading the two headsail sheets back to your tiller you could easily coax a boat to sail herself downwind without any special self-steering gear. In the days before Blondie Hasler invented the servo-pendulum windvane this was considered a useful trick and was the primary advantage of a twin-headsail set. 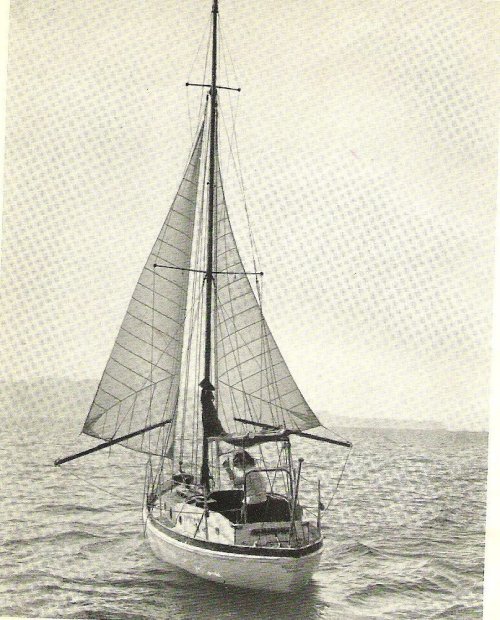 Example of a twin-headsail rig from the 1950s. Here it appears the sails have been set on their own luffs either side of the headstay. A boat under sails set like this could be easily made to steer itself, but the reduced sail area obviously also greatly reduced boatspeed

Iain likes to fly his twins downwind with the mainsail up, which obviously increases sail area quite a bit. His theory is if you trim the main to an angle of 45 degrees it will spill wind into the windward jib, which in turn will spill wind into the leeward jib, keeping all the sails full and happy. To me this sounds like convoluted reasoning, and to my mind the analogous set would be a mainsail with a symmetrical spinnaker set forward of it on a deep run. The fact that the mainsail covers half of the spinnaker doesn’t prevent the whole sail from filling with air.

However it works you can see in this video that Iain in fact has no problem keeping all sails full when running off. 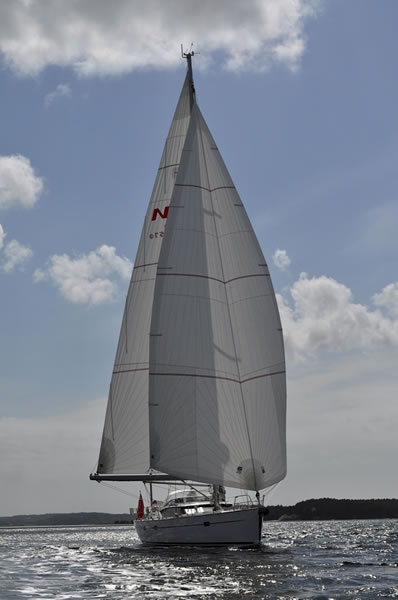 Another view of Song of the Ocean sailing under her Simbo rig. The similarity to a symmetric spinnaker is fairly evident here

Another variation on this same theme is also just now being introduced by Dutchmar (ex-Dutchman) Products. Dutchmar’s Zoom Boom goes one step further, however, and sets twin headsails on a cantilevered jib boom like those found on model sailboats. By carrying the headstay forward of a boat’s stem fitting, the rig allows for a larger 110 percent self-tacking headsail. Thanks to the boom, the sail is also self-vanging and has a better shape when reaching, as the clew is carried by the boom out to leeward. 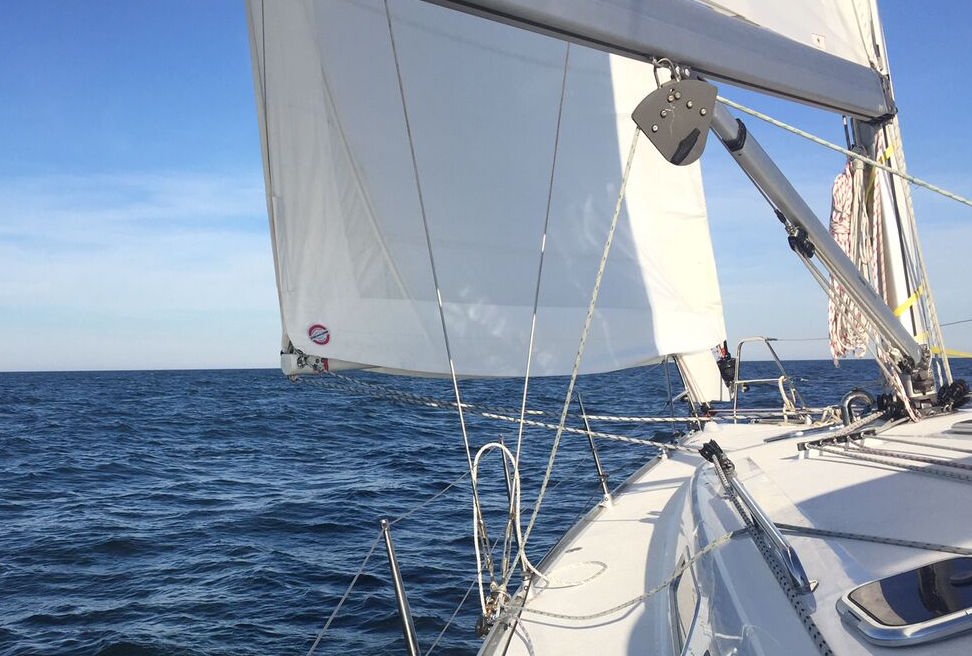 A Zoom Boom rig on a reach. The twin sails here are lying one on top of the other and act as a single airfoil

Just like Iain’s rig, the twin sails on the Zoom Boom furl together on the same headstay rod and can be split and splayed out wing-and-wing when sailing downwind. 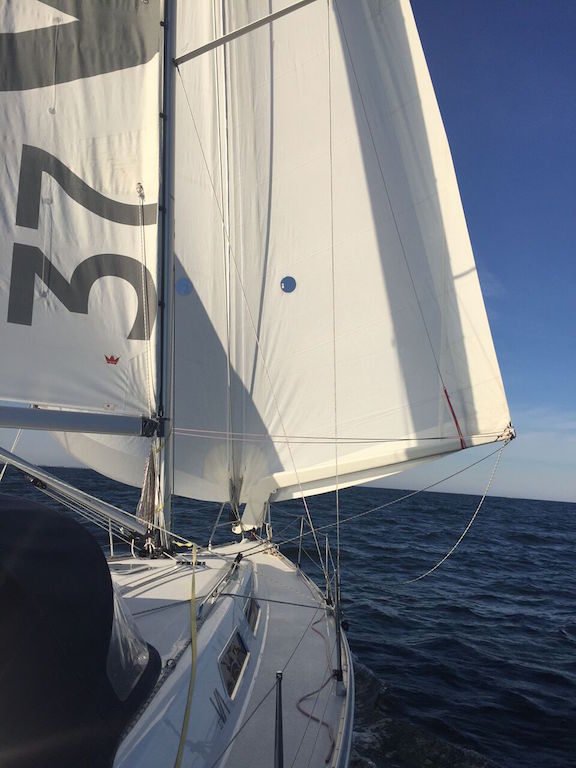 A Zoom Boom rig sailing off the wind. Unlike Iain’s rig, the jib boom serves to pole one sail out to windward while the other flies loose to leeward, just like a symmetric spinnaker 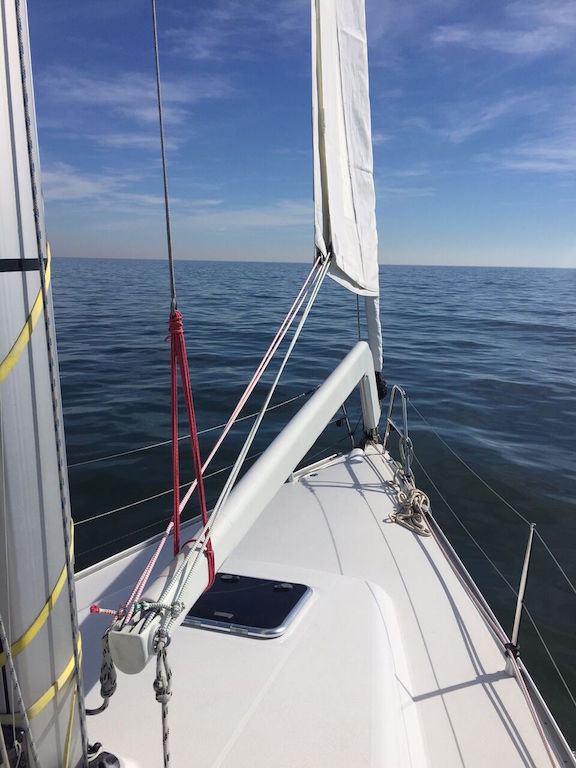 The information I have from Dutchmar suggests the Zoom Boom can be installed on boats up to 40 feet in length and that offshore sailors can also fit a second headstay to fly a storm jib on when sailing in strong conditions. The price is projected to start at $1,940, plus $120 for each foot in a rig’s J dimension.