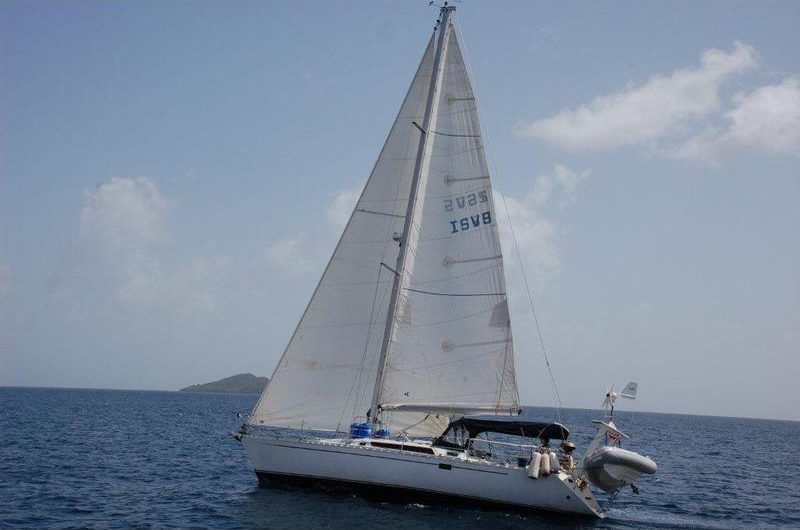 The French firm Beneteau was formed in 1884 as a builder of wooden fishing boats and switched to building fiberglass recreational vessels in 1964. They first started building sailboats in 1972 and today claim to be the largest boatbuilder in the world. Beneteau’s First series of performance cruising sailboats was introduced in 1979 and quickly blossomed to include this boat, which was branded as the First 38 because it measures 38 feet on deck, though in fact it is 40 feet long overall.

Designed by Jean Berret and introduced in 1982 the First 38 was one of the earliest sailboats to boast the popular three-stateroom layout now found on so many mass-produced monohulls. It also was one the first production boats built with a reverse scoop transom, another widely adopted feature. (The transom on the First 38 is convertible, with solid sections that can be inserted to fill in the scoop.) It is attractive and solidly built for an inexpensive mass-produced boat, an excellent value for anyone looking for a strong, fast cruising boat that can also be successfully raced (typically its PHRF rating is about 108). 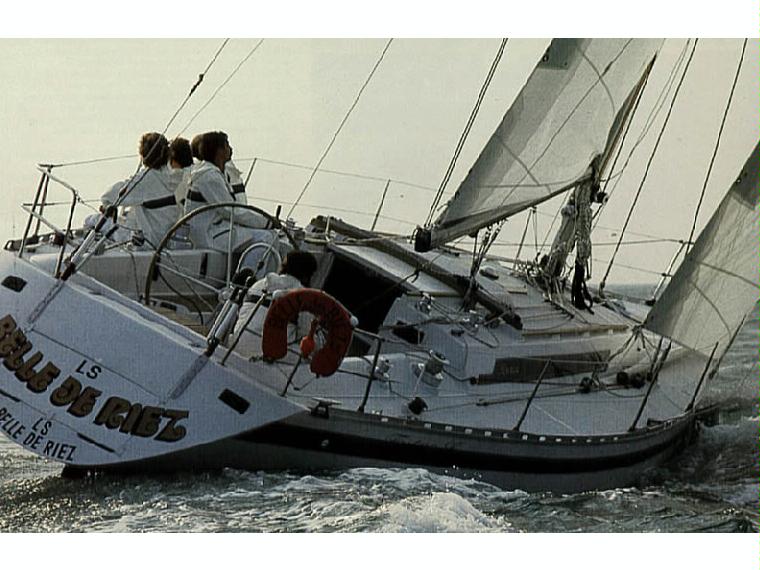 A First 38 in racing mode, with transom closed up 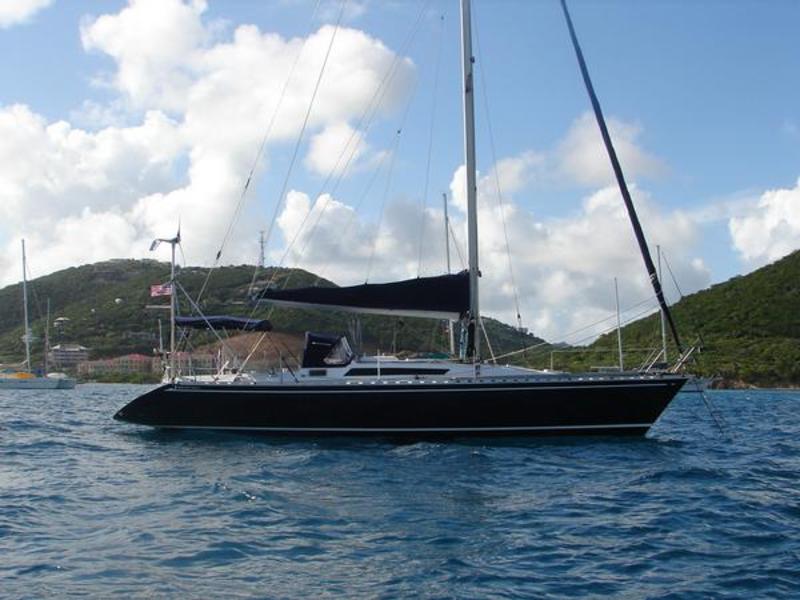 In cruising mode, with a bimini, a dodger, a wind generator, and a sail bag on the boom. The boat has a very attractive profile

Like all Beneteaus, the First 38 had a relatively short production run, from 1982 to 1985, but during that time over 200 hulls were built, several of which were exported to both coasts of North America. In 1986 much of the tooling for the First 38 was used by Beneteau to create the First 405, which has a different interior (just two staterooms instead of three), a deeper keel and more ballast, and is finished to a slightly higher standard.

Unlike many contemporary cruising boats that have very wide aft sections and thus have a strong tendency to round up when sailing to windward, the First 38 has a more balanced shape with a tapered stern and handles well on all points of sail. Owners describe the boat as being very closewinded, with less of a tendency to pound hard going to weather in a seaway compared to more modern performance boats that have flat bilges forward. The boat can do better than 7 knots sailing upwind in moderate conditions and will surf downwind when pressed, reportedly achieving top speeds in excess of 13 knots. The First 38 also tracks well and its helm is light and balanced in most conditions. Average runs sailing offshore on extended passages are said to be between 150 to 170 miles per day.

Structurally the First 38 is significantly stronger than many mass-produced boats built today. The hull is solid fiberglass laminate stiffened with a large pan incorporating a structural grid that is firmly glassed to the hull. The pan is quite shallow, thus does not limit access to most of the hull above the bilge, and features several access ports so most of the bilge can be reached, too. Bulkheads are glassed along their entire perimeter to both the hull and the deck and are also bolted to the floor pan.

The deck joint is simple and solid–bonded with sealant and through-bolted. The deck is balsa-cored for stiffness, with solid laminate underneath hardware. There are also raised bosses under key fixtures, such as the chainplate covers amidships and the big genoa sheet turning blocks aft, to shed water that might otherwise try to wriggle its way below. The ballast is cast iron externally mounted on stainless-steel keel bolts.

One thing to watch out for are osmotic blisters. Like many fiberglass boats built during the 1980s, the First 38 has had more than its fair share of these. In many cases repairs have been made at Beneteau’s expense; in some cases, however, multiple repairs have been needed.
For a vessel of its size the First 38 can theoretically sleep an enormous number of people. Originally there were narrow pilot berths either side of the saloon, and these, plus the two settees, plus the double berths in the three staterooms make it possible to cram in as many as 10 slumbering bodies. The V-berth forward, however, is quite narrow at its foot, as are the pilot berths, and the doubles in the aft staterooms are a tight fit for two. This isn’t a problem during a short distance race, but cruisers, particularly liveaboards, will probably be happier keeping the body count down to four or five. Indeed, the layout is nearly perfect for families with children who want to cruise for long periods. 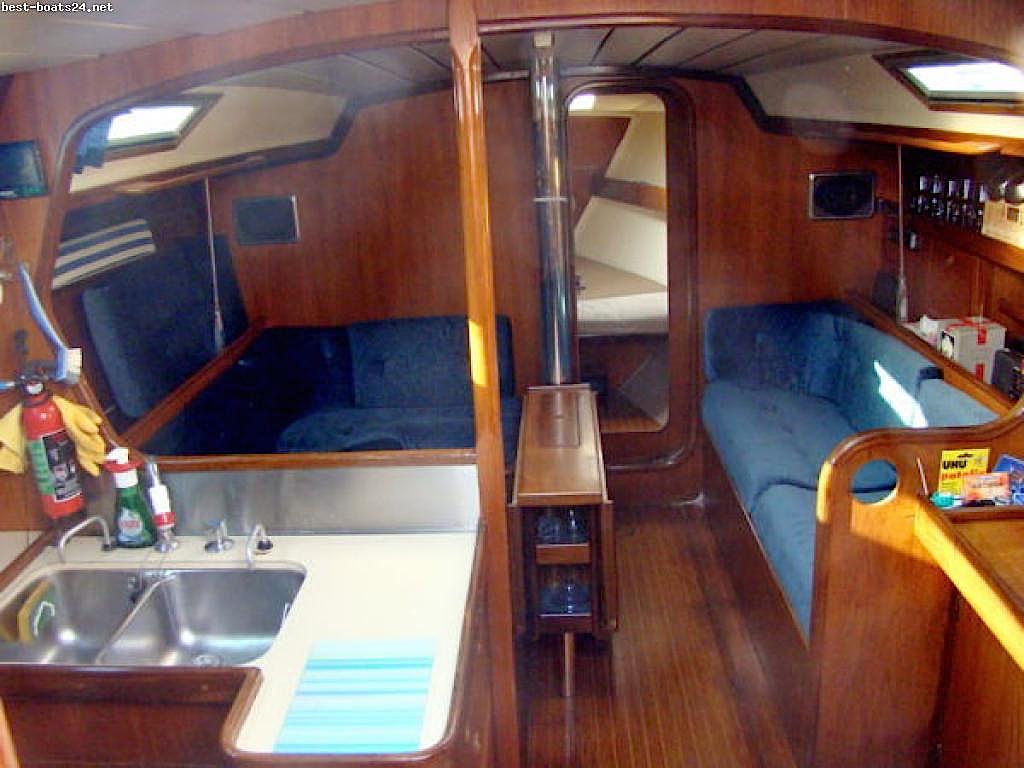 View of the saloon looking forward. The narrow pilot berths outboard of the settees are often converted into useful storage space 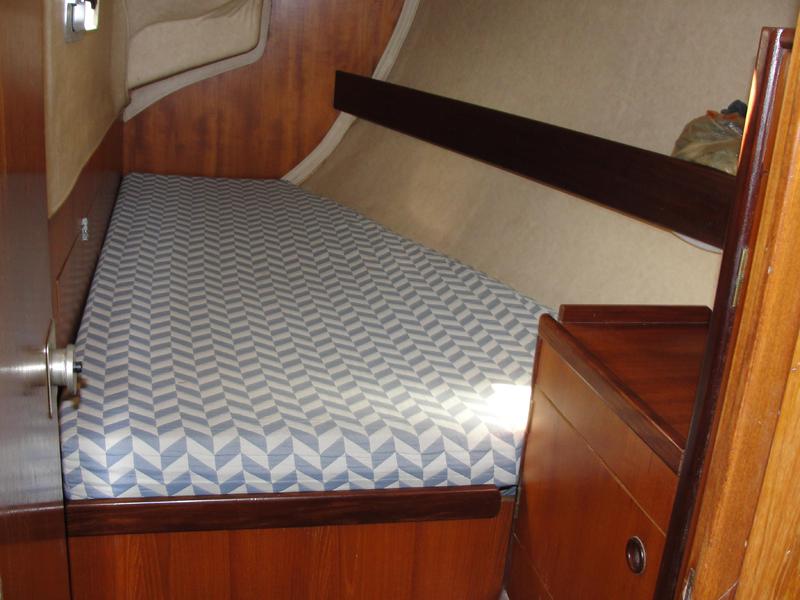 Peering into one of the aft double staterooms. Note the liner coming loose in the back 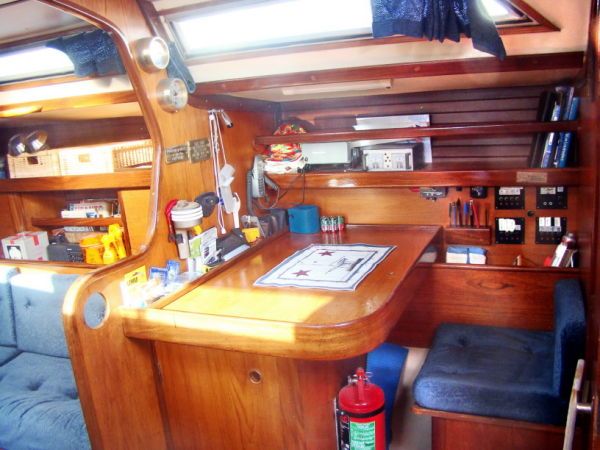 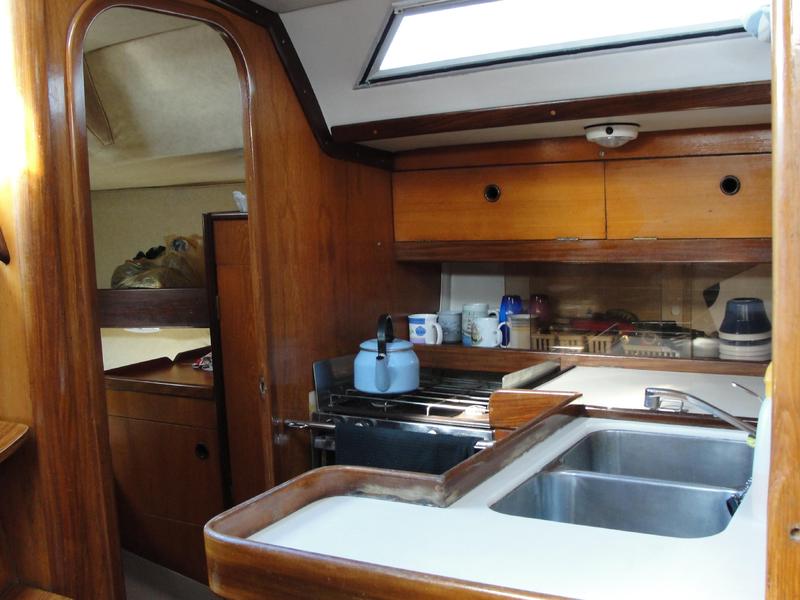 A view of the galley. The top-loading fridge box is to the right of the stove

The emphasis on berthing limits storage space, but there is more of it than you would expect on a boat of this type. On many boats the cramped pilot berths have been converted to cupboard or shelf space. In some cases, particularly on boats used for bluewater cruising, owners have also converted the tiny aft head behind the companionway into a giant pantry or storage locker.

The finish quality down below is good for a mass-produced boat and features lots of pleasing teak veneer and trim. The headliner, however, is a problem. In the main saloon the liner consists of vinyl-covered plywood panels that are easy enough to remove and replace when accessing hardware fasteners. Throughout the rest of the boat the liner is a foam-backed vinyl fabric glued directly to the deck and hull. Eventually the foam oxidizes and crumbles, the adhesive fails, and the vinyl comes tumbling down. The lazy man’s solution is to simply glue the existing fabric back in place, but with the crumbling foam still underneath this inevitably looks bumpy and ugly. The best solution is to remove it all and replace it with something stronger and more attractive, but this is a big job. It is also common for overhead hatches to suffer severe crazing over time and these, too, often need replacing.
The standard engine on the First 38 was the extremely reliable Perkins 4108 diesel. The engine is no longer manufactured, but parts are still widely available and rebuilds are common. A well-cared-for 4108 is capable of running well over 10,000 hours, but the beast is not immortal.

You should be particularly wary of any boat that has been in charter service. Engines on these vessels will have idled hours in neutral to charge batteries and may be worn out. Such boats are also likely to be ragged around the edges, with dated systems, and should sell at a significant discount. Many privately owned boats, however, have been well maintained and are filled with new gear and sails. These sell at a premium and are well worth the money. 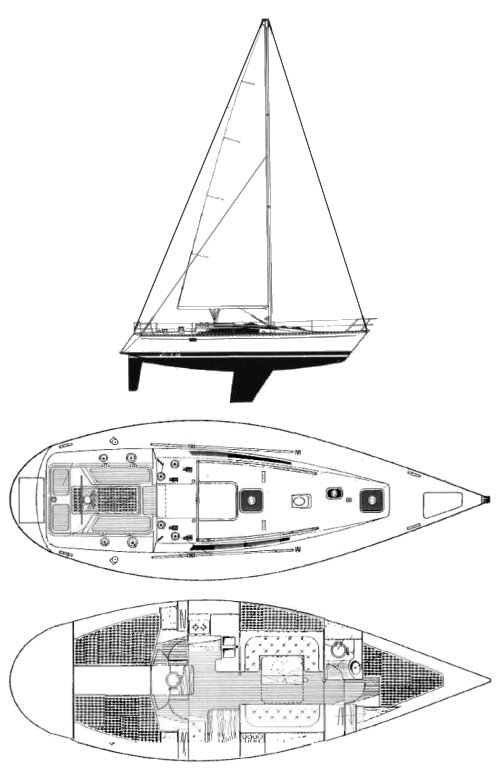