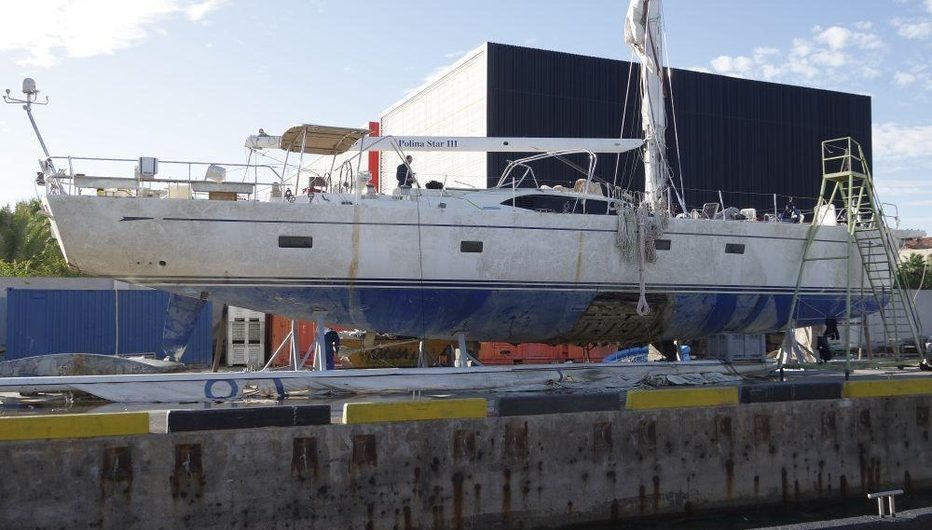 The genesis of this story was an incident that occurred back in July of this year in which Polina Star III, an Oyster 825, which reportedly had been extended to 90 feet and was just over a year old, was lost off the coast of Spain. The very first report came from Oyster, but contained no details, stating only that the boat “suffered a serious incident which compromised the integrity of the moulded hull.” A follow-up report by Yachting World, published in August, added little more, noting only that Oyster believed the boat may have run aground and there were rumors it had capsized before foundering.

In the last few days the Italian skipper of the boat has been sharing his account of the event, and photos of the wreck, which was recovered and has been closely examined, have also been circulating online. Though the exact causes are unclear, it is perfectly clear that there was no grounding and that the boat suffered from major hull delamination that led to its keel suddenly falling off.

The skipper, Alessio Cannoni, who has straightforwardly identified himself as “Alessiocannoni” in a Cruisers Forum discussion of the event, described the incident as follows:

The owner built the boat with the target to sail around the world, then he asked to me to follow the commissioning, to prepare the boat for this long trip and to choose and to organize the crew. I arrived in the shipyard in the April 2014, and I stayed there every day up to the launch of the boat in July, then I have sailed on her as captain about 10.000 miles: Southampton- Norway and back, Southampton-Las Palmas, ARC rally, cruises in Caribe, Antigua-Alicante (we never arrived).

The boat had two permanent crew member, to be able to manage this aspect I have organized a turn-over of 5 people:
Alessio Cannoni
Dafne Mele
Giulia Visintin
Monica Rosini
Riccardo Salimbeni

during last trip the professional crew was: me and Dafne.

the boat was not extended, she was designed and built by Oyster exactly as you can see in the pictures.

we sunk in a sunny day we were reaching in 18 kn of TW with about 1.3 m of wave, sailing with staysail and 80% main sail.

FACT 5: (SHORT DESCRIPTION OF THE ACCIDENT)

3 JULY 2015 TIME 14:07′
strong noise with vibration from the hull
14:07’15”
big flooding in the engine room
14:07’30”
water over the service batteries; all systems KO
14:07’45”
I bear away, the crew prepare emergency bilge pump, life rafts, grab bags, furl manually the stay sail, send the may-day by standard-C and by VHF
14:13′
the keel disconnected completely and the boat capsized, in that moment I was standing up in front of the chart table (deck-house) sending the may-day, the water was already cooling down my balls.
a fishing boat “fished”us after a couple of hours.

we made a video from the life raft, it show the two rudders pointing the sky perfectly intact, a big hole in to the hull; the relic float upside down all night long, the following morning we found the boat still floating about 15 miles from the capsizing point, one missing rudder, the other one partially broken.

the CEO of Oyster knows exactly this story, he sent two people on site the following day, I told them every single detail of the accident and I gave to them all the pictures and movies that I had and that I still have.

The photographs of the damage, which have been published by a pair of German and Russian sailing publications, are staggering: 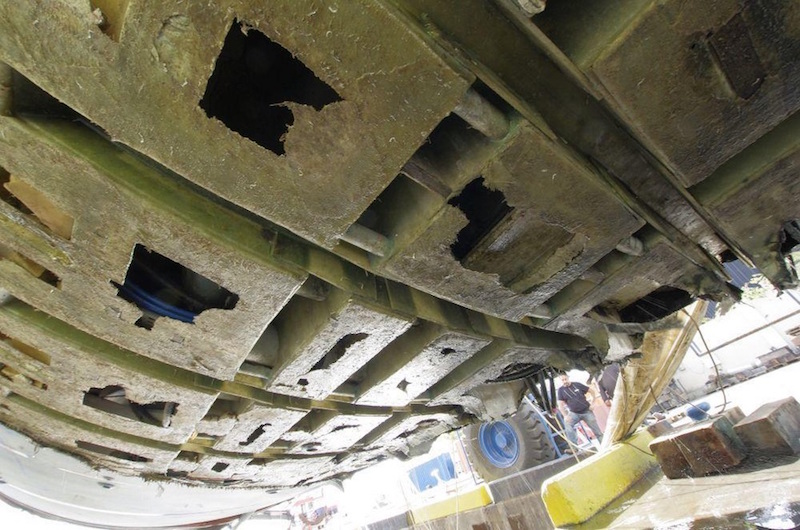 The hull’s interior grid structure in the area of the keel, with all the outer laminate torn away 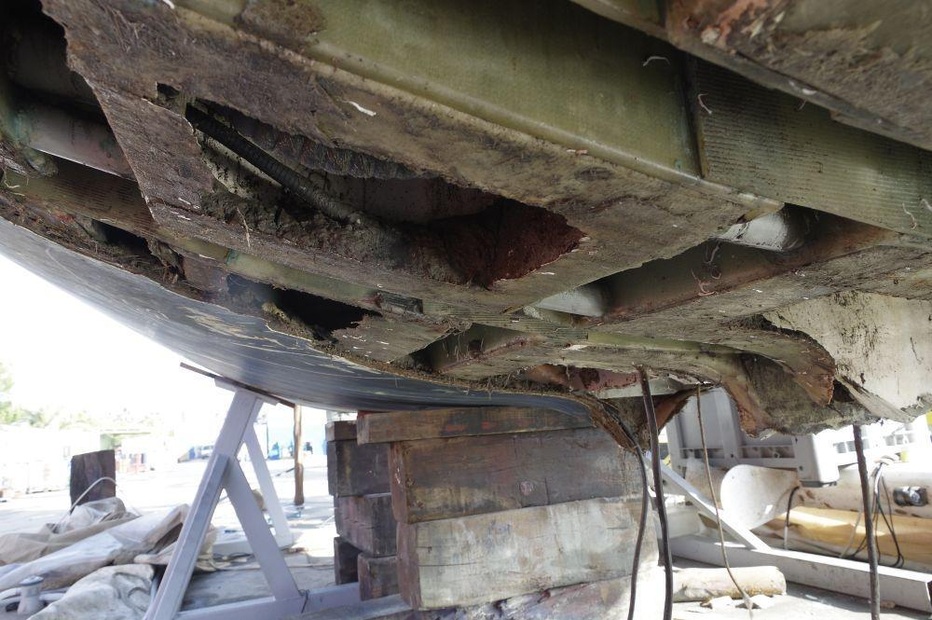 Same, showing the root of the keel stub and some remaining outer laminate 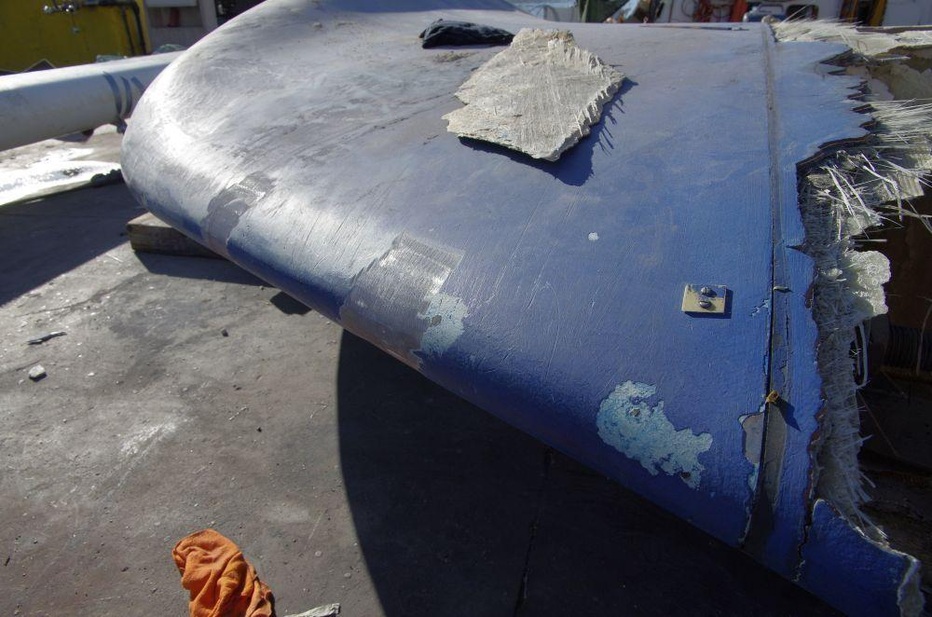 They recovered the keel, too! It is still attached to the bottom of the hull’s keel stub 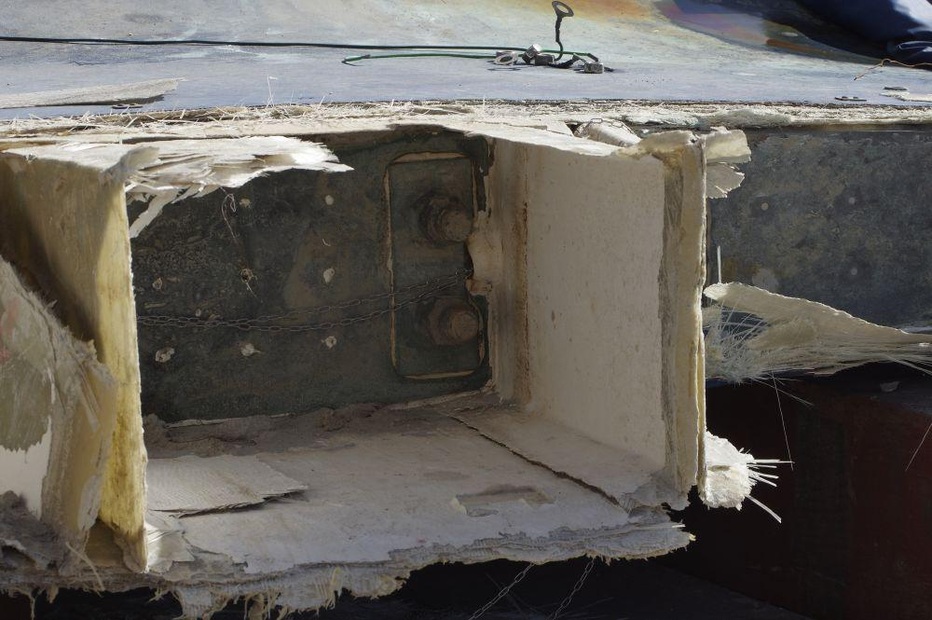 The top of the keel, showing intact keel bolts securing it to the bottom of the stub 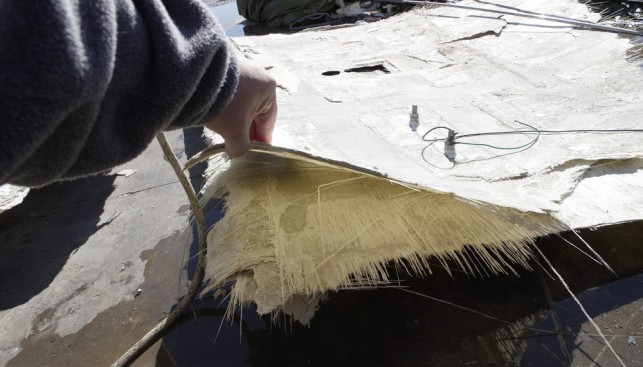 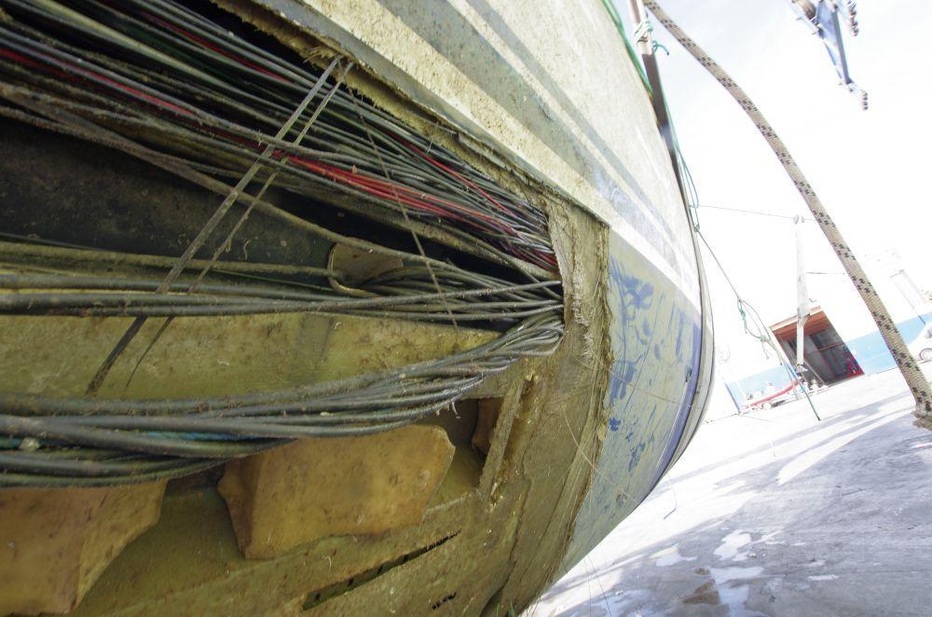 Exposed wiring runs where the hull laminate tore away 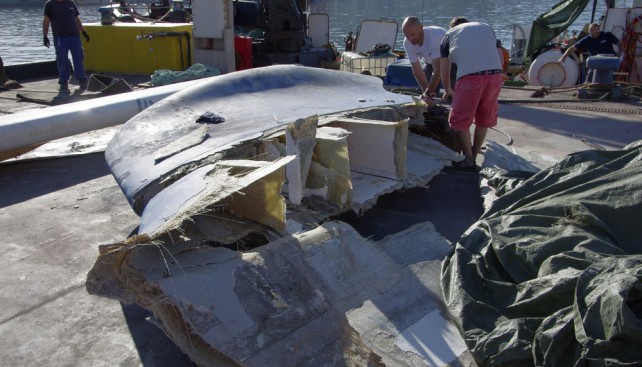 A broader view of the damaged keel section 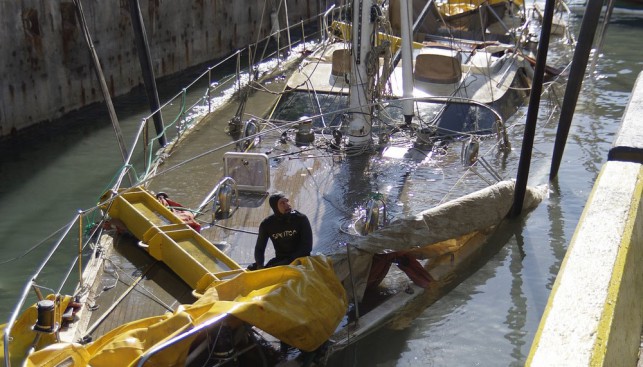 The wreck in the slings before getting lifted out 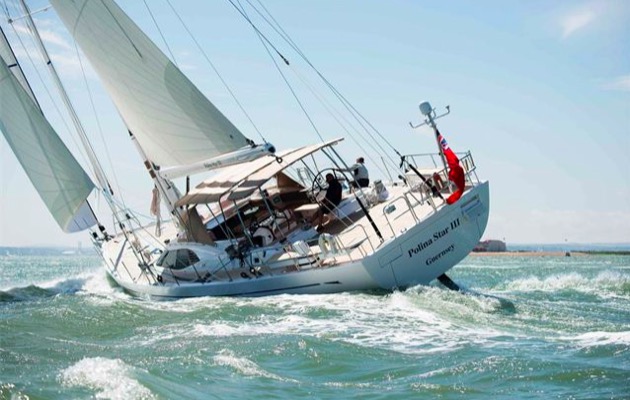 Polina Star III under sail before she sank

You can study the Cruisers Forum thread in detail if you want to read a lot of opinions about what went wrong here. Reading the thread and all of the skipper’s comments, it seems to me the design was in fact modified while the boat was being built to incorporate a transom garage and the keel was not modified to accomodate the change in the boat’s center of gravity. Instead a ton of extra ballast was placed in the bow. The most detailed analysis seems to be in this Russian publication here. Evidently the Russians are at the forefront here because the boat’s owner is Russian and after waiting four months in vain for Oyster to offer some reasonable compensation he has decided to go public with what happened.

Somewhat incomprehensible Russian diagram showing Polina Star III’s keel construction with some information on scantlings: 15mm laminate (presumably solid) in the walls of the keel stub, 45mm in the bottom of the stub, and 5mm in the stub’s interior structural grid

A more incomprehensible Russian diagram demonstrating I’m not sure what. Presumably something about loads

According to the skipper of the boat Oyster has sold three more 825s since this incident occurred, one of which is now sailing in the ARC.

I haven’t had the time yet to pick through the translation of the Russian article, so I’m not going to speculate or comment much on what exactly went wrong here. In that the skipper insists the boat was never grounded, it would seem to be a design/construction issue and judging from those photos it does look like the laminate is awfully dry. But I can’t really say more than that.

The major take-away here, however, is something we discussed during the awful Cheeki Rafiki tragedy last year: there are too many frigging keels falling off production sailboats! In their endless quest to reduce weight and cost, builders in this respect have found the boundary and have stepped over it. They need somehow to be prodded back over to the other side of the line.

I want to say also that Alessio Cannoni, judging from his description of the incident, did a great job managing this emergency. The 5-member crew had less than 7 minutes to act (according to Cannoni’s timeline) and all came away safe and sound. It is a shame the crew of Cheeki Rafiki did not enjoy the same fate.

UPDATE: Per the comments below, please note the author of the Russian article linked to above, in Yacht Russia magazine, is Artur Grokhovsky. He also took those photos you see of the damage to the boat. He was on site when the wreck was hauled and examined, and, as I noted above, I am sure can provide the most detailed analysis of what happened. Hopefully he will share some of this in English! The drawings posted up there are by Anton Shibaev.

YET ANOTHER UPDATE: I have spent some time now fiddling around with several different translation programs online, trying to get a decent computer-generated interpretation of Artur’s Yacht Russia story in English. Follow this link here to see the best one I was able to come up with. It is still extremely imperfect, particularly the more technical discussions, and the labels in the diagrams are not translated.

Evidently problems with the keel bolts had twice mainfested themselves prior to the yacht’s sinking in that a gap appeared between the ballast and the keel stub. Oyster undertook a repair the first time (it seems they simply tightened the bolts, which were not torqued to spec) and reportedly did not acknowledge the problem the second time it occurred. The overall conclusion of the article seems to be that insufficient laminate thickness was the probable cause of the accident. You should try to read the article yourself to see what you make of it. Hopefully Artur, or some other bilingual human, can provide a much better translation.

Note at the end of the article Oyster does submit that they will be releasing their own report on this incident. We obviously look forward to seeing that! They refused, however, to answer any questions from Yacht Russia. 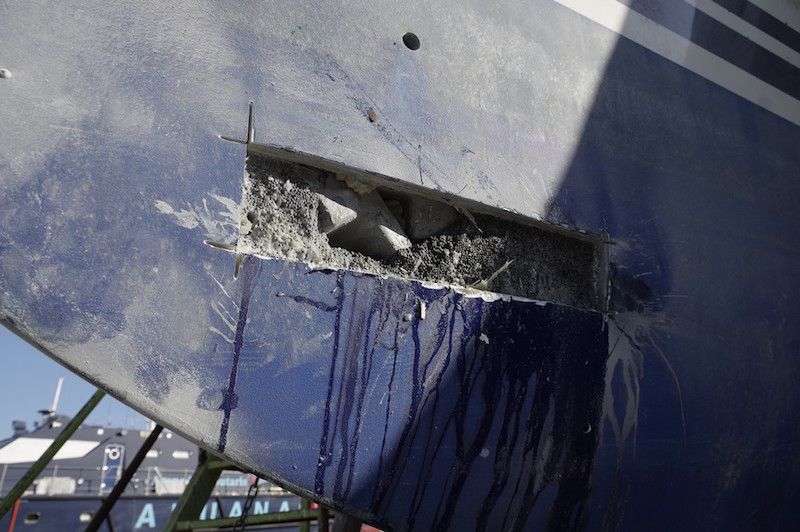 And here is the photo (credit Artur Grokhovsky) of the extra ballast in the bow someone down there in the comments section wanted to see! 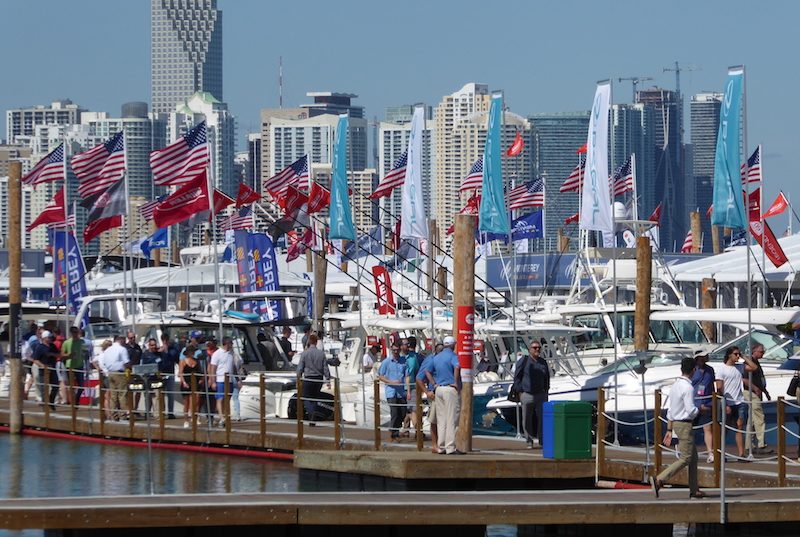