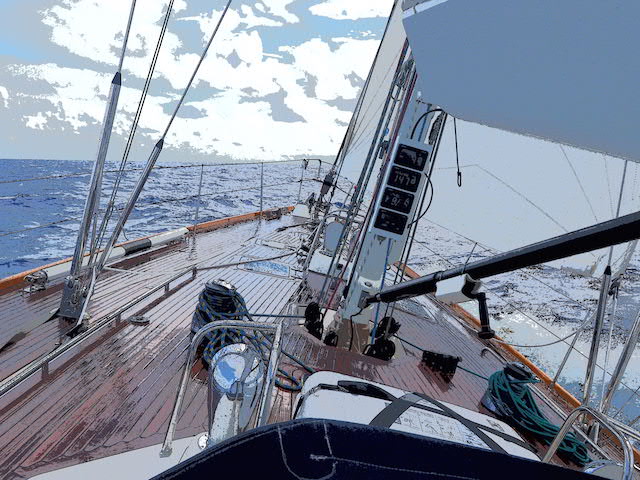 This is called going against the flow: sailing from Florida to the W’Indies against the prevailing easterly tradewinds. I did something similar many years ago, moving a Taswell 56 from Great Exuma in the Bahamas to St. Thomas, and remember it as an exercise in gross masochism. Like banging your head against a wall… for days on end. When you do it in little hops, from one Bahamian island to the next, they call it the Thorny Path. When you do it all in one fell swoop they should maybe call it the Quantum Thorny Leap.

My first piece of advice, if you’re thinking of trying this: go in a big boat! That Taswell was OK, but as I recall it sure did slam a lot jumping off waves. Hence the head-banging simile. This time I was on a Swan 60, newly purchased by Bob and Kristin Beltrano, a pair of airline pilots, who are well known in Swan circles as the owners of Nai’a, the Swan 53 they had previously owned for 15 years and which they had lived aboard for the past 10 years, cruising and racing her around the islands each winter.

The new Nai’a, ex-Kalevala, was originally built in 2003, to a German Frers design, and is actually a pretty unique boat, as you can see in this listing here. With her reconfigured transom she actually measures over 64 feet long and has a highly customised interior. The most important thing, from our perspective, is that she also has a smooth motion going to weather in a seaway. No slamming! None at all during the six-some days I was aboard. 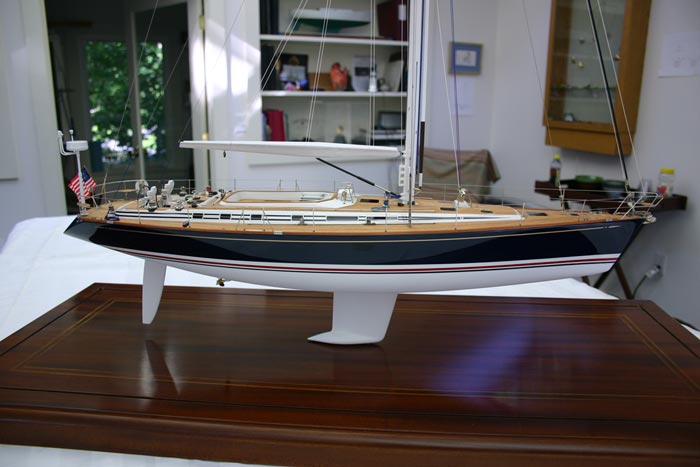 Model of Kalevala (you can read a description and see more pix of said model here) showing her underbody. I can’t tell you why exactly, but something about this shape severely reduces head-banging when sailing to windward

Not that we didn’t have some problems. Bob and Kristin have only owned the boat for a little over a month (it was shipped over from Europe) and had only been able to spend a week working on it before we took off from West Palm Beach last Thursday. We were in a fantastic rush that morning! To squeeze out the Lake Worth inlet with our 10 feet of draft, we needed to be off by 10 a.m. to catch high tide, but as of 8:30 we still had to tend to the following: 1) supervise a pair of painters who came to clear-coat the newly repainted transom; 2) figure out what was wrong with the raw-water inlet for the refrigeration system; and 3) take on several hundred gallons of fuel and water.

I never thought we’d make it, but somehow we did and dropped our lines at precisely 10:15.

The problem with the refrigeration inlet proved to be semi-spectacular. Not only were its two strainers choked with weed, but we also extracted a four-inch length of sugar cane that somehow got rammed up inside the through-hull fitting. 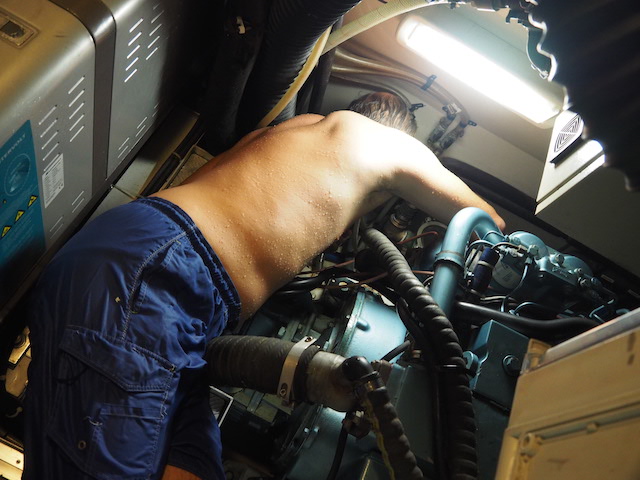 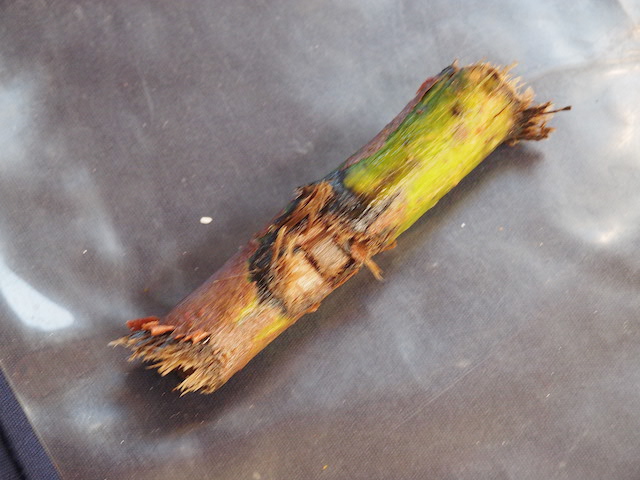 The offending sugar-cane stalk, which Stephane pulled out of the through-hull after diving on the hull. (Sorry this shot is so out of focus!) I refuse to believe this thing was just sucked up the inlet. Someone had to have put it there

Then, after we finally slipped out the inlet and were only a few miles offshore, the engine started overheating. 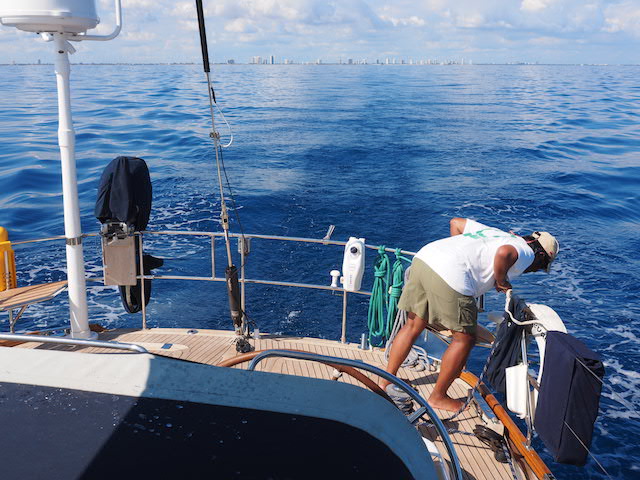 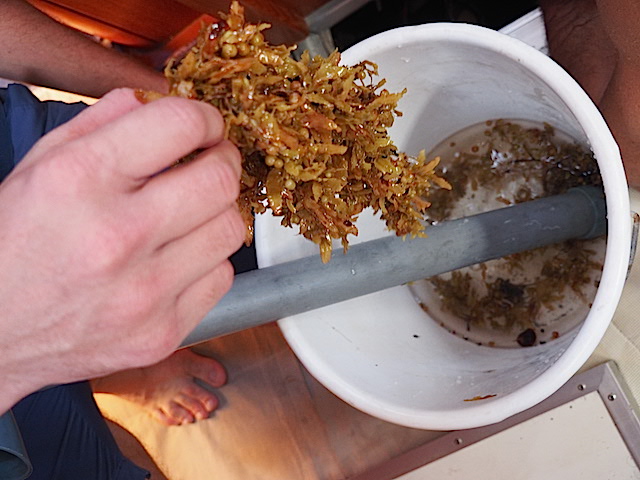 At least we didn’t find any more tree branches in our plumbing, and once the intake was clear again we advanced full steam ahead.

The forecast for the first two to three days was for light wind, so our plan was to motor hard through the northern Bahamas and get as far east as possible before things started picking up. One nice thing about a big boat, of course, is that you can make major miles (in our case over 200 a day) spinning a prop. 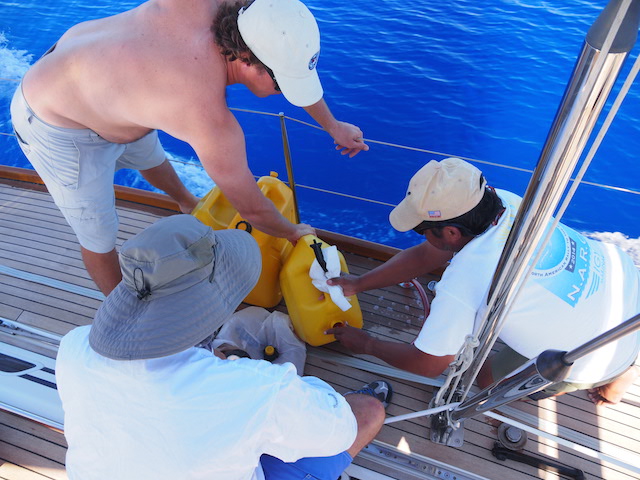 Though you do have to burn major fuel to do it. In addition to the three 80-gallon fuel tanks onboard we carried 12 jerry jugs and twice siphoned fuel from these into the tanks while underway 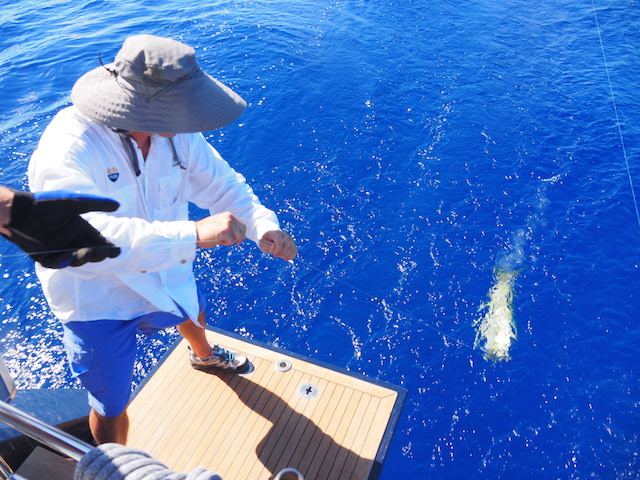 We also did some fishing. Here’s Stephane landing a nice dorado he hooked 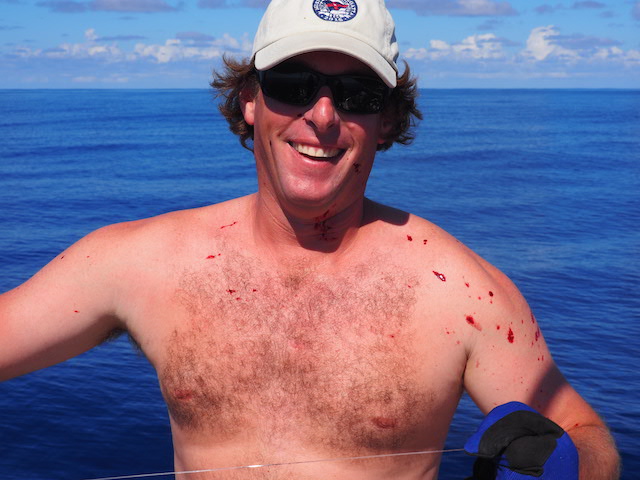 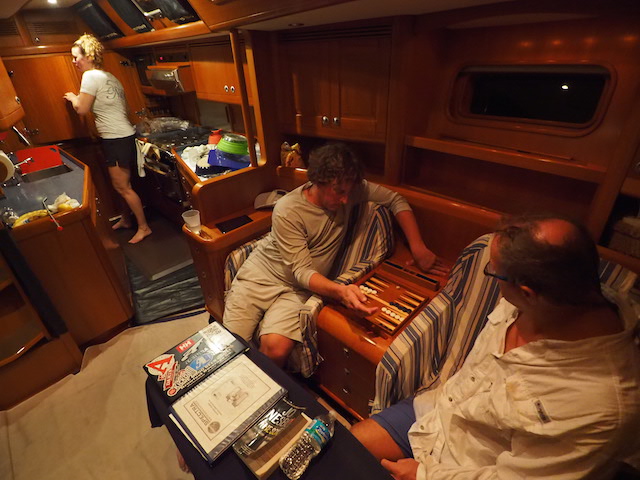 Creature comforts. Stephane and Walter play some backgammon while Kristin prepares for dinner

Our days of wine and roses could last only so long however. By Saturday evening the wind finally was strong enough we could no longer profitably motor into it, and we had no choice but to unroll the jib, put our shoulders down, and start beating into it.

And yes, I did say the new Nai’a is unusually comfortable bashing to windward. But comfort is always a relative term. No, we weren’t slamming off the waves, but we were well heeled over and there was also an inevitable amount of lurching about. Even in the best of circumstances, on the best of boats, a hard thrash to weather does get exhausting after a while. 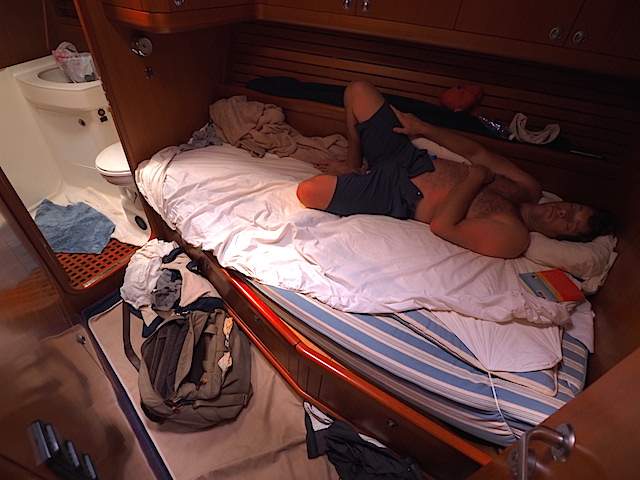 Walter sleeps in his own juices as we thrash our way eastward. He had the driest, most comfortable leeward berth… the lucky dog 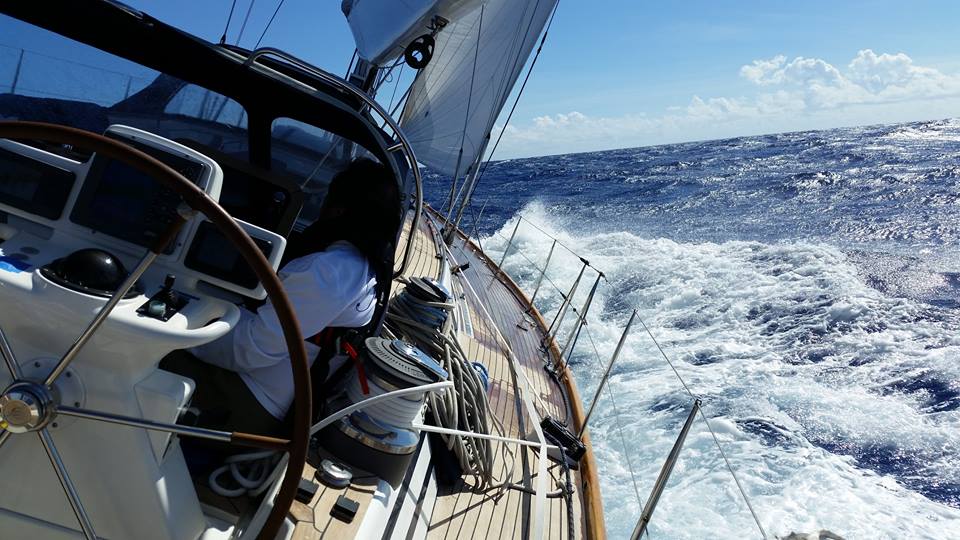 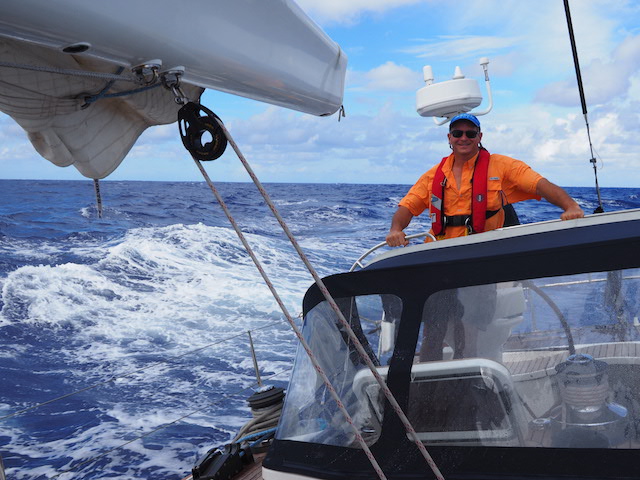 Skipper Bob tried to play rope-a-dope with the trades as best he could. When we stumbled into some squalls on Sunday night and the wind piped up to 30 knots, he had us running straight south for a while, so as to keep the mess on our beam, and later he cracked off our closehauled angle as soon as he dared.

The following night, while I was on watch, we had more squalls with wind into the high 20’s, but by then we’d given up too much southing and had to hang on closehauled again.

As it was we couldn’t lay the BVI and ended up pulling into San Juan, PR, on Tuesday night shortly before sunset. We loaded up on fuel, got a good night’s sleep, then set out again first thing the next morning. 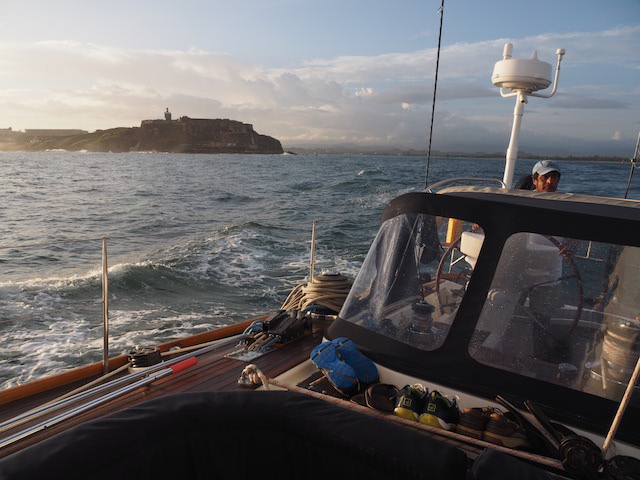 Bob on the wheel as we bid adieu to San Juan

Fortunately by now the wind had subsided, and we had an easy day’s motorsail to Tortola. We even kept the A/C on below and slipped east those last few miles in superyacht style. 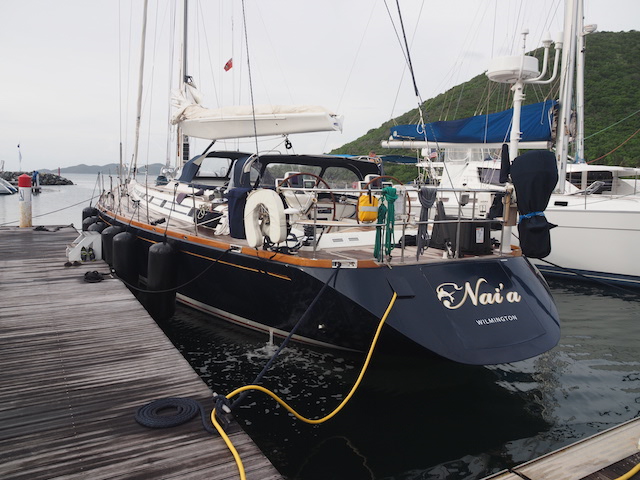 The new Nai’a safe in her berth at Nanny Cay

All in all, given the route, it was a mighty fine passage.

For those in the market for a Swan 53, please be advised that old Nai’a is on the block, and the sellers, needless to say, are motivated. You can check the listing here.