I’ve never met Joe Harris, but I met his wife and kids once at the swimming pool at Capt. Oliver’s Marina in St. Martin while loitering there on my own boat. The Harris family was out on a straight bareboat charter, just like anyone else, and it wasn’t until later that I pieced together everything the missus had told me and figured out who exactly they were. From a distance at any rate, Joe has always struck me as that kind of guy: low key and under the radar.

Anyway, I’m now starting to dial into Joe’s latest scheme to fulfill a long-held ambition to race solo non-stop around the world. He’s always wanted to do this in an organized race with other boats, but since there is currently no relevant event he can join in his Akilaria RC2 Class 40 Gryphon Solo 2, he’s setting out on his own. His goal being to break the official WSSRC speed record for a non-stop solo circuit in a 40-foot boat (137 days, 20 hours and change) set by Guo Chuan (also in an Akilaria) in 2013. He expects to depart from Newport next month. 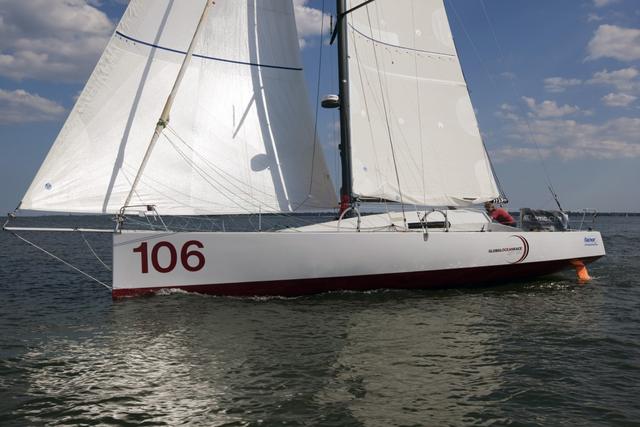 This is the real deal. Click on through to Joe’s website and you’ll see he has a serious ocean-racing resumé that includes first-place finishes in the 2014 Atlantic Cup, the 2007 Bermuda One-Two, and the 2005 Transat Jacques Vabre. None of this over-funded pie-in-the-sky wanna-be ambivalence á la Stanley Paris.

Interestingly, in a bid to get himself a real heavy-weather shakedown, he set out in last week’s crapola conditions for a happy jaunt along the Maine coast, described by Joe himself thusly:

Today’s story involves a 24-hour “heavy weather training run” aboard GS2 in preparation for the upcoming lap. The weather forecast for Wed/Thurs/Fri was grim–torrential rains followed by winds of 20 to 35 mph and big seas–sounded like a good opportunity to get my ass kicked and see what did and didn’t work on the boat in these extreme conditions and try to get it fixed before the big trip. This is always a good idea but few people actually do it because the reality is that going out sailing in the rain and cold and wind sucks. But inevitably some weakness is discovered in the man or the boat that would be great to fix before you have to live with it for four months alone.

So I arrived at Maine Yacht Center in Portland on Wednesday morning to find the weather exceedingly hideous: torrential tropical rain–winds gusting to 35 mph and very limited visibility due to fog. So even I said, “Maybe this is not so smart.” But after a while the worst abated and by 3:00 I decided to go for it. The MYC boys helped me get off the dock clean and I hoisted the main with two reefs in Portland harbor and headed out the cut to the Atlantic. My goal was to go through all the storm sails and procedures, so I hoisted the staysail and headed downeast at about 10 knots boatspeed in a 20- 30-knot breeze.

As I went past Monhegan Island towards Seguin Light [Editor’s Note: presumably he means this the other way around, as Seguin comes first as you sail east from Portland], I ran over a lobster pot, which snagged on the boat’s keel and brought us to a stop from 10 knots. It is a really weird feeling to have this happen, because it is like the hand of God has inexplicably reached out and stopped the boat while the sails are still full–like you have gone from an action video to a still life. I tried every conceivable trick to get the rope from the lobster trap off the keel bulb but to no avail. Since it was by then well after midnight, I let the boat drift along while I tried to get a little sleep.

At daybreak, I got the boat sailing again and it was moving, just not at its normal pace–very sluggish. But I had gone about 10 miles during the night, so I thought maybe the pot had cleared itself and hoisted more sail even though it was blowing 35 knots. I was rewarded with the tack shackle of the jib exploding, and the hanks that held it to the forestay gave way like the buttons on the front of a dress shirt so the jib was flogging itself to death attached only by the halyard at the top and the sheet at the deck. I tried to lower it slowly, but it ended up in the water and then under the boat, which made retrieving it rather difficult. Back to the sailmaker for that sail!

So after recovering from that debacle, I realized we had been dragging around lord knows how may lobster pots for quite a while, so it was time to be free. However, I was not excited to leap into the chilly and dark Maine waters, so I called a friend to see if we could find a diver. However, I soon realized I was too far offshore to reasonably get to, so I had to suck it up and jump overboard to cut the line. For some reason, I was quite a chickenshit about doing this–aside from the obvious risk of being alone and potentially not being able to get back on the boat. But eventually I sucked it up, stripped and jumped into the water with a mask and a knife and cut away the lobster pot and rope wrapped around the keel bulb 10 feet below the surface. I was able to do it quicker than I expected and surfaced and began to swim like crazy back to the boat, which was drifting downwind rapidly. But I realized quickly that I would not catch it by swimming, so I pulled myself in to the boat with the safety line I had tied around my waist. It felt very good to hoist myself over the transom back aboard amidst the rolling seas breaking over the boat.

By this point I felt I had learned enough for one day, so headed back to Maine Yacht Center to nurse my wounds and internalize my learnings.

I did learn a lot about the boat and was able to overcome the fear of jumping into the cold ocean offshore alone, so I think it was worth the trip. Now ready for a beer and a sleeping bag. 40 days.

Personally, that doesn’t sound like too shabby a shakedown to me.

PS: Joe’s little adventure is very apt illustration of why you have to be careful sailing–or worse, motoring–off the coast of Maine at night! Those lobster pots bite the big one, and a boat like a Class 40, with a deep bulb keel, is practically custom-designed to catch them.