I’ve been studying the specs on this new Offshore Cruising Tender (see image above), which was developed by Russell and Karin Carlyon, a Kiwi cruising couple who evidently often found themselves pining for a better dinghy during their 7-year circumnavigation. We can only presume this represents their idea of “the perfect dinghy,” which is, of course, a highly subjective concept. After studying their website I’d guess their goal here was to create a dink with most of the attributes of an RIB tender, only more rugged and durable.

It certainly has a distinctive look, and for a hard tender it is remarkably light, just 92 pounds. Construction is relatively exotic–carbon-reinforced glass with Kevlar abrasion pads over a 10mm PVC foam core–yet the Carlyons claim the boat is easily repaired. There’s also a big closed-cell foam bumper encased in Sunbrella running all the way around the hull. Their most remarkable claim is that the boat will plane when powered by a 3hp outboard.

Say what??? (I hear you cry.) Is that with more than one person aboard?

And is that a two- or four-stroke motor we’re talking about?

So I’m a little skeptical of that, but I actually do like this boat, though it’s not at all my idea of a perfect dinghy, because, like all hard tenders, it doesn’t look like it is very easy to stow… 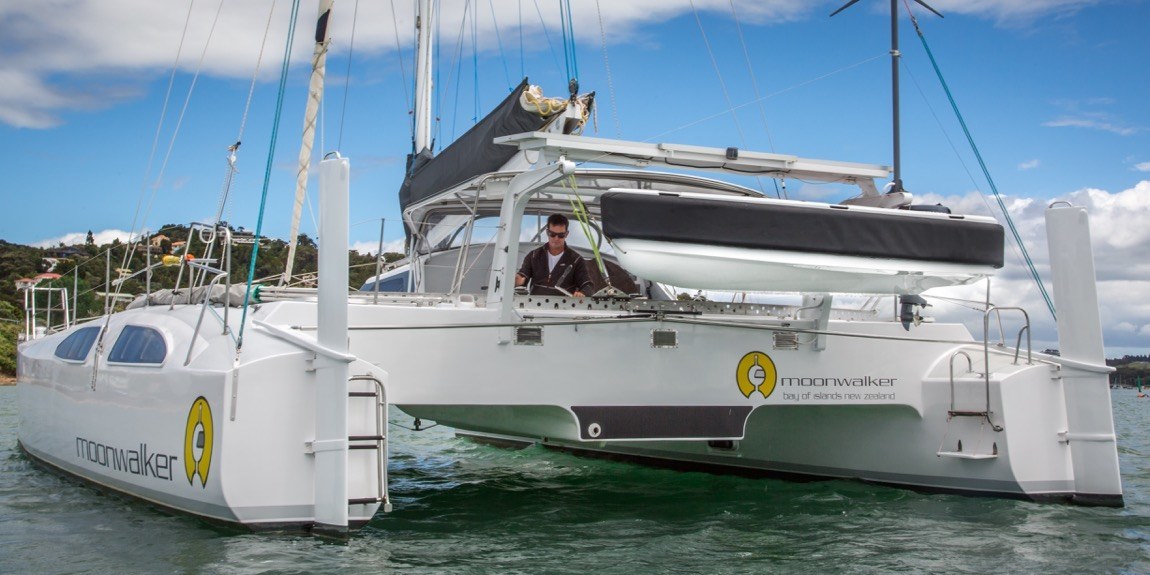 Unless you plan to hang it from davits (as shown here), which I personally consider a travesty. Though perhaps I’ll feel differently about that if in some future life I end up cruising around in a catamaran.

As I’ve discussed before, I currently favor roll-up inflatables, because they are very stable for their size, can carry big loads, are very light, and most of all can be folded up real small and stowed away in a sail bag. This last feature, I feel, is particularly important if you cruise on a monohull under 40 feet long that you are unwilling to uglify and otherwise endanger by sticking stern davits on. (See, e.g., Annie Dike’s story in the current issue of SAIL Magazine for a thrilling description of what it’s like to have stern davits fail in heavy weather.)

Of course, I must concede that inflatable boats do have two huge drawbacks: a) they are far from indestructible and eventually do wear out no matter how well you take care of them; and b) they row poorly, though you can ameliorate this to some extent by equipping them with real oars. I can live with these flaws, however, and what I actually most pine for is an ability to take my dink out for a sail when the mood strikes me. Which is why the Dutch DinghyGo inflatable sailing tender caught my eye last year. 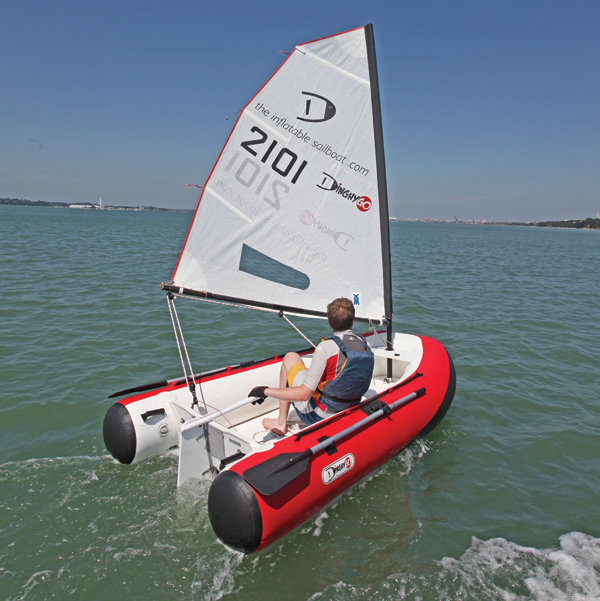 I have yet to meet one of these in the flesh (I think they still don’t have a North American distributor yet), but when I do I may be sorely tempted to spring for one.

The point being that perfection is always in the eye of the beholder and in most cases can’t really be achieved anyway. Though it is always interesting to consider what other people think perfection might be.

One very common theme in “alternative tenders,” I’ve noticed, is the “survival pod” trope. As in: why not make your dinghy your liferaft and equip it as such? Even better: why not make it a survival pod you can sail somewhere, so you don’t have to wait around to be rescued???

I think most of us will remember the old Tinker sailing inflatable tender, which I believe had an optional survival-pod package you could plunk down bucks for if you wanted. 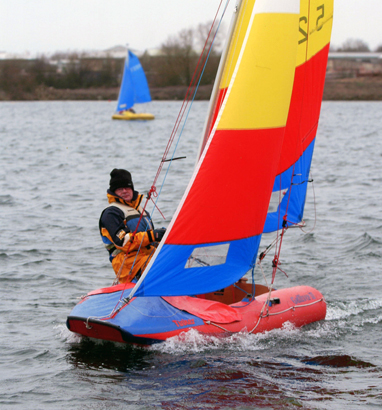 A Tinker under sail

I never had a chance to try one of these, and, alas, it seems the venerable Tinker is now out of production.

The current hard-bottomed alternative is the Portland Pudgy, a festive roto-molded dink that can be ordered in bright colors with both a sailing rig and a survival pod kit. 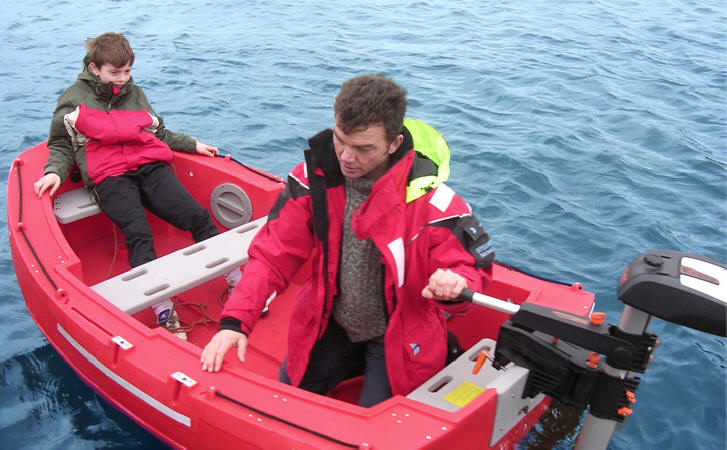 The Pudgy under power. Not a lot of room for luggage

But the problem with both these boats, really, is that they are much too small. Too small to serve as decent tenders, I think, and too small to be decent survival craft. 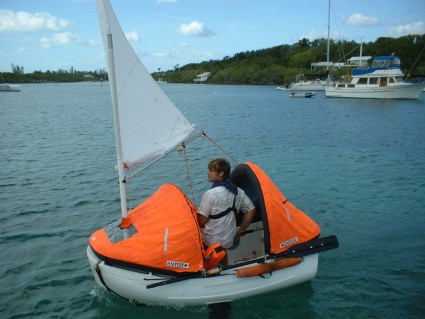 The Pudgy in sailing survival mode. OK for a singlehander, maybe

There’s one of these boats I remember particularly well, the Clam, which was designed by Steve Callahan, who cleverly called it a FRIB, or Folding Rigid Inflatable Boat. What it was really was a folding hard tender with a really big inflatable sponson running around its gunwale. It was stable (though not quite so stable as a true inflatable), big enough to carry a decent load, motored well, rowed very easily, and also sailed well. And, of course, because Steve himself once spent 76 days drifting across the Atlantic in a liferaft wishing he could speed things up a bit, it also could be tricked out as a sailing survival pod. 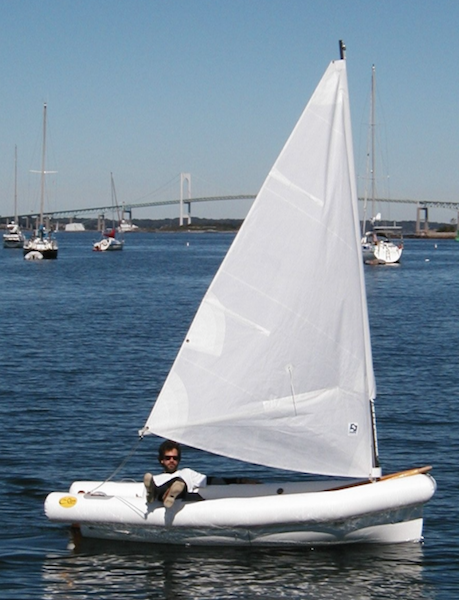 That’s me sailing a Clam prototype in 1998 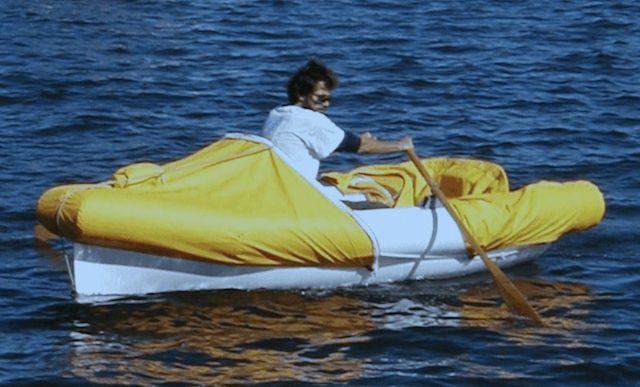 And here I am rowing it, surrounded by a partly erected survival canopy 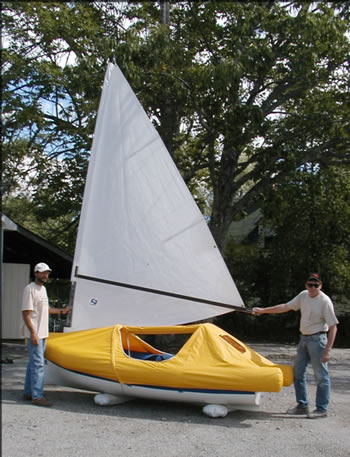 In full survival mode, with a sailing rig and enough room for a couple of survivors at least 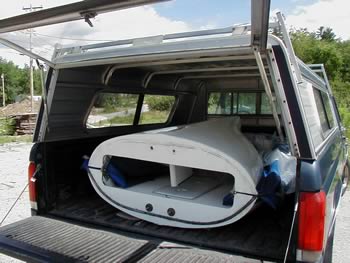 Folded down for stowing

As you can see, I got a chance to test the Clam way back when, and I was actually pretty impressed with it. I never thought too much of the survival-mode features, as these days, what with modern satellite SAR comms, you are very unlikely to end up in a long survival drift like Steve did. But it was a pretty big tender (11.5 feet overall), stowed down pretty small (about 5 feet), and did more or less everything else I want a tender to do.

Unfortunately, only about 14 of these boats ever got built. Which just goes to show that a perfect boat may not always be a successful one.