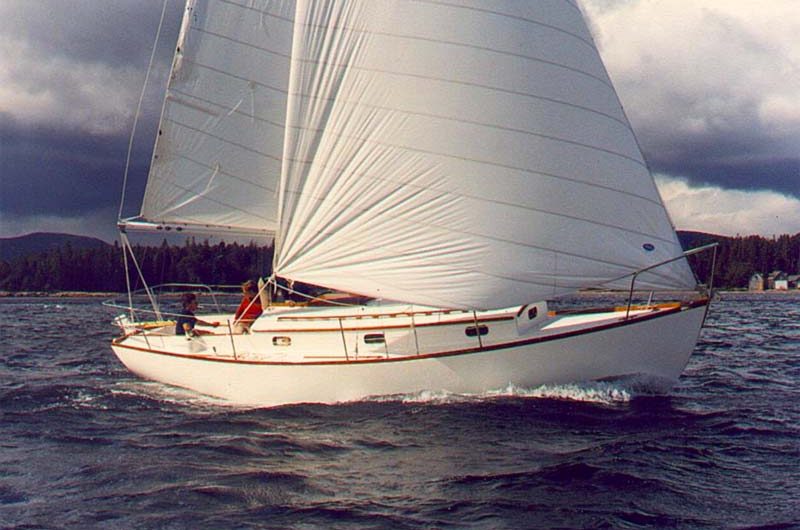 To function as a proper airfoil a modern Marconi sail must present a curved surface to the wind. To the casual eye a sail may look like a flat two-dimensional piece of cloth, but in fact it has a very specific curved shape built into it. This shape is carefully engineered, depending on what sort of sail it is and how it will be used.

To turn a piece of flat fabric into a curved foil, the fabric must be cut into panels and stitched back together again. By cutting a convex curve along one edge of a panel and stitching it to a straight edge on an adjacent panel, a process is called broadseaming, a unitary curved surface is created once all the panels are joined together. Where the edge of a sail will be attached to a straight spar, as with a mainsail bent onto a mast and boom, shape can also be created by cutting a convex curve along that edge. This is called edge-shaping and is not commonly used these days.

In recent years there has been much publicity about shaping laminated sails by “molding” them, but this is only a crass marketing ploy. The so-called molds on which these sails are built are really nothing more than curved workbenches, and in reality all laminated sails are built with shaped edges and broadseamed panels just like any other sail. 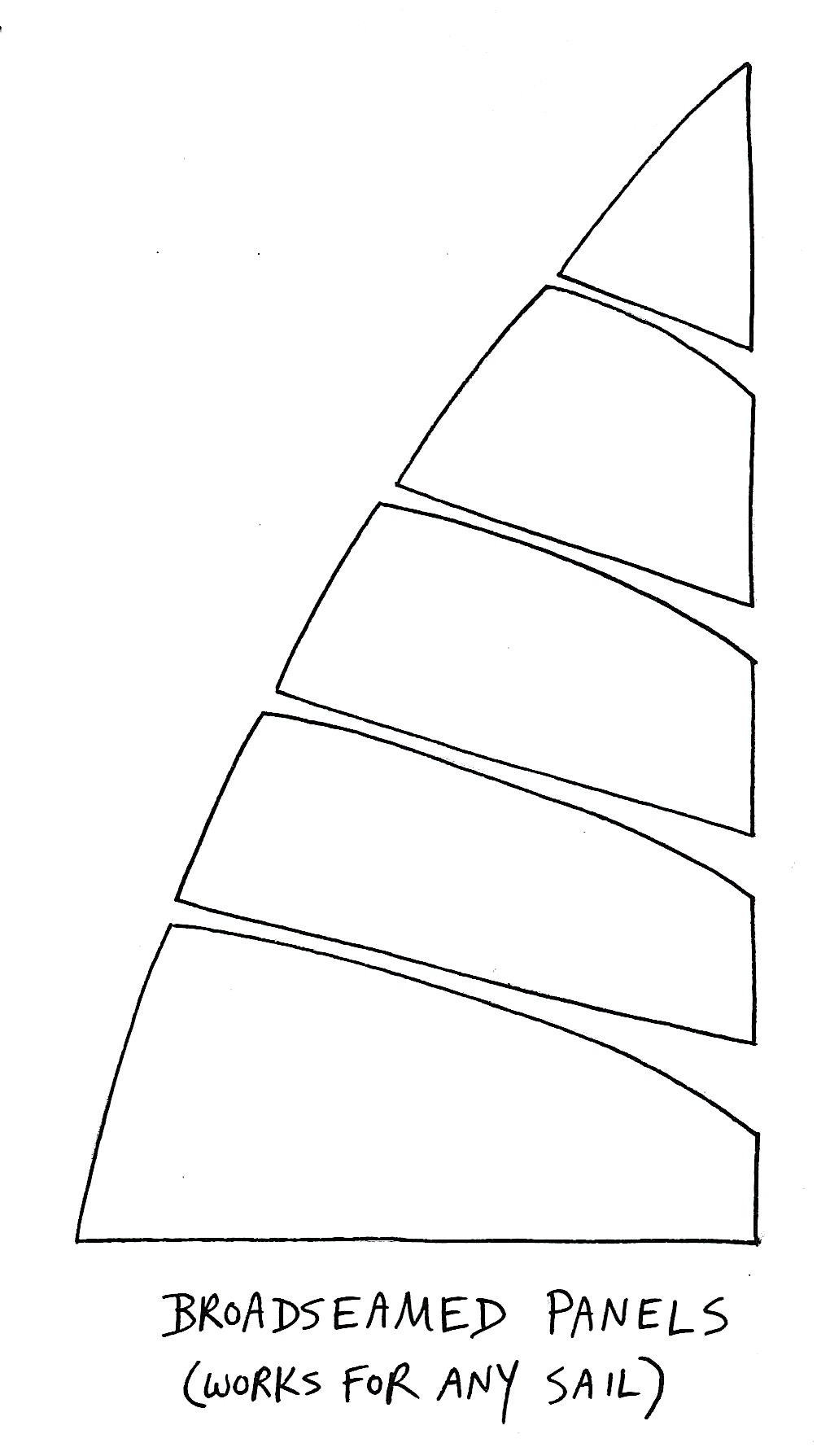 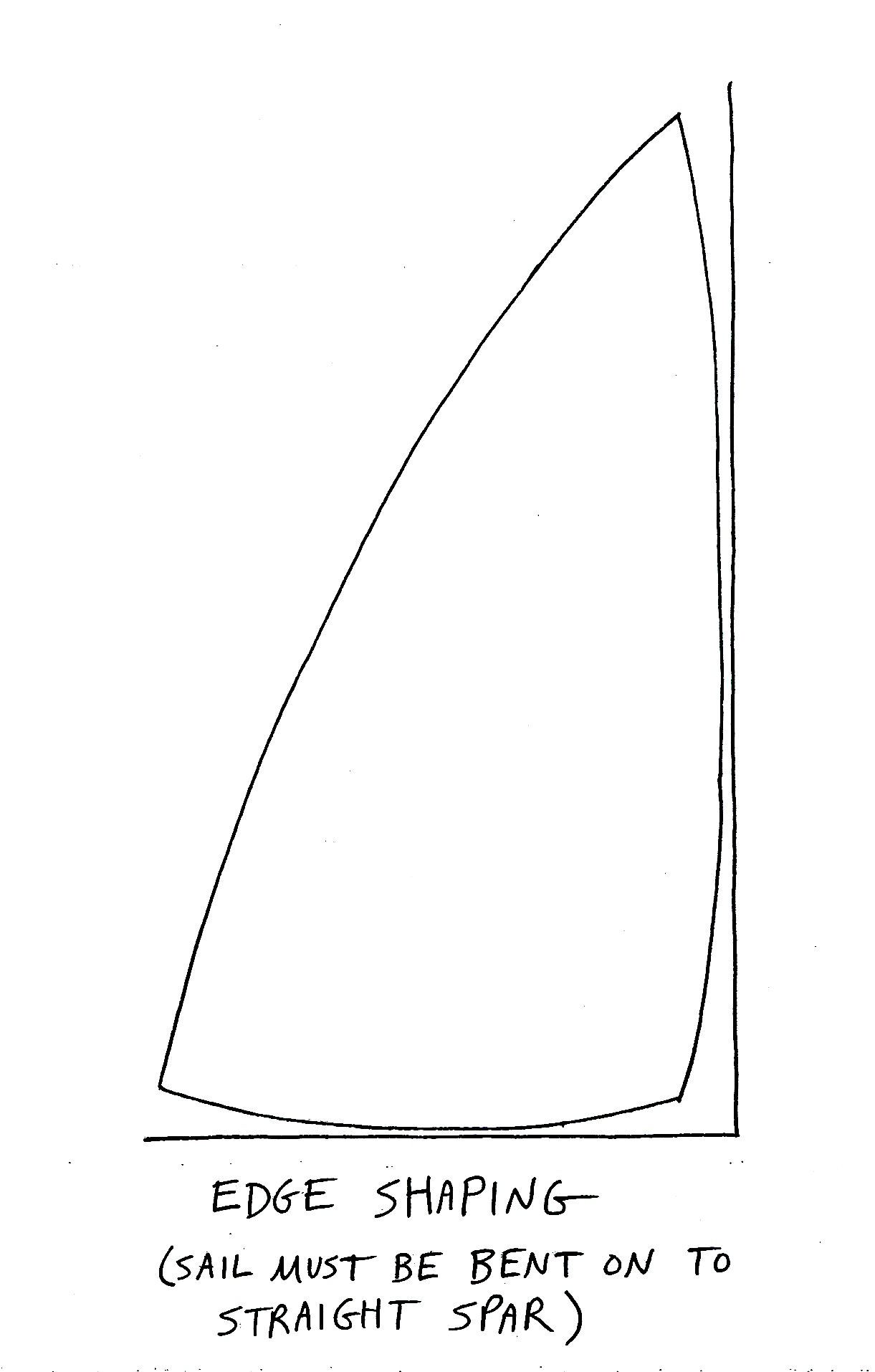 How broadseamed panels of a sail are laid out depends on the strength characteristics of the fabric they are made from. Like any woven cloth, common sailcloth has a warp, composed of threads running the length of the fabric, and a fill, which are those threads woven at a right angle through the warp. A cloth can be made stronger in one direction than the other, or can be equally strong in both directions, but it is always weakest when a load is imposed along its bias, at a diagonal angle to its weave. To ensure that a sail made of cloth maintains its designed shape when filled with air, its panels should be oriented so that as little load as possible is carried along the bias of any given panel.

The simplest way to make a sail reasonably efficient is to use a crosscut pattern. Here the panels are laid out parallel to each other with the seams intersecting the leech of the sail at right angles. A crosscut pattern can be used on both mainsails and headsails and is still probably the most common pattern in use today. Another traditional alternative for headsails is the miter cut, where one set of parallel panels with seams bisecting the leech is joined to another set with seams bisecting the foot at a central seam that runs from the clew of the sail to the middle of its luff. 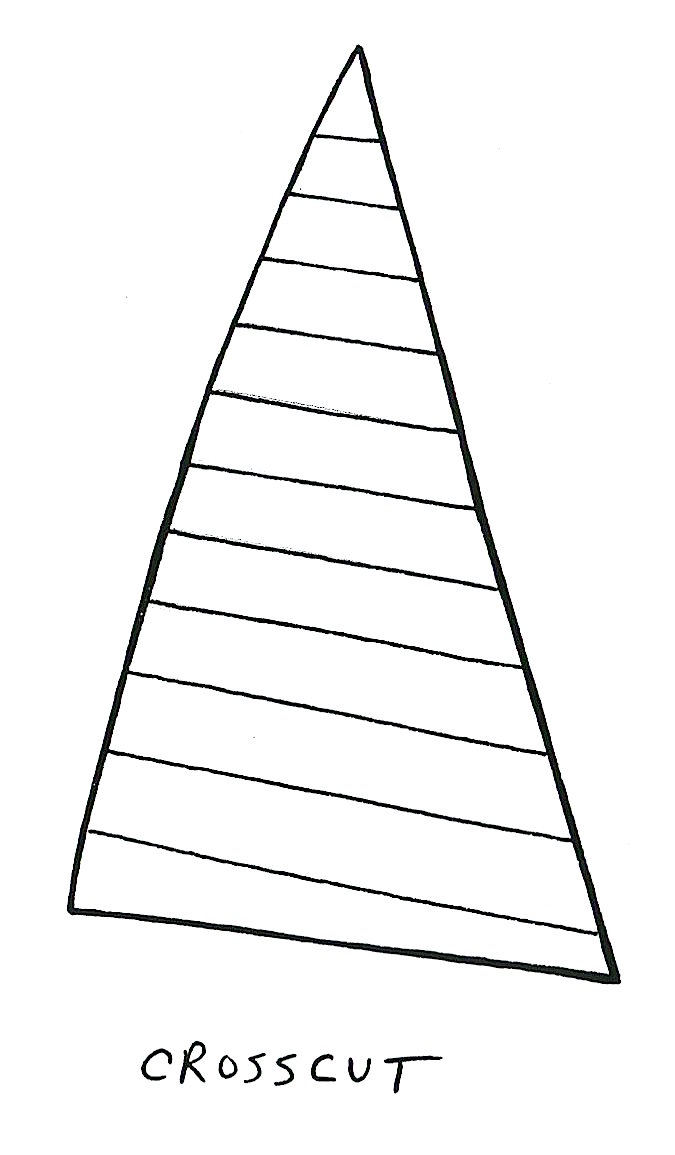 The more sophisticated alternative to crosscut and mitered patterns are radial patterns that are designed to orient a sail’s panels more precisely along its load paths. The more common patterns are the biradial cut, which has two sets of panels radiating from the head and clew that meet at a central seam that bisects the luff and leech, and the more complex triradial cut, which has panels radiating from all three corners of the sail. 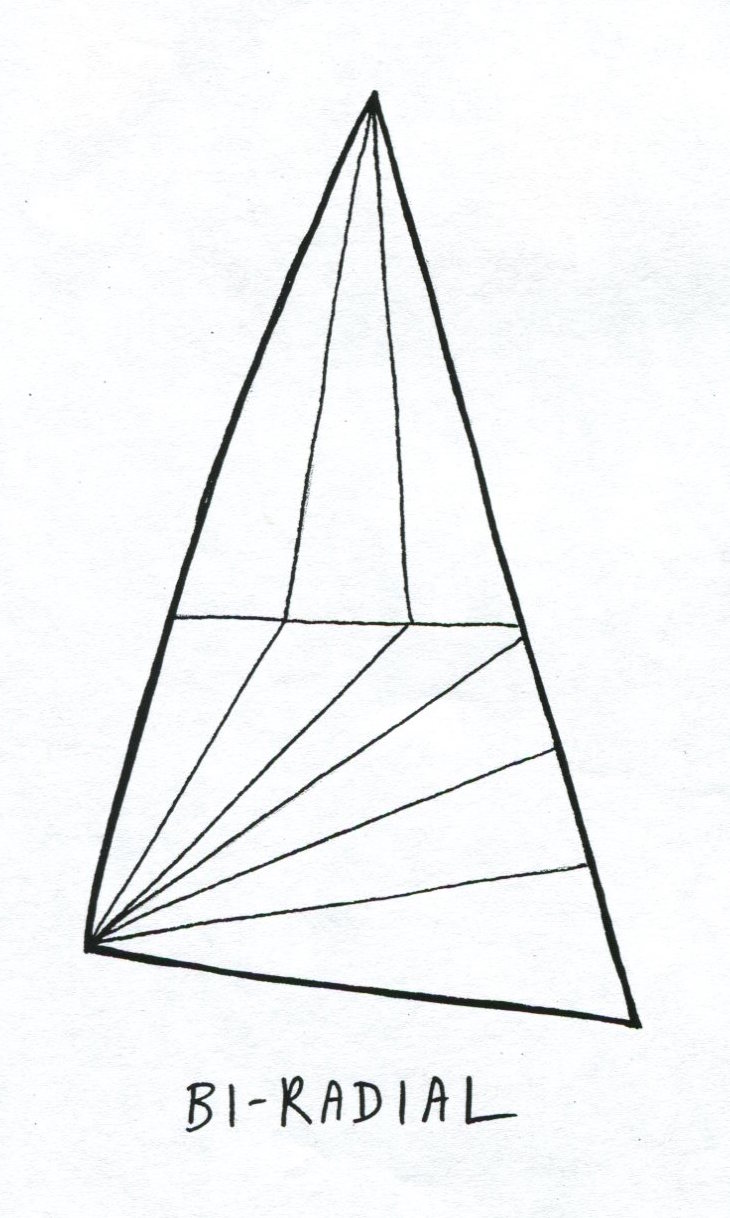 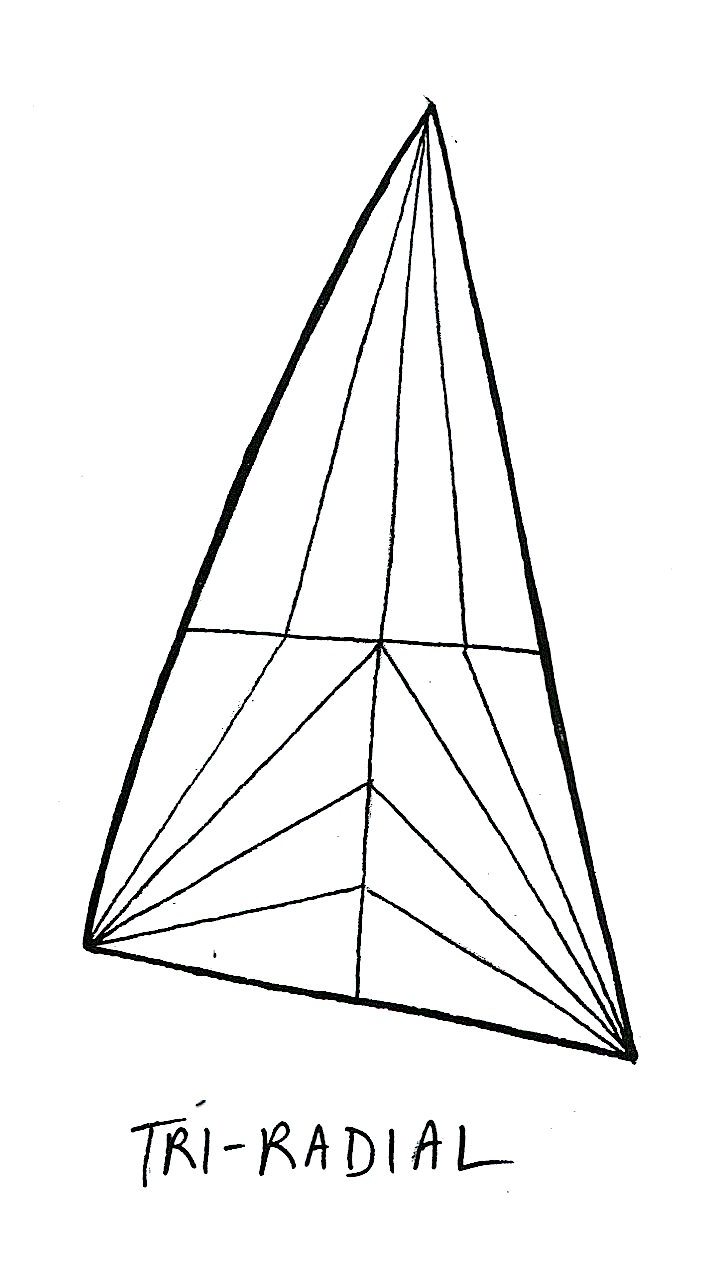 Radial sails are great if you are keen on performance, for they do hold their shape better. They are also more expensive and harder to build. The other drawback is they don’t like being reefed as much. They are cut to carry the specific loads generated when the full sail is deployed, but the load paths on a sail must inevitably shift position when its surface area is reduced. This is less of a problem for a mainsail with slab reefing, as the reefed tacks and clews can be reinforced with their own corner patches, but is more of a problem for a roller-reefed headsail. Most inshore racing sailors rarely reef their mainsails and change their headsails rather than roller-reef them, so radial sails make a lot of sense for them. Most cruisers, however, often reef their sails, which is one reason why most still prefer to stick to the more basic, less expensive, and more versatile crosscut patterns.

Deciding what material to use when building a cruising sail used to be a very simple matter. For many years, the only reasonable choice was Dacron, more generically known as polyester, which was first developed during World War II in Great Britain, where it is known as Terylene. Shortly after the war it was introduced to the recreational marine market as a sailcloth, where it quickly replaced Egyptian cotton as the material of choice for building sails for both racing and cruising yachts. For more than a generation, from the early 1950s well into the 1970s, sails made from woven Dacron cloth with panels stitched together with needle and thread represented the cutting edge in sailmaking technology.

Dacron is in fact a great material for making sails, as it is strong, durable, and easy to maintain. When woven into a cloth, however, it suffers from the same weakness as any other woven material. The fibers of the cloth are slightly bent or crimped as they pass by one another, and over time the crimp in the weave, as the expression goes, is elongated. This causes the cloth to stretch, which in turn causes a sail to lose its shape. 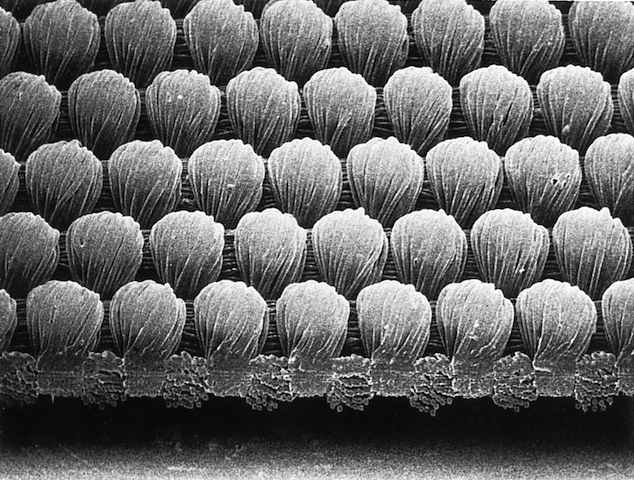 Dacron sailcloth up close and personal. Note how one line of fibers is crimped over the other

What normally happens as a sail is stretched out is that its draft, the deepest part of its curved surface, which is designed to be in the sail’s forward section, slowly moves aft. As the after section gets baggier, the sail becomes steadily less efficient. It is still curved–indeed, even more curved than it was before–thus it still develops a lot of power when filled with air. But because the sail’s foil shape is degraded, less of this power is translated into forward motion and more of it is wasted heeling the boat and pushing it sideways.

To combat the evils of stretchy woven cloth, sailmakers first introduced laminated sails back in the 1970s. The earliest examples, which were both crude and expensive, were of interest only to racing sailors, but since then laminated sails have greatly improved. Now an enormous variety are being made from various materials, and some of these make very good cruising sails.

Where a woven sail has a unitary structure, with its cloth constituting both the body and load-bearing skeleton of the sail, a laminated sail has a composite structure. The exterior layers of the laminate, usually a strong, flexible Mylar film, form the body of the sail and are glued to an interior layer of load-bearing fibers. Additional exterior layers of light woven cloth, usually some sort of polyester, can be added if desired to protect the inner layers from abrasion and UV radiation. 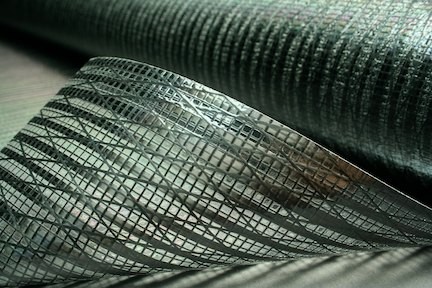 The fibers used in the load-bearing layer of the laminate range from polyester to carbon fiber to liquid-crystal polymers. In simpler sails the fibers are laid out symmetrically in a light biaxial or triaxial scrim; in the most sophisticated sails, known generically as structural sails, they are bundled into yarns or ribbons that are precisely laid out in long catenaries along the load paths of the sail.

As a general rule, the stiffer, more exotic load-bearing fibers are more expensive and have shorter life spans. Carbon fiber, for example, can fail suddenly if subjected to repeated bending and folding. PBO (an acronym for polybenzoxazole), which is probably the highest-performing sail fiber developed to date, but it quickly degrades in sunlight. Aramid fibers, like Kevlar, Technora, and Twaron, are brittle and don’t take well to flexing and flogging. These materials are well suited to high-end race boats, where performance is critical and sails are used for only a season, but they are generally inappropriate on a cruising boat. 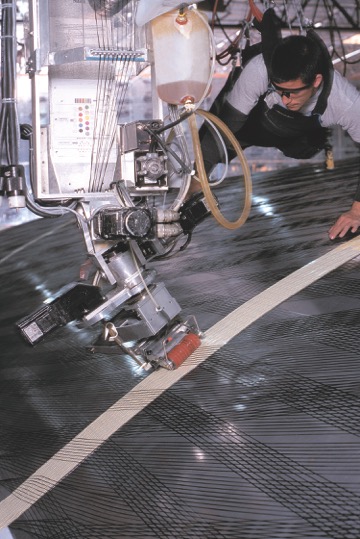 Building a structural laminated sail. The base is laid out in broadseamed panels on a bench curved to precisely match the curve of the sail and load-bearing fibers are laid over these

Pentex is a bit more expensive than simple polyester, but is still considerably cheaper than more exotic fibers. Of these the one that works best in a laminated cruising sail is probably Spectra, also known as Dyneema. It doesn’t mind flexing and folding too much, stands up well to sunlight, doesn’t weigh much, and is quite strong and stiff. It costs much more than polyester, but is still cheaper than other high-tech fibers. Vectran also has many of the characteristics of Spectra, but is not as UV-resistant and thus requires a barrier layer or coating to protect it from sunlight.

This is an over-simplified assessment of the types of laminated sails currently available (there are also many hybrid sails that blend different load-bearing fibers), but it should give you some idea of how complex the subject can get. If you want to put sails like this on your boat, do your homework. There’s a lot to learn. If instead you are tempted to throw up your hands in confusion and cleave to woven Dacron sails, you are in good company. Dacron cloth is still the most popular sail material used by cruisers and is, indeed, a worthy substance.

The biggest downside to laminated sails is that they simply don’t last long. They are much lighter than woven Dacron sails and hold their shape much better over the course of their useful life spans, but in many cases that won’t be much longer than five years. They need to be babied, and if you use them hard they may well only last a couple of years before they delaminate.

Woven Dacron sails, by comparison, are nearly indestructible. You normally can expect them to last at least 10 years, and if you pamper them, they may go as long as 20. Unlike laminated sails, they can be repaired and recut if necessary. The only problem, however, is that for much its useful life span a woven Dacron sail will not be precisely the shape it was designed to be. Inevitably, the shape of the sail degrades over time and becomes increasingly less efficient.

0Shares
Cruising Sailboatssailmaking
Previous PostMAINE COAST CRUISE: Up and Down the Damariscotta RiverNext PostTHE PERFECT DINGHY: Does It Exist?