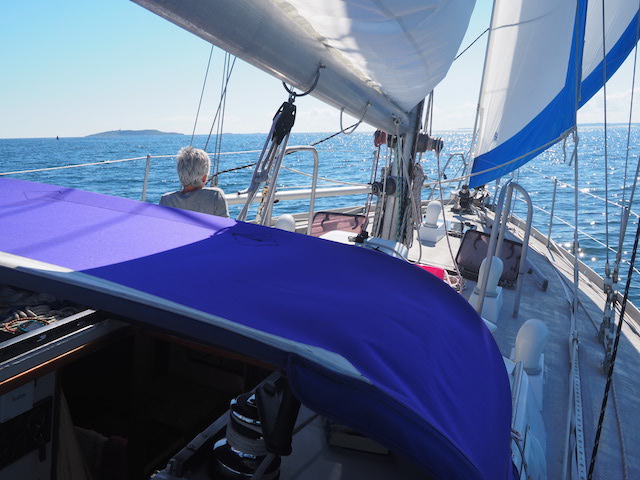 During our “adult cruise” (i.e., sans offspring) last summer, Clare and I harbored wild ambitions of ascending the Damariscotta River, but suffered a lack of breeze (and an intolerance of motoring) so settled instead for a perambulation about Knubble Bay and the lower reaches of the Sheepscot River. This summer, having once more disposed of children, I was determined to try again, and we were fortunately favored with some brisk wind early on.

This was last Tuesday. The cruise actually began the day before, when we departed Portland late Monday afternoon, at which point our sole goal was to a) get as far east as possible in the few hours we had; and b) spend the night somewhere not too far north, so as to get back in open water as quickly as possible the following day.

Point B is a recurring issue when cruising the Maine coast, as most of the protected harbors and anchorages are hidden northwards up rivers, sounds, and bays that take some time to traverse. And, of course, it doesn’t help that the prevailing summer wind is southerly. In this case, we had a fine sail in the afternoon sea breeze over to Wills Gut, which we have discussed before and is not too far up the east side of the Orrs/Bailey Island peninsula.

The forecast for Tuesday was for a strong squally southerly, 15-20 knots with gusts to 25, devolving into major rain and thunderstormy unpleasantness late in the day. Our plan therefore was to blow out of Wills Gut in the early a.m., use the breeze to our advantage, and hopefully arrive at the mouth of the Damariscotta before things got too bleak. This worked like a charm. Except the wind was more southeast than south, so we had to do a little motor-tacking to get clear of the crunchy obstructions directly east of Wills Gut, and then once sailing had to throw in a pair of tacks to hitch out of the east end of Casco Bay and around Small Point.

From Small Point on, however, we had a great ride on a fast close reach in grey tumultuous conditions, right across the mouths of the Kennebec and Sheepscot Rivers and the wide expanse of Booth Bay. The rain started spitting just as we pulled into Christmas Cove and picked up a vacant mooring. By the time we were settled in nice and snug it was pouring down with thunder sounding ominously in the distance. 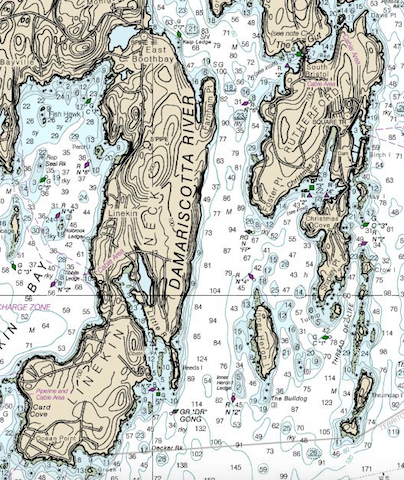 The river entrance, with Christmas Cove on the east bank, followed by South Bristol just upriver. Though it is small, we had no trouble finding a mooring at Christmas Cove. Anchoring, however, would be out of the question. I’d never been here before and was pleased with it, as it, too, can serve an easy-access refuge when transiting the coast east and west 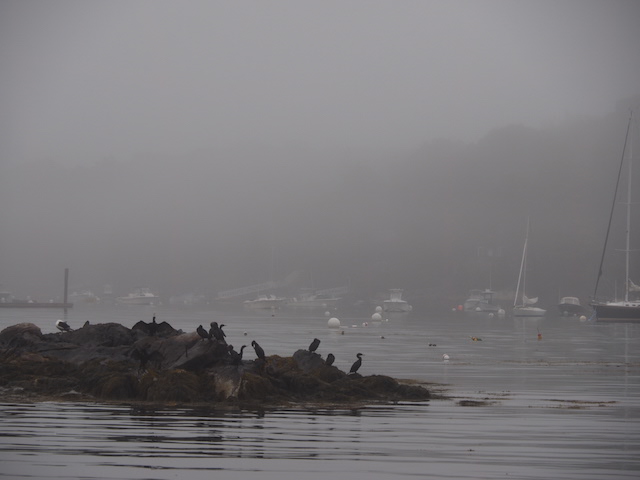 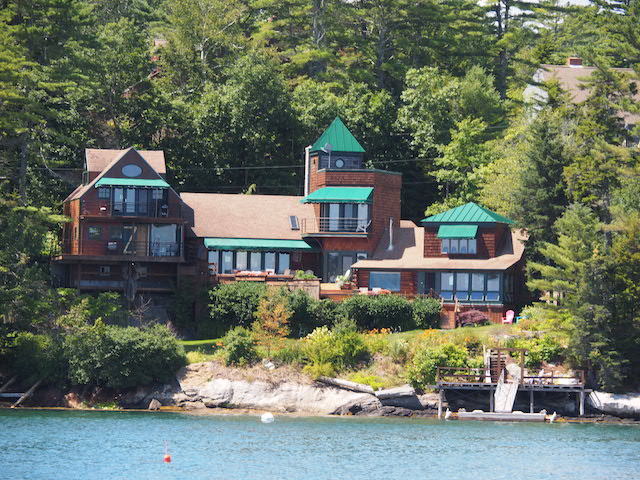 A preposterous summer home. To me it looks like a super-sized child’s playset 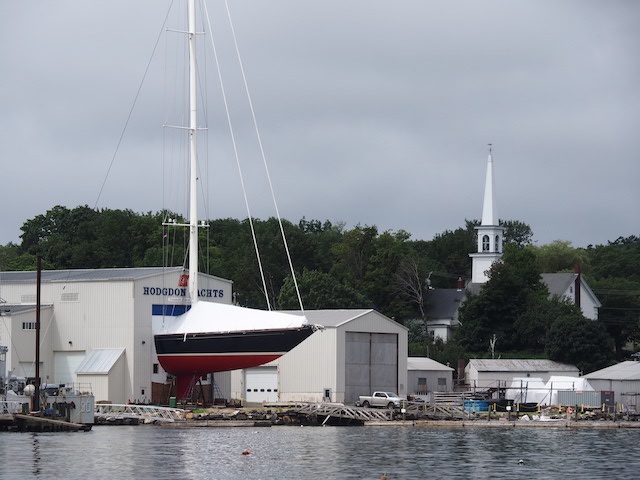 The Hodgdon Yachts yard, with a superyacht protruding from its shed

We had heavy fog the next morning, but by the time we’d been ashore for a walk to South Bristol and back, it had all burned off and conditions were propitious for an ascent of the river proper. Except there was no useful breeze, which you do have to expect when climbing and descending Maine rivers in the summer. In these instances even serious cruising sailors may be forgiven for paying homage to the Gods of Internal Combustion.

I was disappointed to see that the river bank, in its lower reaches, was studded with gaudy McMansions, most of recent vintage. It was interesting, however, to drift by the famous Hodgdon Yachts yard in East Boothbay, where so many excellent vessels (including my old friend Constellation) have been launched over the decades.

Soon enough, however, the McMansions dwindled away, and the middle portion of the river, I thought, was perfectly beautiful with relatively few houses in sight. One had to be careful when admiring the scenery, however, as the lobster-pot-to-open-water ratio was greatly increased here, which caused me to wonder if lobsters, like me, have an aversion to McMansions. 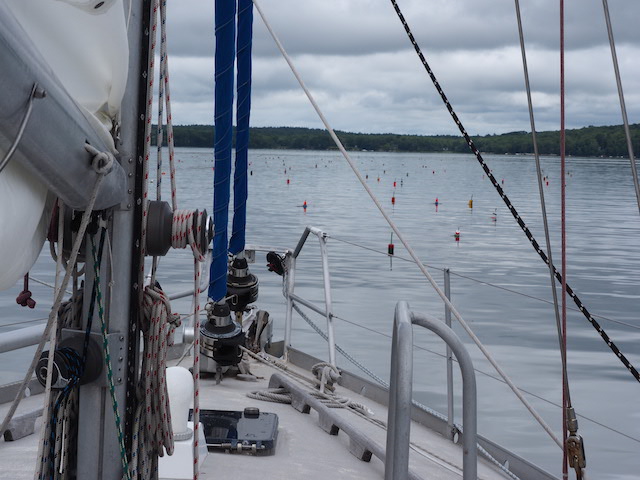 Finally, in the river’s upper reaches, where things shoaled up dramatically on either side of the navigable channel, I was very surprised to see great rafts of aquaculture gear staked out along the shore. These, it turned out, were oyster farms. The river when healthy is an ideal environment for oysters, as is witnessed by the prehistoric shells middens found in the area, the post-prandial waste of aboriginal inhabitants who feasted on shellfish here for many generations before Europeans came to muck things up. For hundreds of years the river had been too foul to support oysters, but now is clean again, and both “wild” oysters and commercial oyster farms are booming. 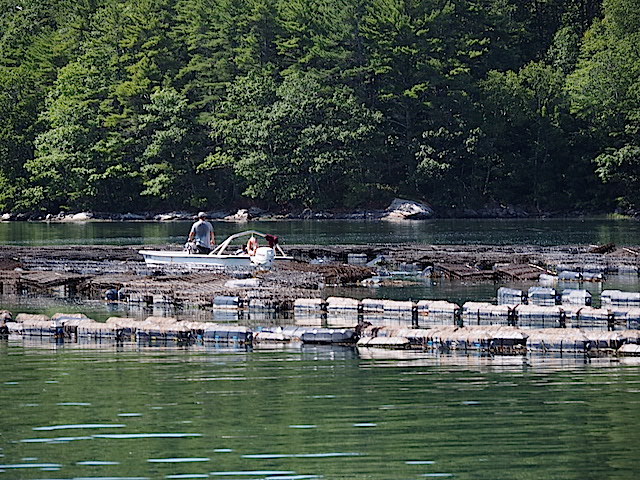 An oyster farmer surveys his crop 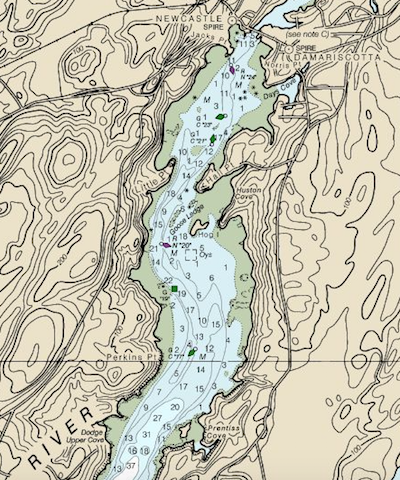 From Prentiss Cove north to the head of navigation at the twin villages of Newcastle and Damariscotta the river is full of oyster gear, mostly off the west side of the channel

Of course, the raison d’etre of a foray up this river are the twin communities at the end of it. Downtown Newcastle/Damariscotta, which spans the river, is just small enough to be charming, and just busy enough to be interesting, and collectively makes a great destination. 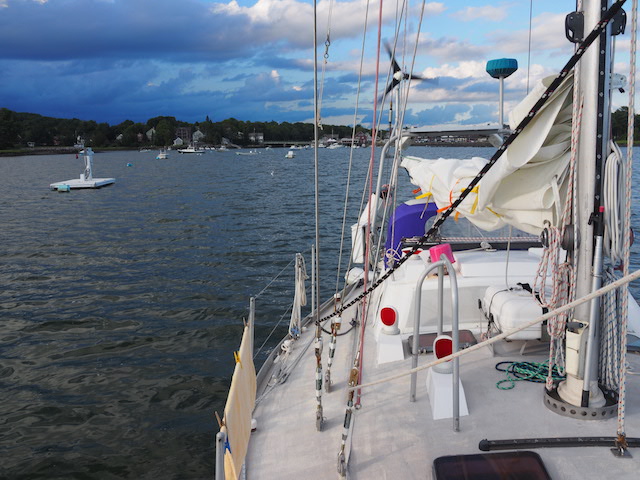 The twin villages, as seen from Lunacy’s mooring the afternoon of our arrival, with a thunderstorm rolling from the west 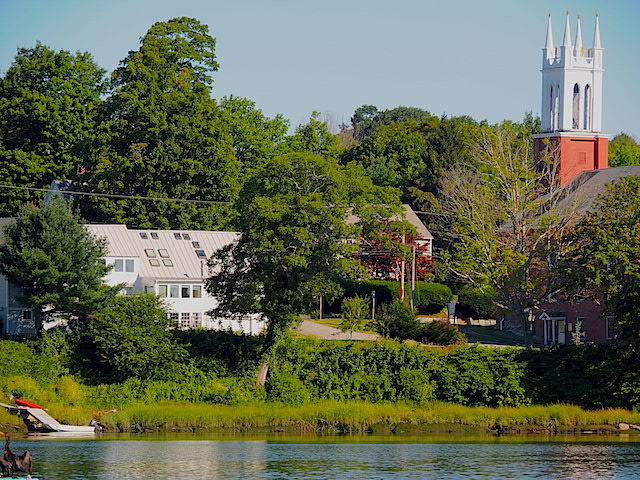 Nigel Calder’s house is on Newcastle side, seen here to the left of the church, under the tin roof with all the skylights. We gave a Nigel a call when we arrived, but he was off on his own boat cruising in the Scilly Islands over in the UK. He invited us to use the house anyway. Contact me if you want to know where the key is hidden 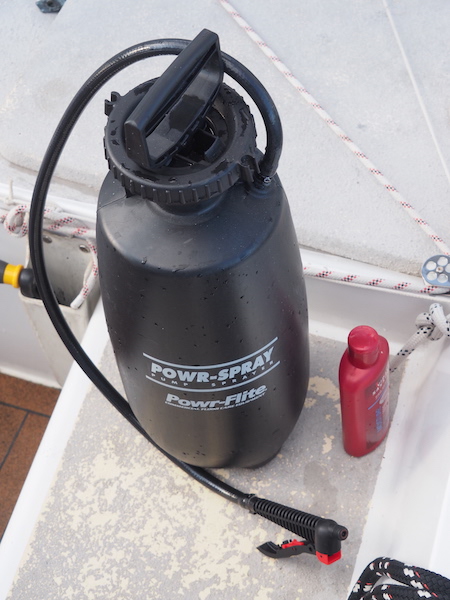 P.S. I elected not to shower at Nigel’s house and instead used this device. Available at Home Depot stores everywhere 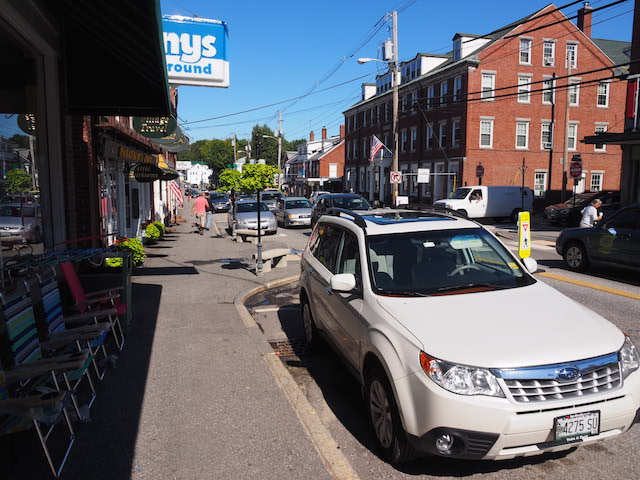 The main drag downtown. There is a great bookstore, a tiny movie theater, a great pub, some interesting stores, and a couple of genuinely good restaurants 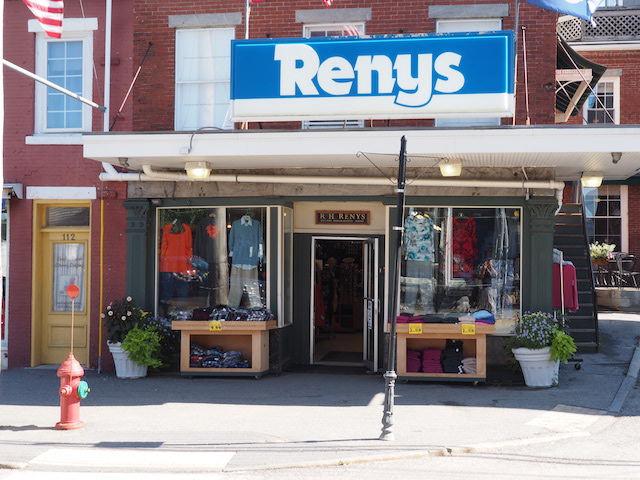 Most importantly, if you are a Maine discount-retail aficionado, Damariscotta is home base for Renys! 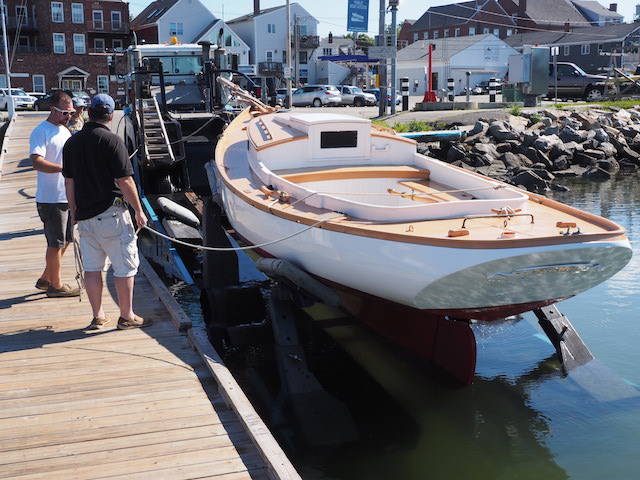 Interesting doings down by the town trailer ramp. We saw this cool Friendship sloop get hauled out the morning after we arrived. Its new owner is trucking it down to Hingham, Mass., to take the place of his diminutive Beetle Cat

After an evening and a full morning debauching in the fleshpots of this teeming hive, we headed back downriver, motoring all the way again, to crack open headsails at the mouth of the river, where we short-tacked in a growing southwest sea breeze across the broad mouth of Booth Bay and thence further west (see photo at the top of this post), all the way to western Casco Bay, where we cruised up Middle Bay, twixt Harpswell Neck and Whaleboat Island, to bear witness to the recent absence of my grandfather’s old house in South Harpswell. 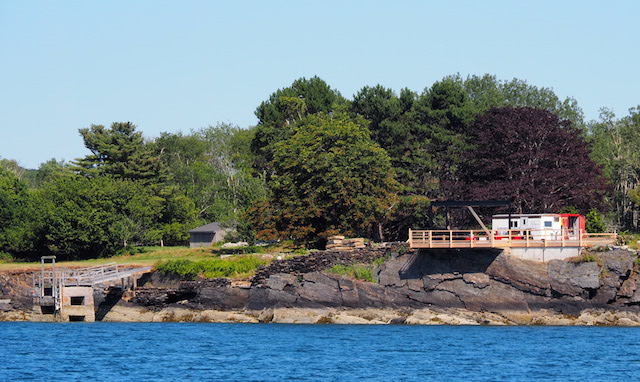 The construction site where my grandfather’s house used to be. I fear a gaudy McMansion will be erected in its place 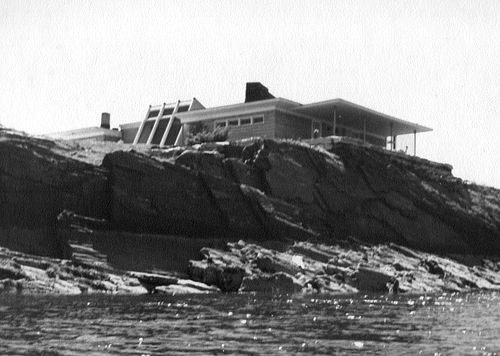 The house before it was absent

We ended up, our last night before heading back into Portland, moored off the Chebeague Island Inn, where (alas) they did not have enough food to feed us. We were happy enough to eat aboard, however, and enjoyed one last quiet night afloat before sputtering back to civilization under power very early the next morning. 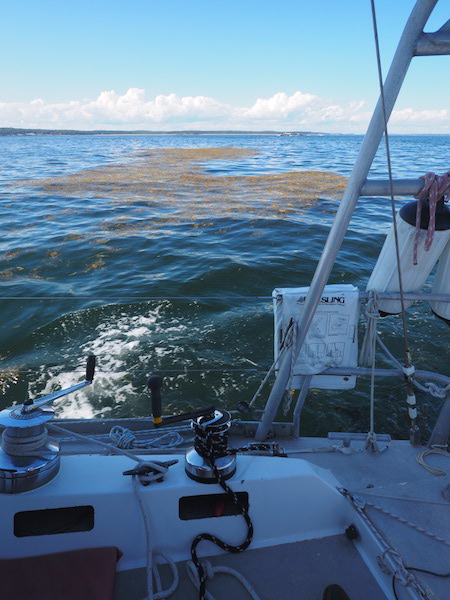 One of many weed rafts we personally witnessed last week

Postscript: I wanted to say something about the great rafts of rock weed that are drifting about the Gulf of Maine this summer. They’ve been a real problem! I’ve heard lots of reports of engine cooling systems getting strangled by the stuff. Of course, I can’t help but remember the greats rafts of Sargasso weed that plagued poor Lunacy on her way to and from the Caribbean last winter.

What’s with all the frickin’ weed? It seems seaweed everywhere is organizing itself, and this could have grave implications for those of us who like messing about in boats.