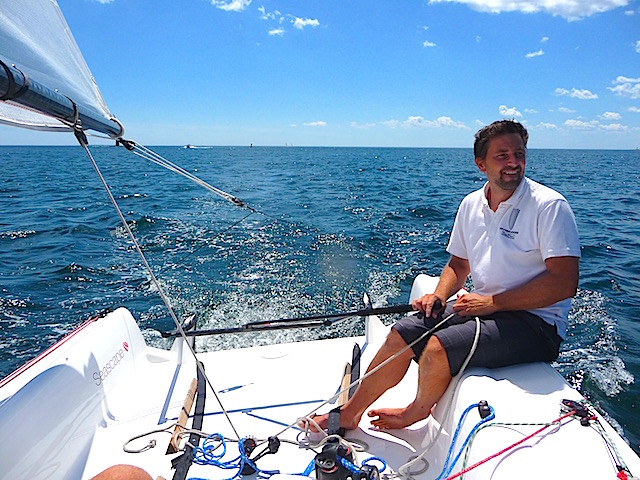 How’s this for convenience? I get the word from SAIL HQ that I should look into test-sailing the Seascape 18 from Slovenia, recently revealed on these shores, and it turns out the new U.S. rep is based in Kittery, Maine, mere footsteps from my home. Even better, on arriving at the anointed moment last Friday at Pepperell Cove, where said rep, Toralf Strand, a tall gangly Norwegian fellow, has assembled both a Seascape 27 and 18 for test-sailing by prospective buyers and this one journalist, it turns out I’ll be sailing with Andraž Mihelin (see photo up top), one of the masterminds behind the whole Seascape concept.

Which is as follows: take the current hot monohull-racing hull-form–fine plumb bow, wide hindquarters, plus hard-chined topsides–and insert one super-simplified performance rig with simplified controls so that mere mortals can have fun knocking around and sailing fast without getting the pants scared off them.

Seascape, a new company formed by two hot-shot Mini-Transat racers (that would be Andraž and his buddy Kristian Hajnšek), introduced the 18 just over five years ago in Europe and already they’ve sold well over 300 boats and have fostered a burgeoning one-design racing scene. The 27 followed last year and looks to be just as successful. (You may recall I sailed the 27 last fall after the Annapolis show; you can read my review in the current print edition of SAIL.) 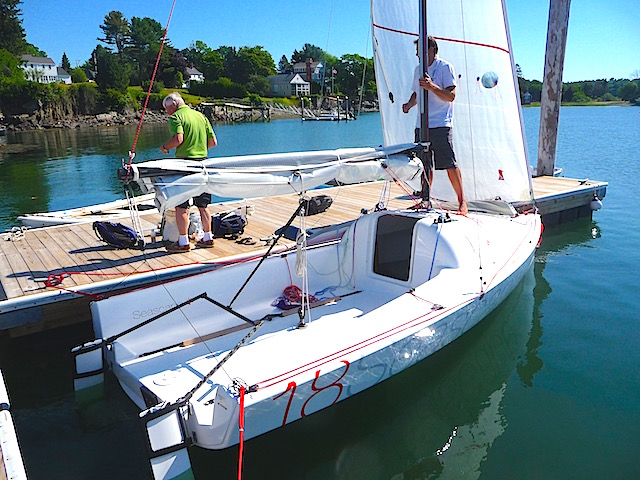 On the dock at Kittery. Note the aggressive hull form, a Volvo boat in miniature. Inside the cuddy cabin there’s a full-length double berth (plus a simple winch for controlling the centerboard). Note, too, the simple mainsheet controls: no traveler, just blocks and a bridle 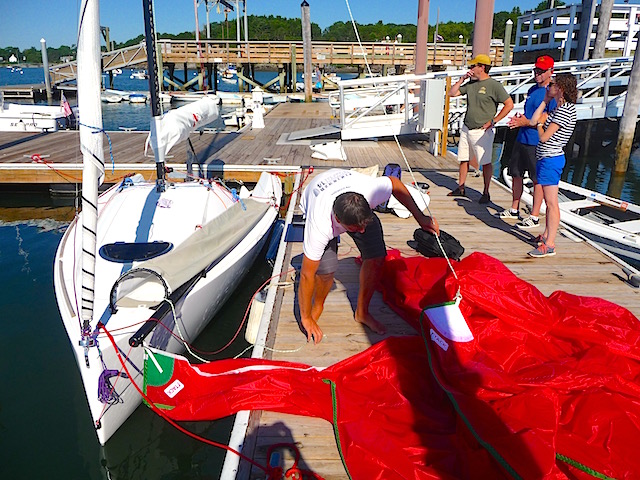 Andraž loads the asymmetric spinnaker into its deck sock. It flies, of course, from the end of that long retractable bowsprit

Sailing with Andraž is like getting the gospel straight from the prophet’s mouth. He is alive with enthusiasm not only for the boats he builds, but for a whole new approach to having fun on sailboats that go fast.

“The idea behind Seascape,” he explains to me as we shoot away from the town dock in Kittery, “is to have 80 percent of the fun of sailing a Mini with 20 percent of the work.”

Convenience-wise, the boat is just that. The tubular carbon-fiber mast, which weighs just 30 pounds, is supported by a fractional headstay and two straight shrouds with no backstay or spreaders. Underwater foils consist of an easy-to-control centerboard (or swing keel, if you prefer) and two retractable rudders in cassettes. The whole boat weighs just a tad over 1,000 pounds, and it takes just a little over 20 minutes to get it from a trailer into the water fully rigged. 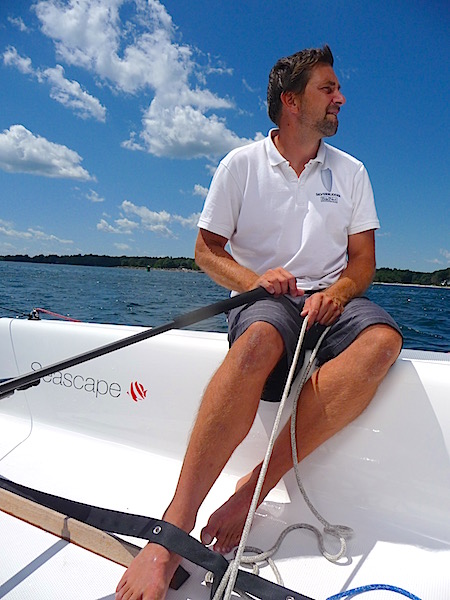 Andraž on the helm. He truly is a man with a mission

And yes, it is fun to sail. We’re having a blast cruising around off the mouth of the Piscataqua River while Andraž fills my head with his vision of what he wants to do with these boats. Races where you don’t call the course until you see what the conditions are, so you can be sure of making it interesting. Round-the-island time-trial competitions where skippers pick their start times. Global online “best game” competitions where skippers on boats with transponders post and compare their best 500-meter speed runs. These are all things he is already doing, or plans to do in the future.

Plus, of course, there is cruising, and he regales me with the tale of a young Austrian couple who sailed their Seascape 18 down the Danube River from Vienna all the way to the Black Sea, out the Dardanelles, through the Greek archipelago, and up to the top of the Adriatic, from whence they trailered it home to Vienna and thus completed a circumnavigation of southeastern Europe. 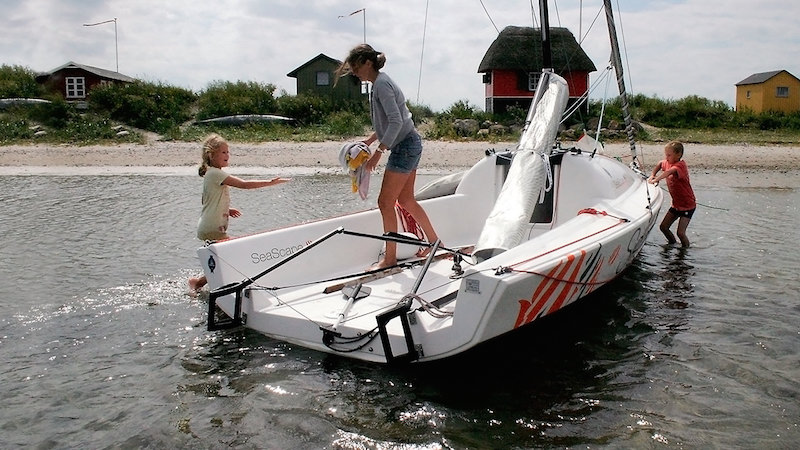 Cruising mode. You can easily beach the boat, plus there’s a simple tent you can pitch over the cockpit 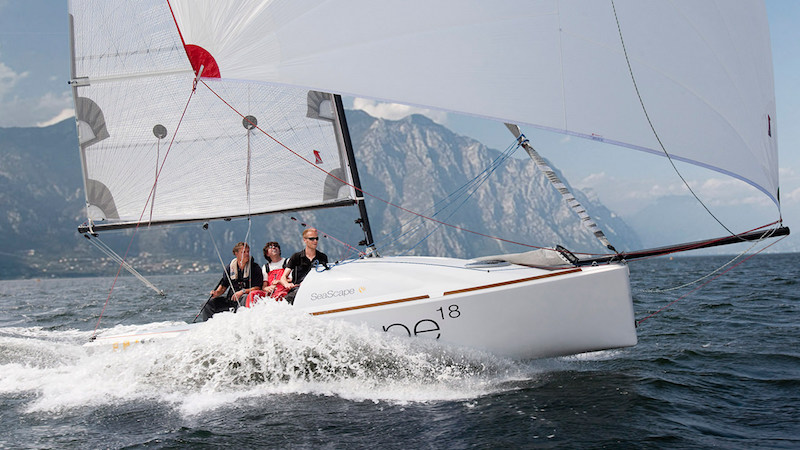 Racing mode. More fun than humans should be allowed to have

Meanwhile, we’re seeing ideal test conditions. A building breeze that runs the gamut from 8 to 20 knots in gusts. We’re pulling the A-sail up and down–no fuss, no muss–in and out of its deck sock with its continuous halyard. Hitting over 10 knots on a hot reach. Cutting apparent wind angles well inside 25 degrees while sailing closehauled to weather. And when the gusts come through the top of the big square-headed main falls away, the mast bends a little in the right direction, and everything stays under control.

No panic. No near broaches. Nothing but the good stuff. 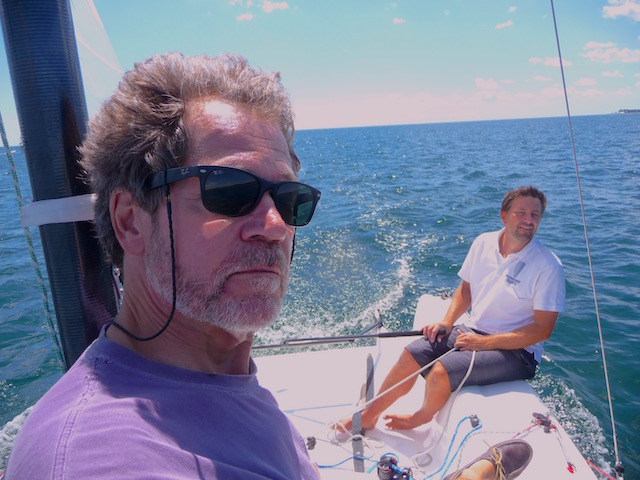 I’m thinking to myself: I like this guy. I believe in him. And I certainly like this boat. 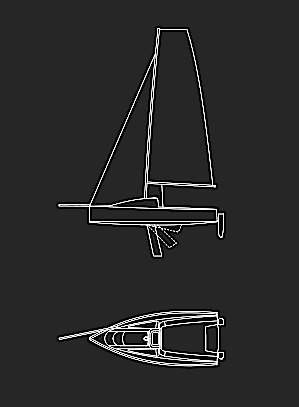 Can’t wait to write it up for the comic.