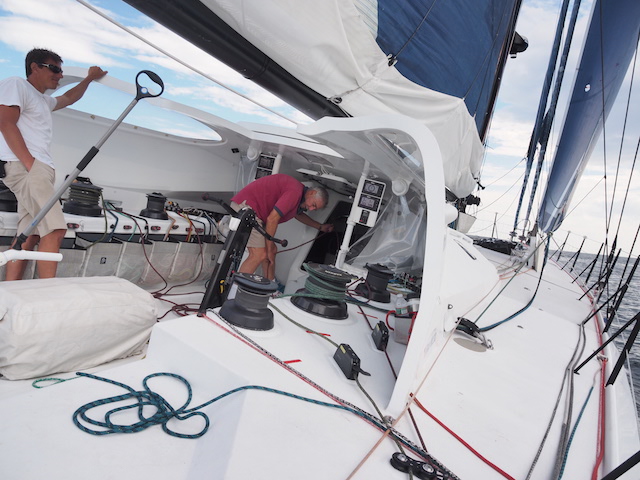 I narrowly missed my last chance to sail on an Open 60, way back in 2001 at the Heineken Regatta, when Josh Hall and Gartmore turned up a last-minute no-show due to family issues, so I was pretty psyched about getting aboard Great American IV (ex-Mirabaud) with her skipper Rich Wilson late last week. This was his first outing on the boat this summer, a delivery jaunt from Maine Yacht Center in Portland to her home mooring in Marblehead, a distance of about 100 miles. Also onboard was Jonathan Green, a local Massachusetts racing sailor (on the left in the image up top) who is assisting Rich in tuning up the boat for next year’s Vendeé Globe start in France.

Unless something pretty dramatic happens, Rich, who last ran (and finished!) the Vendeé Globe in 2008-09, will (again) be the only American sailing in the race. At age 65, he will also be the oldest competitor in the race’s history, a fact he doesn’t necessarily like to dwell upon.

I’ll be doing a full profile on Rich for SAIL Magazine, which hopefully will cast some light on exactly why it is a severely asthmatic senior citizen who has nothing left to prove to anyone when it comes to high-performance long-distance sailing would again want to subject himself to the gross misery of competing in the Globe. So be sure to look for that. Meanwhile, what I want to tell you about right now is the boat.

GA4, as she is colloquially referred to, is a rather detuned version of what the very best, most well-financed VG competitors will be sailing next year. She is nearly 10 years old and lacks several features (most noticeably deck spreaders, for example) found on the most competitive contemporary IMOCA Open 60s. But still sailing on this boat was a real eye-opener for me.

Not that we did all that much sailing. We had little to no breeze when we left Portland early Friday morning, so much of the trip was just motoring, in which mode GA4 isn’t any faster than a garden-variety cruising boat. But the wind piped up a bit in the afternoon, from the south, so we did get in several hours of closehauled windward sailing in light to moderate conditions. 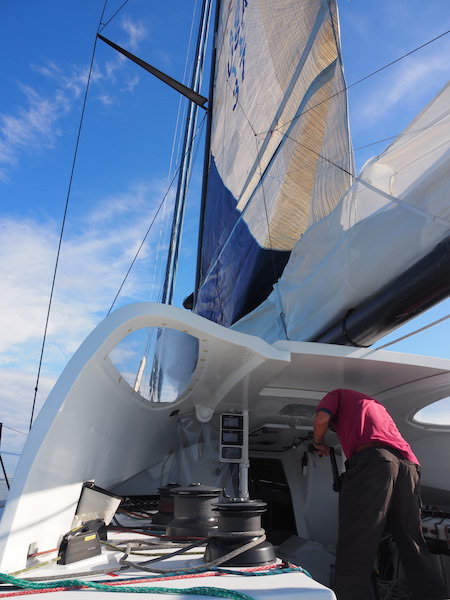 Job one, of course, was getting the mainsail up, which we did as soon as we were clear of Portland Harbor. And it is a job! The sail weighs well over 400 pounds and even with a two-part halyard and a big winch with a grinding pedestal it is not easy hoisting it. We all three took turns grinding, and it took a good 15 minutes to raise the sail. In the heat of battle, of course, Rich (seen grinding above) will be doing all this on his own 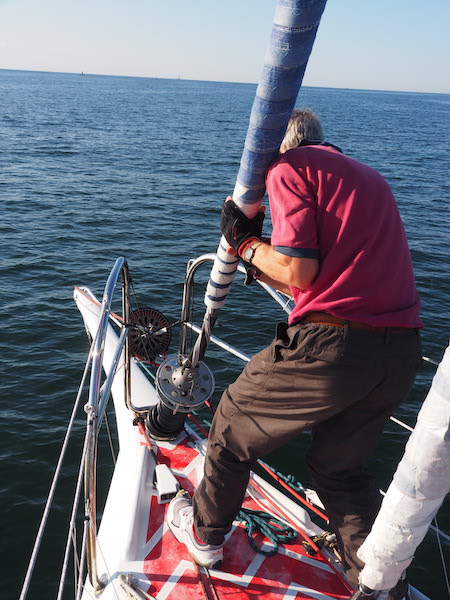 As we expected light conditions, we also hoisted the genoa, which flies on its own luff on a permanently installed furling drum. Part of this job involves banging on the rolled-up sail so as to free up the skinny high-modulus line that runs on a multi-part tackle inside that rubber boot you see under the furler. This ultimately is what tensions the luff of the sail once it is hoisted 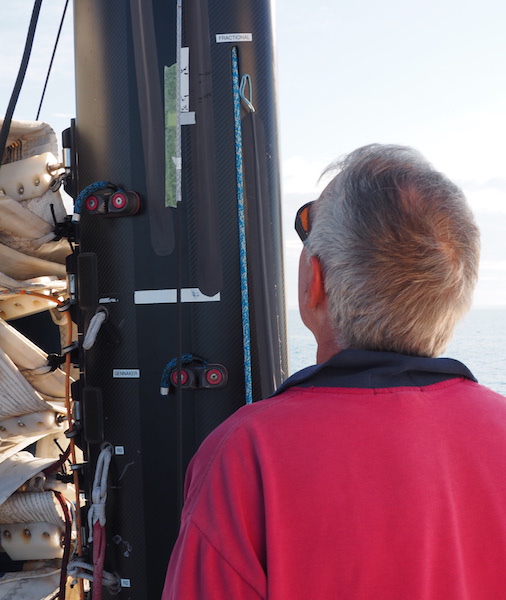 The reason you can’t tension the luff of the genoa with its halyard is because there’s a halyard lock up top that locks the head of the sail in place once it’s hoisted. Here you see Rich examining the taped-on marks that show him where the halyard locks on and off. And yes, that skinny little grey line running past the tape is the genoa halyard! Since the halyard doesn’t carry any working loads, just the hoisting load, it need not be very big. Which saves weight in the rig, of course. Also, if the sail’s locked off, you never have to worry about the halyard stretching under load. The disadvantage is you have to worry about getting the lock to engage and disengage when you want it to. In our hoist here it took several attempts to get the sail locked, because its skinny halyard was quarreling with another skinny halyard way up high. My biggest fear, of course, would be about not being able to unlock the sail and get it down when required 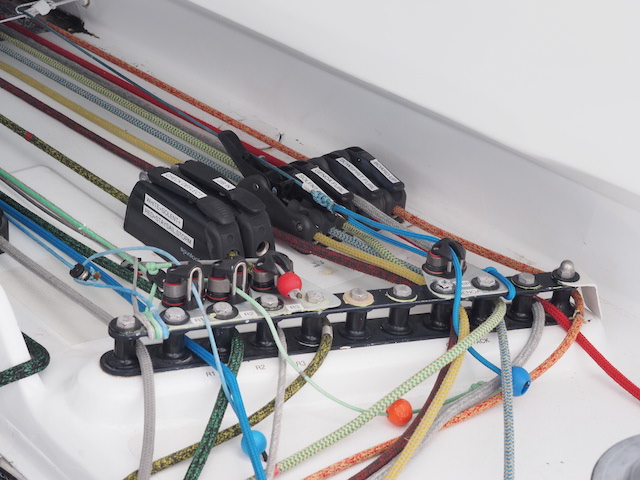 The genoa halyard isn’t the only working line with fiddly remote controls to worry about. The main halyard also locks off, and here you see small control lines for remote under-deck clutches for the mainsail reef lines. Even to an experienced sailor, the purpose of many of these more esoteric controls is not immediately self-evident 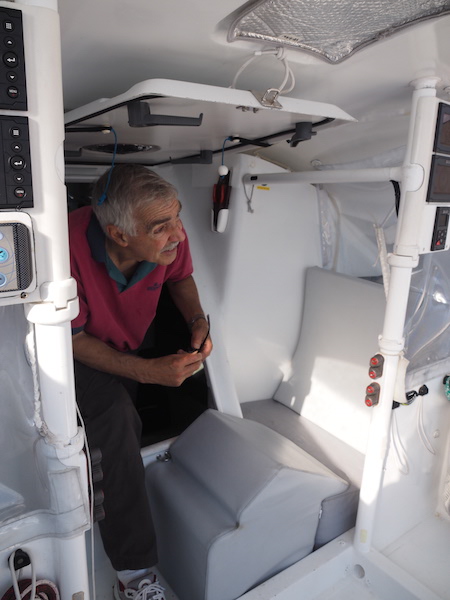 This is not a very ergonomic craft! Here you see Rich crawling through the companionway, and you do have to crawl. Unless you’re very short (Rich is about 6 feet), there’s no quick and easy way to slip through this hatch, which frankly would drive me crazy if this were my boat. Note also the nesting cushions on the right that make for a sheltered cockpit seat you can fall asleep in if necessary. These, of course, can be set up on either tack 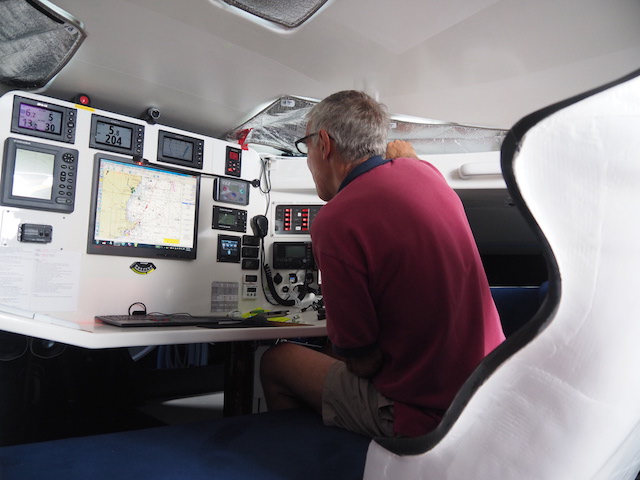 Here’s Rich at his nav desk, which, other than when lying in a pipe berth, is the only comfortable place to be inside the boat. Due to all the ballast tanks onboard there’s no place to stand up straight (except right at the foot of the companionway, and this was a modification Rich had to make), so again you’re doing a lot of crawling around when you’re moving about the interior 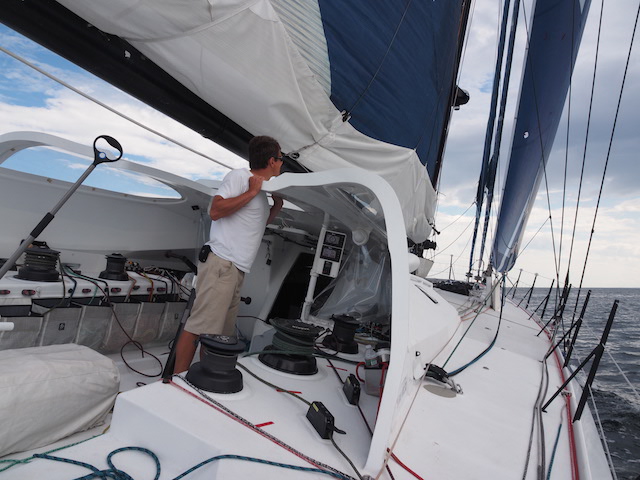 This is Jonathan minding the deck as we barrel along close-hauled on port tack. Note all the line bags. You spend a lot of time tidying up cockpit lines on this boat! Tacking is also a major procedure. During our sail we had to manage the canting keel, the offset daggerboards, and the running backstays, as well as the sails when tacking, but didn’t have to fuss with the ballast tanks, as we weren’t using those. And because we were flying the big genoa, which can’t easily tack around the intermediate fixed headsails, we had to bear away big-time before each tack to roll up the sail before steering through the wind and unrolling it again. Bearing away to furl headsails is evidently a common tactic on these boats 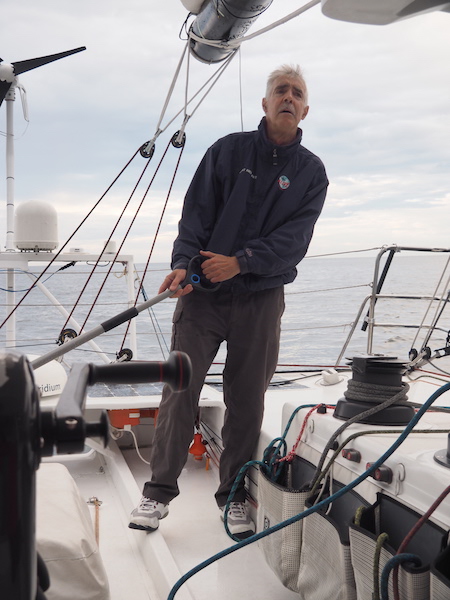 Here’s Rich hand-steering, which is not something you do a lot of when sailing the VG, unless something has gone wrong with your autopilot or instruments. I got in a fair amount of hand-steering myself on this jaunt and found the steering position to be not too comfortable on a long-term basis. It’s OK for short stints, but after two or three hours on the helm I would find it challenging. The steering was precise, but with a bit of friction in the system, due to the twin rudders. Also, this is a big boat to control with a tiller! 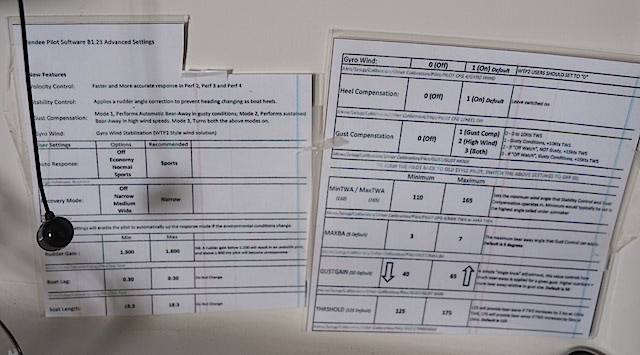 So, of course, your autopilot is very, very important. A lot of the test-sailing on these boats involves tuning the pilots, which are incredibly sensitive and sophisticated, with multi-axis gyros to help them perceive what the boat is doing in three-dimensional real time. When properly tuned a good pilot will steer as well as, or better than, a human helmsperson and will automatically compensate for passing waves, wind gusts, heel angles, etc. Here you see the cheat sheet for fine-tuning Rich’s pilot while sailing. During his last VG campaign Rich lost his masthead wind instruments, which made it impossible for his pilot to steer to the wind, which in turn cost him a lot of sleep, as he had to keep checking to see if the wind had shifted. This time he’s carrying a back-up deck-level wand with a wind sensor on it as insurance 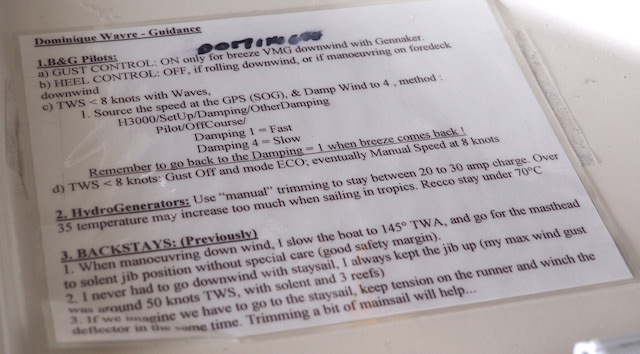 And here’s a list of tips from the boat’s previous skipper, Dominique Wavre. The top items, you’ll note, concern the autopilot 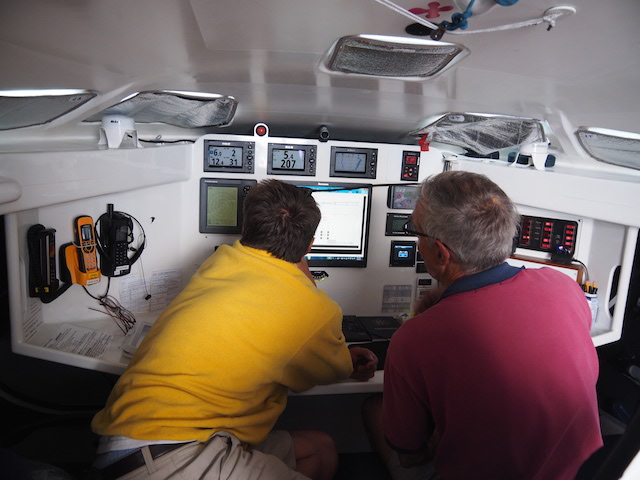 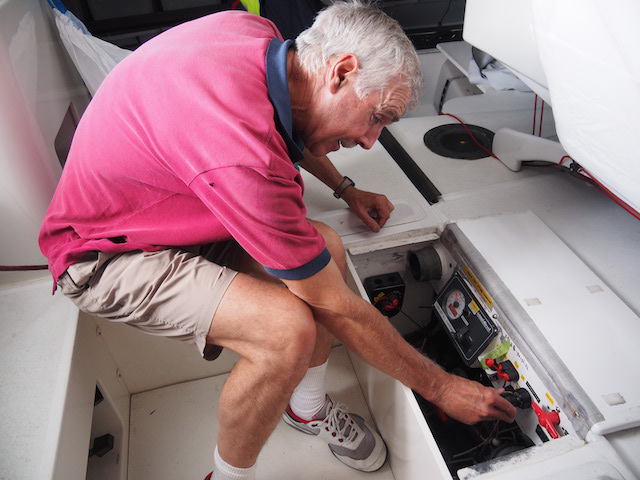 Rich ponders the engine instruments. The engine has had a persistent problem and suffers strange power fluctuations while running. The cause so far remains unknown. That black knob Rich is fiddling with is a remote throttle control

All in all, I’d say Rich has his work cut out for him! If you sail in the Marblehead-Salem area keep your eyes peeled for him when you’re out on the water. He and Jon hope to get in a lot more test-sailing before the season is finished.

For a detailed description of the modifications made to GA4 after Rich acquired her, see this previous post here. Note that much of the electrical and electronics work had to be redone after the boat was struck by lightning last September.