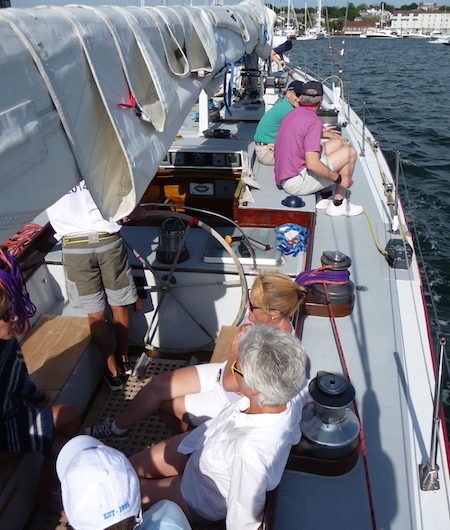 I should have learned this lesson a number of years ago, but now I’m quite certain I have learned it for good. For the second time in my life this past Friday I was lured aboard one of the several 12 Meters that sail out of Newport as part of a business team-building/schmoozing exercise and made the grave mistake of raising my hand when our skipper asked if anyone coming aboard had any sailing experience. Never again!

Not that it’s not cool sailing aboard these old 12s. They are beautiful, graceful vessels, and it has always warmed my heart that so many of them have been so well preserved and maintained. I’d be very happy to sail on one again, but next time for sure I want to be one of those people chatting gaily in the cockpit while someone else does all the work.

In this case, aboard American Eagle–wood hull, built in 1964, designed by Bill Luders, formerly owned by Ted Turner–I was asked to manage the mainsheet, though I certainly was not entrusted with it. Having received numerous picayune and contradictory instructions on how to handle the sheet and winch, as though I had never seen or touched such things before, I spent the next several hours enduring a withering critique of my performance.

My biggest sin as a 12-Meter mainsheet handler was not constantly treating the sheet and winch as if they were always carrying tremendous loads. Instead I foolishly relied on my ability to judge loads on lines and the habits formed of some four decades of experience, and when the sheet was under very little load with too many wraps on the winch, and I was asked to ease it quickly, I would quickly flip off a wrap or two before doing so. Only to receive my umpteenth lecture on how to properly take line wraps off a highly loaded winch.

Even worse, when sailing closehauled on starboard tack, I had a very bad tendency to want to sit in a comfortable position facing the winch so I could easily manage it, with the sail in view, and with my left foot well braced against the leeward rail. Instead I was repeatedly ordered to assume a very uncomfortable prone position with both feet braced to leeward lying on the deck on my side below the winch, where I could not see it or the sail or easily manage the sheet at all. 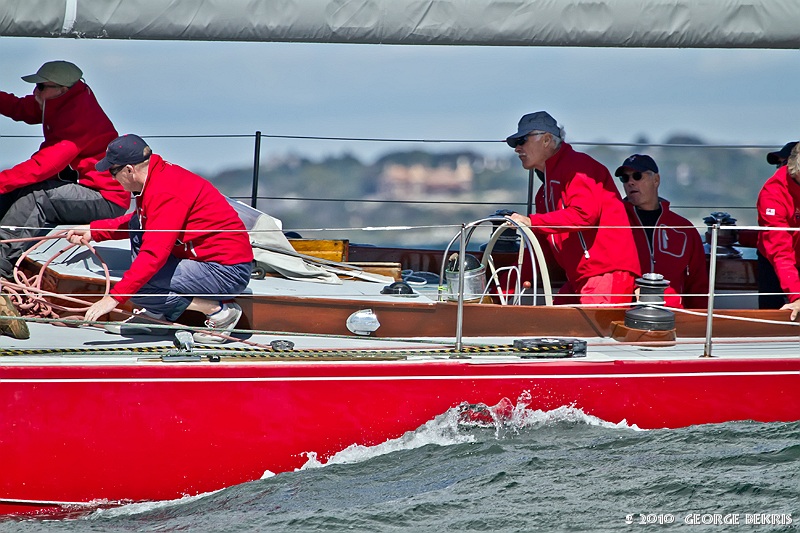 Ted Turner steering American Eagle. The next man forward of him, crouched on the edge of the coachroof, is tending the mainsheet in the position I was forbidden to use

By the end of the day my back and shoulders were tied up in a chiropractic pretzel and were screaming in pain.

Of course, I realized what was going on here. Our skipper likely deals with thousands of guests every year, most of them total strangers, and has no idea whether they are idiots or not, and so, to keep them safe, must assume they are. Hence the mortal fear of heavy winch loads, even when the winch is lightly loaded. And I can only assume the absurd position I was ordered to assume was calculated to both a) keep me from slipping overboard, and b) keep my head well away from the boom. 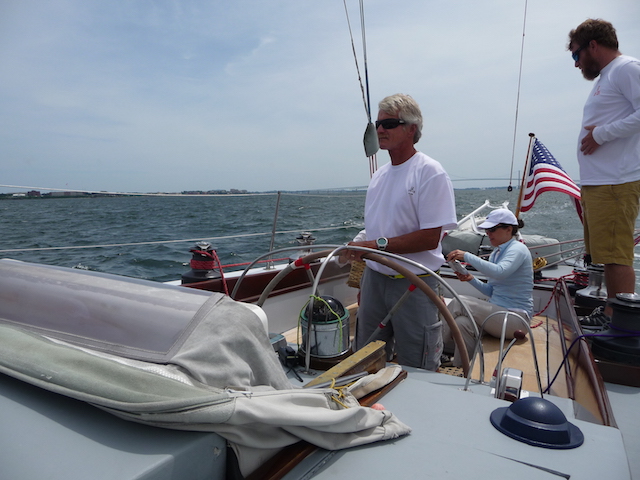 The man in charge

Other issues were more mysterious to me. For instance, during the 10 minutes I was graciously allowed to steer the boat, our skipper insisted I steer from the windward side, where I couldn’t see the jib’s telltales, rather than the leeward side, where I could. (Another overboard fear, perhaps?) Meanwhile, he stood to leeward, watching the telltales, and was constantly ordering me to steer up or down.

Also, he seemed to think disaster would somehow ensue if I took pictures belowdecks while the boat was being docked.

While not very satisfactory, this at least was a superior experience to my last outing on a 12, aboard Courageous, where no one seemed particularly concerned with keeping my head away from the boom. In this case, having eagerly raised my hand when the fatal question was asked, I was assigned to pick up the running backstays. An attractive high-school girl who was very interested in sailing was assigned the job of casting them off, so that she and I had to trade positions each time we tacked or jibed.

This was an actual race (as opposed to the very faux race we sailed with two other 12s on Friday), in which a Famous Male Sailing Celebrity Who Shall Remain Nameless was steering our boat.

The skipper of our boat, the man on board directly responsible for it, stressed to me before we set off that it was very, very important that I not let the runners actually touch the mainsail.

“Keep them away from the sail!” he urged.

Assuming he was concerned about chafing the sail, I duly swore to do this. Except, of course, this made it much harder to quickly bring the new working runner taut on each tack, as it had so much slack in it. Even worse, if you rose up over the runner’s winch while grinding it to get the runner on faster, you tended to get hit in the head with the boom, which on Courageous is extremely low.

So I had a terrible time of it. I got hit in the head (not very hard) about ten times and was consistently late getting the runner taut. Meanwhile, Mr. Sailing Celebrity was shamelessly hitting on the high-school girl while steering, and in the midst of his ongoing conversation with her would mutter to me sotto voce each time we tacked or jibed: “Backstay’s late.”

Looking up, I finally realized this was actually really important, because the boat in fact had no fixed backstay. I decided I better ignore the rule about not letting the runner touch the sail, and from that the point forward everything went smoothly.

As we were getting off the boat afterwards, the skipper shook my hand, thanked me for my help, and remarked: “Good to see you finally got the hang of the runners. The trick is to keep them as close to the sail as possible.”

I swear I wanted to punch him. But I just smiled and said: “So now you tell me.”

First thing the next day I threw my back out for the very first time, which I am convinced was not a coincidence. Life has never really been the same since.