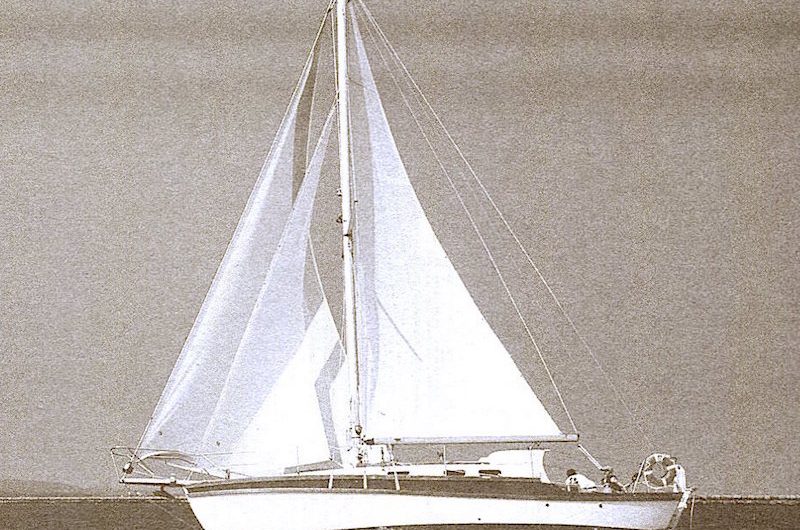 I mentioned the concept of a “slutter,” a sloop that is converted to a cutter by adding a removable inner forestay, in my last post on this subject and thought I should expound a bit on the process of the conversion. It is a popular upgrade, particularly on bluewater boats, and of course being able to hoist a staysail can also be handy on a coastal boat. My old Golden Hind 31 Sophie was a sloop when I bought her, and I converted her to a cutter rig with a removable inner forestay, although she became a true cutter, as I also increased the height of the mast and added a bowsprit to enlarge the foretriangle. In the photo up top you see Sophie post conversion, during her very first test sail, flying both a large genoa and her staysail, which in fact was something I rarely did, as it was difficult to tack the genoa around the staysail.

What I normally did was fly two different sets of headsails during different parts of the sailing season. In the early spring and late fall when the wind was boisterous, I set up the inner forestay, hoisted a yankee jib on the roller-furling headstay, and would fly the yankee and staysail in combination with each other, or just one or the other, depending on conditions. During the summer season, when the wind was normally lighter, I put away the inner forestay, bent the genoa onto the headstay, and sailed the boat as a straight sloop.

If you’d like to convert your sloop to a slutter (or even a true cutter), or if you are pondering buying an already converted boat, there are few things you should bear in mind.

The point where the inner forestay is attached to the deck must be supported from inside the boat so the deck can resist the load on the stay when the sail is flying. Often there is an appropriately positioned bulkhead under the deck to which you can fasten a deck-piercing chainplate or tang. Any such bulkhead should be properly tabbed and bonded to the hull. The deck core must also be sealed against moisture intrusion where it is penetrated by any hardware. 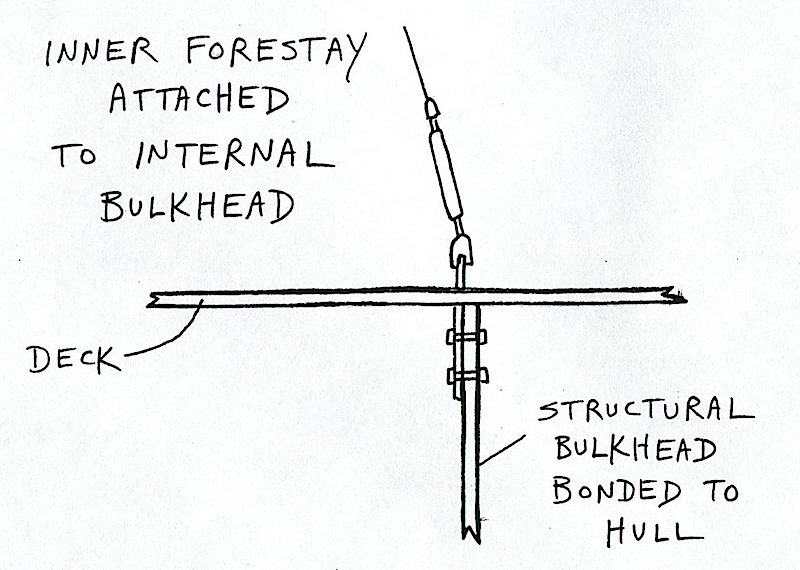 If no bulkhead is available, you need to create some sort of alternative support for the new stay. The most common approach is to install a tie-rod between the underside of the deck where the stay lands and some structural component of the boat’s interior, usually a bulkhead or piece of furniture that is itself securely bonded to the hull. 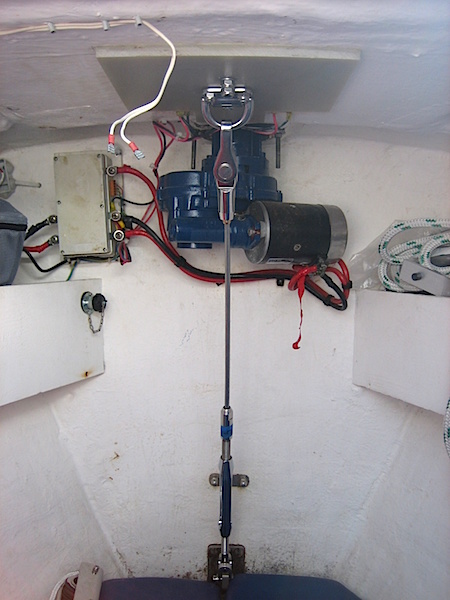 Example of a tie-rod installation. Here the tie-rod carries the staysail’s rig load down to the base of a structural bulkhead 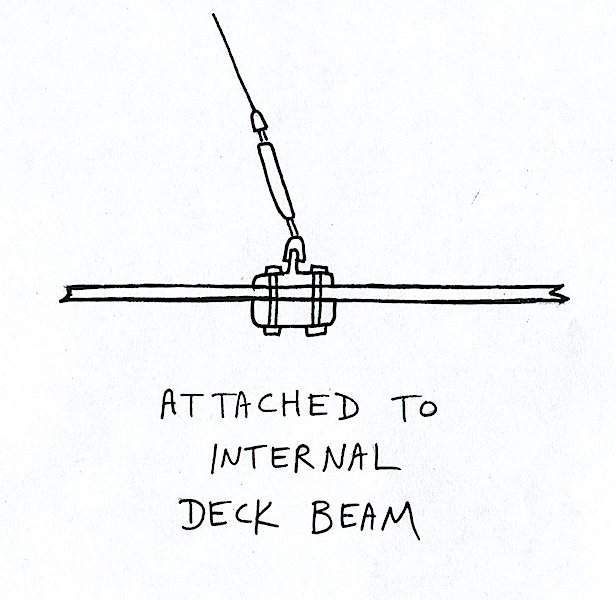 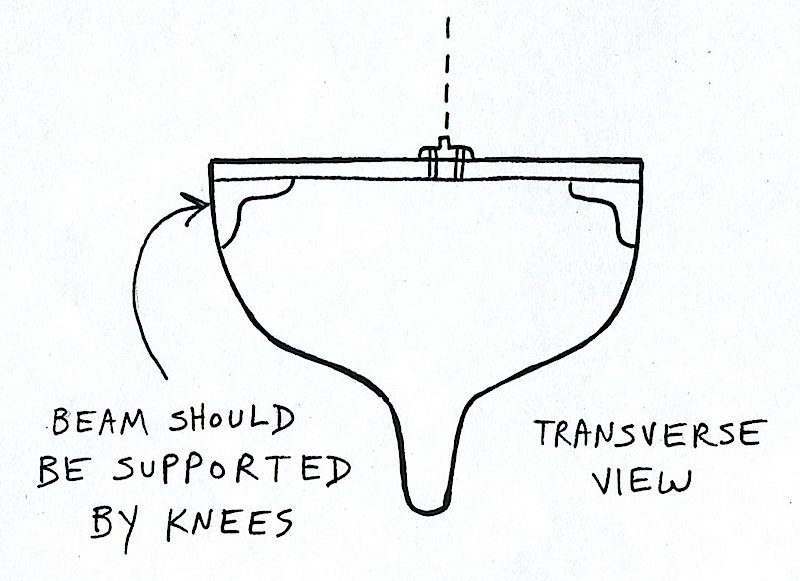 Another option is to glass in a deck beam with generous knees at either end to help transfer the load to the hull. You can through-bolt the attachment for the stay to the beam.

Positioning and sizing the staysail

When deciding where to place an inner forestay in relation to a headstay, you should consider the distance between the two, whether they will be parallel or not (purely an aesthetic concern), and the desired size of the staysail. The greater the distance between the stays, the easier it will be to tack a jib around the inner stay; the shorter the distance, the bigger the staysail can be. As a general rule, a staysail is not an effective working sail (as opposed to a mere storm sail) unless its area is equal to about 20 percent of the total working sail area. 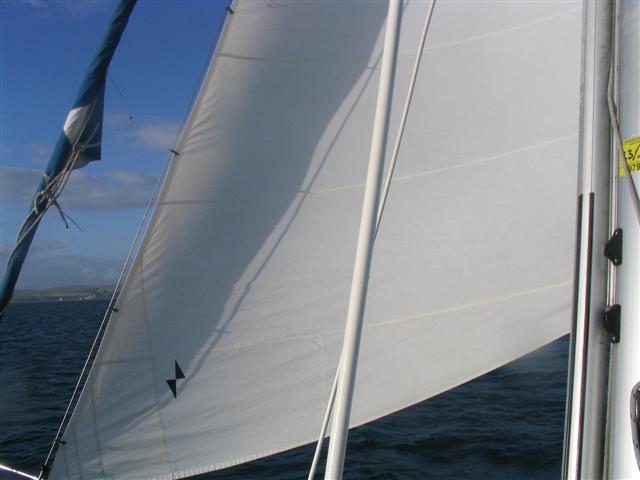 This staysail looks large enough to be useful

This usually requires a delicate balancing of priorities, depending on the size of the foretriangle. On many sloops there isn’t room for a decent-size staysail unless you accept that you won’t normally be flying both headsails simultaneously. Alternatively, you can enlarge the area of the foretriangle, as I did in my conversion. In any event, I think it’s best not to seriously compromise the size of the staysail, as it won’t get used much if it is no bigger than a storm jib. If you really want a storm jib, I’d recommend having a separate dedicated sail built for this purpose and bending it on in place of the staysail when necessary.

If you enlarge the foretriangle during a conversion there may be room for a staysail on a jib-boom, which greatly simplifies sheeting arrangements. The single line needed to control the jib-boom can be rove through a block and tackle, so that no winch will be required to sheet it home. The sail will also be self-tacking, which is always convenient, but the inner forestay in this case should be set up permanently.

If the staysail is loose-footed the inner forestay can be removable, but you’ll need sheet leads for the staysail on both sides of the deck. If you have confidence in your sailmaker’s ability to predict where the leads will land, you can install single sheet blocks on either side, but it’s better to install cars on short inboard tracks (these often end up somewhere on the coachroof) so that you can fine-tune the leads. If you know you will never fly a jib and staysail simultaneously, you can use one set of primary winches in the cockpit to handle both sets of sheets. Otherwise, you need a set of secondary winches for sheeting home the staysail. 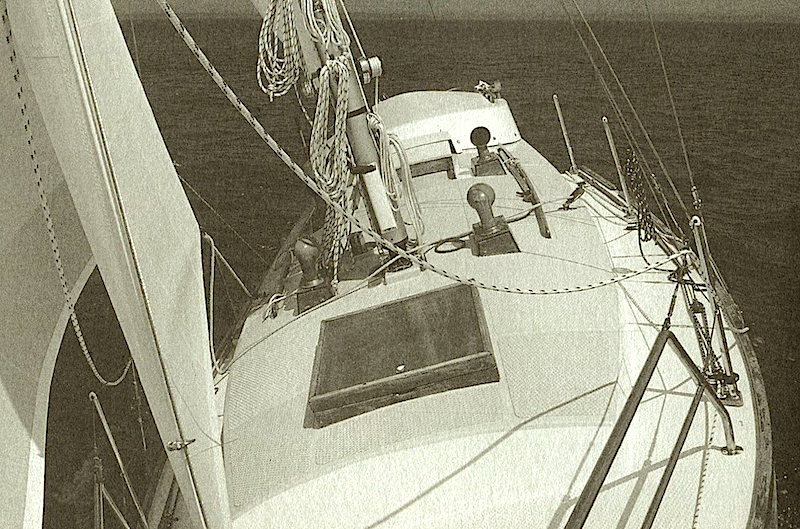 The staysail sheet leads installed during Sophie‘s conversion were fixed in place. They served well enough, but adjustable cars on tracks would have worked better

As for the top of the inner forestay, if it is fastened to the mast at or near a point supported by a pair of aft lower shrouds, you need not install running backstays to help support it. Some riggers I consulted when I was converting Sophie‘s rig suggested running backs are unnecessary in any event. They argued that back-loading on the mast from the mainsail offsets the front-loading from a staysail. This makes sense, I suppose, but if you want to be able to douse the main and run off under a staysail alone, which is a desirable option to have in rugged conditions, it is best to somehow back up the inner forestay.

The alternative to running backstays, if no existing aft lowers are opportunely placed, is a new pair of permanent swept-back aft shrouds. This means installing a pair of dedicated chainplates for the shrouds at deck level, which is a project in itself.

Running backs are much easier to install, but can be a pain to use. They should be set up on deck farther aft than permanent shrouds and must be cast off and set up again on the windward side of the boat each time you tack or jibe. As you reef the main, however, it should at some point be possible (usually after two reefs) to leave both running backs set up permanently, as they will then clear the head of the main. On deck the running backs can be set up on any reasonable strong point near the back of the boat–on a perforated toerail, say, or on a pair of well-backed stern cleats.

You’ll also need to install a tang on the front of your mast to receive the top of your inner forestay. There is all manner of off-the-shelf hardware you can use for this, or you can have something fabricated, which of course will be more expensive. It is best that the stay tang not just be riveted to the mast, but should instead have proper hounds wrapping around the mast part way to help spread the load imposed on it. 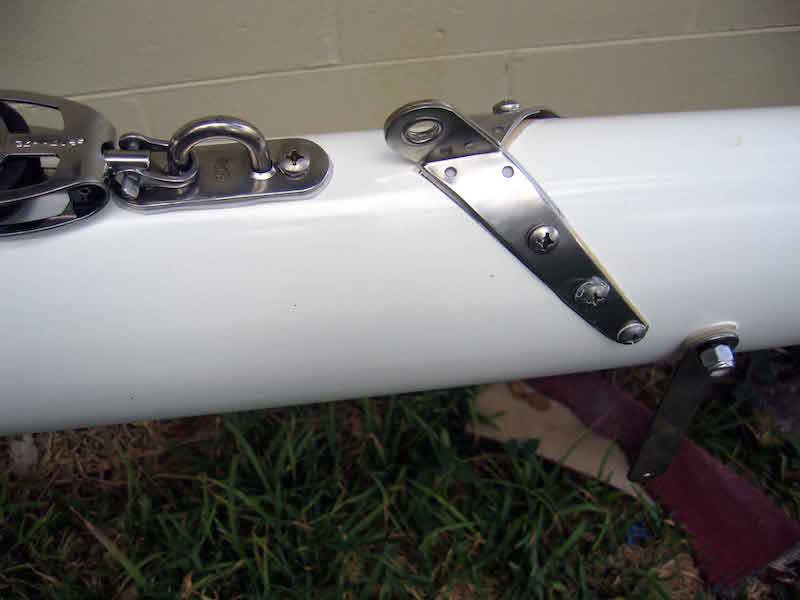 After-market hounds and tang installed on a mast. Here a padeye for an external halyard block is installed directly beneath the tang

As for a halyard for the staysail, in most cases it is easiest to install an external block just below the tang fitting for the inner forestay on the mast and reeve a new halyard through this. In some cases, however, there may already be a topping lift for a spinnaker pole on the mast that you can also use as a staysail halyard.