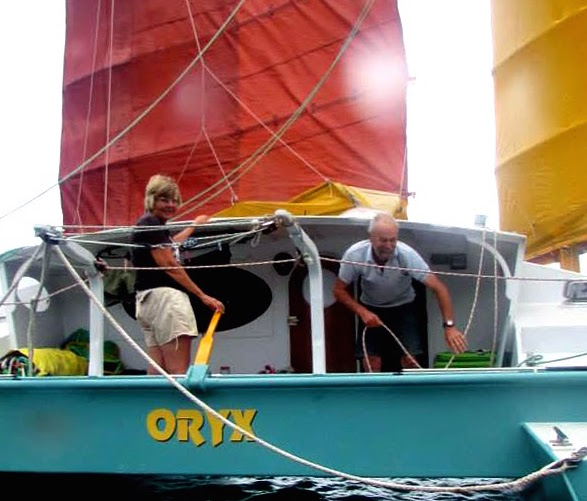 I think everybody who sails has vividly imagined some variation of this nightmare: you leave a crew member alone on deck for a while to catch some sleep below, and when you come back on deck you find your crew is missing. Disappeared, with no clue what happened to them. So it was in reality for poor Pete Hill, who departed Durban, South Africa, bound for Madagascar on Thursday with his wife Carly aboard their 33-foot junk-rigged wood-epoxy catamaran Oryx. Hill reportedly went below for a nap at some point on Friday afternoon, while the boat was still just 6 miles off the South African coast, and when he awoke Carly was gone. After a fruitless two-day search by South African authorities, Carly Hill, age 58, is now presumed to be dead.

Pete Hill, now age 65, has been a full-time live-aboard bluewater cruiser for all his adult life and has long been an avid proponent of junk rigs. He built his latest boat, a modified KD 860 design by Bernd Kohler, with Carly’s help in England during 2012 and since then the two of them have cruised in the boat across the Atlantic to Brazil via the Canaries and Cape Verdes and from there to South Africa.

Carly, a native of South Africa, had chronicled their adventures on both her Facebook page and on her blog. 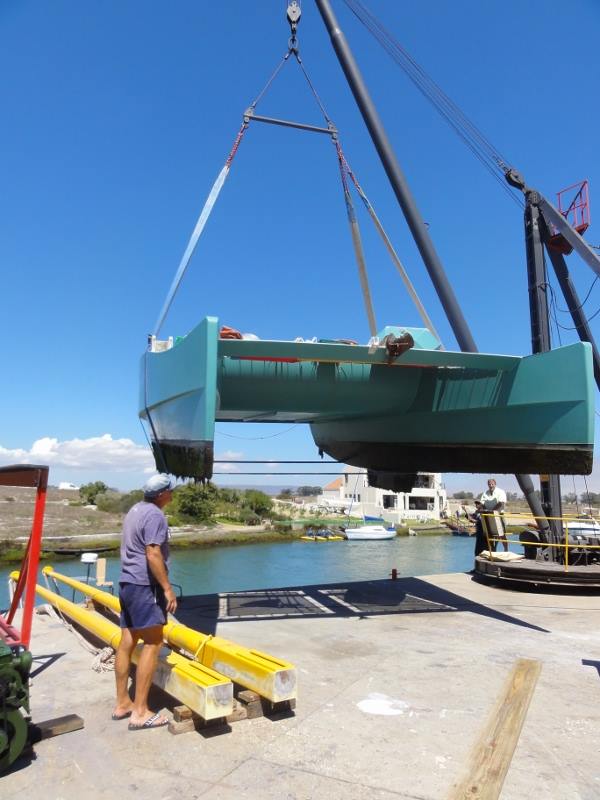 Oryx was hauled out in South Africa for a refit, her first since being launched in 2012, whereupon it was discovered that one keel, unbeknownst to Pete and Carly, had gone missing 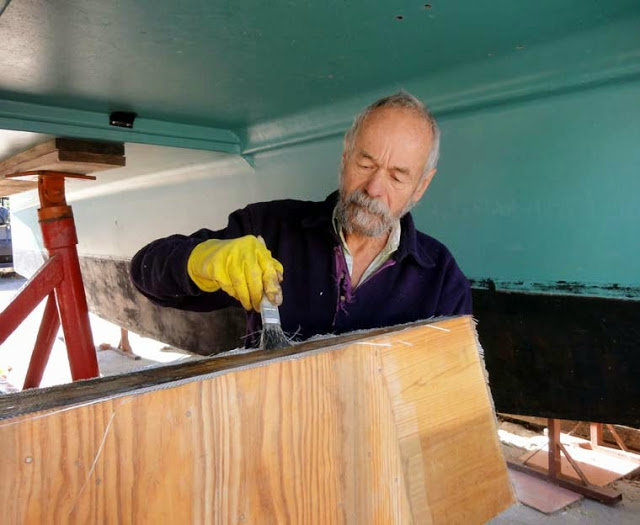 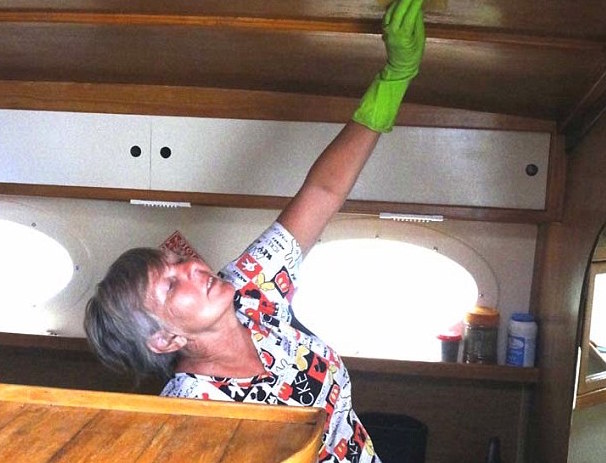 Carly works at sprucing up the interior

Pete first gained notoriety as a cruiser sailing his junk-rigged Jay Benford-designed dory Badger with his then-wife Annie Hill during the 1980s and early 1990s. Annie’s most excellent book, Voyaging On A Small Income (1993), laid out the essentials of their low-budget cruising lifestyle and philosophy and is considered a classic by cruising literature cognoscenti. Pete and Annie went their separate ways after Pete started in on his next self-built boat, the biplane-rigged catamaran China Moon, and the couple divorced in 2001. 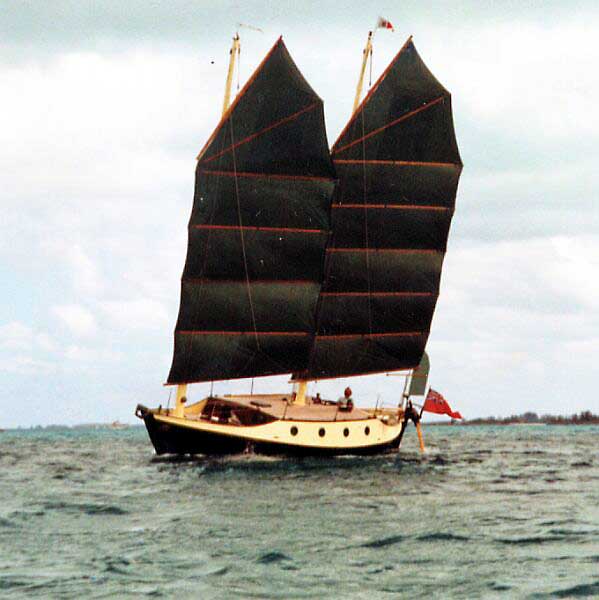 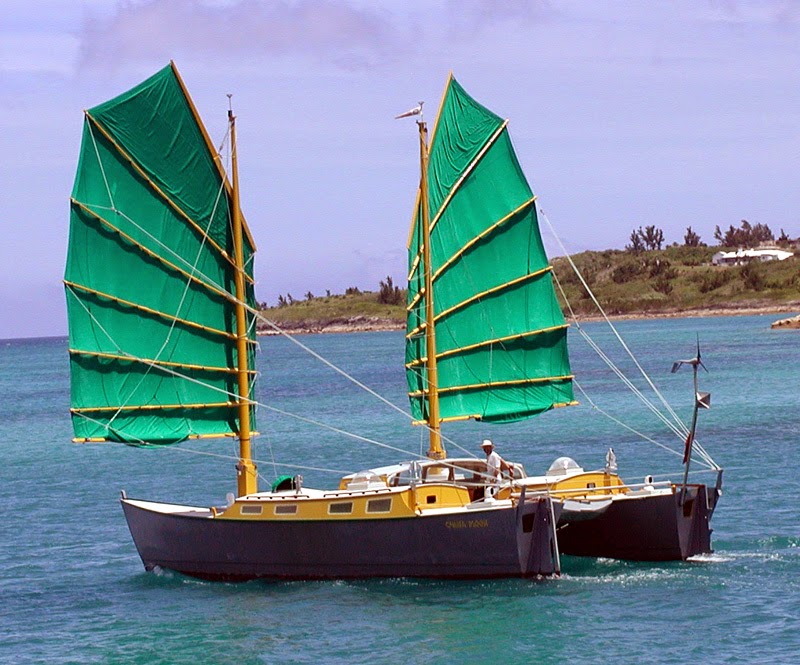 China Moon under sail, with Pete Hill at the helm 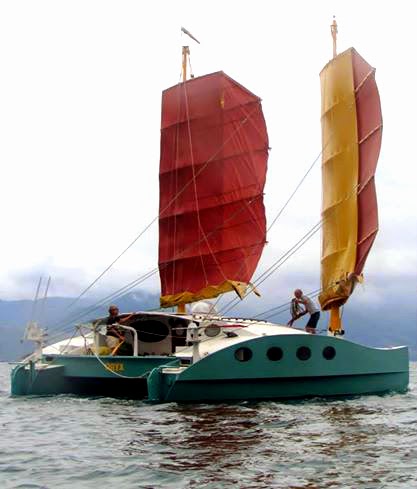 Oryx, like China Moon, carries a biplane junk rig and is seen here with Carly on the helm and Pete on deck 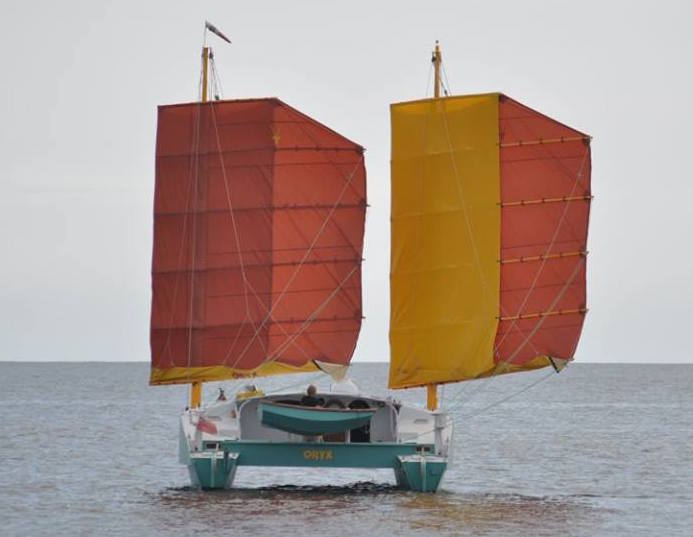 Another view of Oryx under sail. Pete seems to have developed his own unique variation of a junk rig

I’ve never met Pete Hill, but I have long admired him, and my heart goes out to him now. And also to Carly’s family. What an awful tragedy.

We have to assume, of course, that Carly somehow fell overboard, and I know there are many out there right now who are clucking their tongues thinking she should have been clipped in wearing a harness. But we’ll never know if that really would have made a difference here. So let’s save the should-you-constantly-wear-a-harness debate for another time and focus instead on simply honoring the loss of Carly.

UPDATE, June 25: Noonsite, which republished the post above, has received a statement from Pete Hill regarding the loss of his wife:

I am very sorry to have to tell you that on Friday 19th June Carly was lost at sea.

We set sail from Durban on the Thursday towards Madagascar and by Friday morning we were about 50 miles NE of Durban. After breakfast together I turned in at 8 o’clock to catch up on my sleep and woke again at 10 o’clock.

The sailor’s worst nightmare, Carly was no longer on board.

The wind was blowing westerly at 10 to 12 knots with a moderate sea on a clear sunny day and Oryx was sailing at about 5.5 knots under the self-steering. I dropped the sails and tried an all ships mayday on the VHF, but with no replies and no ships in sight. We were 6.5 miles off the coast and had no mobile phone reception.

The Navionics tablet app had been running our course so I decided to run back along our track under engine to try and find her. I searched until I arrived back at our pre 0800 position and then went inshore to call for help by telephone. I contacted the NSRI (National Sea Rescue Institute) who started to organise an air and sea search. I went back out and started a zig-zag search back along our track. A couple of hours later 3 helicopters arrived and started a search pattern and shortly afterwards 2 NSRI rescue boats arrived from Durban. I later found out that there was also a light aircraft searching at a higher altitude (with thermal imaging and surface radar).

The NSRI coordinated the search using unprecedented resources in a very efficient manner, but we failed to find Carly.

The only small consolation is that in the last few weeks Carly has spent a lot of time with her daughter Irene and more recently with her son Dylan, who lives in Durban, and especially, much time with her delightful 3 year old granddaughter Hannah.