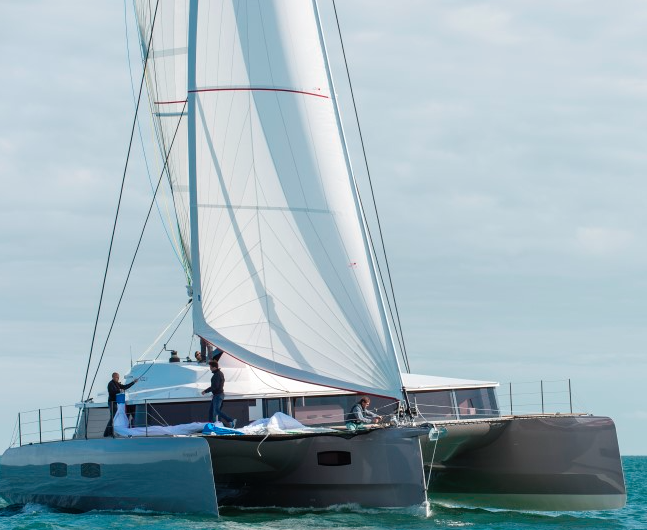 We all knew this day was coming. With the recent launch and test-sailing of the new Neel 65 the concept of “cruising trimaran” has officially metastasized into the upper stratosphere. I was impressed with its smaller sibling, the Neel 45, when I got a chance to sail one in France a few years ago, and I’m wondering if this new beast has achieved what must be considered the Holy Grail in multihull design: over-the-top accommodation space combined with decent sailing performance.

Looks like they got the over-the-top accommodation space box checked off in Sharpie ink. 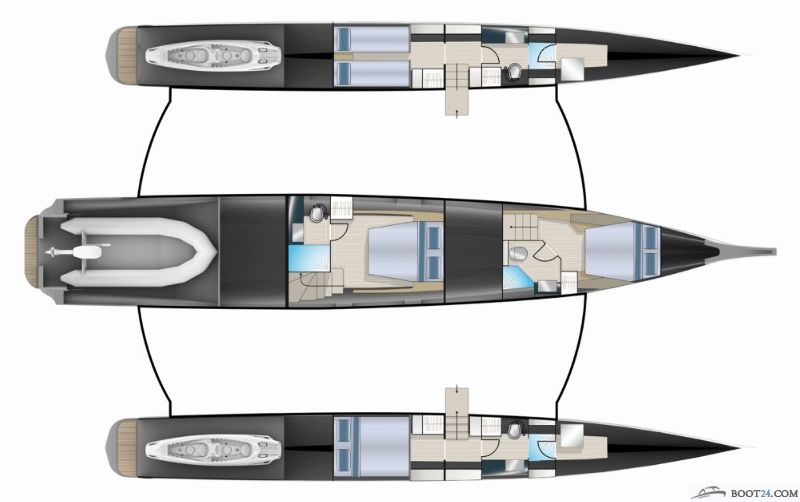 The “ground floor” plan shows no fewer than four separate staterooms in the main hull and amas, all with en suite heads. Plus there’s room in the three transoms to stash a tender and a pair of svelte water toys. 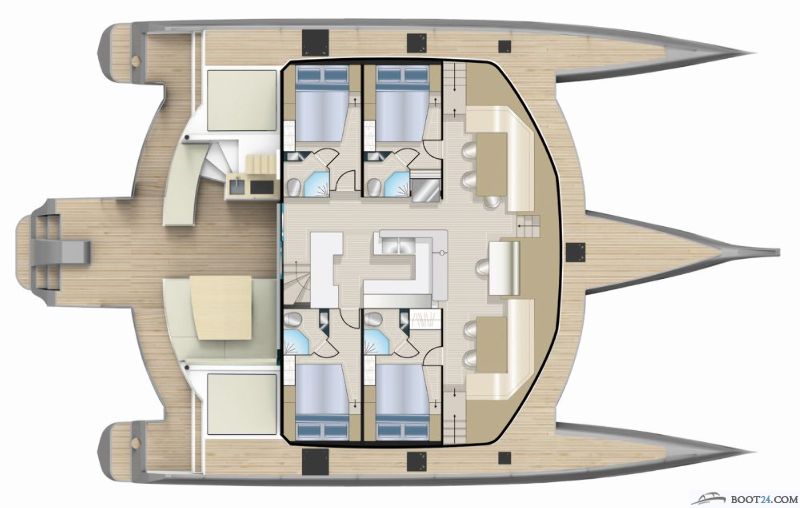 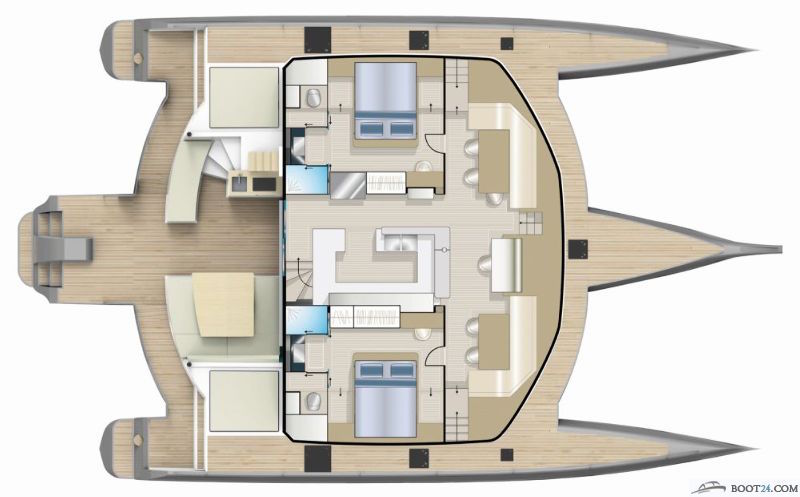 The two alternative upstairs plans for the bridgedeck meanwhile show either four or two staterooms (again, all with en suite heads), making for a maximum potential of eight separate staterooms! Think about it. That’s enough space for Mike and Carol Brady to cruise with all six kids and their spouses, with room left over for a crew (or Alice, if she’s game) to come along, too. Add on a large flying bridge with a proper table and settees for lounging guests and you have a charter barge extraordinaire with truly dynamic partying potential.

Rendition of the flying bridge

Ah, yes, Watson! But will she sail? This has always been the major stumbling block for maxed-out cruising multihulls. 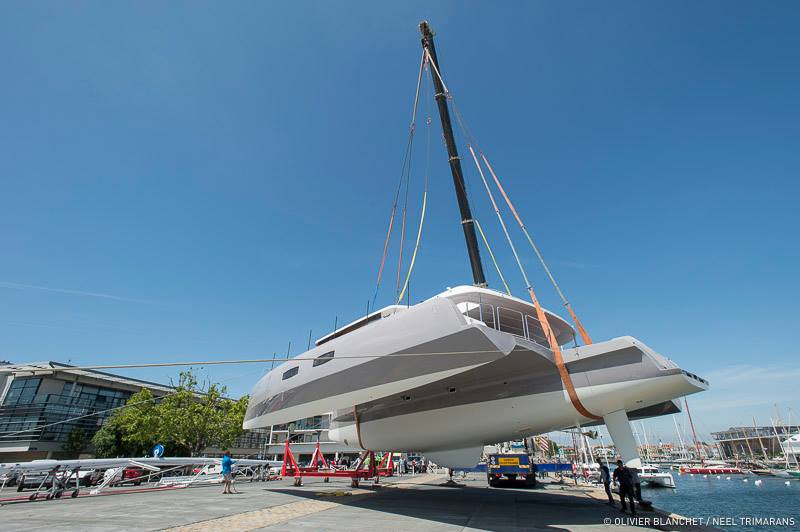 In this shot from her launching on May 28 we get a good view of the Neel 65’s underbody. That rather small fixed centerline keel, which mirrors the keel on the 45, might suggest inferior windward performance, but a) it’s deeper than it looks, almost 6 feet, and b) during my sail on the 45 I was rather impressed with how well that boat’s keel worked. We easily kept the 45 fully powered up at a 40-degree apparent wind angle. Not exactly a hot racing angle, but much better than the 50 degrees you see on most fat cruising cats. 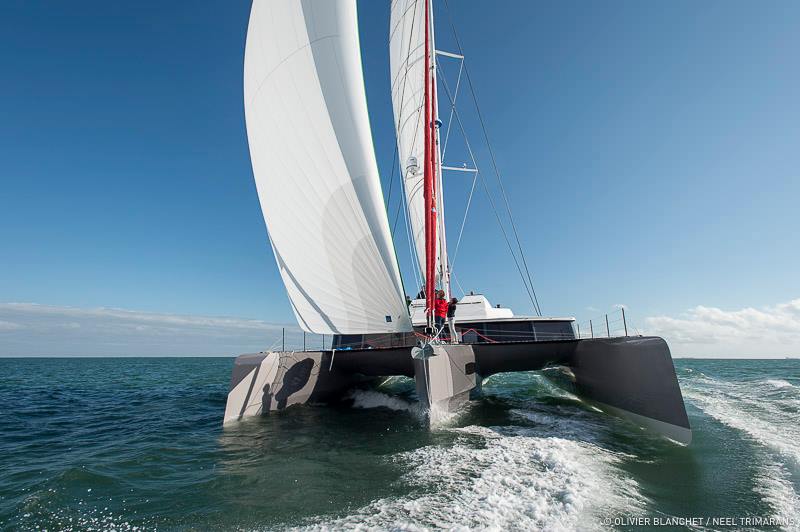 This head-on shot from the test sail also shows what we like to see performance-wise on the waterline: a nice high bridgedeck with tight narrow hulls. 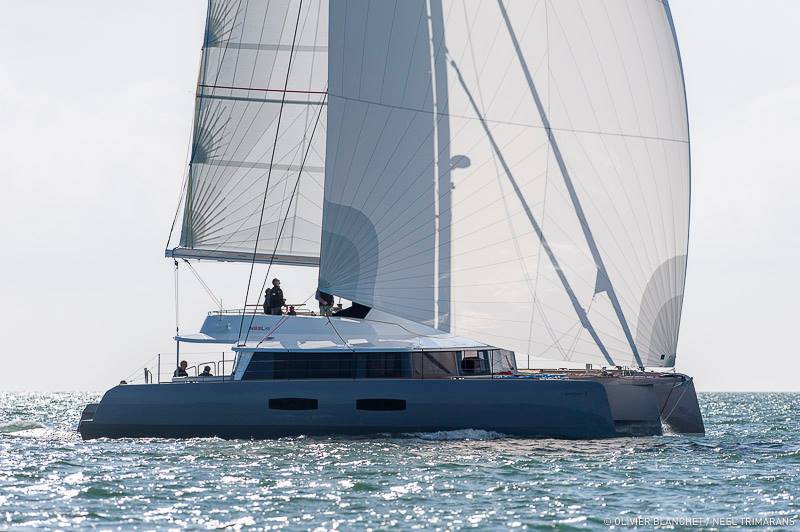 This nice profile shot of the boat sailing under an A-sail shows it is remarkably low-slung for a three-story boat. 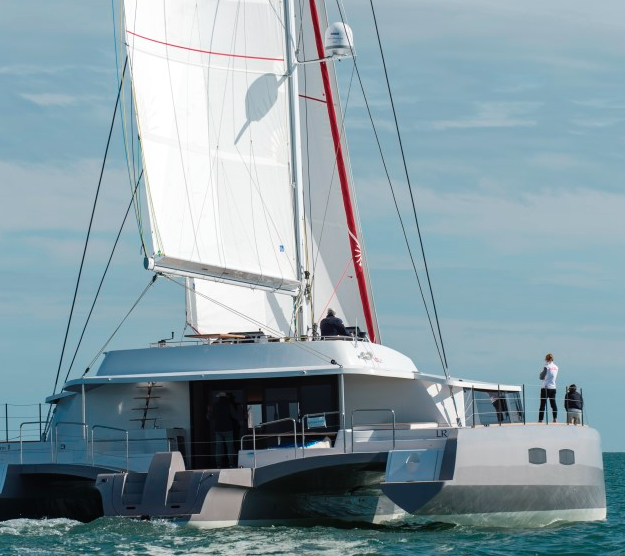 Though she does look a bit taller in this stern shot. 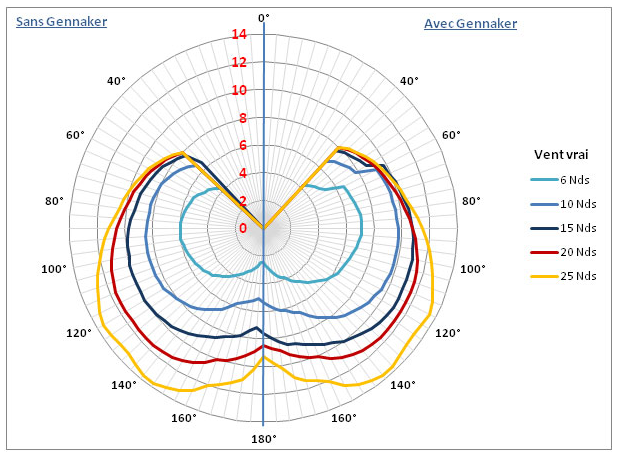 The projected polars do show a good turn of speed for a cruising multihull, with velocity ranging from 6 to just under 14 knots in winds between 6 and 25 knots. (Though, of course, this might involve a bit of fantasy on the designer’s part.)

Bottom line, obviously, is we won’t know how this boat sails until we actually sail it, but I see some serious potential here. This could indeed be a “fat” cruiser that sails pretty darned well, particularly if you order it with the optional carbon rig.

I sure hope they manage to bring one into the States so I can find out.

Here are some more numbers to ponder: