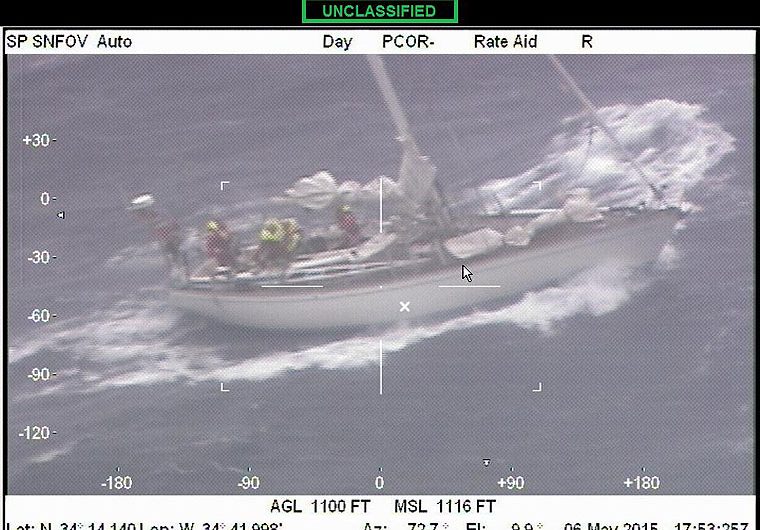 Bummer. Here I was looking forward to telling you guys all about the singlehanded passage I just did on Lunacy from St. Martin to Bermuda and instead I think I better go into this first. Details are pretty sketchy, but it seems five different yachts caught in a bad blow about 500 miles south of the Azores all called for help two days ago. A large SAR operation coordinated out of Ponta Delgada on Sao Miguel, which involved five different aircraft and four different ships, resulted in a dozen people being rescued. Tragically, one of these, a 6-year-old French girl who spent seven hours in the water after her family’s Lagoon 400 catamaran capsized and sank, died from hypothermia after she was recovered.

According to the best info I can cobble together right now the yachts involved were as follows:

Kolibri, Norwegian flag (evidently a Swan 44, see photo up top), with four crew aboard between ages 45 to 56 recovered by a Portuguese EH-101 helicopter. Kolibri reportedly had suffered a capsize and two knockdowns and had no engine or communications when her crew abandoned her. One crew member was injured, possibly with broken ribs.

Here’s a viddy of their rescue:

Rêves D’ô, French flag, a nearly new Lagoon 400 S2, with a family of four aboard. The boat reportedly capsized and sank; there may also have been a fire onboard at one point. The mother, Sophie, age 37, and the older son, Hugo, age 9, made it into a liferaft and were recovered by M/V Yuan Fu Star, a bulk carrier out of Hong Kong. The father, Claude, age 39, and the younger daughter Inès, age 6, did not make the raft and were afloat for seven hours in life jackets before being spotted by a search plane and recovered by M/V Ezperanza del Mar, a Spanish hospital ship. Inès passed away soon afterward. 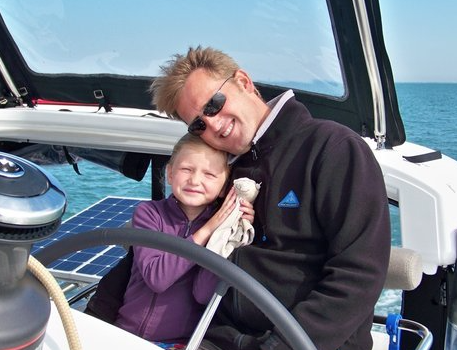 Inès and her dad aboard their boat. The family was apparently doing a circumnavigation together. You can check their blog site here

Missy 32, Swedish flag, with two crew who ultimately declined assistance from M/V Esperanza del Mar and continued on their passage

According to Portuguese authorities the five boats were caught in a low-pressure system that deepened dramatically over a short period of time. Wind speeds of over 50 knots were reported.

Here’s a preliminary surface chart for 0600 UTC on May 6 that shows the low in question over the Azores.

I dealt with the front trailing off this same system during my passage (more on that later). I also spoke to several people in Bermuda who were aboard boats there when the low passed just north of there. They reported winds up to 45 knots inside St. George’s Harbor.

I’m not going to do any kibitzing here, beyond noting that it is a little early in the season to be doing the run east across the Atlantic to Europe. (I know, I know. This from a guy who got in big trouble last year going to the W’Indies from New York in January!) And the weather this spring has seemed more unstable than usual. We’ve still got deep winter-type lows rolling off North America, and, believe it or not, there’s already a named tropical system stewing in its own juice right off Florida.

You climate-change deniers can go ahead and deny all you want, but us ocean sailors know that the weather is not nearly as friendly as it used to be.

Mostly, though, I’m just agonizing over the loss of that little girl! My heart goes out to her family.

And major kudos to all the SAR personnel and vessel crews that helped recover the other survivors. These included a U.S. Coast Guard flight crew on a C-130 Hercules search plane out of Elizabeth City, North Carolina, who happened to be exercising with the Portuguese in the Azores at the time. They stood by and assisted the Portuguese helo crew that recovered the Norwegians.