This is something I ask myself quite often: can a modern truly cutting-edge high-performance racing sailboat also be a cruising boat? In certain ways, of course, the old ideal of the true cruiser-racer, per the glory days of the Cruising Club of America rating rule and boats such as Carleton Mitchell’s famous yawl Finisterre, evaporated many decades ago. Yet still it is an ideal that both boatbuilders and boat owners incessantly aspire to somehow realize in a modern context, and it is fascinating to watch how these aspirations manifest themselves. Take, for example, the Revolution 29 (see image up top), a new cruising design developed in France that is directly based on David Raison’s radical scow-bowed Mini 6.5 in which he won the Mini Transat in 2011.

Raison’s Mini was not just radical in appearance; it was radically fast and won the 2011 Transat by a large delta, setting a new course record in the process. This success was so significant that other important monohull racing classes—Open 60s, Class 40s, TP 52s—pretty quickly banned scow bows for fear their existing fleets would instantly be rendered obsolete. Development of the concept continues however within the Mini class, which has long been a leading hotbed of high-performance monohull sailing innovation. 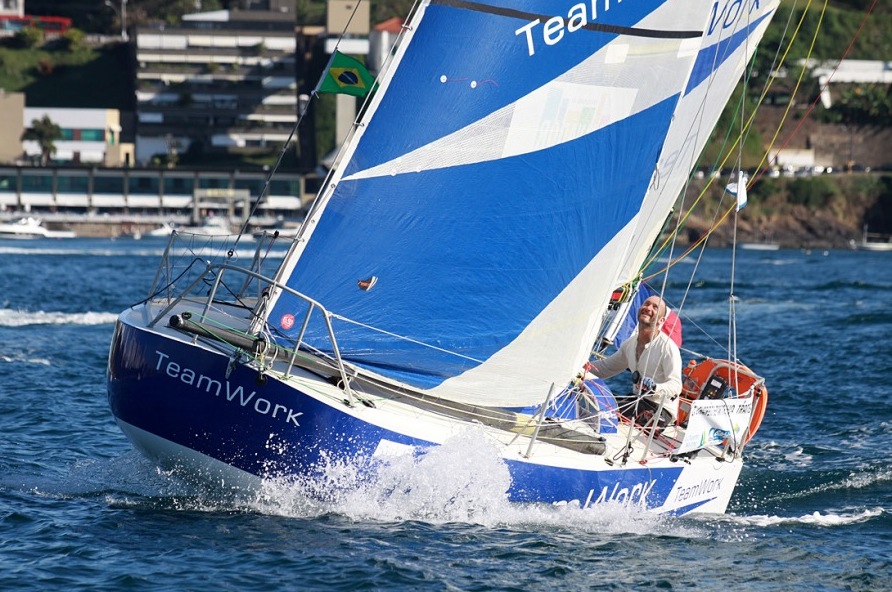 What’s interesting about the scow bow, of course, is that it is one of those few racing innovations that immediately and obviously has critical advantages in the cruising market. As in: if you make the bow of any boat much wider you have lots more space inside for accommodations. 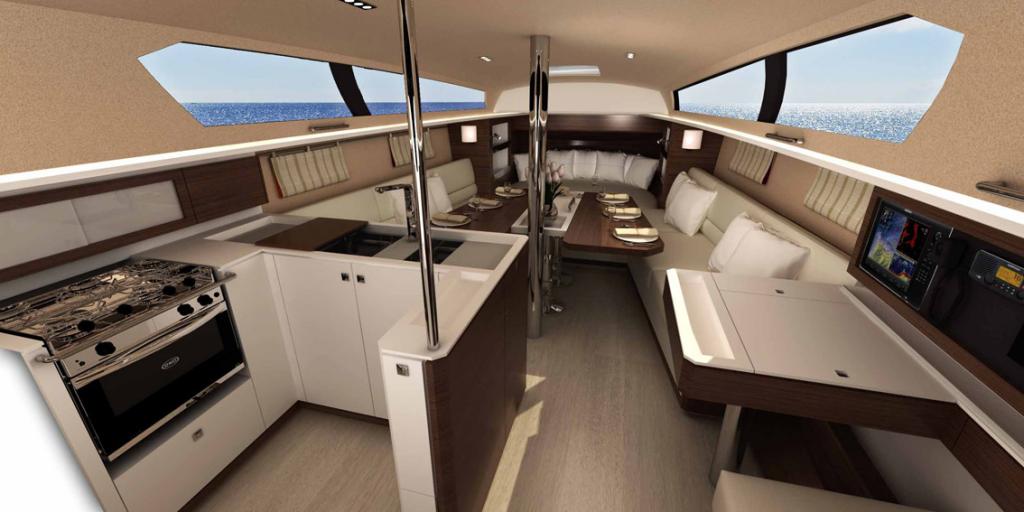 Interior of the Revolution 29. A whole lot of space for a boat this small. Note there is also a predecessor design, the Revolution 22, more directly based on the 22-foot racing Mini

But putting a scow bow on a cruising boat obviously doesn’t instantly make it a “cruiser-racer.” What makes the scow bow super-competitive is that it facilitates a boat’s ability to plane, and the other key factor in that equation is always weight. Or rather the lack of it. Load up a boat with lots of furniture and gear and you will seriously inhibit its ability to plane regardless of what shape its bow is. As always, a certain balance must be achieved and compromises must be made.

To get an idea of what a competitive scow-bow boat looks like under sail, watch this viddy here of TeamWork Evolution drag-racing against a conventional Mini.

You should note in particular the boat’s insanely huge sail plan. Prototype Minis are renowned for these, and obviously the rig on any reasonable cruising boat would want to be quite a bit smaller. One question in my mind is whether you in fact need all the extra sail area to make the scow bow fast. Could it be that with more cruiser-sized sails the scow bow might actually be slower than a conventional bow? 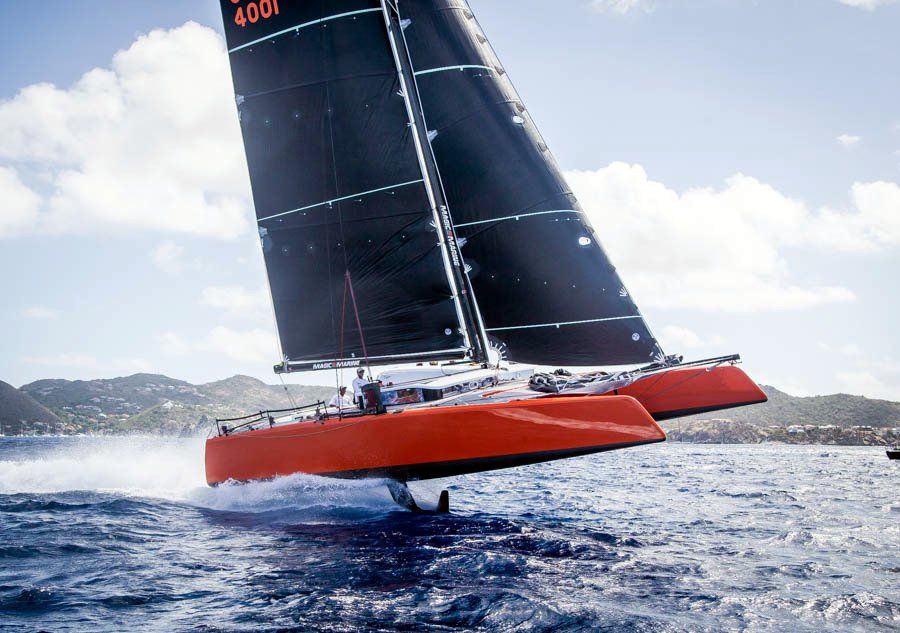 The new G4 does its flying thing

Another question being openly discussed right now, thanks to Gunboat and its new G4 foiling catamaran, is whether foils make any sense on a “cruiser-racer.” As I mentioned in my previous post on the boat, it is the first fully foiling boat with any sort of accommodations, and Gunboat has been marketing it as a coastal cruiser-racer. And now in its racing debut at St. Bart’s the svelte little beast has capsized in dramatic fashion, which has prompted some forum trolls as well as a few otherwise polite people to wonder out loud how this could possibly be termed a cruising boat.

Wipe Out from Gunboat on Vimeo.

Watch the viddy here first and then ask yourself: did the boat capsize because it was foiling, or did it capsize because the crew was unable to release the mainsheet for some reason? To me it definitely looks like the latter and that this would have happened, given the issue with the sheet, to any performance cat whether it was airborne or not. 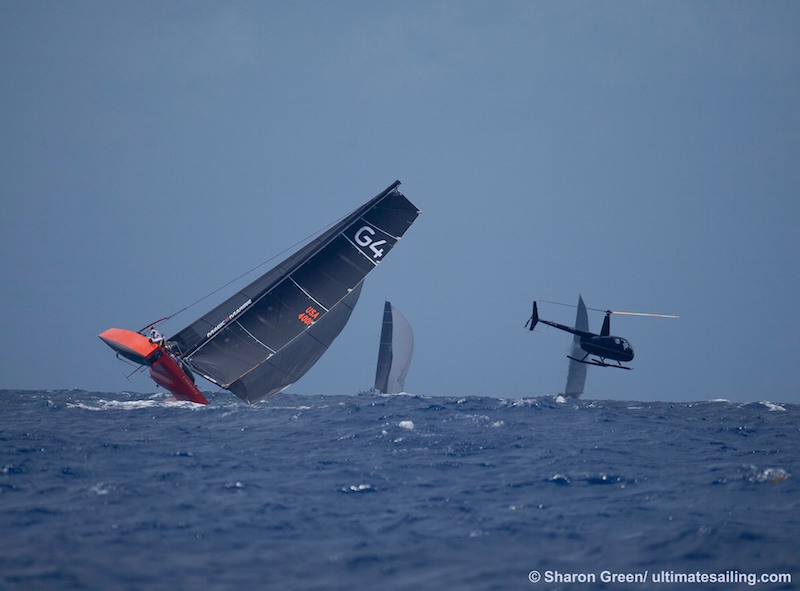 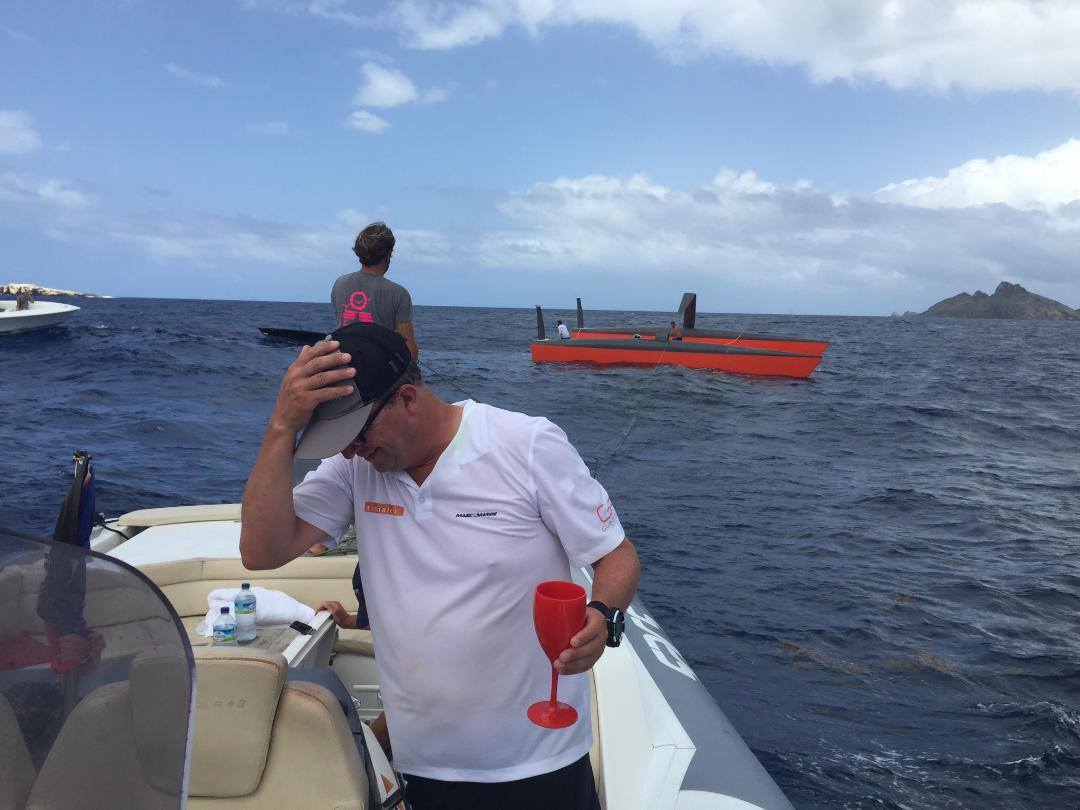 So maybe we shouldn’t be focussing on the foils so much. After all, as I understand it the G4 was originally developed as a straight performance cat and the flying foils were added later in the process. Like the AC72s in the last America’s Cup go-round, the G4 wasn’t born a foiler, but evolved into one. Also, of course, it is perfectly obvious that the boat capsized because it was being raced and not cruised. The crew was pushing the boat to its limits, and just because it has a limit (like any boat) doesn’t mean it can’t be cruised. For example, I have a friend who once owned a heavy full-keeled Tayana 37 that was dismasted during a distance race because he declined to take his spinnaker down when conditions got strong. The spinnaker in a gust just pulled the mast right off the boat. Which obviously doesn’t mean you can’t go cruising in a Tayana 37.

I think the real question to ask is: is there a point at which a boat becomes too performance-oriented to really be termed a cruiser? Which really is just another way of asking: what exactly is a cruiser-racer?

Back in the days of Carleton Mitchell and the very conservative CCA rule it was a pretty simple concept. A cruiser-racer was a boat designed to cruise that you could also race, and basically all you had to do to do that was take a ton of crap off the boat and—if you were very serious—bend on different sails. Back in those salad days, that was all it took to be competitive at the highest levels of racing.

These days there are many more variations of the species. There is a vast universe of older boats racing mostly under the PHRF rule in local beer-can series that are very obviously cruising boats that are being raced just for fun. We have a few what I call “captive venues,” the best example being Swans, where there is a small universe of very active racing focussed usually around a brand, where an honest-to-God cruising boat can engage in some pretty serious racing with other cruising boats. We have fancy expensive “performance cruisers” with luxurious interiors that can be raced if desired with minimal changes to the boat (this is pretty much the category the larger Gunboat cats fall into). We have a few even more insanely expensive performance cruisers with wholly interchangeable interiors for both cruising and racing. (I have even seen boats with interchangeable keels!) We have various folding trimarans with cramped accommodations that can be raced in various events. We have families with small children cruising around the world in modified open-class ocean racers. We have “buckets” where enormous super-yachts, obviously designed for cruising in the most obscenely opulent sense of the term, can race against each other.

And on and on and on. The market for sailboats that can be both raced and cruised has become so complex and variegated it is impossible to say where it begins and ends.

Really the only advice I can give to help make sense of this spectrum is that the terms “cruiser-racer” and “racer-cruiser” should not be used interchangeably. Rather we should agree on two specific definitions. As in a cruiser-racer is a boat designed to cruise that can also be raced, and a racer-cruiser is a boat designed to race that can also be cruised.

The G4 I think is certainly a racer-cruiser, and perhaps to some it is an extreme example, but I for one would be very happy taking it out for a week’s worth of high-octane gunkholing.

IN OTHER DEVELOPMENTS: There’s some buzz on the Sailing Anarchy forums that the Gunboat 55 Rainmaker, abandoned after being dismasted back in January, has been spotted again, afloat, but with her coachroof torn away (remember, this is an open-bridgedeck boat, the roof is merely shelter). There’s even one guy claiming the boat has been towed in somewhere, but so far there’s no confirmation of this. I have heard confirmation of the boat’s being spotted, and of the damaged coachroof, from the boat’s designer Nigel Irens via third parties.