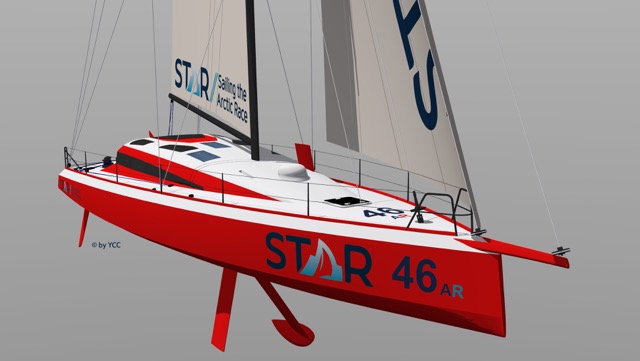 This is an event I’ve had an eye on for a little while, but had mentally stashed it in my IBIWISI (I’ll Believe It When I See It) file. Well, I think I may be starting to believe it. Since the beginning of the year, organizers of the Sailing the Arctic Race (STAR), to be run in 2017 along a 7,700-mile course that stretches across the top of North America, have announced the enlisting of their first official competitor (a team called STAR Spain, led by Vendee Globe skipper Javier Sanso) and–more importantly for all us boat geeks out here–have also recently released renderings of the one-design STAR46 yacht in which the race will be sailed (see image up top). The most salient feature of these boats is that they are to be constructed of a fully recyclable basalt-fiber balsa-cored laminate developed by an Austrian company Fipofix (a race sponsor, of course) that is trying boot basalt-fiber boatbuilding into the big time.

Ideas like this really do need to be encouraged. I don’t know about the rest of you, but more and more these days when I look at composite fiberglass and carbon-fiber boats–these absolutely enormous hunks of fancy plastic we like to sail around on–I cringe at the thought of what’s going to happen to them. Which is pretty much nothing. The dead ones, the numbers of which are only increasing, most likely will be lying around for thousands of years into the future, abandoned in boatyards or crushed up in landfills. In the Enviro-Fascist World Order to come their construction no doubt will be absolutely prohibited, so it may behoove us to get a jump on the problem before the Enviro-Fascists come to power (which, unfortunately I think, may only be inevitable if our species is to survive our zeal for trashing the planet–or boat, if you will–that we all live upon).

Whew! Pardon the rant. Now back to the facts:

Basalt fiber (called “volcanic fiber” in the latest PR blasts, as basalt is actually an igneous rock created when volcanic lava rapidly cools) is not exactly a new idea. The concept was originally patented in the U.S. in 1923 and saw some use in military applications in the U.S. and the old Soviet Union. It has since been used in various other contexts, including boatbuilding–witness the basalt-fiber catamarans already being built by African Cats. 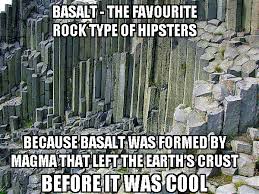 Example of basalt in a state of nature 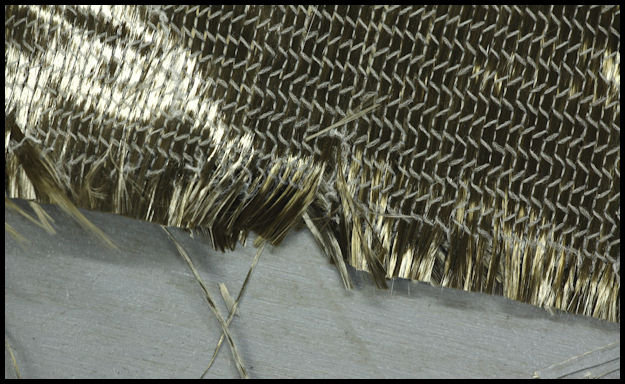 Example of basalt rendered as a fiber. The raw rocks (carefully selected) are melted (at temperatures of around 2,250 degrees Farenheit!) and are extruded as continuous filaments

Fipofix’s trick is that they have figured out a method (recently patented, very hush-hush) for handling and orienting the naturally brittle fibers into a rugged unidirectional fabric without breaking any of them. In older processing methods, apparently up to 40 percent of the fibers were damaged in handling, thus reducing the resulting fabric’s performance. From a structural perspective, basalt fiber otherwise has several points in its favor. It is significantly stronger than the common E-glass used in most boatbuilding, is more or less comparable to more exotic S-glass, is stronger even than carbon fiber in certain respects, but with much higher UV resistance. It is also fireproof, hydrophobic, acid-proof, plus abrasion- and shock-resistant. It’s more expensive than E-glass, but cheaper than carbon, S-glass, or aramid fibers. It can be set in epoxy, vinylester, or polyester resin and can be vacuum-infused more easily than either E-glass or carbon fiber. Weight-wise (it is made of rocks after all) it comes in just a tad heavier than common E-glass.

Fipofix has already built and tested a “proof-of-principle” boat, a so-called Open 16, that last year completed an Atlantic circle cruise from France to Florida and back. 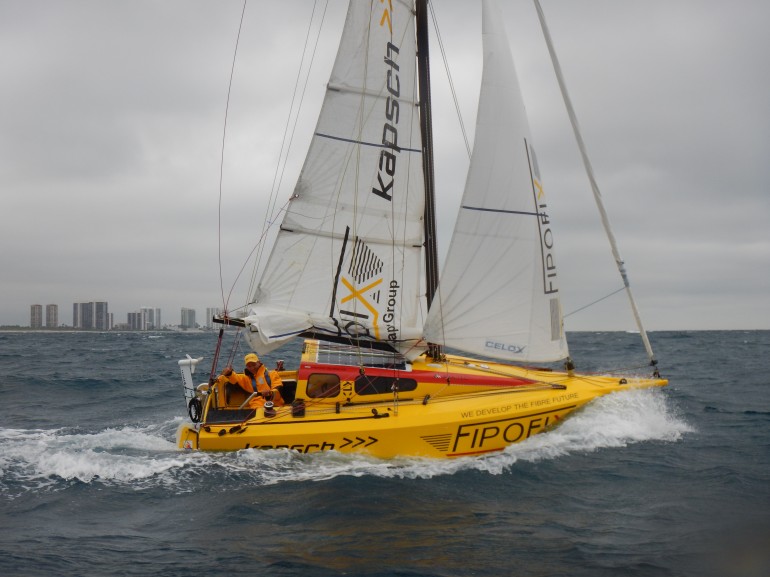 The Fipofix Open 16 under sail 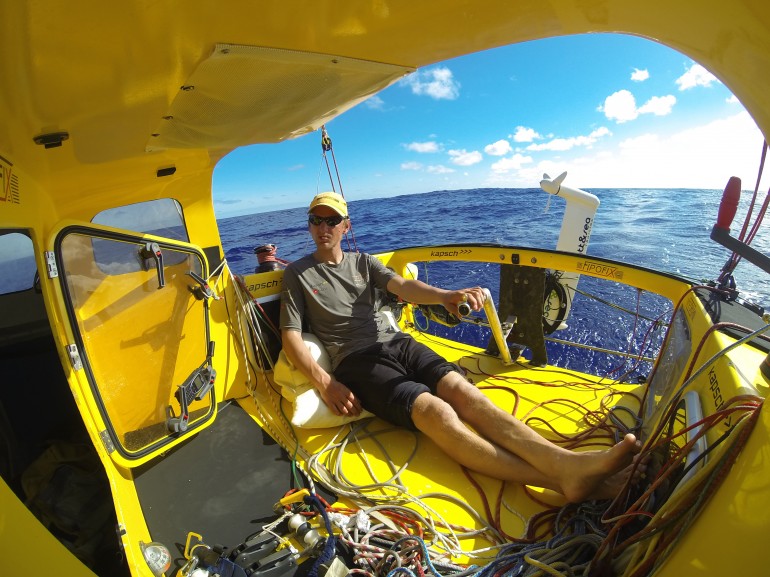 The much larger STAR46 boats, to be built at Philbrook’s Boat Yard in Sidney, British Columbia, look to be quite a bit fancier. They’ll have six different watertight compartments, double hulls, daggerboards, and canting keels. They’ll carry crews of six and will be equipped with sails from North and hardware from Harken. Costs have been estimated at between $800K and $1M. 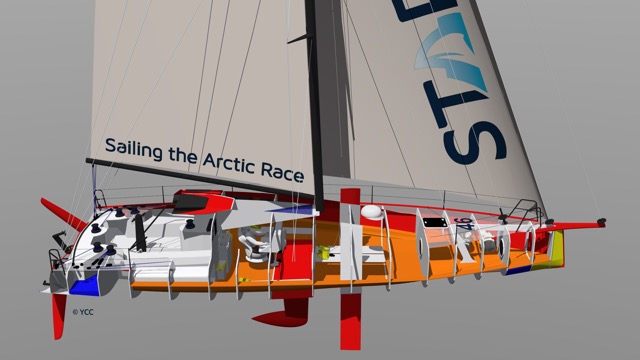 A STAR46 from the inside out

As for the race itself, race director Robert Molnar has recently announced that he’s currently talking to a total of eight potential teams, from Europe, North America, China, Australia, and Brazil, and expects to build at least eight and perhaps as many as 12 boats, with construction at Philbrick’s beginning this summer.

One the race’s primary goals, appropriately, is to be super-clean environmentally and achieve Gold Level certification per the Clean Regattas program administered by Sailors for the Sea. 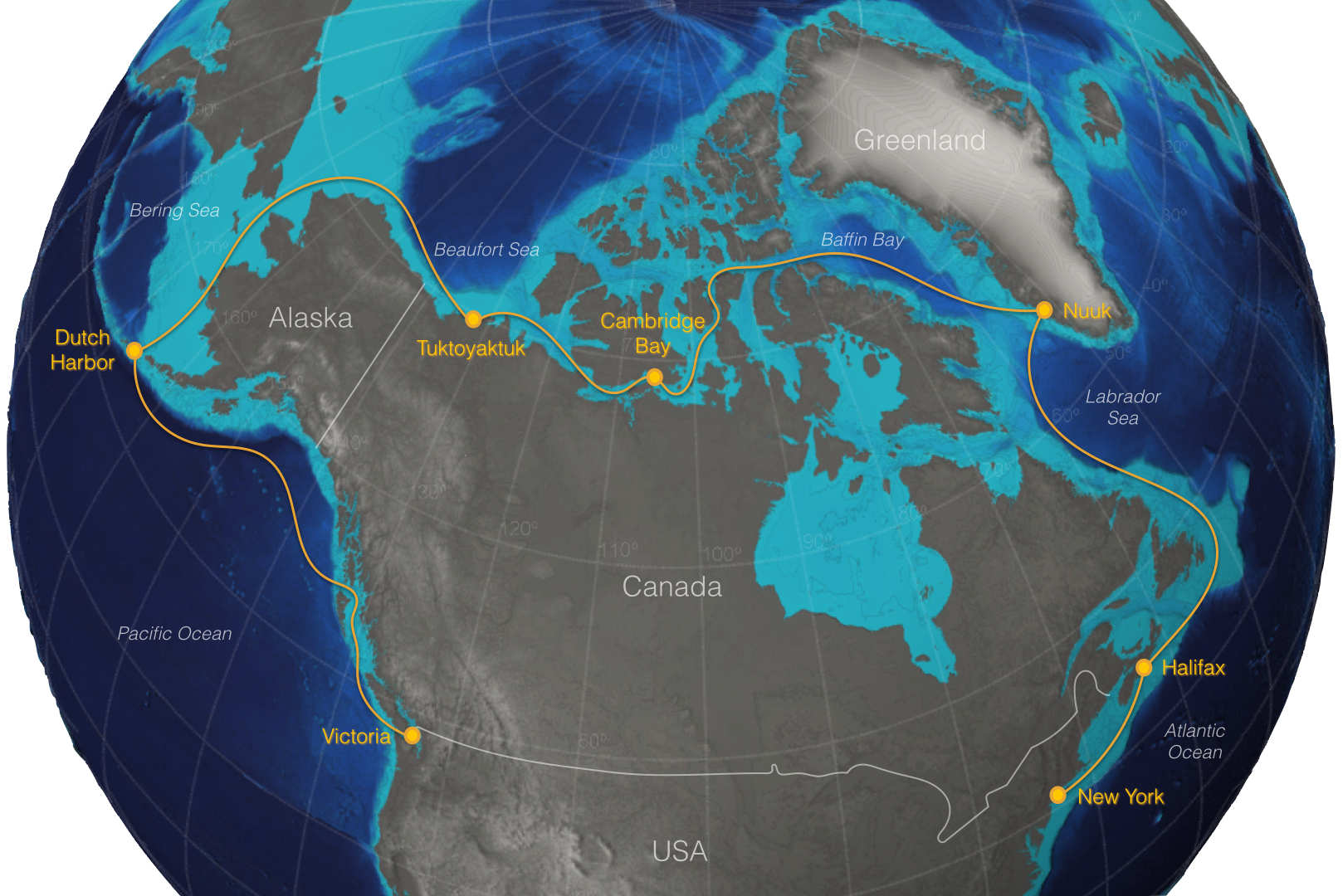 The race course, with six stops, is scheduled start in July 2017 in New York and finish in October at Victoria, British Columbia

The biggest question in my mind is what will it be like actually racing up in the Northwest Passage? My understanding is there’s plenty of ice but not much wind up there. Most cruisers who run the route–and there still really haven’t been that many of them–end up motoring much of the way. Plus, of course, in some years (like last year, for example, when almost no one made it through) the course is practically impassable.

If they do succeed in getting to the start line in New York, this is sure to be an interesting event.