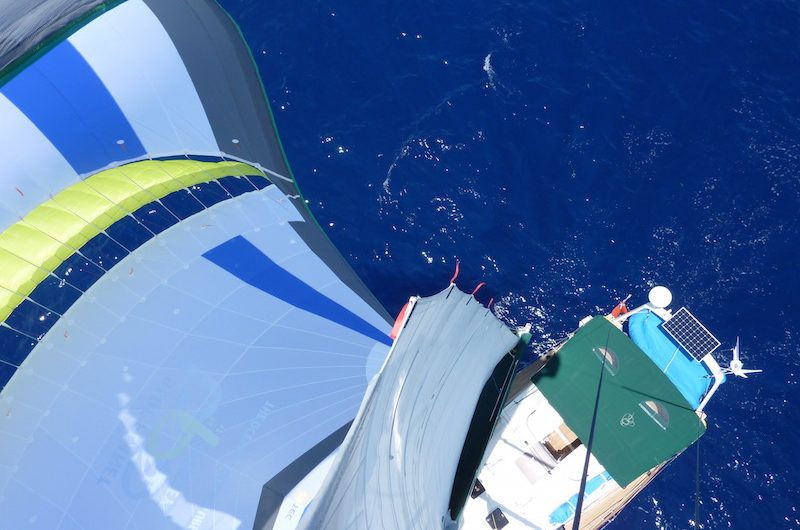 O how fickle the Wind Gods! A couple of weeks ago while aboard Lunacy with the family in St. Martin you’ll recall we had far too much of it. Wind, I mean. Then just two days after returning from that venture, I sallied forth to join Jimmy Cornell aboard his new Garcia Exploration 45 Aventura (same name as his last three boats) to crew on a 1,300-mile passage across the entire breadth of the Caribbean during prime-time tradewind season, and what do I see on prognosticatory WX charts while waiting to board a flight to Florida? A most emphatic lack of wind, 10 knots or less, all the way from the shoal-spangled Bahamas to the chicken-neck isthmus of Central America. For one whole week, at least.

Not to worry. Forecasts often fail to correlate with reality (so I told myself). And for the first part of our voyage, I speculated, a lack of wind and some no-nonsense motorsailing might actually be very helpful. For the question of what route to take on this passage is not exactly a simple one, thanks mostly to the inconvenient geo-location of a rather large island right on the rhumb line twixt Ft. Lauderdale and Colon. The one called Cuba.

How to get around it? There’s really no way to do it without spending more time than you’d like going east. On studying the charts for a while I had concluded there were just two options: A) west-around, which yields the shortest distance to putting Cuba in your wake, but sets you up for potentially a long windward slog southeast across the heart of the Caribbean to Panama; or b) east-around, doing major easterly miles close along the Cuban coast via the Old Bahama Channel, then southwest through the Windward Passage between Cuba and Haiti and straight on to Panama with the wind abeam or even abaft the beam.

That sounded sweet, option B, particularly given the forecast. It seemed a few days of unusually light conditions should afford us a golden opportunity to slip east through the Old Bahama Channel without getting beat senseless by the normally adverse breeze.

But no. On arriving in Ft. Lauderdale mere hours prior to Aventura‘s departure, I learn that Jimmy, recognized master of cruiser-friendly passage-planning and weather-routing, has plotted out a third way I never thought of: head straight east across the Gulf Stream, through the Northwest Providence Channel into the heart of the vast Bahamian archipelago, turn southeast down the east coasts of Eleuthra, Cat Island, and Long Island, pass west of the Turks and Caicos, and thus finally fetch the east end of Cuba and so transit the Windward Passage.

Yes, it’s a bit longer, Jimmy explains, but this way we avoid the very strong adverse current in the Old Bahama Channel. We also put in most of our easting while still north of the tradewind belt proper. And, think I to myself, we also somewhat synchronistically get to see something of the Bahamas, where I haven’t set foot or keel since last time I spent any “quality time” with Jimmy, over 20 years ago in the Exumas at the conclusion of his America 500 rally. 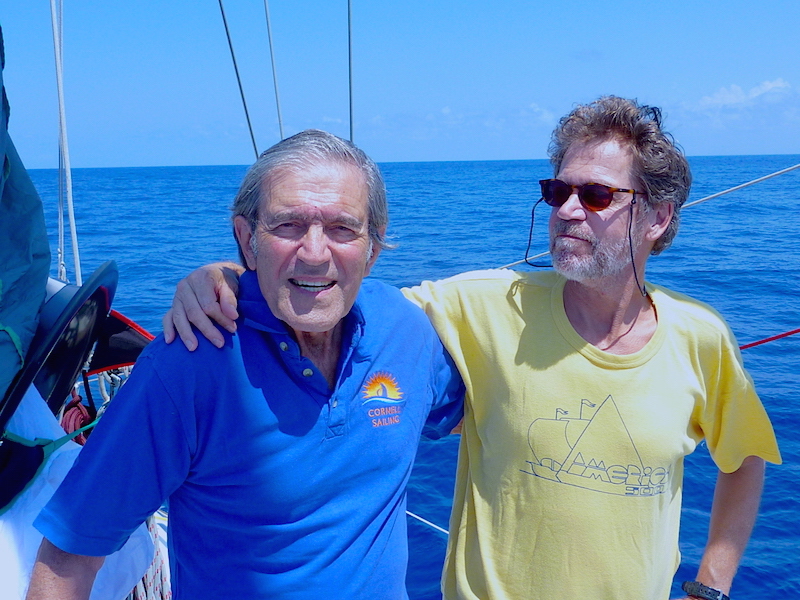 Reunited at last. In 1992, at a large party thrown by my boat’s owner after the America 500, I was anointed master-of-ceremonies and got to give Jimmy a prize (a cheap glasses-nose-and-mustache disguise) for looking most like himself. Here he has in return temporarily loaned me on old America 500 t-shirt he found buried somewhere so we could get our picture taken together. I crewed on three different boats in the rally (the first was an old Alden schooner that sank in a river in Spain), and this (more or less) was the beginning of my career as an ocean sailor

Of course, we didn’t stop anywhere this time. But I will say this about the latter-day Bahamas: it is a veritable hive of cruise ships. They are everywhere, heading in all directions, like pinballs caroming off bumpers in some vast arcade game. 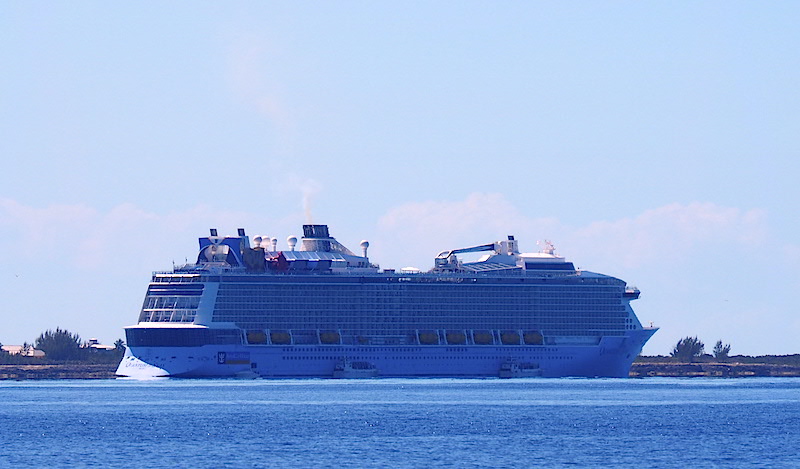 Just one of many we sighted. This one has stopped at its own private destination island, which has a beach and lots of water toys for passengers to play with. This private-island thing is evidently a trend in the industry and threatens the prosperity of traditional cruise-ship destinations that are real places with real people and businesses in them

Our end-around through the Bahamas, as we expected, did involve lots of motorsailing, thanks to that fairly accurate forecast, but we also enjoyed just enough genuine sailing to keep things from feeling tragic. Meanwhile, our ship’s company had plenty of time to settle into a sanguine passage routine. 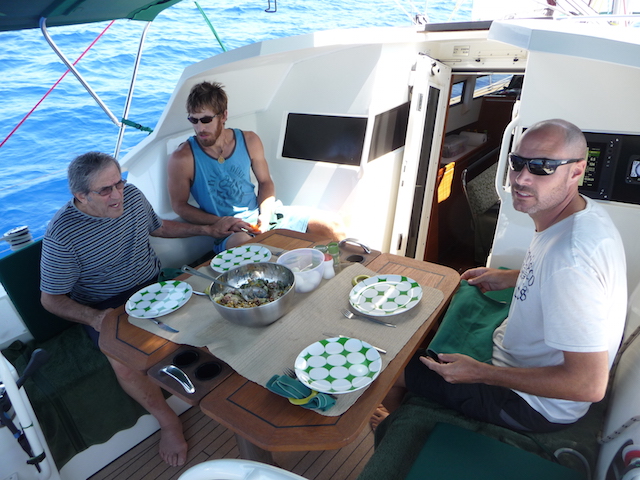 Meals in the cockpit. Jimmy’s big on the communal rituals of feeding and conditions throughout our passage have been perfect for dining al fresco 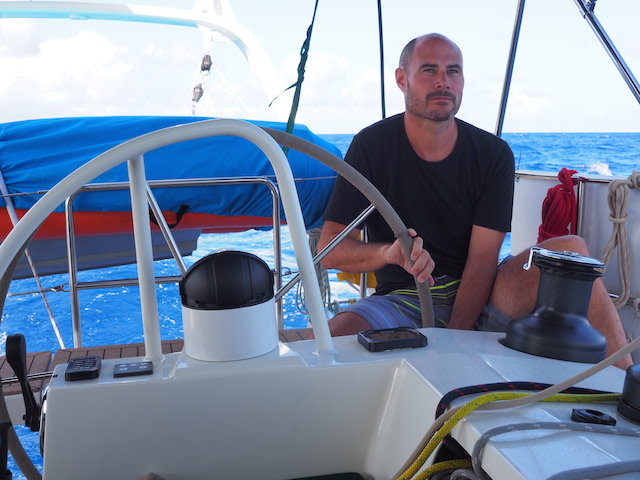 First mate Dunbar Lewis, a native of South Africa, tries hand-steering for a while 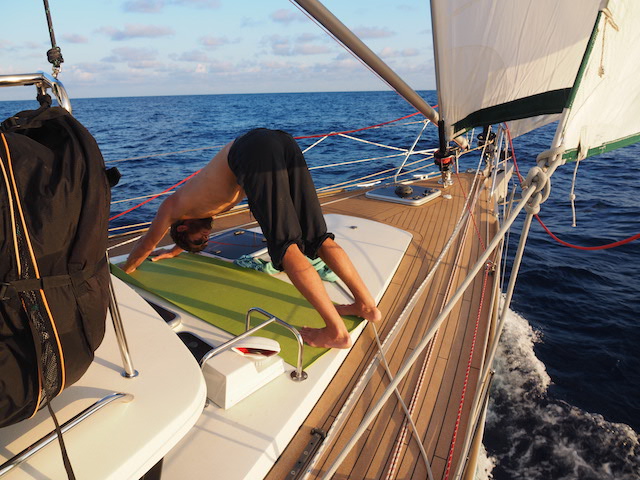 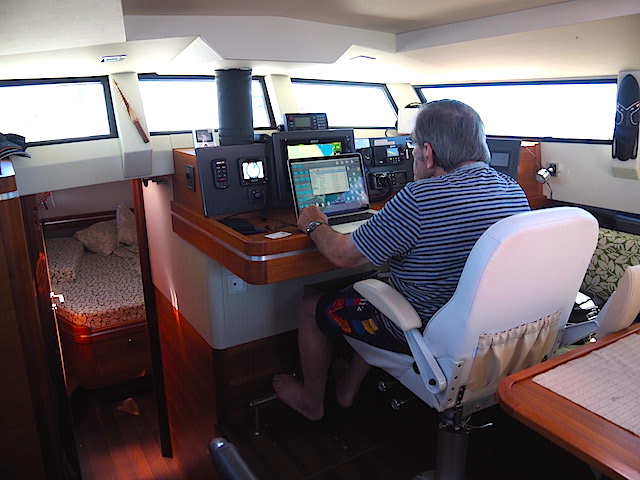 Jimmy’s office-with-a-view. In addition to prearranging a yard haul-out and canal transit in Panama he’s been managing his many interests ashore via satellite 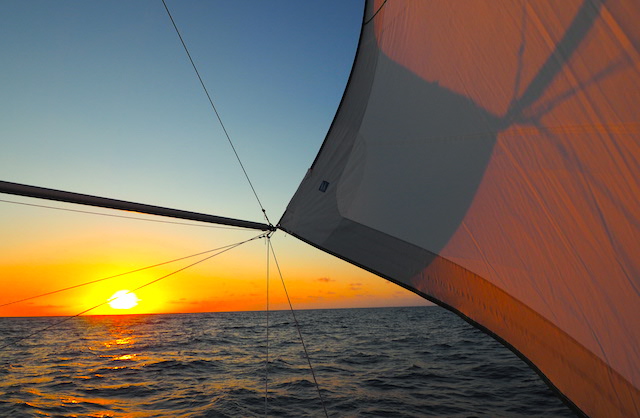 Sunrise without squall line forming (but with jib flying poled out) 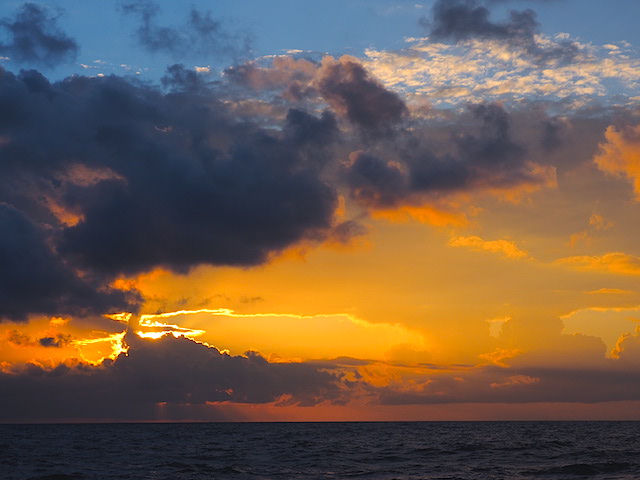 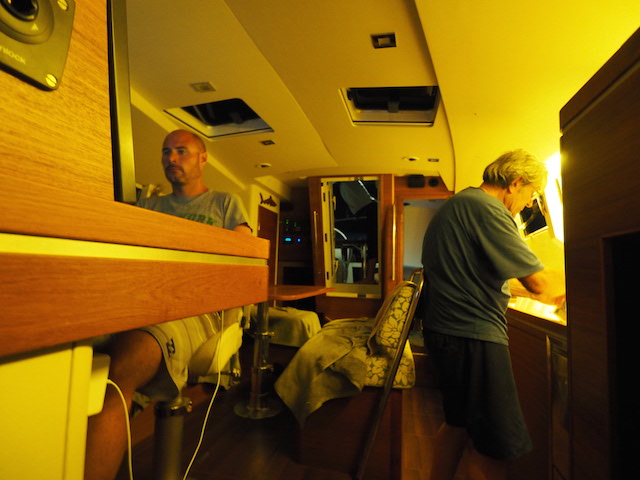 An evening at home, with Dunbar working the nav desk while Jimmy prepares dinner 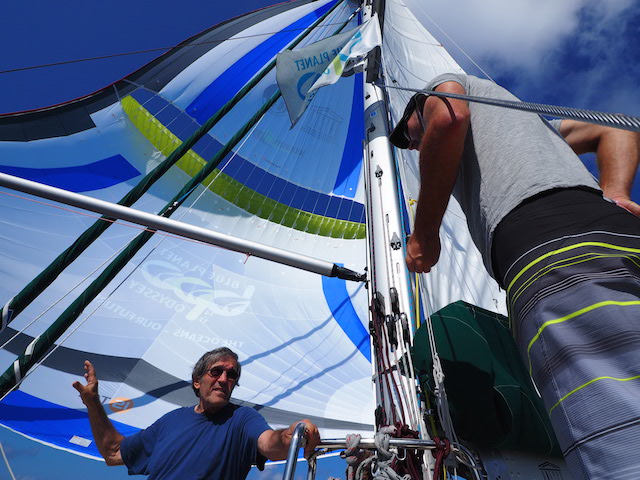 Jimmy holds forth on the virtues of the Parasailor spinnaker, post-hoist 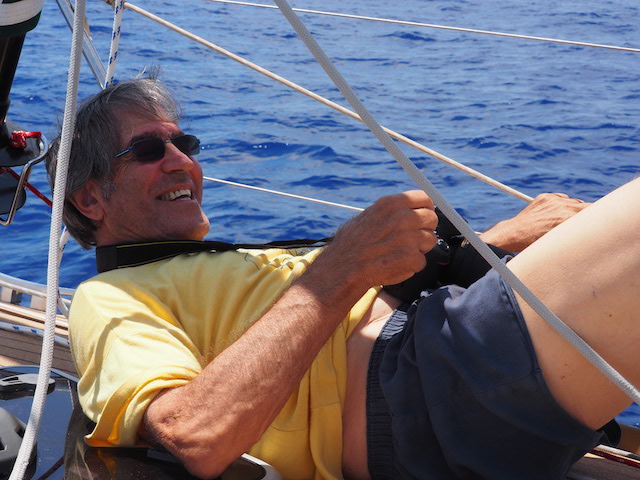 Jimmy shoots photos of Dave at the masthead shooting photos of the spinnaker flying (see, e.g., photo at the top of this post)

We reached the east end of Cuba, Punta de Quemado, and the Windward Passage, just as the sun was setting last Friday, and from there we prayed our long 730-mile open-water jaunt across the Caribbean proper to Panama might at last be favored with normal easterly tradewinds. No, these prayers were not immediately answered, but the Wind Gods did not abandon us entirely. Again we enjoyed a mixed menu of motorsailing and proper sailing, with the wind at least on the port quarter where it properly belongs, until finally just two days ago something like real tradewinds started happening. A nice corrugated sea speckled with whitecaps behind us; streets of puffy white clouds oozing past overhead. 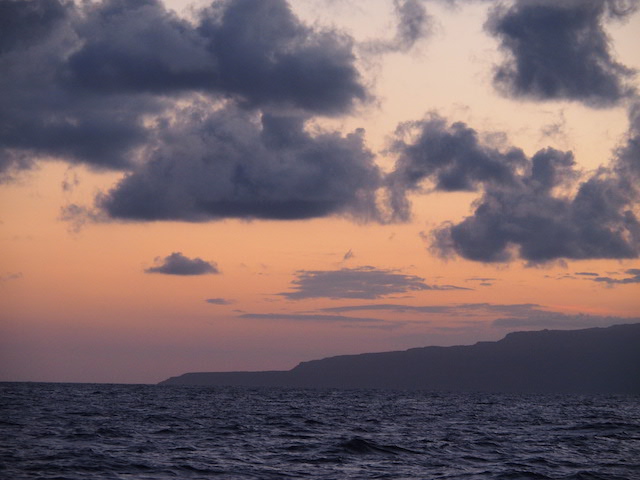 The forbidden island! This actually was the very first time I’ve ever seen Cuba. Of course, I could not help recalling one my very first memories, dating back to the Missile Crisis, when I was sent home from preschool due to the impending threat of thermonuclear war. I couldn’t help noticing, too, how very few electric lights there are on the east end of Cuba after the sun goes down. You can literally count them on the fingers of one hand

All in all, I have to say, I think this may be the easiest longer-than-one-thousand-mile passage I’ve ever done. (Knock on wood, because it’s not over yet.) I haven’t once had to don rain gear, we haven’t once had to reef the mainsail (though we have been doing lots of fooling around with headsails), we have plenty of power and water, and the boat’s motion has never for an instant been uncomfortable.

We have been seeing an awful lot of shipping, probably more than I’ve ever seen before on a single passage, by a factor of three at least. First there were the great fleets of cruise ships we crept through in the Bahamas, in the Windward Passage we had all manner of vessels flying at us from all directions, and now there’s a steady unrelenting stream of commercial ships being spat out at us from the Panama Canal directly ahead, almost all of them on courses perfectly reciprocal to ours. Back in the old days this all would have been perfectly nerve-wracking, but these days, thanks to the miracle of AIS, it is mostly just entertaining.

Of course we have had some technical difficulties. On boats you almost always do, but so far (again, I’m knocking on wood here) they have been very limited in number and severity, as follows: 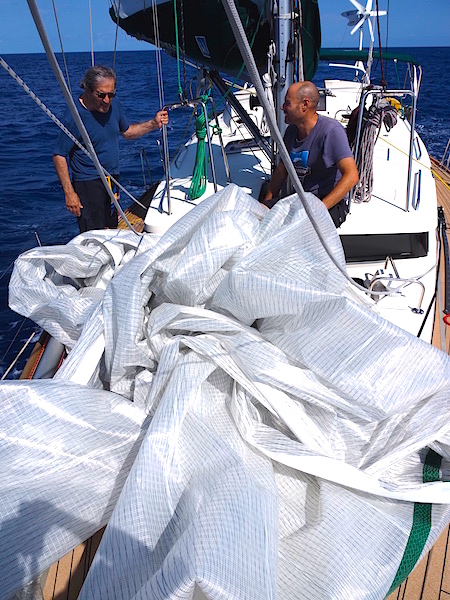 TD #1: All of a sudden our screecher (as I like to call it), or Code Zero sail (as Jimmy likes to call it), fell down in the water as were tearing along at high speed, just seconds after Jimmy and I were discussing how much wind it would take to mess it up. “I’m psychic!” Jimmy immediately exclaimed, almost gleefully, as he’d been saying he thought we were pretty close to its limit. Then we all ran forward to drag it back aboard 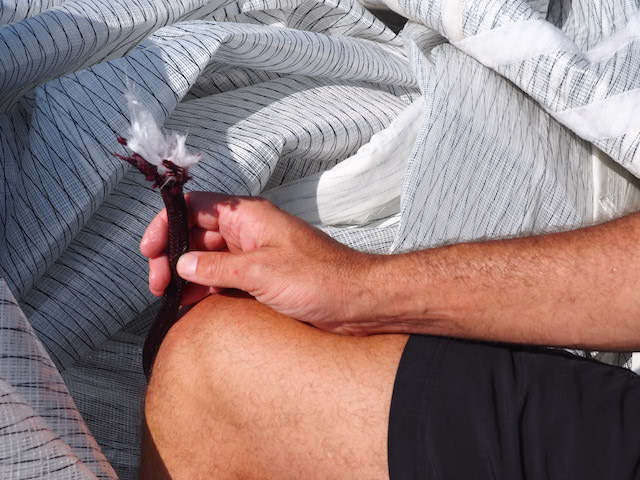 The culprit turned out to be this spinnaker halyard, which chafed through at (or near) the halyard exit on the mast. Fortunately, we have a spare one of these so can still fly our screecher or spinnaker, though we now have been inspecting the halyard on a regular basis 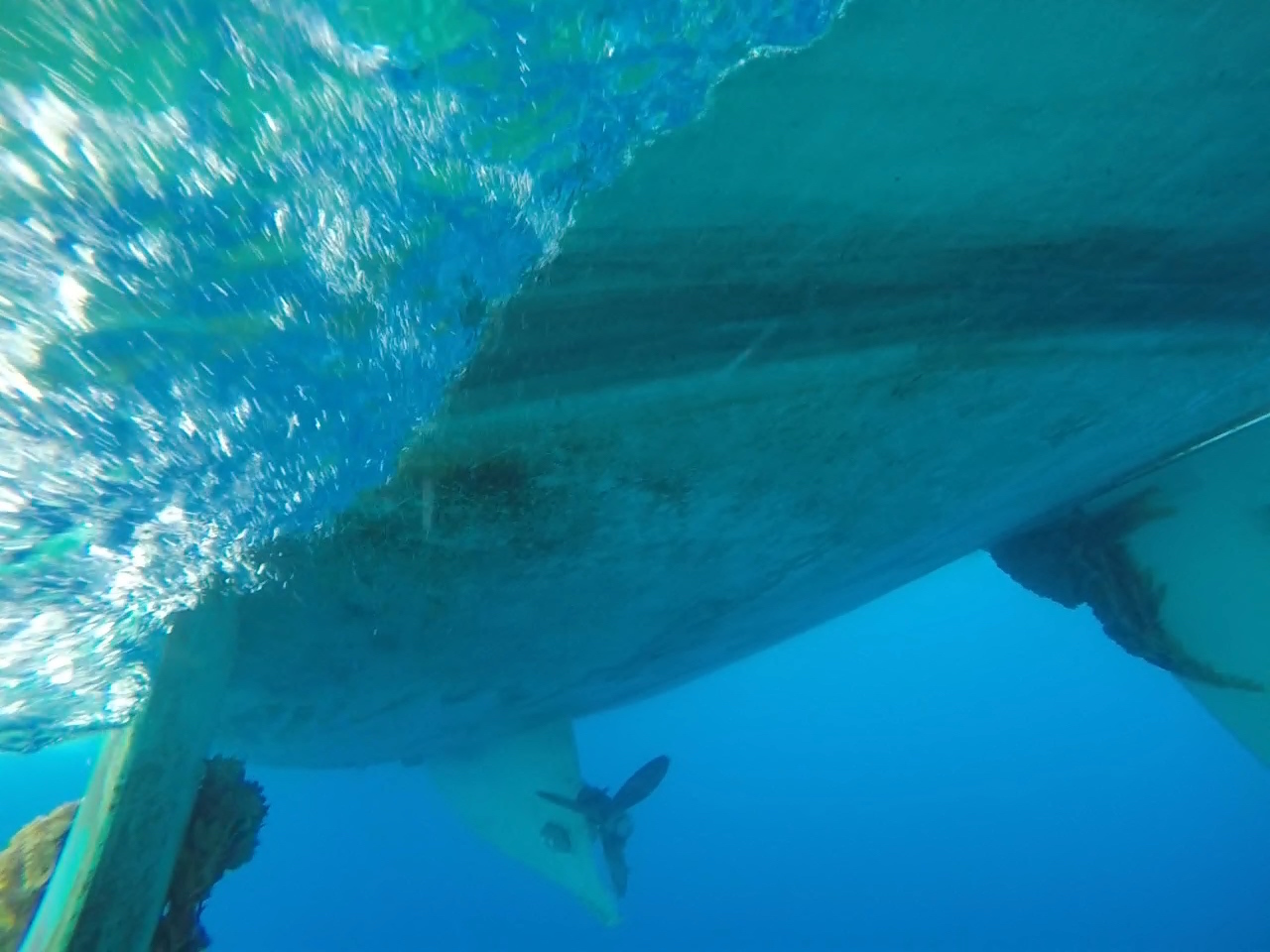 TD #2: Weed on the rudders! This has been a plague in the Caribbean all this season. Sailing down from Bermuda on Lunacy we were crippled by weed on several occasions. I also read that several Route de Rhum boats had problems. Fortunately, our weed didn’t seem to slow us down much, though it did mess up our steering a bit. Fortunately, too, we had a GoPro camera with a waterproof case aboard so we could take pictures of our weed to confirm its existence 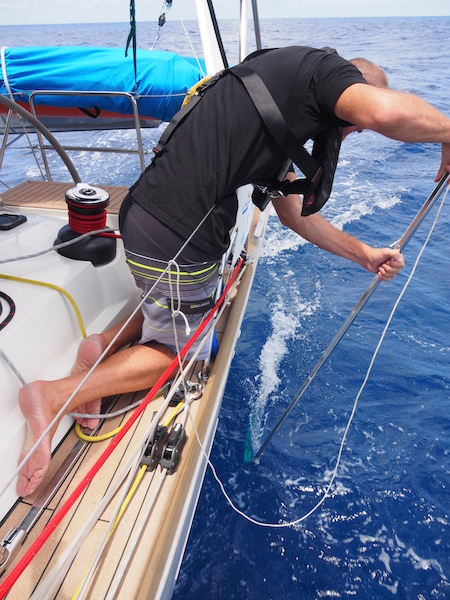 This is Dunbar trying unsuccessfully to knock the weed off from on deck with a boathook pole that has a gaff stuck on the end of it. What worked in the end was we dropped the spinnaker, rounded up under main alone to stall the boat, and the weed then dropped off no problem. So far (knock, knock) we’ve only had to run this drill once 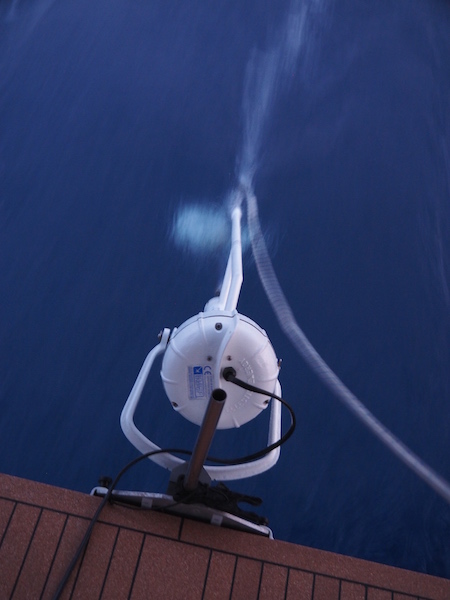 A corollary of TD #2 is that we’ve also been catching weed on this nifty Sail-Gen water generator we’ve been dragging behind us. Very frequently in fact, but it’s easy to clear it off again. Just pull it up out of the water on its leash, the weed falls off, then you drop it back in again. Jimmy tells me this unit is the first one of these built and has been performing very well

Right now, as I’m writing this, it’s Wednesday late afternoon and we are just 62 miles from the canal entrance. We should arrive in the very early a.m. tomorrow, and then job next is to break on through to the other side (to the Pacific, I mean) as quickly as possible.

Stand by for gory details.