Our most recent ruminations on this topic focused on some of the popular dedicated cruising-sailboat designs that dominated mass-production boatbuilding as the industry started growing and maturing through the 1970s. It is important to remember, however, that even as fiberglass production techniques were thrusting sailboats into the heart of the 20th-century consumer economy, some cruising enthusiasts, as always, were determined to stay outside the mainstream. Many of these modern alternative cruisers favored unusual offbeat boats. One of these was James Wharram (see photo up top), who in 1954 designed and built for himself an extremely crude 24-foot plywood catamaran he called Tangaroa.

In company with two young German women, Wharram cruised his unlikely craft from his home in England across the Atlantic to the Caribbean. On a beach in Trinidad, he then designed and built yet another plywood cat, the 40-foot Rongo, to replace the disintegrating Tangaroa, and sailed this new boat with his all-girl crew back to England via New York in 1959. Wharram documented his adventure in various magazine articles and later in a book, Two Girls Two Catamarans (featuring several photos of his bare-chested crew), and thus helped bring the concept of the catamaran to the attention of the 20th-century sailing public. 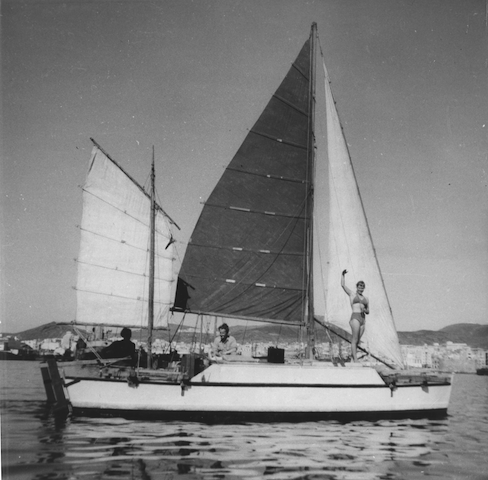 Wharram and crew aboard his first boat, Tangaroa, in the Canary islands en route to the Caribbean

Wharram was certainly not the first Westerner ever to build and sail a catamaran. Eighty years earlier, in 1876, the legendary yacht designer Nat Herreshoff conceived and patented a unique design for a twin-hulled sailboat, Amaryllis, that proved capable of outstanding speed and was soon banned from organized competition. Even earlier, way back in 1662, Sir William Petty designed and built for England’s King Charles II (who, we’ll recall, was an early and very influential recreational sailor) an innovative “double-bottom” yacht that, appropriately, was named The Experiment. 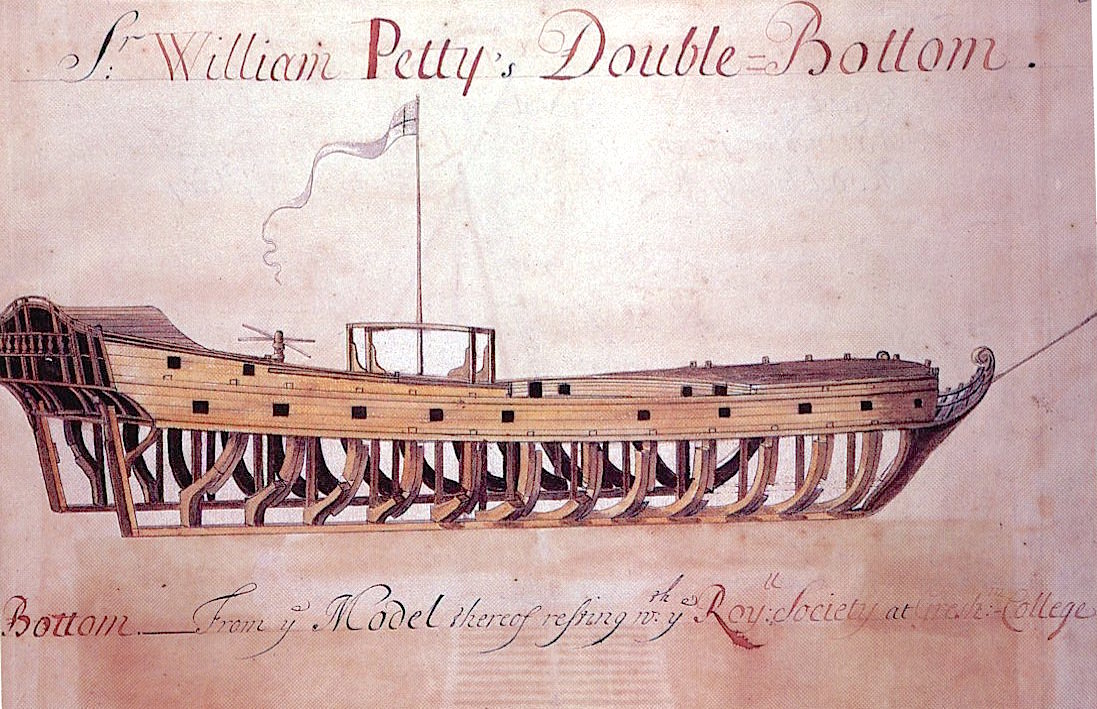 Plan for Petty’s radical 17th-century catamaran. King Charles II did not look upon it favorably

Wharram himself was aware of at least one Western predecessor, the Frenchman Eric de Bisschop, who in 1937 built a 38-foot “double canoe” on a beach in Hawaii and then sailed it to France via the Cape of Good Hope. Indeed, Wharram carefully studied de Bisschop’s book, The Voyage of the Kaimiloa, when designing and building his first boat. But ultimately (like de Bisschop before him) he was more heavily influenced by the Polynesians, who first traversed the Pacific in double-hulled voyaging canoes hundreds of years earlier. (Note that the English term “catamaran” is not Polynesian in origin, but in fact derives from the Tamil term kattumaram, for “bound wood,” which describes a type of raft once used in southeast India.) There were also some other more immediate predecessors, including Roland and Francis Prout in England, Francis “Skip” Creger in California, and Woody Brown in Hawaii, all of whom began experimenting with small beach cats in the mid-1940s. 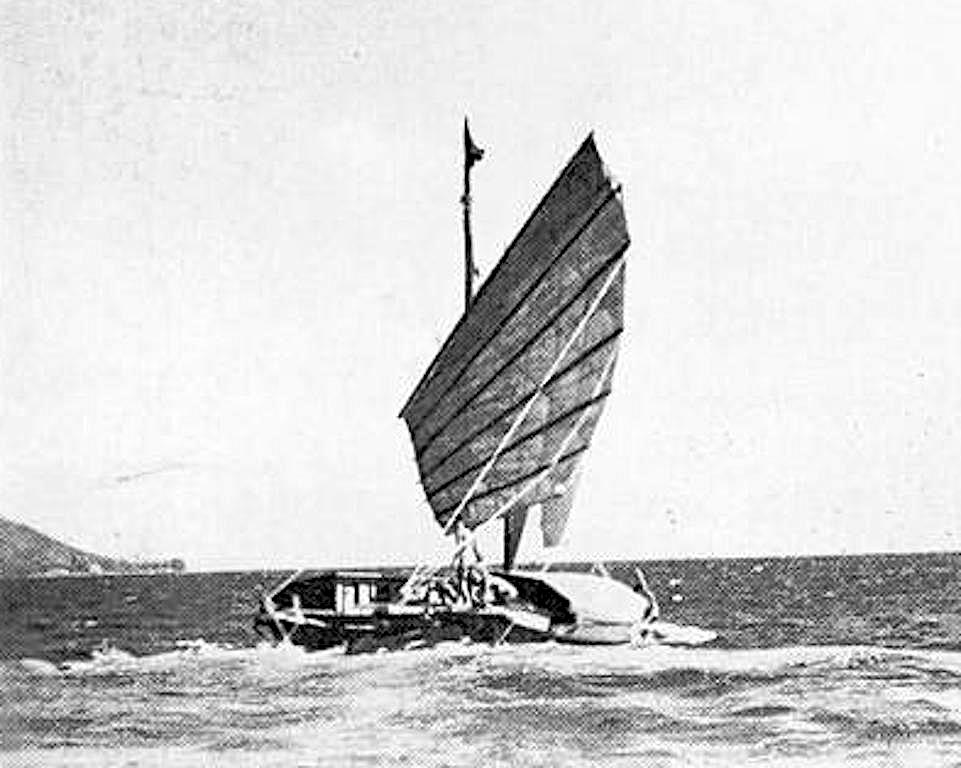 Jim Wharram, more importantly, was among the first to promote cruising not just as a mode of sailing that might challenge certain orthodoxies of the yachting establishment, but as an entire counter-cultural lifestyle that called into question the values of 20th-century industrial society. He was also one of the first Westerners to devote his attention to the creation of larger catamarans capable of cruising long distances. Since the early 1960s, Wharram has generated a large portfolio of build-it-yourself designs, from small beach cruisers to huge “tribal” voyaging vessels, that to this day he sells to others who want to sail away from civilized life on the cheap. Having sold over 8,000 sets of plans to date–half of which, he estimates, have led to the creation of finished boats–he is very likely the most successful and influential designer of build-it-yourself cruising sailboats in history. 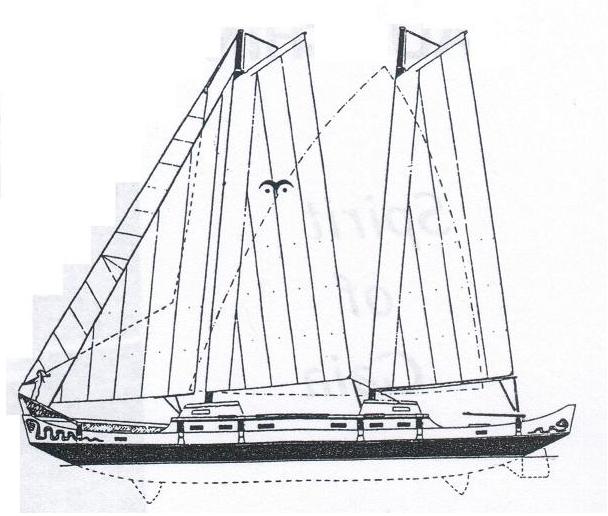 Profile drawing of a Pahi 63, a larger “tribal” design by Jim Wharram

Another visionary who began creating larger multihulls around the same time was Arthur Piver, a retired pilot and trade-journal publisher from California. Piver first designed and built a small 20-foot catamaran in 1954, but soon shifted his attention to trimarans. By 1957 he was selling build-it-yourself trimaran plans (his boats, like Wharram’s, were plywood and thus simple to build). In 1960 he gained some notoriety sailing Nimble, a 30-foot plywood trimaran he designed and built, across the Atlantic from Massachusetts to England.

Piver died at sea aboard one of his boats in 1968 while attempting to qualify for a singlehanded ocean race, but lived long enough to mentor other men–Norm Cross, Jim Brown, and Dick Newick–who also began designing and building trimarans. Newick focused more on performance designs, but most of the boats designed by Cross, Brown, and Piver himself were intended to function primarily as cruisers. All three of these men, though perhaps not to the same degree as Jim Wharram, saw cruising multihulls as catalysts for alternative lifestyles. 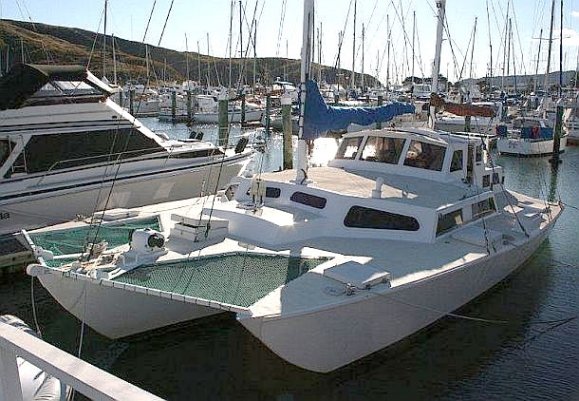 A Victress trimaran, designed by Arthur Piver. Nigel Tetley sailed one of these around the world in the 1968-69 Golden Globe Race. Donald Crowhurst, who came to such a tragic end in the same race, sailed a variation of the same design. You still see some of these boats actively cruising today

The old-school yachting establishment, unsurprisingly, was for many years disdainful of multihulls and the colorful men who created and promoted them. But by this time the yachting establishment had less and less to do with the mainstream of the sport, which was increasingly consumer oriented. As is so often the case, the market did not hesitate to wrap its arms around a product with a counter-cultural image, and by the late 1960s the first fiberglass multihulls were being offered for sale.

The potentially greater speed of multihulls, their larger living spaces, unsinkability, and disinclination to heel under sail were all palpable advantages that were easy to promote to family-oriented middle-class cruisers. The first mass-produced multihull in the United States was evidently a trimaran, the Corinthian 41 (circa 1967), designed by Ted Irwin for Symons-Sailing. Most other early fiberglass multihulls were catamarans built in Great Britain. These included the Buccaneer 24 (circa 1968), Iroquois 30 (circa 1969), Hirondelle 24 (circa 1970), the Snow Goose 34 (circa 1971), and the Solaris 42 (circa 1971). 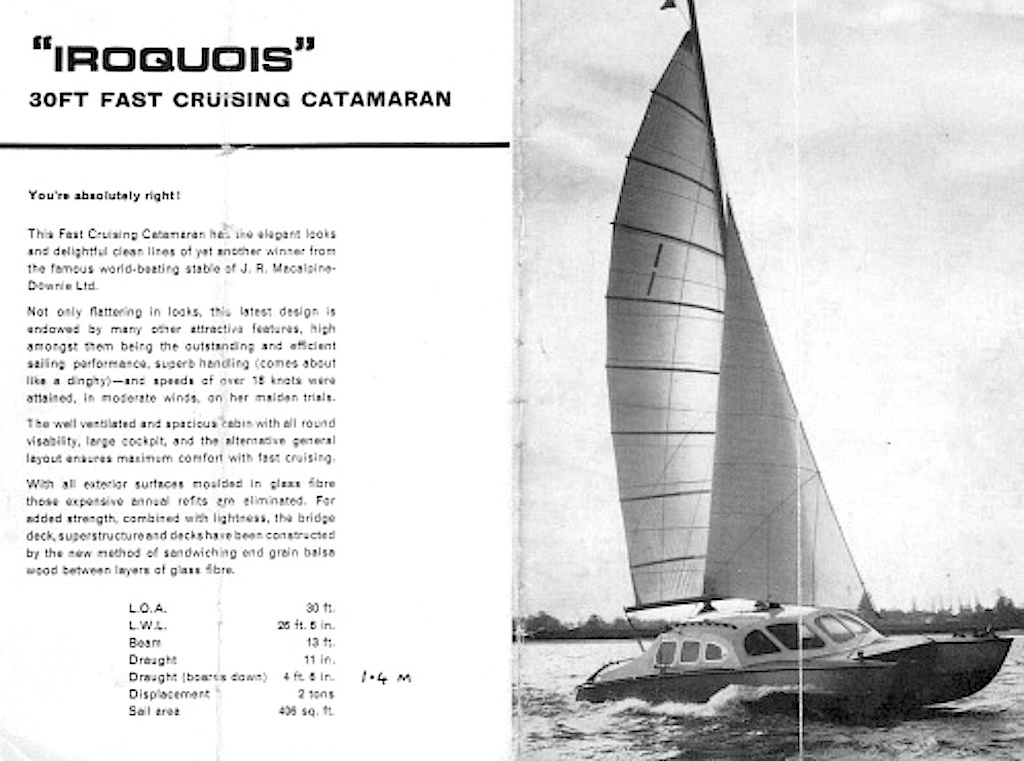 For many years boats like these were more or less outliers in the boatbuilding industry, but over time multihulls, particularly since catamarans started appearing in bareboat charter fleets, have steadily garnered more and more market share.

Other alternative-type cruising boats that began emerging during the 1960s and ’70s were constructed of materials other than fiberglass and wood. These included boats built of metal, most especially steel. The key evangelist here was an iconoclastic French colonial, Bernard Moitessier, who first took to bluewater cruising in the mid-1950s as a way to escape his homeland, Vietnam, which had been engulfed in a bitter anti-colonial civil war.

Moitessier wrecked two wooden boats early in his sailing career, the second of which he designed and built himself, and was stranded in Trinidad when he first considered alternative construction materials. His initial idea for getting away from Trinidad was to build a composite boat of newspaper and pitch on a wood frame, but he set this ambitious scheme aside when offered passage to Europe as crew aboard an oil tanker. Working on the tanker, he spent much time scraping and painting the ship’s steel topsides and concluded, as he later put it, “that a properly built steel yacht could be maintained by a well-trained monkey.” Moitessier, who had spent much time attending to worms and rot aboard his wooden boats, was greatly attracted to the seeming ease of maintenance and the indestructibility of steel as a building material. 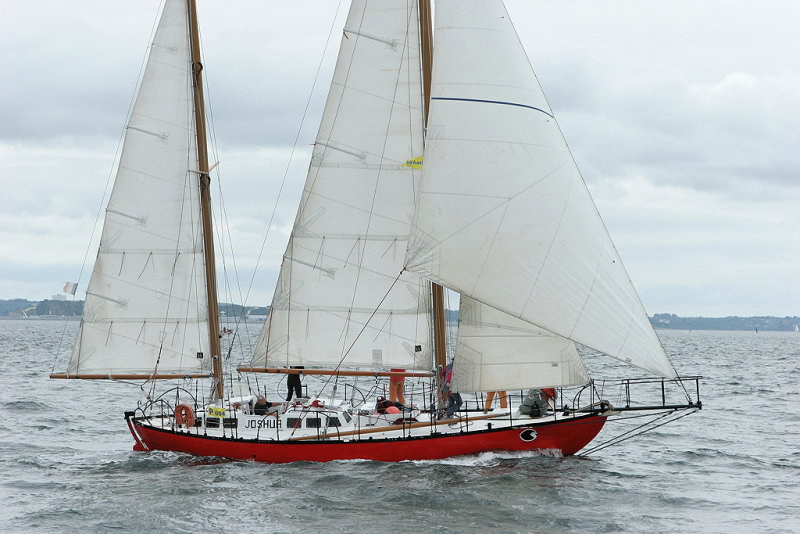 Moitessier’s Joshua under sail. Today she is owned and maintained (and often exercised) by the La Rochelle Maritime Museum in France

In his next boat, Joshua, a rather crude 40-foot steel ketch designed by Jean Knocker and launched in 1961, Moitessier gained an international reputation making record-breaking non-stop ocean passages. The first was from Tahiti to Spain via Cape Horn with his wife in 1965-66. The second, in 1968-69 during the first non-stop solo around-the-world race took him one-and-a-half times around the world singlehanded. These voyages, and the best-selling books Moitessier wrote about them, helped popularize steel yacht construction, which up to that time had been common only in Holland.

Metal construction became particularly prevalent in France, where Moitessier was (and still is) revered. Soon there appeared a variety of designs for steel cruising boats, many of them featuring hard-chined hulls that significantly simplified construction. Aluminum, which is much lighter than steel, was also recognized as a viable building material, and by the mid-1970s one-off aluminum racing and cruising yachts were likewise increasingly common.

Metal boatbuilding ultimately became mainstream in Europe, and this has been reflected in design trends there. The Europeans quickly moved away from the conservative precedent established by Joshua, which had a double-ended full-keel hull form very similar to Colin Archer’s Redningskoite, and soon were building more modern hulls with fin keels and separated rudders. Some production metal-boat builders, notably Garcia and Alubat in France, both of which remain successful to this day, also appeared. 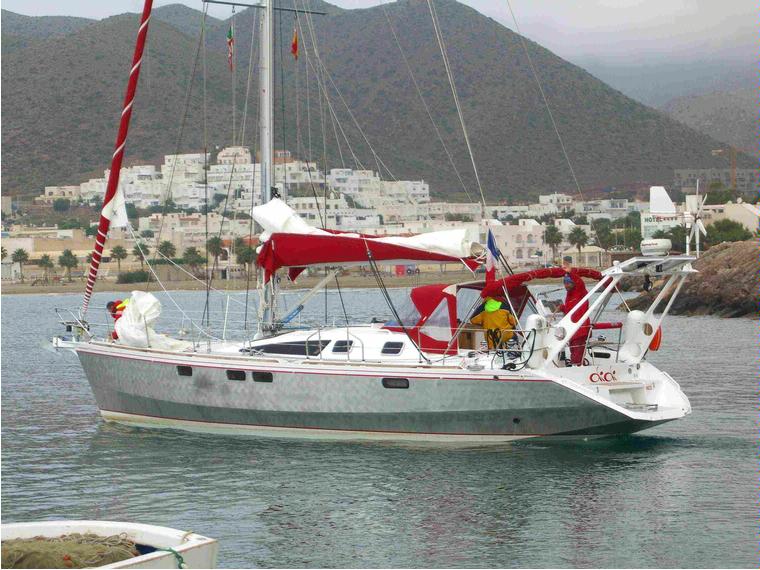 A modern example of a hard-chined aluminum production boat, an Alubat Ovni. The Ovnis are centerboard boats that can easily take the ground

In the U.S., meanwhile, the metal sailboat scene has never been anything more than marginal. With the exception of those developed for aluminum racing boats, American metal-boat designs have favored traditional forms and have been built on a one-off basis, either by custom builders or adventurous build-it-yourself types. Probably the most successful American designer of metal cruising boats has been Tom Colvin, whose work is based largely on working vessels such as pinky schooners, Chesapeake skipjacks, Chinese junks, and other types. His most popular design, the 42-foot Gazelle (of which over 700 have been built), blends the hull of a traditional working schooner with an Asian junk rig. Other American designers favoring metal boats include Ted Brewer, Charles Wittholz, and Jay Benford. 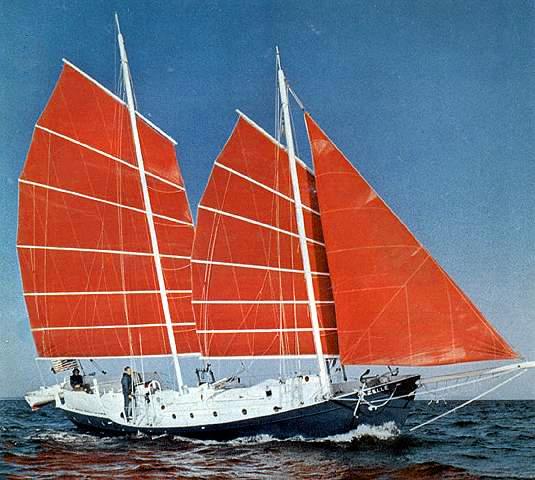 The Colvin Gazelle, an American junk-rigged schooner designed to be built in steel. Several have also been built in aluminum

Ferrocement was yet another alternative building material that briefly attracted the attention of cruising sailors. This technique, similar to that proposed by Moitessier for paper, involved plastering concrete over a frame constructed of wire mesh and steel pipes and rods. Hailed at first as the ultimate do-it-yourself building method because it required no specialized skills, ferrocement was enthusiastically embraced for a short period starting in the late 1960s. 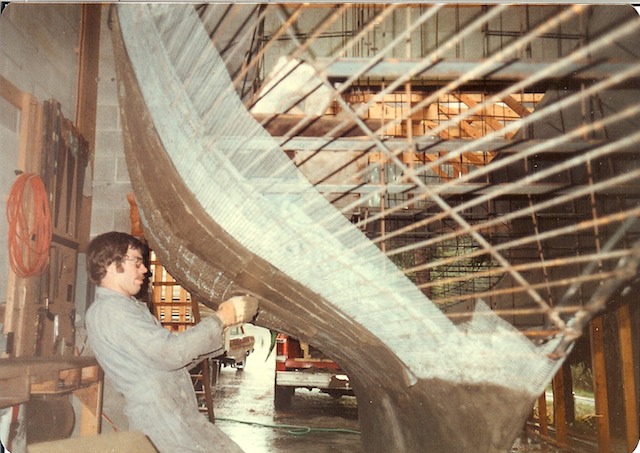 A ferrocment boat under construction. Boats like these were easy for amateurs to frame up, but harder to complete successfully 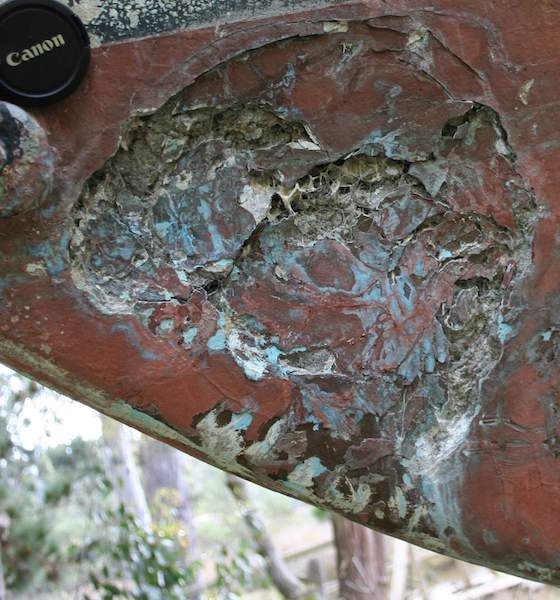 Example of erosion seen in a typical ferrocement hull. Ferro boats are still afloat and are cheap to buy, for just this reason

Eventually, however, it became clear that ferrocement construction in fact does require a great deal of persistence and patience and that construction quality is extremely variable. Improperly built hulls soon exhibited a tendency to disintegrate, and by the end of the 1970s the ferro building craze was pretty much over. These boats were most often built to traditional full-keel designs, as this simple hull form was relatively easy to frame in wire mesh.

Earlier posts in this series:

The Golden Age of the Cruiser-Racer

From Work Boats to Yachts

The Emergence of “Alternative” Cruising 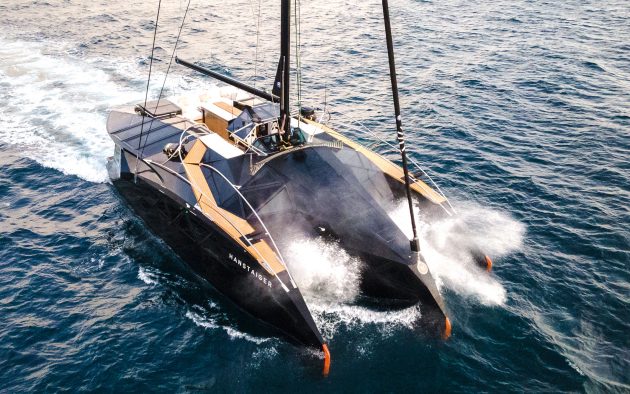