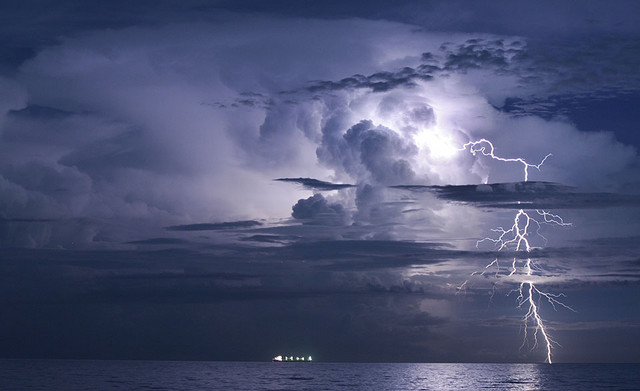 I have to admit I don’t normally think about this too much. As is true of many sailors I suspect, I have subscribed to the philosophy that lightning and its effects are so random and poorly understood that you can get royally screwed no matter what you try to do about it. Which is a great predicate, of course, to going into denial and doing nothing at all. But the death in Florida last summer of Noah Cullen, a most promising young man who presumably was killed in a lightning strike while out singlehanding on his pocket cruiser, got me pondering this in a more deliberate manner. On doing some research, I found there are some hard facts out there that are well worth knowing.

Much of what we tend to learn about lightning is anecdotal, which mostly serves to make it seem more mysterious. I, for example, have never been struck by lightning, but I did once cut through some severe thunder squalls in the Gulf Stream in a grounded fiberglass boat and saw a bolt of lightning the size of a large tree trunk flash straight into the water just a few yards behind us. I can’t begin to tell you why it didn’t hit our nice 55-foot aluminum mast, and ever since then I’ve believed a strike is pretty much an act of God. It’s either going to get you, or not, and there’s nothing you can really do about it.

I have met a number of sailors who have been struck by lightning, mostly in grounded boats, and in every case they told me they lost all their electronics. So I have also always assumed there is nothing you can really do to protect installed electronics from a lightning strike.

But you should forget all the anecdotes you ever heard, at least temporarily, and think about the following:

Likelihood of a strike: It’s probably much higher than you like to think. One source states that a sailboat with a 50-foot mast will on average be struck once every 11.2 years. According to insurance data, the general average for all boats is about 1.2 strikes per 1,000 boats each year.  The average bill for damage is around $20,000. Most strikes are on sailboats (4 strikes per 1,000 sailboats each year). And these are likely lowball numbers, as it seems many lightning-strike victims are not insured or do not report the strikes to their insurers. According to one independent survey, unreported strikes could be as high as 50 percent of the total.

Location is also a big factor. Some areas, including very popular cruising grounds like Florida or Chesapeake Bay, are much more lightning-prone than others, and you are obviously much more likely to get struck when sailing within them. The overall average for reported lightning strikes on boats in Florida, for example, is 3.3 strikes per 1,000 boats each year, nearly three times the national average. 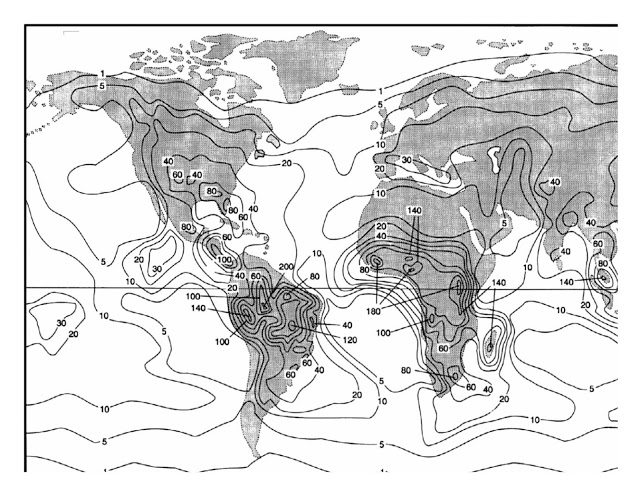 Interestingly, catamarans overall apparently are struck twice as often as monohulls. Could this be because they are effectively twice as much boat???

Preventing a strike: It really isn’t possible. There is no technology that can positively keep your boat from being hit. There’s seems to be little evidence, for example, that those silly little masthead bottle brushes some people put up are good for anything. 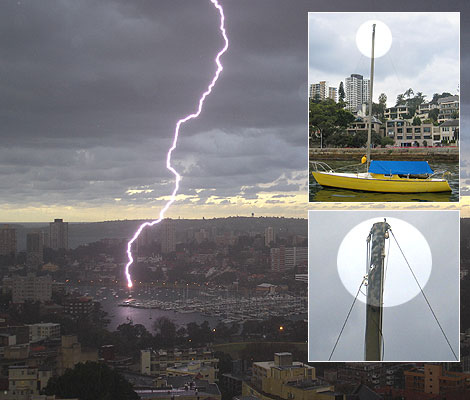 Spectacular image of a sailboat getting hit in Rushcutter’s Bay in Sydney Harbor, Australia, with inset images showing damage to the mast. Lots of other targets with masts around, so why did the bolt hit this one boat?

Limiting damage: This is where the action is. To paraphrase one writer: it is a fallacy to think in terms of “lightning protection.” What you want is “lightning control.” Which definitely means grounding your boat! An ungrounded boat is much more likely to suffer potentially disastrous damage when struck (i.e., holes in the hull, dead crew, etc.). A boat in fresh water is also much more vulnerable, because fresh water doesn’t conduct electricity as well as salt water. An ungrounded boat in fresh water is most vulnerable of all. If you’re on one of these during a strike, you may as well just forget about it and put a cap in your head. 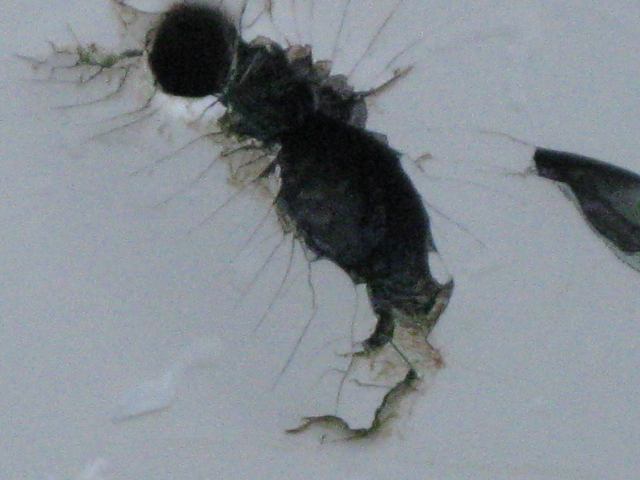 Typical exit damage around an anchor well drain on a fiberglass boat. Hull damage just above the waterline is not at all unusual

Grounding your boat: The old school notion of leading a big copper strip from the base of your mast in a straight line to a single grounding plate on your hull is the process of being discarded in favor of a more sophisticated technique that connects the mast as primary conductor to a network of dissipating electrodes installed just above a boat’s waterline, the idea being in effect to make all of the boat’s hull something like a Faraday cage, so that the equipment and people within will be safer. 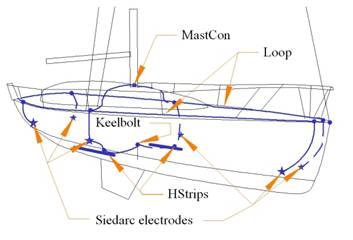 Note (I was particularly gratified to learn this): a metal hull is indeed a great ground, and the fact that it is painted, or coated in epoxy, or whatever, doesn’t change this. But you can still suffer significant damage on a metal boat!

Bonding: You and the gear on your boat are more likely to survive a strike without damage if the major bits of metal on your boat are bonded to the grounding system. This reduces the likelihood of dangerous side flashes. (It does, however, create complications with respect to the potential for galvanic corrosion on a boat.)

Saving electronics: First of all, stowing handheld electronics (or any disconnected electronics) in your oven will protect them during a strike. Just remember to take them out again before using the oven!

More importantly, you can protect installed electronics using various individual surge protectors, fancy spiral wiring, and other techniques I’m not going to pretend to understand, much less explain. See the sources below for more details.

Your personal safety: This should be most important, right? You want to stay off the helm if possible, stay below, stay dry, and don’t touch any big pieces of metal. All of which are easier said than done when you’re in the middle of a big squall! It would seem the most prudent tactic is severely reduce sail, or take it all down, pop the boat on autopilot, and get below well in advance of and after a thunderstorm.

Lightning and Sailboats: Academic paper published by Ewen M. Thomson, currently recognized as the most well-informed go-to guy on this subject.

Marine Lightning Protection: Website for a business run by Ewen Thomson (see above), who is a pioneer in modern cage-style boat-grounding techniques. Thomson will ground and bond your boat for you, if you like, but there’s also lots of useful raw info in here.

Considerations for Lightning Protection: Conclusions reached post-survey by the owner of Domino, referenced above.

Lessons in Lightning: Ocean Navigator article by a cruiser in an aluminum boat who was struck by lightning in the Baltic. Of particular interest to those (like myself) who own aluminum boats.

There are lots of other resources out there, but these four links are a very good place to start. You’ll find many other valuable sources just by reading through these articles and following the links within.